Mayor of London Boris Johnson says 33 major junctions in London described as “Sixties relics” are to undergo a transformation as part of a £300 million project aimed at making roads safer for cyclists and pedestrians.

British Cycling has welcomed the plans, saying they reflect a “clear political vision” that will encourage more people onto bikes.

Meanwhile, London Cycling Campaign says that the announcement "vindicates the actions of the many thousands of people" that have supported its campaigns to make the capital's streets safer for cyclists.

According to today's announcement, 150 cyclists and pedestrians have been killed or seriously injured in the last three years alone at the 33 junctions involved, but often no alternative side-street routes are available, meaning that people on bike or on foot have to negotiate them.

They include a number of locations highlighted by campaigners as presenting particular danger to those on two wheels such as King’s Cross and Bow Roundabout.

At some locations such as Archway, Swiss Cottage, Wandsworth and Aldgate – where French student Philippine de Gerin Ricard was crushed to death by a lorry in July last year – existing gyratory systems will be ripped out and “replaced with two-way roads, segregated cycle tracks and new traffic-free public space.”

At other high-profile locations including Hammersmith and Vauxhall Cross – scene of a ‘die-in’ staged in December last year by the protest group Stop Killing Cyclists – “safe and direct segregated cycle tracks” will be put in place while those locations undergo long-term redevelopment programmes.

Today’s announcement by the mayor and Transport for London (TfL) describes those two locations as “intimidating” for cyclists and pedestrians – very different language to that used by Mr Johnson in November 2011, when he attracted strong criticism from cycle campaigners after he said, “if you keep your wits about you, Elephant & Castle is perfectly negotiable" for cyclists.

The map below pinpoints the locations concerned – we’ve also listed them at the end of this article – and you can find a higher resolution version of it here. 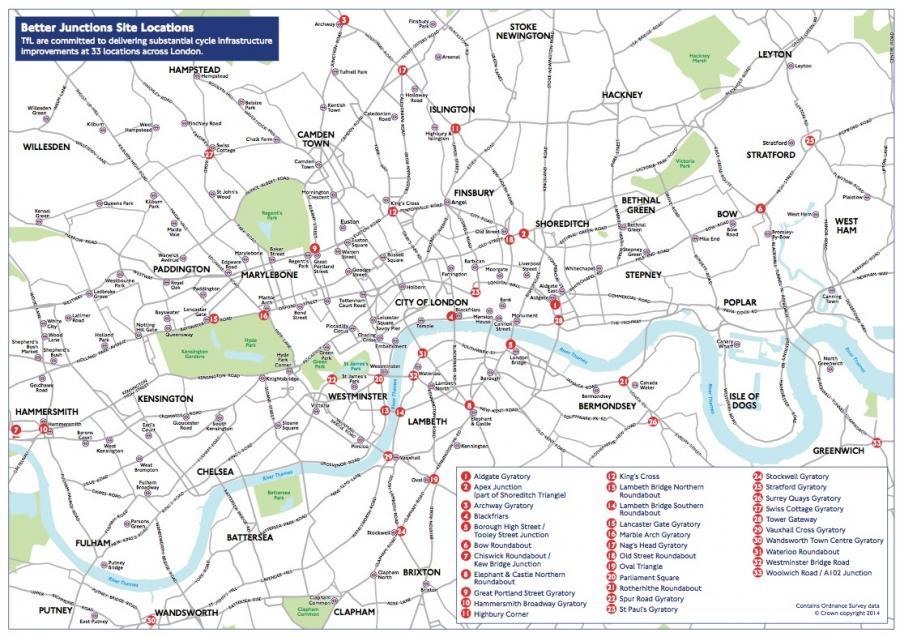 Work is due to start on some junctions in the second half of the year, with detailed designs of the first that will be overhauled set to be made public next month.

Mr Johnson said: “These road junctions are relics of the Sixties which blight and menace whole neighbourhoods. Like so much from that era, they’re also atrociously-designed and wasteful of space.

“Because of that, we can turn these junctions into more civilised places for cyclists and pedestrians, while at the same time maintaining their traffic function.”

According to Mr Johnson and TfL, the proposed changes outlined today reflect a commitment in the Mayor’s Cycling Vision, published last year, to move the Better Junctions programme “away from making minor, often cosmetic changes at a large number of junctions to delivering real and transformational change at the busiest and worst junctions.”

They say that has resulted in a dramatic increase in proposed spending on each location.

When, in the wake of the deaths of cyclists Deep Lee at King’s Cross and Brian Dorling and Svitlana Tereschenko at Bow Roundabout in autumn 2011, plans were announced to overhaul 100 of the most dangerous junctions in London, the anticipated £19 budget would have resulted in £190,000 being spent at each location.

The new plans to increase the budget more than fifteen-fold to £300 million while focusing on a third as many sites means the average spend on each will be £9 million.

The cash to pay for the works will come from a £100 million Better Junctions budget and from the separate Cycle Superhighways budget, both announced in the Mayor’s Cycling Vision, as well as from the general TfL Major Schemes programme budget, plus £50 million “from confirmed third-party and developer contributions.”

According to a timetable set out in the London’s Transport section of a document published last month called Draft Further Changes to the London Plan, the works at the 33 locations covered under the Better Junctions programme are due to be completed by the end of 2016.

Other junctions – such as five on Cycle Superhighway 2, which runs from Bow to Aldgate – that are not within the 33 included on today’s list will also benefit from separately budgeted improvements.

It has also been confirmed that a Dutch-style roundabout that has been tested at the Transport Research Laboratory in Berkshire will be trialled at an unspecified location in London next year.

TfL’s managing director of surface transport, Leon Daniels, said: “For over a year our designers and engineers have been working flat out to develop new junction designs for these 33 locations to completely change how they operate, transforming their areas for cyclists, pedestrians and the wider local community.

“They are some of the busiest traffic intersections in Europe, so this work has been complicated. But we are now fully committed to delivering these junction improvements as quickly as possible, making London safer and more inviting for all.”

Martin Key, campaigns manager at British Cycling, which earlier this month launched its #ChooseCycling campaign, said: "This is yet another example of the transformational difference that can be made when there is clear political leadership to prioritise cycling as a form of transport.

“The Mayor and Transport for London have a clear vision for improving the daily experience for thousands of people who choose to cycle across the capital.

“This scheme to fix the worst junctions brings us one step closer to persuading thousands more people to take up cycling as an attractive and easy way to get around. We'd urge cities across Britain to follow suit," he added.

London Cycling Campaign's chief executive, Ashok Sinha, said: "At last we have a firm commitment, and the funding, to tackle the main barriers to cycling as identified by cyclists in the capital.

"Rapid implementation of this programme will help reduce deaths and serious injuries to cyclists, as well as make our roads safer for pedestrians too.

"We share the Mayor’s view that gyratories blight our capital and removing them will improve quality of life for all.”

Here is the full list of locations, in alphabetical order, of the 33 junctions concerned: