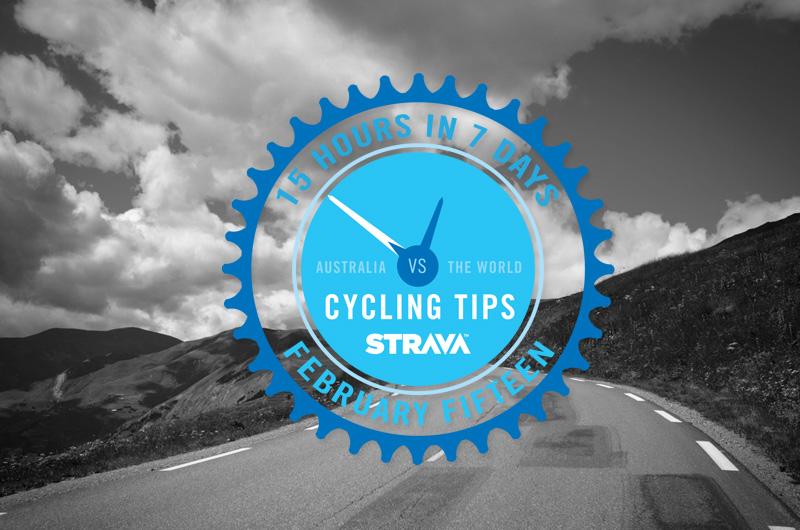 It's the Aussies versus the world - who can log the most hours next week? 15 hours is the goal...
by David Arthur @davearthur

Those Aussies are at it again and think they can take on the World with the return of their February Fifteen Strava Challenge. Sure it's the middle of summer there and we're challenged to ride 15 hours next week from February 24 to Sunday March 2 in this dismal weather, but I'm sure we will destroy them again.

Wade Wallace from CyclingTips said, "I wasn't sure how FebFifteen was going to go last year, but there's nothing the Aussies love more than taking on the rest of the world in competition. As it turns out we got absolutely waxed. But this has got the competitive juices flowing, we're more coordinated this year, and more Aussies are joining in. All we gotta do is get out and ride in this beautiful weather we're having. All ego aside, the point of the whole thing is to motivate people to get out for a massive week out on the bike. No matter who rides the most hours (Australia or the rest of the World), we all win."

Obviously over in the Antipodess Summer's drawing to a close but it's still nice and light and warm, whereas here in blighty we're all still digging out our thickest overshoes and setting off in the dark. Hey ho. Anyway, you need to log 15 hours next week to get your badge, no mean feat. And Cycling Tips will be adding up all the Aussie and rest-of-the-world miles to see who gets bragging rights.

This challenge first ran last year, and of the 6,131 of you that took on the challenge, 1,035 were successful. The real battle though (rather than the personal one) was between Australia and the rest of the world combine. And the rest of the world won. Of the 54,229 hours that were ridden as part of the challenge, only 16,060 of those came from Australia.Pity Australia. You can read the full breakdown of the results over at CyclingTips.

To sign up, head to the Strava challenge page www.strava.com/challenges/cyclingtips-february-fifteen-2014 If you're tweeting or instagramming about your rides, use the hastag #febfifteen. Let's sock it to the Aussies!

Let us know below of you're planning to take part. And if you're not already in the road.cc Strava club, why not?