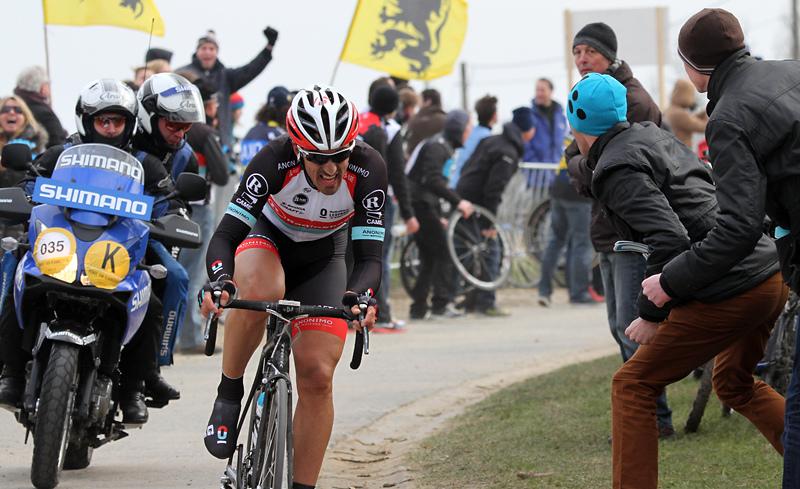 Fabian Cancellara on his way to victory in the 2013 Tour of Flanders (CC licensed image by Brendan A Ryan:Flickr)

Fabian Cancellara set to retire in 2016

'Spartacus' wants to go out at the top of his game, has no wish to carry on into his 40s...
by John Stevenson

Professional rider Fabian 'Sparatacus' Cancellara looks set to retire when his current contract with the Trek Factory Racing team ends. He has once again indicated that he is unlikely to ride past 2016, and has no wish to carry on racing into his 40s.

"I have a three-year contract and then it's over," Cancellara told Barry Ryan of Cyclingnews.com. "I have a three-year contract and in my opinion it doesn't look like there will be a fourth or fifth year because it will be sixteen years as a professional. I don't feel tired although once in a while I feel tired, and that's normal. That's not going against Jens [Voigt] or Chris Horner but you will not see me riding the bike at their age."

Voigt and Horner have been the standard-bearers for long careers, with Voigt still racing this season alongside Cancellara at 42, while Horner became the oldest ever winner of a grand tour when he won the Vuelta a España last year shortly before his 42nd birthday.

But rather than carrying on as a super-domestique, Cancellara, who will be 35 in 2016, wants to go out while he’s still in top form.

"I think of course I will stop on the highest level," he said. "In my situation, I can't wait until I'm down here, that's normal. I could stop now and I would not have a problem to find new ambitions, but I would still miss something. I feel like I'm not finished yet with what I want to achieve. There's still some time left, but there's many options after and I'm not scared of that."

However, he does plan to remain involved with cycling.

"I want to bring something back to cycling," Cancellara said. "I have a few ambitions to bring cycling back to another level, and this will be the next thing I do.

"I think cycling is now somewhere a political mess with all the new things that are coming. We have still this big mess with the races and the rules. I think I will be a strong opinion-maker afterwards. Now it's difficult because I'm still a rider, because when you talk as a rider you get singled out. But when you finish, you're free with what you want to do."

Four-time world time trial champion, three-time winner of the Paris-Roubaix Classic and the rider who has spent most days in the Tour de France yellow jersey without actually winning the race, Cancellara is reported to be planning an attempt on the Hour Record this year.

He was the first member of the former RadioShack team to sign up when Trek acquired the squad’s UCI ProTeam licence last year, but hinted even then that this might be his last professional deal.