German bicycle manufacturer Focus has this week launched a new and updated version of their Mares CX cyclo-cross bike, which is now available with either disc brakes or cantilevers. The frame and fork has been put on a diet, down to a claimed 895g for the canti version and 922g for the disc frame, for a size 56, while the fork weighs a claimed 418g. The disc version of the new frame uses bolt-through axles front and rear. Instead of regular bolt-through axles though, Focus has developed Rapid Axle Technology (RAT), which it reckons better meet the demands of “professional cyclocrossers and roadies for a fast release mechanism”. That wording suggests we might see this rolled out on a Focus road bike at some point. The front uses 100x15mm axle and weighs a claimed 77.1g, while the rear is a 142x12mm and weighs a claimed 63.8g. Regular bolt-thru axles, like those on the Giant TCX Advanced or commonly on mountain bikes, screw into the receiving dropout and rotate clockwise until tight, and the lever locks the axle down. The Focus system is different in that the axle slides in, is rotated until the T-Pin engages with a stopper, and the lever is closed. It’s an interesting design, a smart solution that answers the some complaints that bolt-thru axles are slower to release than regular QRs.

Why have a thru axle, or thru-bolt axle, in the first place? Well, it increases stiffness and security which given the forces acting on one side of the frame from the dis brakes - particularly at the front end - seems like a sensible solution. They've long been a feature on mountain bikes and our guess is we are going to see plenty more of them on disc-equipped bikes of all sorts. The frame is constructed from carbon fibre, even the dropouts are made from carbon too. Focus reckon the new frame is just as stiff as the outgoing Mares, despite the drop in weight. Plenty of modern details feature, including a Press-Fit30 bottom bracket with a 68mm wide shell, a tapered head tube and internally routed cables - compatible with electronic and mechanical groupsets. All fairly standard stuff really. However, Focus does optimise the carbon fibre layup for each size frame. Added details include an aluminium scuff plate on the chainstay to protect the carbon in case the chain drops off the chainring. Brake fittings on the disc version are post mount. Focus has worked in partnership with Magura in testing the temperatures and braking loads of different sized rotors. The testing involved a brake load of 800W, a 140mm rotor produced a temperature of 190°C, while a larger 160mm rotor recorded 170°C. Focus hasn’t released any more detailed information on its findings though. As a result, the frame and fork is only compatible with 160mm rotors. That’s interesting because it’s the same as SRAM’s recommendations for 160mm rotors, but goes against Shimano’s decision for 140mm rotors. Shimano does have some other tech to alleviate heat buildup. There’s only a 30g weight difference between the two rotor sizes by the way. The frame will be offered in six sizes, previously it only offered four sizes. Focus has sized up each bike using strack and reach measurements. It wanted geometry with a constant stack to reach ratio across the size range to ensure the handling is the same across the board. The smallest frame size is a 48cm up to 60cm. The new frame carries a few other subtle changes, with slightly taller head tubes (up from 12.5cm to 14cm on the 56cm frame), a longer wheelbase, higher bottom bracket drop and slacker seat angle. The taller head tube is a result of most of its sponsored athletes adding about 15mm worth of spacers below the stem, so they clearly found the head tube too short. The bottom bracket drop has decreased by 5mm as well, a small but significant change. Focus conducted comparison testing with a group of 20 riders, comparing a 65 and 70mm BB drop. The result was preference for the 65mm drop, which provides a little more pedal clearance through the corners, but a slightly higher centre of gravity. 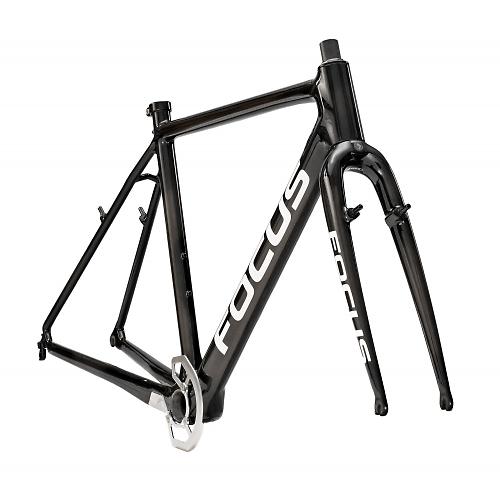 Focus has beefed up the stiffness of the fork with a tapered head tube and the bearing seat is now moulded in carbon to save weight. The fork weighs 418g, that’s for both disc and canti versions. The canti version uses a cable stop mounted to the fork. The addition of ISCG05 mounts around the bottom bracket shell, a universal mounting system for fitting chain guides frequently used on mountain bikes, isn’t something we’re used to see on cyclo-cross bikes, if ever. The chainguide is a plate that sits next to the inner chainring, and essentially sandwiches the chain so there’s less chance of it falling off when you shift to the smaller ring, or riding over very bumpy terrain with the chain flapping wildly about. With SRAM rumoured to be releasing a cyclo-cross version of its popular 1x11 mountain bike drivetrain, this could be a smart move by Focus. You could fit a chainguide with a top guide, replacing the redundant front mech for a totally secure single ring drivetain. The custom Focus chainguide weighs a claimed 48g. So a small weight penalty for the extra peace of mind it should offer. More recently, the company has collaborated with Rapha for the North American based Team Rapha Focus squad, with Jeremy Powers, Zach McDonald and Gaby Day representing the team, and the bike brand, around the world. It’s clear then that racing is still very much a part of the company’s philosophy, and that has driven the development of the new Mares CX frameset. No word on pricing or availability yet. More at www.focus-bikes.com