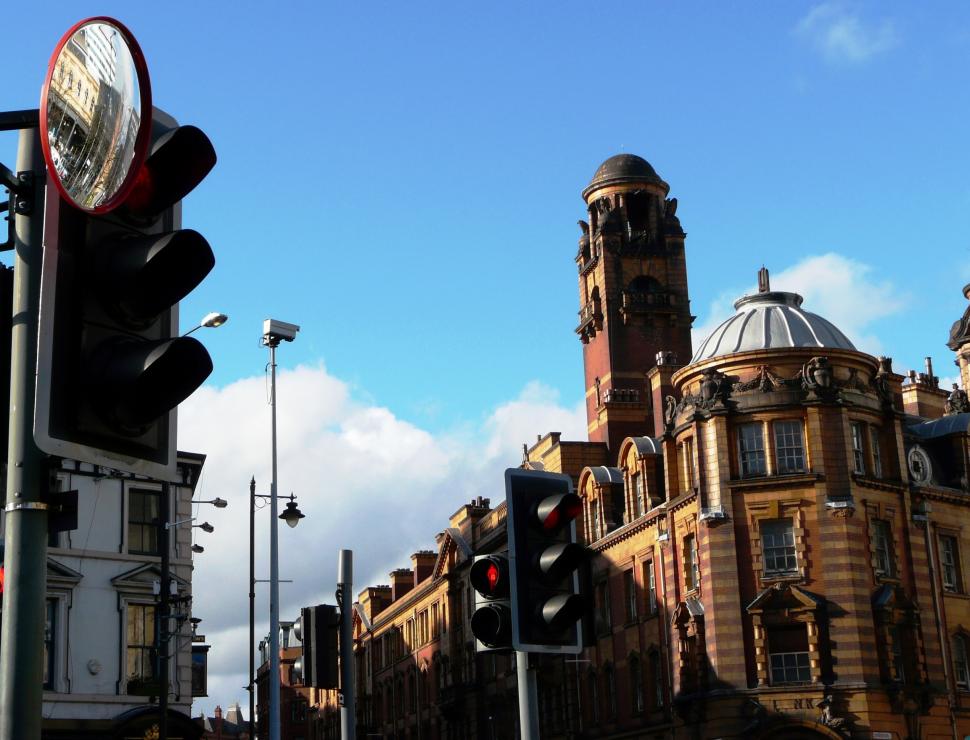 Trixi mirrors are to be installed at 96 major junctions throughout Greater Manchester in a bid to improve the safety of cyclists, including improving their visibility to lorry drivers, a further 112 junctions will get advanced stop lines, and a small number will get both. A total of 176 junctions in total will be upgraded. The initiative forms part of a £650,000 package of cycle safety measures announced today.

The convex mirrors, typically placed high up on traffic lights at junctions with a left turn, were devised by Swiss citizen Ulrich Willburger, who named them after his daughter Beatrix who was seriously injured when she was hit by a cement lorry at the age of 13.

Transport for Greater Manchester (TfGM) says they will be deployed at a number of junctions across the area for which it is responsible, among the 176 locations identified by local authorities where improvements could be made to reduce the risk to cyclists from left-turning lorries.

Other improvements include more advanced stop lines being marked out at junctions, although many bike riders would argue that those are only of benefit if they are properly enforced to ensure that motorists do not encroach on them when traffic lights are red.

TfGM says the money for the initiative has been provided by the Department for Transport's Cycle Safety fund, administered by Sustrans and in this case the Greater Manchester Casualty Reduction Partnership.

It will be accompanied by posters reinforcing to all road users their responsibilities regarding their own safety and that of others.

TFGM Committee’s Cycling Champion, councillor Chris Paul, said: “Any road accident is one too many and any measures we can take to improve cycling safety should be welcome.

“Trixi mirrors and advance stop lines are just a few among many safety initiatives being introduced across Greater Manchester, but they will only help if everyone shares our roads in a respectful, caring way.

“Where we can, Greater Manchester is also investing in traffic free cycle routes, reduced speed zones and developing other measures at junctions to help cyclists.

“We hope that the combination of all these initiatives will not only improve road safety, but encourage more people to consider commuting by bike.”

According to TfGM, in the first 10 months of 2013 there were 472 reported road traffic incidents within Greater Manchester in which a cyclist and another vehicle was involved. It adds that 91 per cent of those incidents took place no more than 20 metres from a junction.

Eleanor Roaf, Sustrans Regional Director for the North West, said: “Fear of traffic danger is the number one reason preventing people from travelling by bike so it's fantastic to see such a comprehensive improvement to safety on Manchester's roads.

“By increasing the visibility of cyclists while also giving them priority at junctions the chance of an incident occurring between a cyclist and motorist is significantly reduced.

“The safer we make our roads, the more people are encouraged to travel by bike and that makes for healthier, cleaner and more prosperous Greater Manchester.”

Under its Velocity 2025 initiative, bolstered by £37 million of government funding between 2011 and 2015 alone, including under the Cycle City Ambition scheme, TfGM aims that 10 per cent of trips in the Greater Manchester area will be carried out by bicycle by 2025.

Initially, it is aiming to build a 56km network of cycle lanes and says that these will be segregated "where possible."

Last year, it unveiled proposed segregated cycle lanes as part of its Bus Priority initiative, which will see some major routes in Manchester City Centre closed to traffic other than buses, taxis and bicycles.

It is also installing 'cycle and ride' facilities at railway stations, provides free training to cyclists, and is also conducting cycle awareness training to bus drivers in partnership with Stagecoach.

1
167 cyclists – and just four drivers – fined in police crackdown during Tour Down Under
2
Van Rysel to launch seven new bikes, including high-end race models
3
The Cobble Wobble – a brutal 179-yard cobbled hill climb – is back after eleven-year hiatus
4
Father and son named as cyclists killed in suspected hit-and-run
5
"Our intention was not to hide these changes": Strava apologises for price hike controversy
6
Driver assaulted cyclist for questioning mobile phone use
7
Cyclist hit by truck driver has compensation cut after judge says lack of helmet contributed to injuries
8
Councillor calls for anti-bike barriers to prevent “dangerous” cyclists “zooming across” foot tunnel