A brand new carbon-fibre road bike with a Shimano Ultegra spec for £2,000
by Mat Brett

B’Twin’s Ultra 920 is a brand new performance-orientated road bike that really impresses in combining frame rigidity with a comfortable ride.

We got the chance to ride the Ultra at the press launch in Valencia, Spain, last week. You can call it a junket if you like, we prefer the term ‘work’. Anyway, we were aboard the Ultra for about an hour and a half up some pretty big hills and down some really swoopy descents. It wasn’t masses of time, but just long enough to form some initial impressions. These are they… 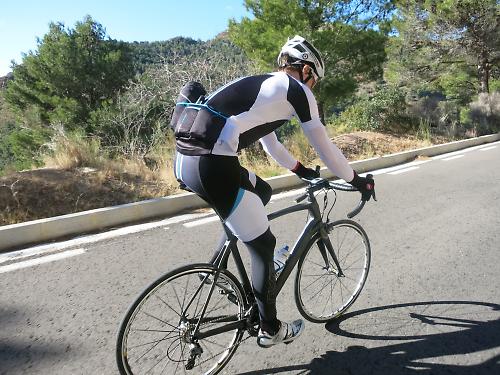 The Ultra is designed for fast road riding: racing, if that’s your thing like, sportives maybe, or just ragging it around the roads with your mates. You know the deal. 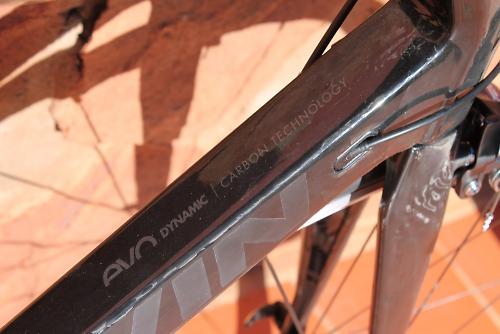 The designers say that the bike has been designed in two halves. The lower part, which they call the Dynamic Structure, comprises the fork (including the steerer tube), down tube, bottom bracket, chainstays, and the rear wheel dropout. They’ve built these elements oversized for extra rigidity and efficiency. 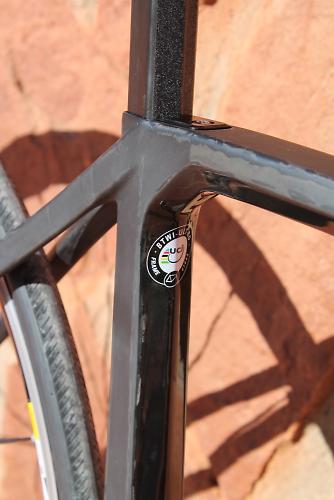 The upper part, consisting of the top tube and seatstays, they call the Supporting Structure. These elements are thin, the idea being to absorb vibration and add comfort.

Obviously, that’s a gross oversimplification, but that’s the basic design philosophy. It actually sounds a lot like Lapierre’s Power Box concept to us – and like B’Twin, Lapierre is a French brand that sponsor’s FDJ.fr, so it could be that there’s a bit of a link there although, to be honest, it’s a fairly standard approach. Anyway, back to the design… 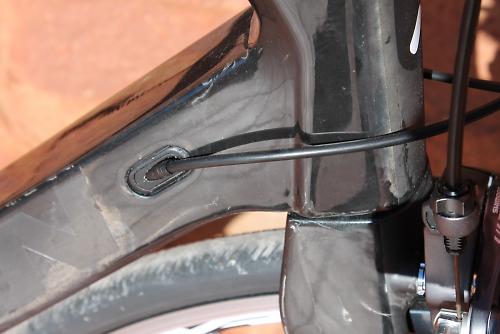 The most eye-catching part of the structure is the monster down tube made from intermediate-modulus and high-modulus carbon fibre. It’s very angular and very large. The head tube is tapered, as is the way on most performance bikes these days – 1 1/8in at the top, 1 1/2in at the bottom – and the bottom bracket is Press Fit with an 86.5mm shell.

Like ever more brands, B’Twin have gone for asymmetric chainstays to take account of the differing forces on either side of the bike, while the seatstays are very skinny by comparison. They’re part of the Supporting Structure rather than the Dynamic Structure, remember. 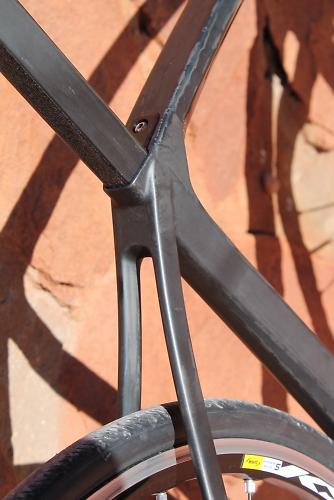 The other thing you’ll notice about the seatstays is that they’re not home to the rear brake. Instead, you get a direct mount brake positioned behind the bottom bracket for improved aerodynamics. That means there’s no need for a brake bridge between the seatstays, so B’Twin do without like Trek, for example, with their higher end Madones. 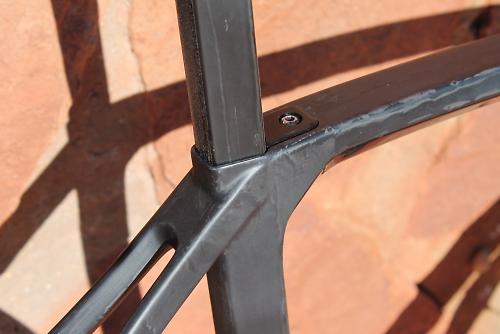 The carbon seatpost is held in place by an integrated wedge-style clamp and the fork is full-carbon. Lke the rear brake, the front brake is direct mount. A lot of manufacturers are switching to direct mount (where each brake arm is mounted to the frame or fork rather than via a central bolt) for extra rigidity and more power. 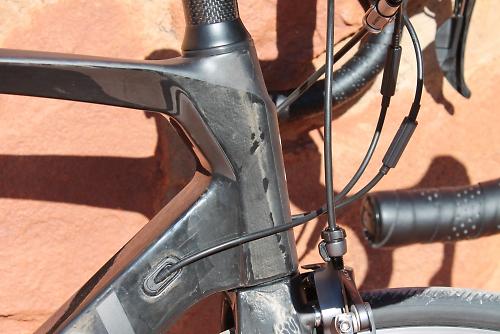 The Ultra’s geometry is race-orientated. I was on a large model with a 57cm top tube, a short but not nuts 17.5cm head tube, and 73/73.5° frame angles… so head-down and stretched rather than sit-up-and-beg, which is entirely appropriate for a bike like this.

B’Twin give a frame weight of 850g for a medium model, and a fork weight of 325g, both of which are very impressive. 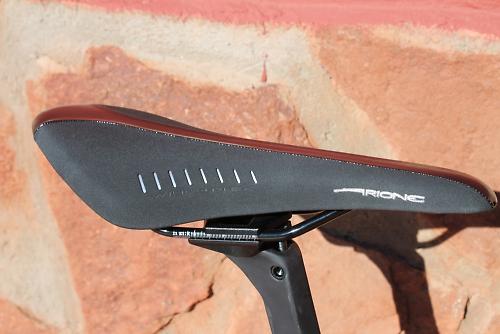 Both versions get Fizik Arione saddles, Deda handlebar and stem, and even Look Keo 2 Max pedals, which is pretty much unheard of – hardly anyone includes decent pedals on high-end bikes. 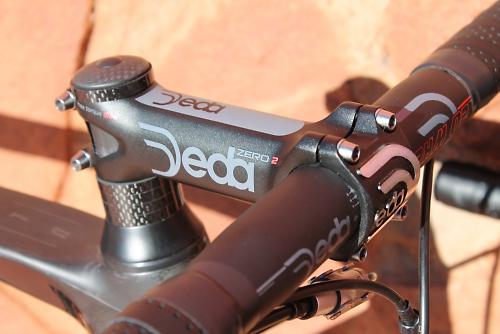 B’Twin were worried that early versions of the new Ultra frame weren’t stiff enough. Based in Lille, they rocked up at the Roubaix track (it’s just down the road; you’ve seen it on the telly at the end of Paris-Roubaix, right?) with a power-based test protocol and a GoPro mounted to the bike to try things out. They added extra layers of carbon one at a time until the Ultra rode as they wanted it to.

The finished bike is certainly stiff, there’s no doubt about that. If I had to give one key feature here, frame rigidity would be it, and that applies to both the front end and to the power-transferring business end. 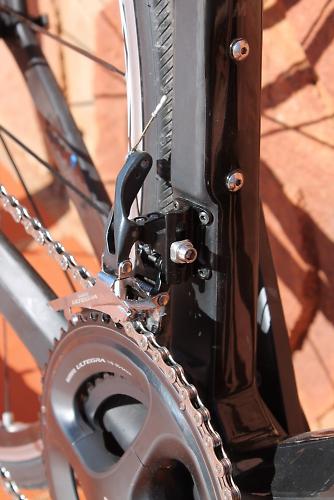 As I said early on, we hit some very twisty-turny descents on our ride, including a few hairpins, and the Ultra handled it all with confidence… even when I didn’t. Nothing vague or untoward there. Good wheels like the Ksyriums (I’ve always like Ksyriums for their stiffness and ability to withstand abuse) help on that score too.

And after the descents come the climbs – that’s pretty much how the world works – and the Ultra performs there too. B’Twin claim a bike weight (size medium, without pedals) of 7.1kg (I can’t verify that because I forgot to pack the scales… again) which is a very good weight rather than an exceptional one, but this bike doesn’t hang about on the hills or even wait to be asked, it just cracks right on. It loves a bit of uphill action. 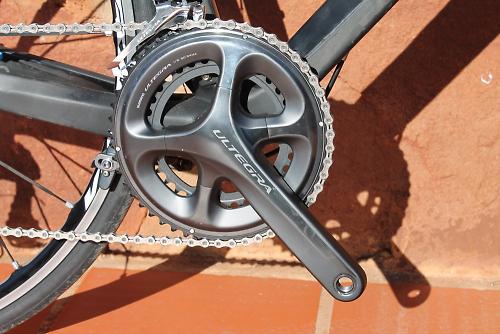 B’Twin spec compact (50/34-tooth) chainsets on both versions of the Ultra, which might sound a bit tame to some big-gear lovers but compacts will keep you moving on just about anything. The cassette fitted goes up to a 25-tooth sprocket but you get a long cage mech that could actually take a 32T if you wanted, which is one of the reasons why B’Twin have stopped fitting triple chainsets to their road range now. 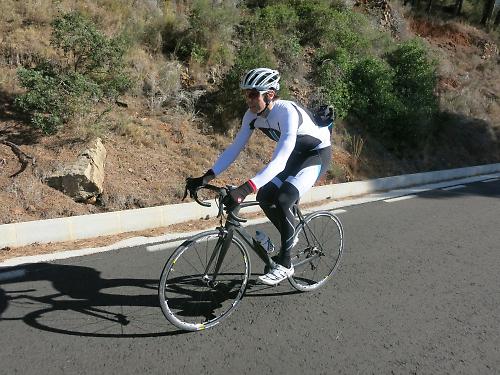 To be honest, comfort is a bit harder to gauge on a ride of 90 minutes over unfamiliar roads. I can tell you that there’s certainly not a lot of judder at the front end, the Fizik Arione saddle is a winner, and the ride feels smooth, but I simply can’t say how this bike would feel at the end of a five-hour stint in the saddle because I didn’t spend that long on it. The indications were good, though. Nothing here made me think that a big ride would be a difficult experience.

I’d say that the B’Twin Ultra 920 is a stiff and light performance-orientated bike with a great spec for the cash. If you have £2,000 to spend and you’re after something that’ll reward your effort with plenty of speed, do yourself a favour and consider this bike seriously. It goes on sale in April at Decathlon stores and via www.decathlon.co.uk.