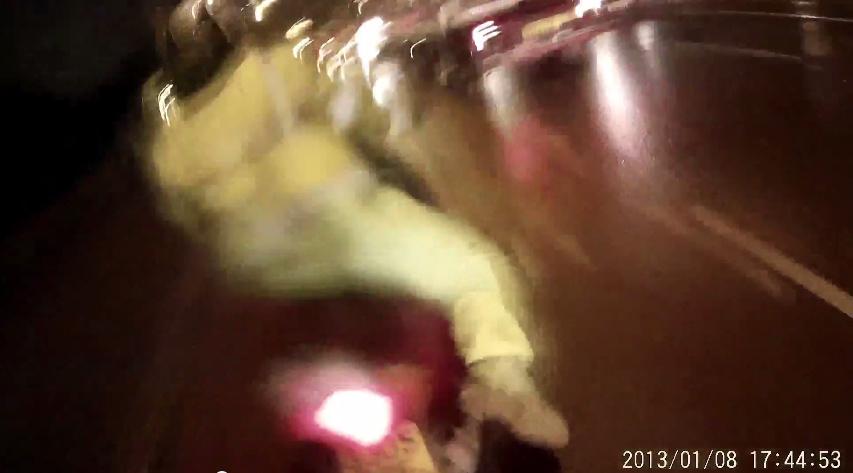 Metropolitan Police say they can't proceed due to lack of independent witnesses - although they were sent helmet camera footaage...
by Simon_MacMichael

A London cyclist who gave police video footage that showed a moped rider kicking out at his bike as he passed him has been told that no action will be taken against the man in question because there were no independent witnesses to what happened.

The incident happened on the New Kent Road on the evening of 16 January as Chi Yong La rode home to Greenwich from his job in the West End with publisher Conde Nast.

Riding away from the kerb to avoid potholes, drain grilles and manhole covers, he exchanged words with a man on a moped who was undertaking him to his left.

As the man sped away, he aimed a kick at Chi's front wheel, leaving the cyclist struggling to maintain balance on the busy road.

"I was really shaken up," he told road.cc following the incident. "I was really holding on for dear life, making sure I didn't topple over."

Chi lodged a complaint with the police, and sent them a video of the incident - like many cyclists, he uses a helmet camera so that in the event of an incident involving a motor vehicle or pedestrian, he has something more than just his own word to fall back on.

The full video he sent to police can be seen here (contains some swearing).

The letter he received from the Traffic Criminal Justice section of the Metropolitan Policer Service's Operational Command Unit for the South East Region, reads:

I am writing concerning your complaint to police regarding the manner in which a motor vehicle bearing the registration mark GJ05FGF was ridden along New Kent Road @ 16:44 hours on the 16/01/2014.

I would advise you that it is the policy of the Metropolitan Police Service to investigate cases that have a realistic prospect of achieving a successful prosecution at court.

In view of the lack of independent witnesses to support your claim, we are unable to initiate proceedings on this occasion. However, the registered owner/keeper of the vehicle has been notified of your allegation and a record of the incident will be kept within this office.

Chi told us that the police response was "disappointing to say the least but I can't say I expect anything more."

One question the incident, and the police's reaction to it, does raise is just how seriously they take helmet camera footage, and why that should be seen as less acceptable than independent eyewitness testimony, which can be inaccurate depending on the person's recollection.

Another is that police regularly appeal to the public for help in catching suspects whose alleged crimes have been caught on CCTV, with no witnesses around, and where the footage is of much lower quality than that typically captured by helmet cameras.

In January 2012 we reported how motorist Scott Lomas was convicted of a public order offence after he threatened cyclist Martin Porter who was riding to work.

The Metropolitan Police only referred the matter to the Crown Prosecution Service after Porter had twice complained about their initial decision not to take action. despite his having provided them with helmet camera footage.

The fact that Porter is a Queen's Counsel, making him more suited than most to negotiating the criminal justice system, is likely to have been a factor in the case reaching its eventual conclusion.