Boardman AiR/TTE in the wind tunnel

Video: In the wind tunnel with Boardman

For 2014 Boardman bikes is bringing out a new time trial bike to succeed the AiR/TT, ridden to victory in the  Kona Ironman triathlon.

Boardman claims that the new AiR/TTE is a whopping four percent faster than the previous incarnation, thanks to ‘holistic modelling’, in which the complete bike and rider is studied, rather than just focusing on the aerodynamics of the bike in isolation.

That’s a huge claim. Boardman says against a rider doing 25 mph on an AiR/TT, his or her clone on an AiR/TTE will cover 25 miles 144 seconds faster, all other things being equal.

This video shows the wind tunnel testing of the AiR/TT, the first part of a two-step measurement process that Boardman undertook to assess the difference between the two bikes.

Chris Boardman said: “The all-new AiR/TTE project has been an exciting project for the R&D team here at Boardman and is an example of our holistic approach to design as part of our >B56 Special Projects Dept.

“We’ve taken the Kona winning AiR/TT and developed the incredible AiR/TTE with impressive results — in a world of marginal gains, four percent is massive.

“This video was taken during a session to gather data for a direct comparison between the original TT and the new TTE. Now onto the next one!”

The AiR/TTE’s gains come from improving airflow over many areas of the frame, among other things.

One of the most striking illustrations of this is the airflow around the stem. The AiR/TTE is on the right in this illustration from Boardman’s computational fluid dynamics modelling. You can see how much cleaner the air flow is.

That four percent improvement in speed comes from some equally dramatic improvements in the frame, fork and stem aerodynamics.

Chris told road.cc: "The frame/fork/bar package alone was actually 14-24% lower drag than the 2012 model but I thought it was unfair to tell people that and stop there. So we did repeat tunnel tests, including the rider. This gave us an average of 7% aero improvement for the rider and bike package (we rounded down not up to get 7%).

"I thought it was unfair to stop there too so we factored in all other possible power uses as well and it equated to a robust claim of 4% improvement in actual race performance. Even for this we rounded down not up, it was actually closer to 5%." 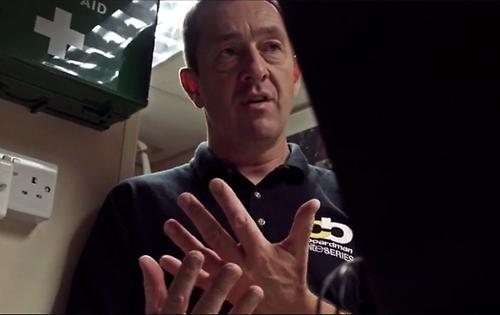 Speed doesn’t come cheap. With Shimano Dura-Ace Di2 and a pair of Zipp carbon clinchers, the AiR/TTE 9.8 will put a £9,000 hole in your bank account. But it’s okay: you’ve got until April to save up, sell a kidney or put your children on eBay.