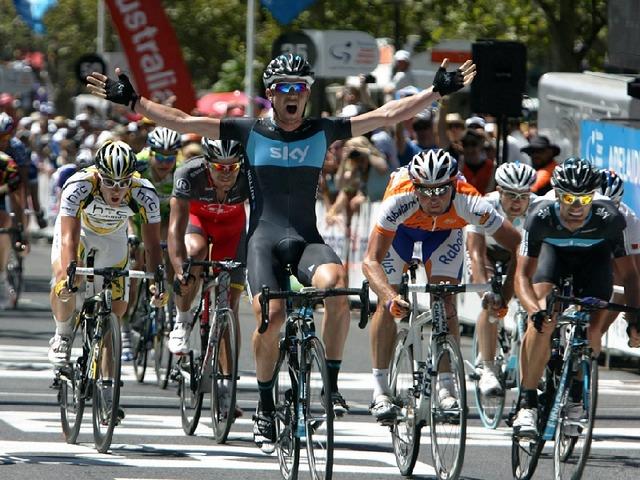 Tour Down Under bush fires threat recedes, but crash rules out Visconti and Sutton

Tomorrow’s opening stage of the Santos Tour Down under will go ahead as planned after the threat of bush fires in the Barossa Valley receded – but Movistar’s Giovanni Visconti and Sky’s Chris Sutton will both be missing as a result of injuries sustained in yesterday’s People’s Choice Classic.

The fires, ignited by searing temperatures in South Australia last week, had caused organisers to warn at the weekend that the opening stage might have to be cancelled.

However, race director Mike Turtur said today that the race would go ahead as scheduled, although they will continue to liaise with the emergency services.

"Obviously, this advice might change subject to the conditions and we will continue to be guided by the advice we receive from the Country Fire Service and South Australian Police,” he explained.

"But our advice is that the race route and the towns through which the race will travel are not in the fire area and it is safe for us to continue as planned."

“Our thoughts are with the people affected by the fires but we urge cycling fans to help them through this by supporting the local economies of the region,” he added. “Spending money in the shops and restaurants will help in the recovery for the area.”

Sutton, who in 2010 secured Team Sky’s first ever WorldTour win when he claimed the closing stage of the Tour Down Under, got back on his bike to take fourth place in yesterday race, won by Giant-Shimano’s Marcel Kittel.

But an x-ray this morning confirmed that the 29-year-old, known as CJ and the nephew of former Sky head coach Shane Sutton, has fractured his wrist.

He aims to be back for next month’s Tour of Qatar.

“It’s a massive blow not to be continuing on with the lads because they did an incredible job for me last night," said Sutton, quoted on SBS.

"My groin and my knee were pretty sore in the race but it was only afterwards, on the way back to the hotel, that my wrist started hurting and I couldn’t grip the handlebars.

“I’m trying to stay upbeat and looking forward to the Tour of Qatar now. That should be my first race back and I’ll have a week or so on the turbo before getting myself back on the road.

“In the meantime, I’ll be staying within the team during the Tour Down Under an cheering the lads on."

His place will be taken in the Sky line-up for the race by the team’s Australian new signing, the 25-year-old Nathan Earle, who will make his WorldTour debut.

Sutton said: “We couldn’t have wished for anyone better to come in.

"Earle showed at the Nationals he’s riding really well and good on him for coming into the group at such short notice.”

The 31-year-old sustained a compound fracture of his right tibia and had a pin inserted in his leg during an operation at the Royal Adelaide Hospital, reports News.com.au.

“There was a stupid crash in front of me and I went a little bit wider to try to avoid it,'' said Visconti.

"A rider slipped beneath me and he hit the advertising hoarding which he destroyed.

"I was thrown over his bike and my leg was caught under the iron barrier.

"I hit the barrier and then I saw bone ... it was sticking out of my skin,” he recalled.

"I needed water because I was close to fainting, that corner was very tight I had nowhere to go.

"But I can't remember the riders in the crash."

Initial fears were that Visconti might miss the entire season.

However, he is hoping to be back training within eight weeks.

"I want to be ready for the Giro but if not the Tour de France and the Vuelta Espana are definite goals,'' Visconti said.

"I was planning on a very good start to the year.

"This is my third Tour Down Under, I first came here in 2005 and then last year and I have always enjoyed it."

Visconti also revealed that he had received a phone call from Alessandro Ballan, sacked by BMC Racing last week after being banned for two years due to his links to the Mantua anti-doping enquiry.

Former world champion Ballan raced just 16 days last season after suffering multiple injuries in a training crash in Spain a little over a year ago.

"I was really happy to hear from my family and all the other riders that have talked to me about recovering quickly,'' Visconti said.

"And the call from Ballan, that made a big impression on me.

"He's having his own troubles and he just told me to remain strong.

"I'll be defiant, so will he [Ballan]. This won't beat me," Visconti concluded.