Morvelo and Chickens Frame Emporium collaborate on a new bike

Brighton based cycling outfitters Morvélo and Sussex frame-builder Jon Chickens have banged their creative heads together to produce this new CityCross cyclo-cross bike. The brief for the Chickens x Morvélo CityCross was to bridge the gap where cyclocross stops and mountainbiking begins, with the speed of a road bike and the playfulness of a BMX mixed in too. A bit like the criteria that went into creating the innovative CityCross race series that used the historic Peace Hall in Halifax late last year to produce an unforgettable event. It’s a bike that’s designed for speed but built for the abuse of hurtling down steps, over jumps and down drops, Urban CX at it's most exciting. Morvélo reflect the way modern cyclo-cross bikes are transforming to echo the fact that riders are doing much much more with their CX bikes now than ride them around the edge of some football fields on a Sunday morning, something they highlighted in their Ride Everything video. Here’s the result, the handsome lovechild of a traditional cyclocross machine getting dirty with a modern 29er mountainbike. Jon Chickens learnt his craft at Enigma Bicycles where he worked for a year and a half before he became a framebuilder under his own name, which is actually Jon Aston but he has a few chickens. Here’s a thing about Jon, a few chickens, and some bikes.

Jon has been putting steel tubes together professionally for four years now and works from a shipping container right on the South Downs. He’s also a trained astrophysicist if you fancied a chat about lesser things than bicycle frames. The CityCross frame is made from Columbus Life steel with a tapered head tube into which is slotted a Whisky No.9 Carbon fork. The fork has a Bolt-Thru axle, possibly the next big thing in cyclo-cross bike design now that disc brakes have taken hold, and a development we first saw on the new Giant TCX Advanced. 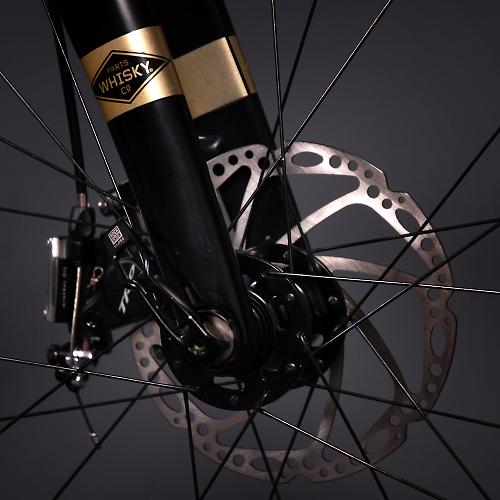 To cope with the abuse that Morvélo are going to be dishing out the wheels are carbon Reynolds 29er mountainbike ones with Maxxis Raze clincher cyclo-cross tyres levered on. To match the multiple personality of the bike the componentry is a similar mash up, SRAM road shifters are mated to a 10 speed SRAM Type 2 clutch rear mech which when chained up to the Absolute Black Thick/Thin CX specific chainring negate the use for either chainguards or a bolt on chain guide to stop the chain bouncing off. Tidy. TRP HyRd cable actuated hydraulic discs handle the braking, when you’re doing the kind of riding that Morvélo imagine on this bike you’ll want something that’s going to stop you rather than the quaint “slowing down a bit” conventional cyclo-cross brakes give you. The HyRd’s have got to be good, they make our Top Cycling Products of 2013-14 list, twice. Here's the full spec list, for thos that ike that sort of thing.. 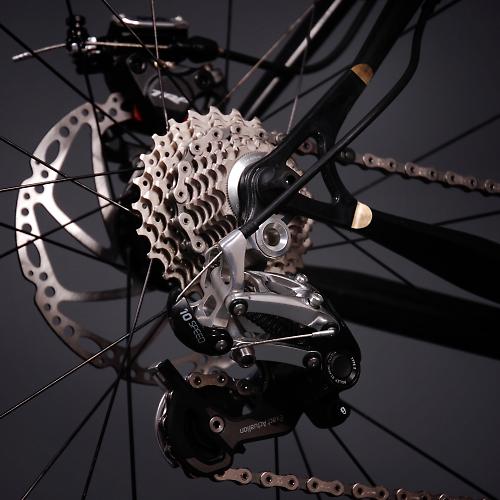 Then it comes to the most important bit, the appearance. Morvélo wanted it to have an essence of some of the 1980's BMXs they loved so much and Jon wanted to showcase the quality of his workmanship by keeping the filet brazing exposed. The happy result of this mix is a black and gold beauty (readers of a certain age will also instantly be reminded of the JPS Formula 1 livery, or a Raleigh Record Sprint maybe) with the stenciled graphics colour matched to the brazing. If this gets your thighs excited then a similar frame from the hand of Jon Chickens will set you back £1200.

1
Cyclist who killed London pedestrian jailed for two years
2
Pick-up driver who crashed into group of cyclists charged with murder
3
German Olympic cycling coach caught on TV making racist comment during men’s time trial
4
The new LoreOne is definitely the most expensive bike shoe you’ve ever seen
5
Pro launches £600 Vibe Evo integrated handlebar, along with new Stealth Curved saddle
6
Near Miss of the Day 618: Morrisons lorry driver in close pass on two cyclists (includes swearing)
7
Near Miss of the Day 619: Close pass followed by punishment pass gets driver a “stern talking to” from the police – and nothing more
8
Jacob Rees-Mogg used racist term in House of Commons during swipe at “lunatic” cycle lane plans