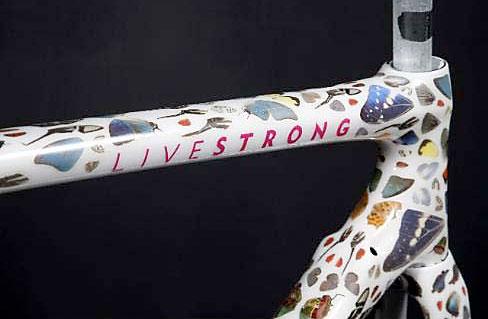 The Damien Hirst-designed ‘Butterfly Bike’ ridden by Lance Armstrong during this year’s Tour de France was the star lot at Sotheby’s in New York last night, the hammer falling at half a million dollars.

As well as the Hirst bike, which Armstrong rode on the Champs Elysées during the Tour’s final stage, six others used by Armstrong during his comeback season were also auctioned, raising $1.3 million for the Texan’s Livestrong charity.

Jamie Niven, Vice Chairman of Sotheby’s and son of actor Sir David Niven, ran the auction and, after an introduction from Armstrong, the Trek Madone customised by Hirst with real butterflies, a recurring theme throughout the artist’s work, was the first item up for sale.

Armstrong kept his followers on Twitter updated throughout the auction, and his excitement was palpable as he tweeted that the bike had gone for “for 500,000.00!!! Half a million bucks!!!”

The time trial bike designed by Keny Scharf that Armstrong used during this year’s Giro d’Italia was next up, going for a more modest $45,000, which turned out to be the lowest winning bid of the evening.

Another time trial bike followed, this one ridden at the Anecy time trial during the Tour de France and designed by the Japanese artist Yoshitomo Nara. Bidding closed at $200,000, which proved to be the second highest winning bid of the evening.

The next lot to sell was the Shepard Fairey-designed bike in Livestrong’s signature black and yellow that first appeared at the Giro d’Italia, which fetched $110,000, leading Armstrong to tweet, “this is insane.”

The cancer survivor said he was “stunned” at the $160,000 achieved by the next lot, another yellow and black Madone designed by KAWS that made its debut in the Milan-San Remo. It was also the bike being ridden by Armstrong when he crashed and broke his collarbone during the Vuelta Leon y Castilla, leading to it being fondly nicknamed “the widowmaker”.

The last of the custom-designed bikes, was a Trek Speed Concept time trial machine by Australian designer Marc Newson with a special design on the rear disc that seems to pulsate when in motion – although whether, at $110,000, it will ever be taken out on the road appears unlikely.

The final lot of the evening was the ‘stolen bike’, which attracted worldwide attention when it was taken by thieves from a team van in Sacramento during the Tour of California last year. That one went for $130,000, and Armstrong said that the total amount raised was “so incredibly humbling”.

It’s not yet known whether any of the bikes have been purchased with a view to being displayed to the public, but the six artist-designed bikes can still be viewed online at /www.trekbikes.com/us/en/stages.