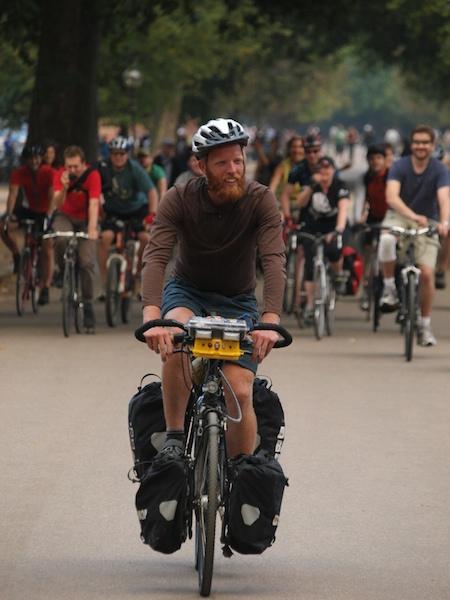 Books and cooks on menu for Globecycle's James Bowthorpe

Record-breaker on TV today, book deal in pipeline
by Simon_MacMichael

It's more than a month since round-the-world cyclist James Bowthorpe rolled into Hyde Park to complete his record-breaking circumnavigation, but he’s keeping himself busy spreading the word about Globecycle, including appearing on a TV cookery show and lining up a potential book deal about his epic 18,000-mile journey.

According to James, “they were mostly interested in what I ate, my favourite meals, the amount of water I had to drink and my calorie intake. They had a few sample meals spread out on the table and also the water that I drank on an average day poured out in pint glasses – 18 pints, I think!”

And they cooked for James, too, although it turns out that the dish on offer was his “worst meal” – we won’t spoil it by telling you what it is, but presumably the programme will include the standard warning that “viewers of a nervous disposition should look away now.”

As for the potential book deal, James, who updated his blog during his trip whenever he had some spare time, admits that this wasn’t something he’d thought of before setting out, but it’s definitely of interest and he is now working on a sample chapter. James is determined however that if any book does result, it’s going to be a lot more interesting than just a chronological account of his trip sprinkled with a few anecdotes.

James admits that he didn’t know quite what reception to expect when he got back to Britain, but says that the round of interviews and appearances at various events haven’t been “too much of an ordeal – part of the idea was to get media attention.”

The motivating force behind James’s record-breaking journey was his desire to raise £1.8 million to fund research into Parkinson’s Disease, so how is that progressing? “It’s going well, I’m organising talks and fundraising events, so that’s all good,” with his programme including a talk next Spring at the Royal Geographical Society in Kensington.

And there may even be a return to the saddle for James as he continues to try to maintain awareness about his fundraising drive. “I didn’t think I was going to want to do anything again,” he explains, “but I’ve already got a couple of ideas. I’m talking to some people who are possibly doing the Race Across America, which is supposed to be the hardest cycle race in the world, so I’m just toying with that idea and a couple of other slightly more fundraising-type things."

While James’s travels may have come to an end temporarily, those of the bike he rode round the world haven’t, with his Santos Tourer, which appeared at London’s Cycle Show earlier this month, currently on its way to the Netherlands where it will be displayed at the Utrecht Bike Show.

You can help James reach his £1.8 million goal by donating through his site at www.globecycle.org, and follow his news via Twitter, where his user name is @globecycle.