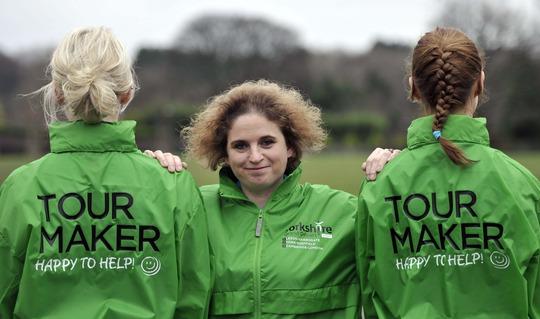 Asda, the supermarket chain based in Leeds, is to partner with Welcome to Yorkshire to launch what they say is the first-ever ‘Tour Maker’ programme as the region prepares to host the Grand Départ of next July’s 101st edition of the race – and its not too late to take part.

The scheme, which seeks to recruit 10,000 volunteers to help ensure next year’s Tour’s opening three days go smoothly and echoes the Games Makers who played such a big role in the success of last year’s Olympic and Paralympic Games in London, has been formally launched by Deputy Prime Minister Nick Clegg this afternoon.

The Liberal Democrat leader, who represents Sheffield Hallam, was joined by one of the top riders Yorkshire has produced, Malcolm Elliott, who hails from the city that will host the finish of Stage 2 of next summer’s race.

Mr Clegg said: “You can already sense the buzz and excitement right across the country as we get ever closer to Yorkshire’s Grand Départ – and the launch of the Tour Makers and the public’s response to it already is evidence of that.

“I would urge anyone interested in this scheme to put their names forward now.

“The eyes of the world will be on Yorkshire when the peloton sets off from Leeds and spends two days racing around the county before finishing in Sheffield, and then racing from Cambridge to London.

“It promises to be an historic, spectacular event and really cements our nation as a global sporting leader.”

Applications to become a Tour Maker for any of the three stages in England can be made here – the deadline is 31 December. Roles might include meeting and greeting visitors at airports, or supporting the emergency services or National Park rangers.

Asda, founded in Leeds more than 60 years ago and which still has its head office in the city, will be helping to recruit volunteers, as well as training them and providing their uniforms, which will be exclusively designed and supplied under the George range.

The supermarket operator’s chief marketing officer, Stephen Smith, said: “We are really proud of our Yorkshire roots and it’s such an honour for Asda to be involved in a first for Tour de France, by supporting the Tour Makers in such an iconic sporting event that’s on our doorstep.

“Every day, each of our 200,000 colleagues go the extra mile, delivering great service and we wanted to share some of this experience by playing a major role in supporting the thousands of volunteers who will help to make the Yorkshire Grand Départ of the Tour de France a huge success – I personally can’t wait,” he added.

Welcome to Yorkshire’s chief executive, Gary Verity, said: “It is great to have secured a partnership with Asda, a firm whose roots are inextricably linked with Yorkshire and who understand what this sporting moment will mean to the county.

“Yorkshire will be at the centre of the global stage next summer as the world’s largest annual sporting event starts in the county.

“Two to three million people are expected to line the routes of the three stages in England and the Tour Makers will play a hugely important role in welcoming the world to our proud county and giving them a memorable experience during their stay.”