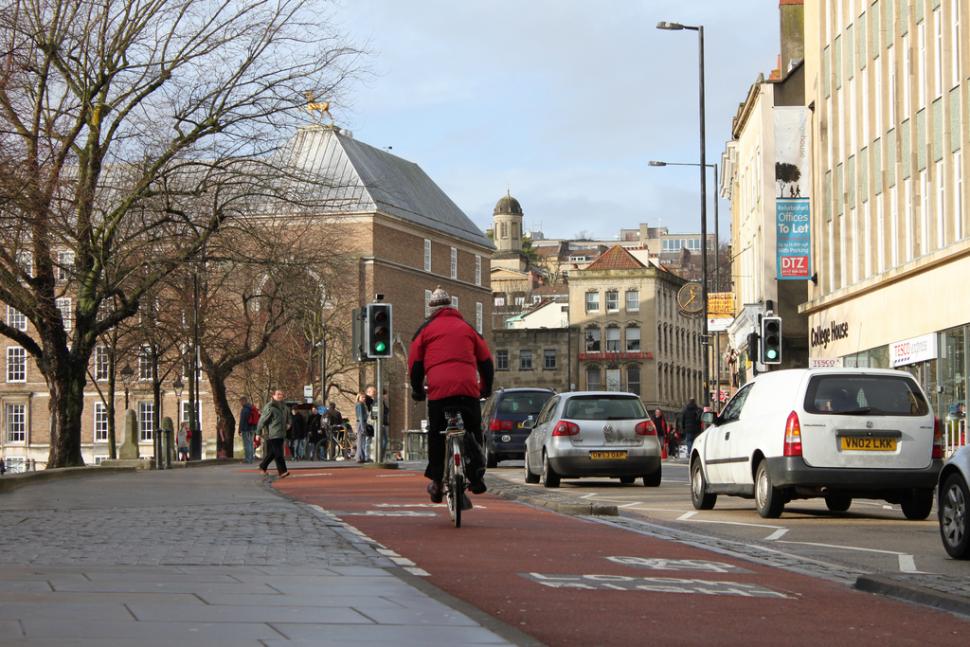 Petition breaches 3,500 signatures and will be presented to council in Spring, while Road Safety Summit discusses speed limit changes and lightless cyclists
by Elliot Johnston

A successful petition run by the Bristol Cycling Campaign (BCC) has triggered a council debate over the potential introduction of a Dutch-style network of bike lanes in the city. Meanwhile, the council’s current plans to improve the safety of the city's roads were discussed at the Bristol Road Safety Summit on December 11.

The proposal for the extensive Bristol Cycling Network was originally brought forward by the BCC in October as part of their five point Bristol Cycling Manifesto, which at the time of writing had 3,759 signatures. The manifesto suggests a number of changes other than the cycling network, including the election of a Cycling Commissioner and a target to quadruple the number of people cycling in the city by 2025.

The council had originally planned to put the cycling network proposal forward for public consultation in the New Year. However, following the success of the petition, which exceeded the council’s policy threshold for debate of 3,500 signatures, the manifesto will be put forward for discussion at a meeting of the full council some time in March.

Mayor of Bristol George Ferguson has already shown support for cyclists through his backing of a rush hour lorry ban, and welcomed the petition through his Twitter account, saying: "Thanks Bristol Cycling Campaign. Look forward to receiving [the petition]."

It was at the Road Safety Summit that the mayor dropped his biggest hint that the BCC’s manifesto has his support.

“We’re investing nearly £13 million in road safety in the next three years,” the Mayor said to those gathered at City Hall. “I hope that in other ways it’s actually more than that. I hope that we’ll get more cycle lanes and cycle routes than the ones that are currently planned.”

Strategist for the Bristol Cycling Campaign, Eric Booth, spoke to the Bristol Post of his delight at the success of the petition.

"We are delighted with the response and we are looking forward to taking it to the council. But first we are hoping to gain the backing of other groups who also see the benefits of cycling for the city. Those groups are businesses, health bodies, schools and education authorities which understand the full benefits."

Booth went on to suggest that the success of the petition has indicated a positive sway in public cycling support over the last 10 years.

"Proportionally, for a city of Bristol's size, this campaign is one of the best supported petitions nationwide,” Booth said. “Support for cycling and the benefits it brings is so widely supported in Bristol now, only an extreme few won't support it."

The BCC’s manifesto still has to be signed off by the city's Lord Mayor, Faruk Choudhury, before it can be brought before the full council and have any impact on any of the policies which were discussed at the Road Safety Summit, according to a Bristol City Council spokesperson.

The next likely available date for a discussion will be March 18, 2014.

However, the Road Safety Summit on December 11 was an opportunity for Bristol City Council to air their current plans for road infrastructure in the city before the manifesto discussion in the Spring.

In his opening speech, Mr Ferguson opening speech highlighted the overwhelming numbers of cars on the roads, and the changes to speed limits that he has planned.

“I make absolutely no excuses at all for having a strategy to reduce the domination of motor-vehicle traffic and to encourage greater use of safer modes of travel, and healthier modes of travel,” the Mayor said.

“As you know we’ll have a city-wide, with the exception of some of the key routes, 20mph limit by 2016. That will massively reduce the level of damage and death to people across the city."

Building on the changes to speed limits in the centre of the city, further efforts to slow drivers are being taken through work with the dormant city speed cameras.

“The cycle ambition fund is investing £8 million into east-west and north-south routes, and I’m pleased to announce that the work to turn the speed cameras back on will commence in the new year,” Ferguson said. He continued to denounce the dissenters who oppose the move.

The mayor went on to talk about the misuse of barriers on the city’s streets, and the impact they have on driver awareness and the illusion of safety for pedestrians and cyclists.

“While we don’t need barriers as much as we have them, i do think that there is a case for greatly increasing the number of dedicated paths for pedestrians and cyclists,” Mr Ferguson said, adding that there is a need to develop “a much greater and better understood set of rules between pedestrians and cyclists and mutual respect. In every case, the faster, more dangerous form of transport should take a particular responsibility.”

Yet, despite his clear support for cycling in the city, the mayor was critical of those who don’t obey the basic rules of the road.

“It doesn’t help to create a feeling that cyclists are to blame for everything. But, it is stupid and irresponsible not to obey the basic laws and rules,” Ferguson said.

“It’s stupid to cycle at night without lights, there are a huge number of people who do it. It’s a matter as much about self preservation as it is a decency to other users on the road.”

The mayor wasn’t alone in citing the risks of riding without lights. Police and Crime Commissioner Sue Mountstevens highlighted the impact that lightless cyclists have on the mentality of motorists around them, and the dangers that can cause.

“I do bang on about cyclists with lights, because I think that when people see cyclists without lights it increases the road rage,” Ms Mountstevens said.

“I’m trying to be impartial here, but if cyclists did have lights I think it would reduce the tenor of this conversation. You’d be saying cyclists were being responsible and motorists wouldn’t feel this immediate road rage everytime they see [a cyclist without lights].”