Bike Smut comes to the UK

The Bike Smut Film Festival has been going for seven years, has been shown in 24 countries and this week it’s visiting the UK for the first time in two years, showing “Back In The Saddle” in Bristol, Brighton and London. It’s a whole new program of cinema with 15 original short films of bicycle erotica from the last two years of programming, including films from 9 countries presenting countless expressions of sexuality. 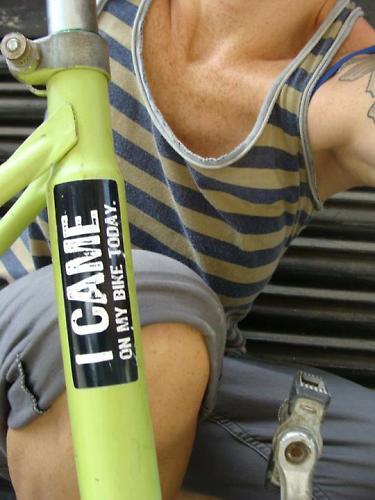 The only way to see Bike Smut is when it plays in a theatre, bike shop or basement to a live audience. After more than 1,000 screenings Bike Smut have had no leaks, it’s a process that keeps filmmakers identity as safe as they desire. There is a video trailer showing a montage of what you might expect to see at a Bike Smut event, we’ll let you search that one out for yourself if your interest is piqued so as not to offend those of a more delicate disposition. Actually if you’ve ever been offended by anything it’s probably best you sit this one out.

At first you may not see the connection between sex and cycling. Some are attracted to the sleek designs, we all know that one. Some champion how bikes liberated women, while others think bikers are hot and want to do, um, things with them, with their, um tools. The films enthusiastically display the quality of creative expression and the amount of fun inherent in both cycling and sex. According to Bike Smut, both actives are worth elements of a healthy lifestyle and a pleasant quality of life. Try telling that to the other half.

If you’re feeling a little bike-curious then pop down to any of these venues to scratch that itch.