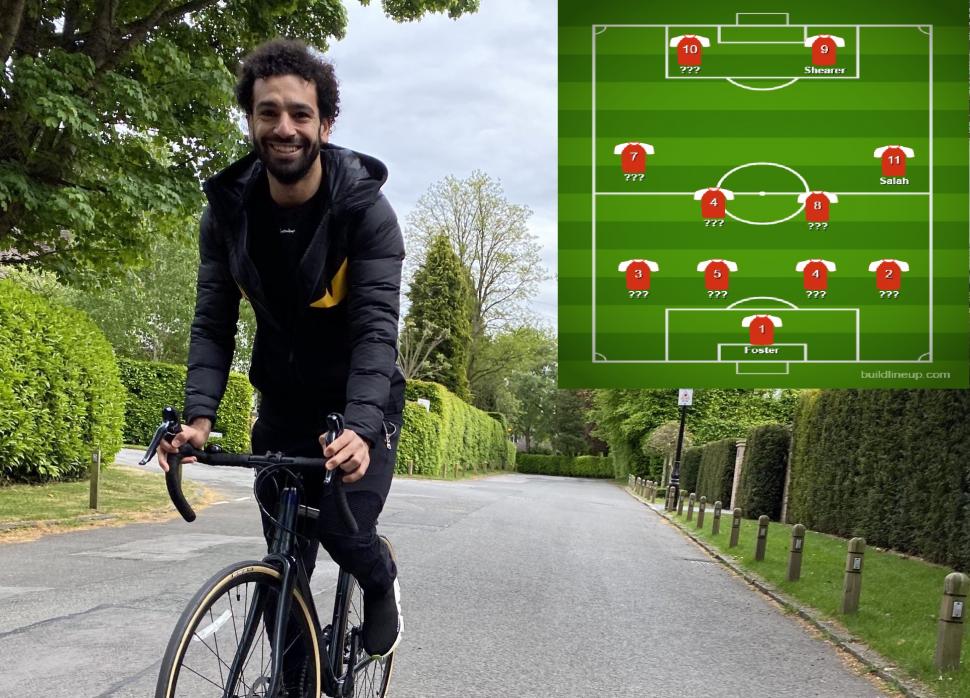 From Shearer to Salah via a Premier League-winning manager, Champions League winners, record goalscorers and of course... Neil Warnock in the dugout
by Dan Alexander

It may be grey, cold and rainy here in the UK but the World Cup is underway which gives us the perfect excuse to get the tactics board out and bring you a line-up of football stars (and some less befitting of the title) past and present who would make our 'footballers who cycle XI'.

From big names of English major tournament squads to Premier League, Champions League and World Cup winners, these are the thirteen names we'd send to go bring the trophy home (by bike)... 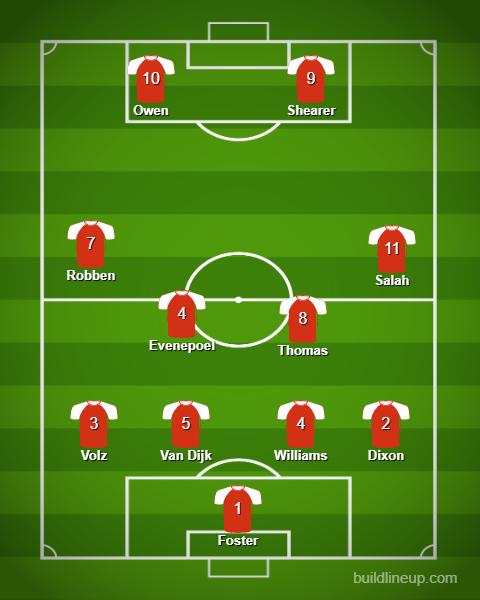 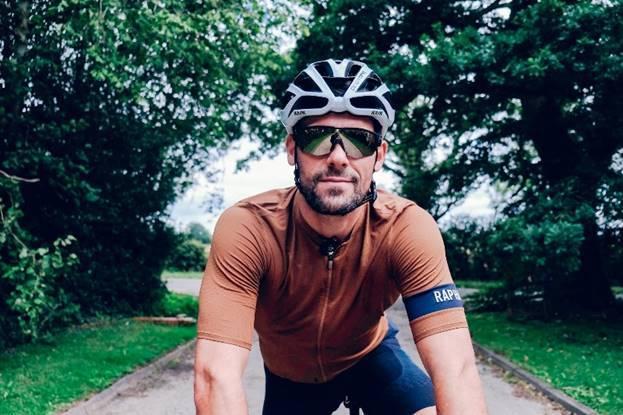 I mean, was it ever going to be anyone other than the 'Cycling GK'?

> "If a pro cyclist could come into a football club and show the players how hard they work it would really open their eyes", says Ben Foster

More importantly, with more than 1.2 million subscribers on his YouTube channel 'The Cycling GK' where he regularly documents his Zwift exploits and life on a pretty tasty Specialized S-Works Diverge, Foster has clearly caught the cycling bug.

Oh, and back in March last year he joined us for Drink at your Desk Live to tell us all about it...

Took this little gem for its first wet ride earlier. WHAT A BIKE!#canyon #wetk’scountdouble pic.twitter.com/uTcpyromPe

Sharing a snap of that beauty was always going to go down well with us...

Virgil van Bike gets the nod to lead the backline. Strong, dominant in the air, with the characteristic Dutch proficiency for playing out from the back. You'd probably give him the captain's armband too. In another life we imagine Virgil shepherding his GC leader to the front of the bunch, taking no nonsense, and never missing the front echelon.

Suggestions for a second centre back would be gratefully received. There's no two ways about it, we were struggling here...

Unless you're a regular down Ashton Gate you're probably now shouting 'who?' at us — no offence, Joe — but the Bristol City scouser's enthusiasm for saddle height adjustments, only to nearly crash into a teammate and blame his "deathtrap" machine was weirdly relatable.

Is he a centre back? No. Are we asking him to play there? Absolutely.

Here's the giveaway this was written by a Fulham fan...

Like Gareth Southgate we're shoehorning as many right backs into this defence as possible, but Volz — scorer of the Premier League's 15,000th goal, prompting '15,000 Volz' headlines across the backpages — is probably one of the more deserving entrants to our squad.

During his time in south-west London the German regularly rocked up to training and matches at Craven Cottage on his folding bike, Jimmy Bullard calling his teammate a "proper weirdo" during an interview with the Guardian.

"He used to cycle to training and occasionally to matches which says it all really," Bullard said. Nothing weird about that, Jimmy...

The Egyptian King earns a spot in our XI thanks to this lockdown tweet which, painfully predictably, sent the cycling world into meltdown over the hood angle... just enjoy the fact one of the world's most famous athletes is riding a bike. 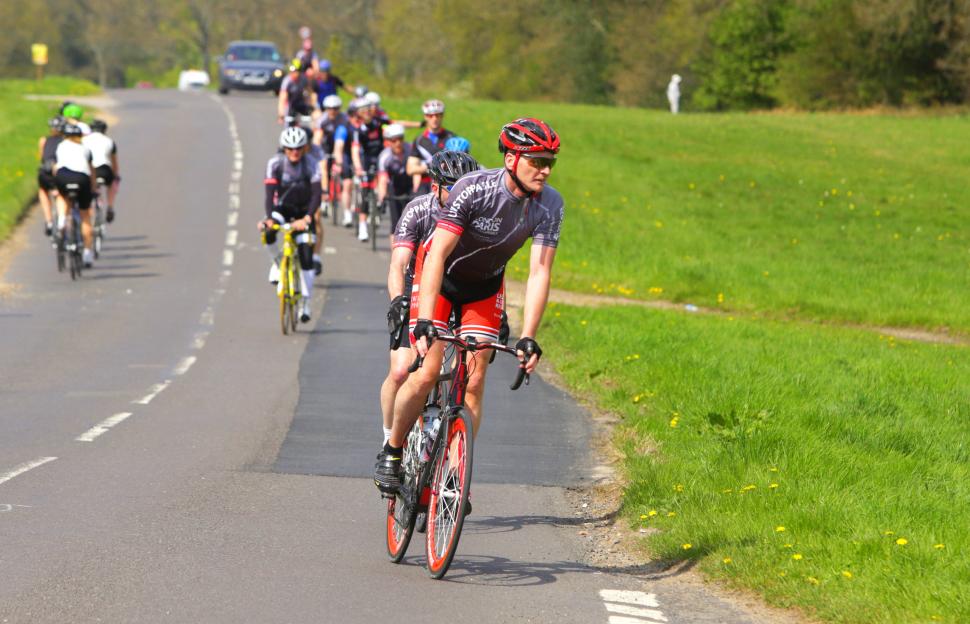 Former Crystal Palce, Wolves and England midfielder Geoff Thomas's cycling exploits are legendary. Having recovered from leukaemia, Thomas won BBC Sports Personality of the Year's Helen Rollason Award in 2005 having raised £150,000 for Leukaemia Research by riding the entire Tour de France route a few days ahead of the race.

If that wasn't enough he's done it multiple times since, and in 2017 rode all three Grand Tours, racking up more than 10,000km. In 2021 he was awarded an MBE for his charity work and this year's Tour 21 event raised over £800,000 by the time the fundraising riders reached Paris. Sorry, Virgil, I've changed my mind. Geoff's captain.

Didn't think you'd make it through without a Remco mention, did you?

As you're probably all too aware by now the newly crowned World Champion started his sporting journey on the football pitch, playing for local club RSC Anderlecht before moving across the border to PSV Eindhoven.

Remco Evenepoel (2000) has won the Vuelta a España, the first Grand Tour GC victory of his career. He played at underage level for RSC Anderlecht, PSV Eindhoven as well as Belgium before switching fully to road cycling in 2017. pic.twitter.com/HaCJHmdRzv

A defensive midfielder who could also play left back, Remco was apparently a pretty tidy passer with a good left foot and strong set piece delivery, his stamina moving him into the middle of the park from his early days as a goalkeeper.

Anyway, Remco fell out of love with kicking a ball and took up cycling in his teens. One Monument, a rainbow jersey and Vuelta a España later, I think we're all pretty happy he did...

He proceeded to bike back home 🚴‍♂️. What a legend (via @RonvanderWeerd) pic.twitter.com/Y2riRXmzAP

Yeah we know he played on the right and loved cutting in but we can't have two right wingers...'Arjen lad, just beat your man and stick it in the box'...

Speaking to the Daily Mail in 2004 while at Chelsea, Robben responded to a quizzical question about him cycling to training... "Why not? The new complex is very close to where I live with my girlfriend, and if the weather is nice I can go by bike again...

"When I started playing first-team football, I didn't actually have a driving licence. I had to go by bike. I used to cycle 10 kilometres each way to school every day, and I used to cycle to training as well."

Robben scored 37 goals in 96 caps for...yep, you guessed it, the Netherlands, playing the full match as his nation lost to Spain in the 2010 World Cup final.

Getting on the end of Robben's crosses will be Big Al, the Premier League's all-time record goalscorer and proud member of the N+1 club...

Up top alongside Shearer is another famous England name from the 90s/00s heartbreak era — Michael Owen. The man who made live blog headlines after taking a dive when he forgot to unclip as he returned home from a ride.

First ride of the year and I forgot the golden rule - if in doubt, clip out!😂🙈 pic.twitter.com/CHZm01XZ5N

Every top team needs a great manager, but how about this for a double-act? Scarf-wearing Italian charmer Roberto Mancini alongside the Football League's finest fisherman Neil Warnock.

Mancini, the Premier League-winning manager who arrived at Manchester City's training ground aboard his £2,500 road bike and cites Francesco Moser and Marco Pantani as his heroes.

Warnock, the journeyman promotion specialist who takes his riding at a more leisurely pace...

We feel like these two should be snapped up for 'Neil and Roberto's Italian adventure' by one of the more obscure ITV channels and spend the summer jaunting around the Italian countryside by bike, wine tasting and reminiscing about the good ol' days.

That's our XI, but who have we missed out? Get your suggestions, preferably a centre back, in the comments. Just don't mention Kevin Keegan...