Giro d'Italia - A sense of place

The French call it terroir. It doesn’t really have an equivalent in English, but describes the effect of soil, climate, aspect and general growing conditions have on grapes and the wines they produce. It’s not too hard to distinguish in some cases, most of us who like a glass can, if pushed, taste the difference between an Australian Shiraz and a French Syrah (the same grape) even if that bottle of Côte du Rhone doesn’t have the grape name written on it anywhere. Experts profess to taste differences from vineyard to vineyard, vintage to vintage, especially in the classic growing regions of the world.

At 254 kms Stage 13 was the longest of the 2013 Giro d’Italia. On the face of it, it could have been seen as a transitional day, the road book described it as flat, which may have caused the uninformed follower to believe the riders would have a restful day, even if six hours is never easy, especially in a race where someone always has something to fight for. But it’s not just the distance, or the fact the previous two days had been hard ones, there’s a difference between a flat stage in the Tour de France and a “flat” stage in the Giro. Heading east to west, the percorso loosely followed the western Po Valley, passing through Tortona, paying homage to Fausto Coppi who lived and died in the town. Finally, with 220 kilometers in the riders’ legs, the race entered the Piemontese vineyards and hit Tre Cuni, a category 3 climb of over 300 metres, which was followed by two further shorter climbs. The effects of terroir make different vineyard areas better for certain grapes than others. You don’t see Cabernet Sauvignon in Burgundy, you don’t see Pinot Noir in Bordeaux and you don’t see Nebbiolo anywhere in the World other than the beautiful vineyards of North- Western Italy. It makes powerful but delicate and fragrant wines, too expensive for glugging in front of the television, they should be savoured with a meal. We’ve all heard of Chianti, but the wines of Barolo, Barbaresco and the Langhe are just as Italian. The vines grow in ordered lines along the sides of the steep hills which allow drainage and exposure to the sun. The same hills which made the end of the day’s racing so challenging for the sprinters’ teams.

Had this been a Belgian Classic, fans would have been wrapped up against the cold and rain, the drink of choice would have been beer and the air thick with the smell of frying. There’d be cobbles and crosswinds. Barriers would be alive with waving flags, whether Flandrian or Walloon and there may be a slight air of tension. The Tour de France is a huge, mad circus, with a corporate feel which ensures that one side of the last 200 metres of the parcours is lined with grandstands constructed for those either special or rich enough to deserve a perfect view. A big screen is often placed so they can watch the race unfold (if they can be bothered, most are elsewhere being entertained,) while the fans take their limited places hours before even the caravan arrives. On the outskirts of Cherasco token pink balloons and ribbons flutter outside empty buildings. Near a factory the workers, wearing pink and finished for the day, are sat around tables which heave with food and wine. In town, every other building has some sort of pink decoration and it’s busy, though not overwhelmingly so. There’s a festival feel, smiling strangers approach for a chat in a babble of Italian, groups stand and pass the time of day, including the Carbinieri their surly appearance misleading. You wouldn’t get that in France. You might get cafés and crowds supping white wine, but they’re here too, the sun shining down on a pink party scene. The whole feel is more relaxed, more intimate, and, with fewer foreign voices to be heard, less international.

Sporting the ubiquitous facial hair a tall dark man is pacing around under the pink finish gantry, he’s competing with music on the PA, trying to rouse support from the crowd for a

group of pink children on bikes. The ridiculously loud music changes every time you begin to hum the tune, and dancing girls contort themselves in a very Latin way. The French would never be so risqué and the Belgians would need to wear too many clothes for such titillation. 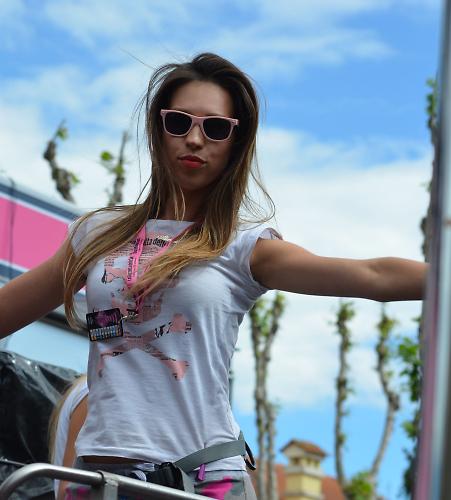 The lead up to the stage had been about whether Mark Cavendish’s team mates could get him over the hills of Barolo and use the flat last 6 kilometers to position him for a sprint. He’d won the previous day when hideous weather had put paid to Wiggins’s challenge and Hesjdal’s defence and the thought was that the conditions had taken their toll on the Manxman. No one told him and, amidst the babble of the Italian commentary, his name was heard regularly at the finish. The cheer as he was presented on the podium was beaten only by that for Nibali’s pink jersey. 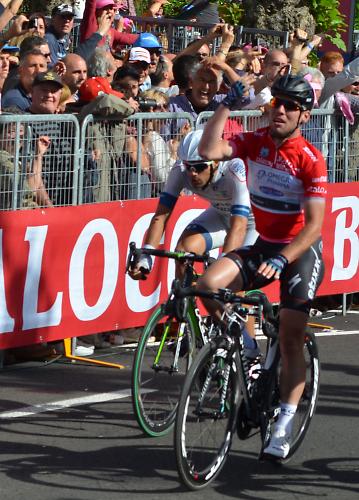 If you can, prove your love of this sport by visiting a Belgian Classic, revel in the atmosphere of a Tour de France stage, leave your family on the beach and go to a shadowless, boiling stage of la Vuelta. Revel in their differences. But remember, it’s not just the fans on the roadside that add the variety, road racing is truly of the land. A football match takes place on a piece of grass surrounded by seats. Every pitch conforming to internationally set standards. Once even at the top level how the game was played did owe something to the country or region in which it was played. These day although the atmosphere may differ from place to place, the game is essentially the same. In cycling the terrain has always been a much more integral part of the contest and continues to be so dictating how the race develops, it dictates an array of tactics and, to an extent, who wins: you won’t see Cavendish winning many mountain top finishes. Change the weather and another dynamic comes into play; would Wiggins have crashed in the dry? Even Nibali hit the deck on a wet descent in the 2010 Giro di Lombardia. Like wine, cycle races are influenced by their surroundings. The combination of the cultural, topographical and climactic conditions make every race different, change the approach of the participants, alter how we celebrate the event and make this sport truly beautiful.