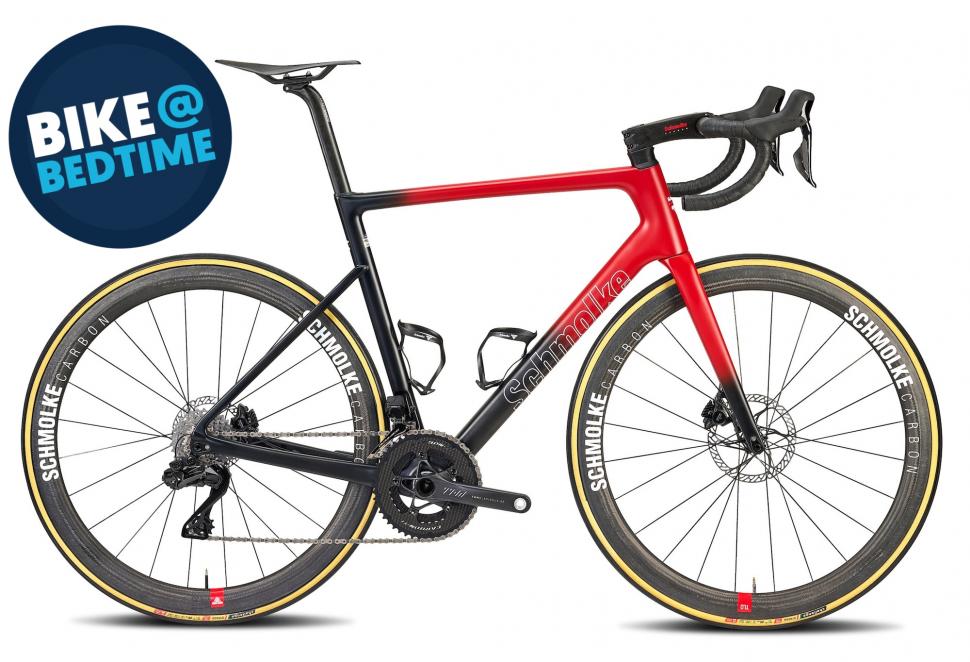 This new Schmolke Aerrow Shimano Dura-Ace Di2 Disc is the first road bike from the German lightweight carbon company, and it hits the scales at a claimed 6.3kg – well below the UCI’s 6.8kg minimum weight limit for racing – with even lighter builds possible. 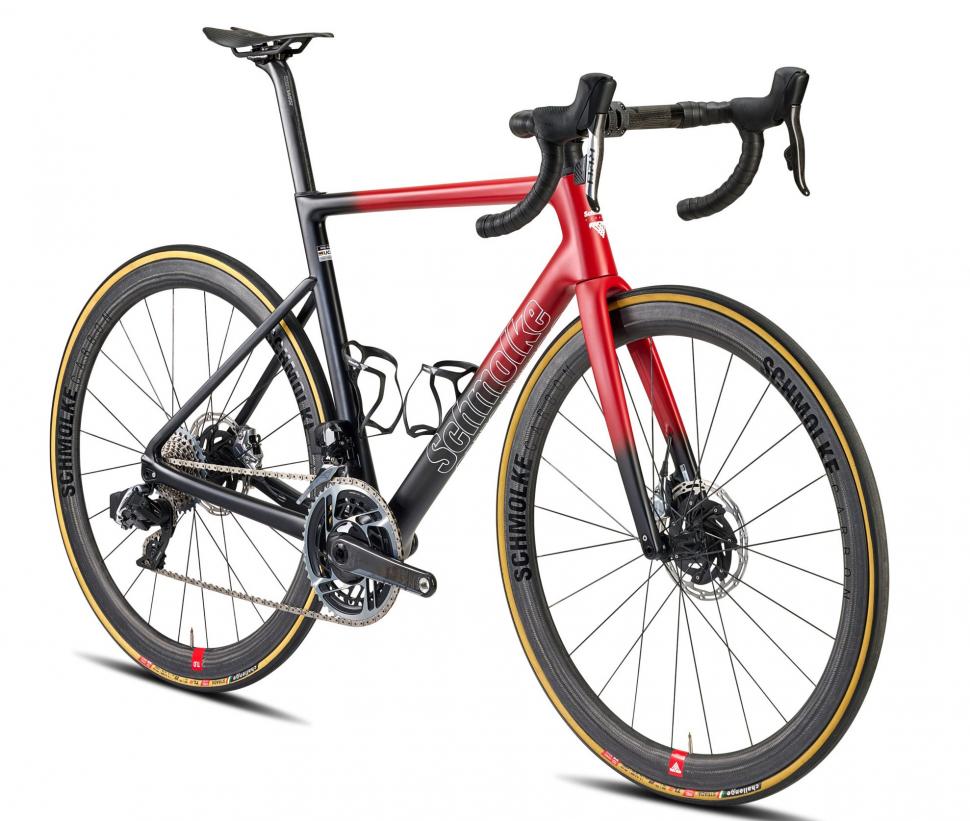 If you don’t know much about Schmolke, it’s a boutique carbon brand that has been around since 1992, supplying the likes of Jan Ullrich and Erik Zabel over the years. It makes handlebars, stems, seatposts, saddles and wheels – all of it from carbon and always with a focus on keeping weight low. It’s specialist stuff and is priced accordingly. Schmolke’s carbon stem will set you back between €498.99 and €645.00, for example (about £435-£550).

If you’re obsessed with lightweight components, though, and you don’t mind digging deep, Schmolke is perfect for you. That carbon stem weighs just 81g in a 100mm length. 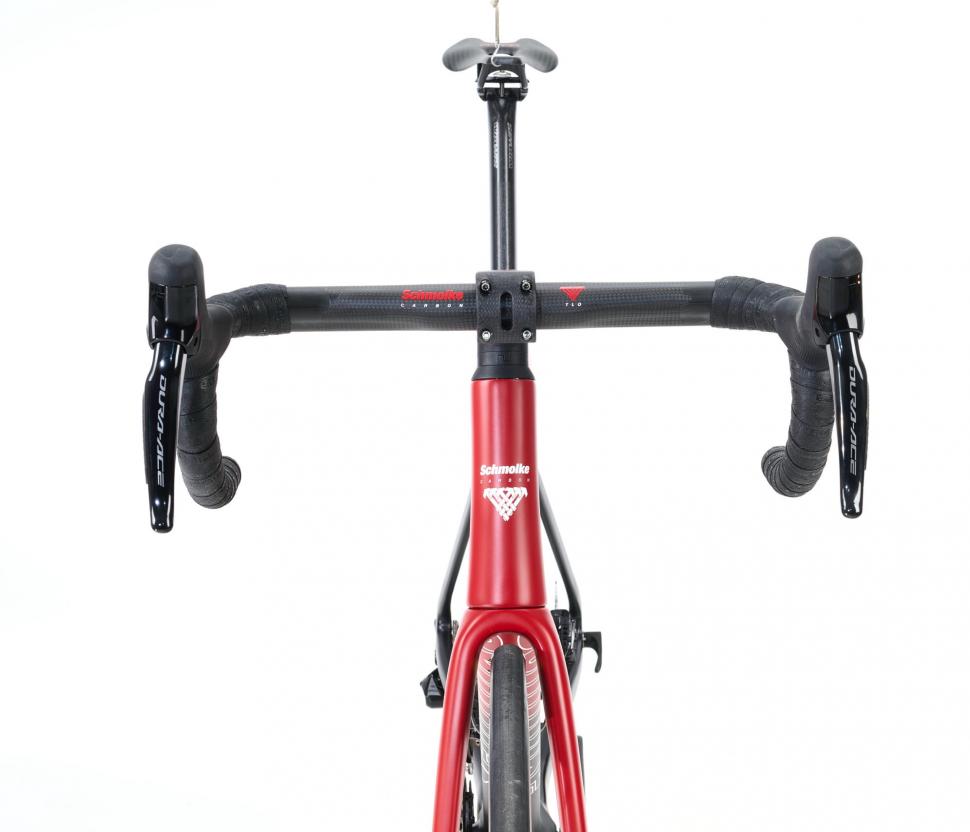 We were impressed by the Schmolke Roadbar Oversize Evo TLO handlebar when we reviewed it. We had the 44cm version (measured outer to outer) and it weighed an astonishingly light 147g while offering a decent level of stiffness.

Now Schmolke is launching its Aerrow road bike that features aero frame tubing, an aero seatpost and dropped seatstays. Routing for the disc brakes is fully internal – as is the case on the vast majority of top-level road bikes these days. At a glance, it looks a lot like Specialized's Tarmac SL7. 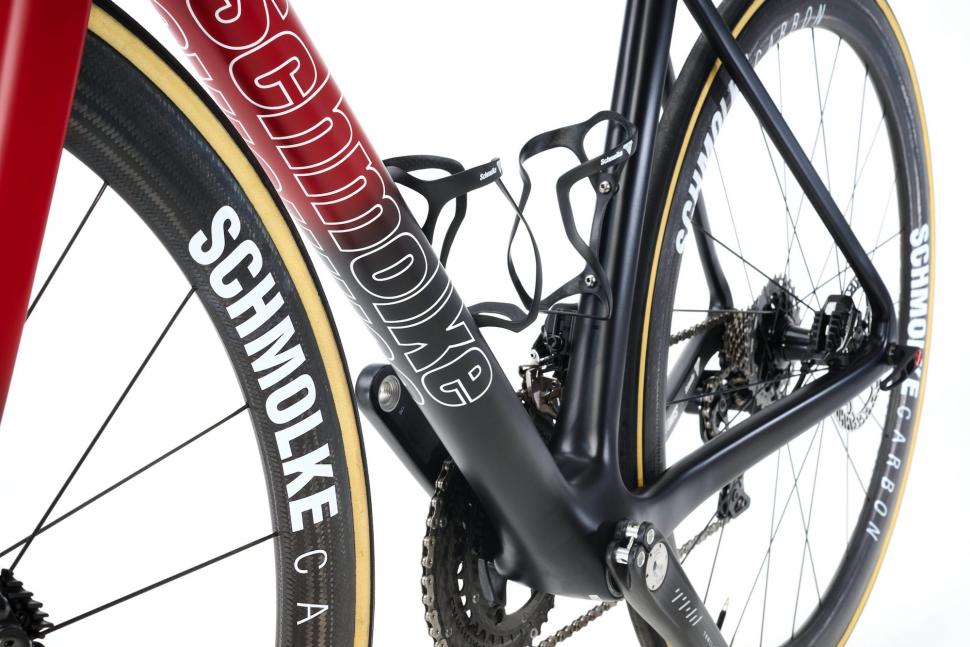 The geometry is pretty aggressive. The medium-sized model comes with 73°/74° frame angles, a 540mm effective top tube (the length the top tube would be if it was horizontal rather than sloped), a 515mm seat tube (centre of BB to top of seat tube), and a 143mm head tube. The stack on this size is 544mm and the reach is 384mm, giving a stack/reach of 1.41.

Although the bike features a UCI decal, it has yet to appear on the list of Approved Models of Frames and Forks. Once approved, brands can request that a bike isn’t listed until the official launch.

The Schmolke Aerrow is available in several different builds, the least expensive being with a SRAM Force AXS groupset. You’re still looking at paying at least €7,459 (around £6,389). 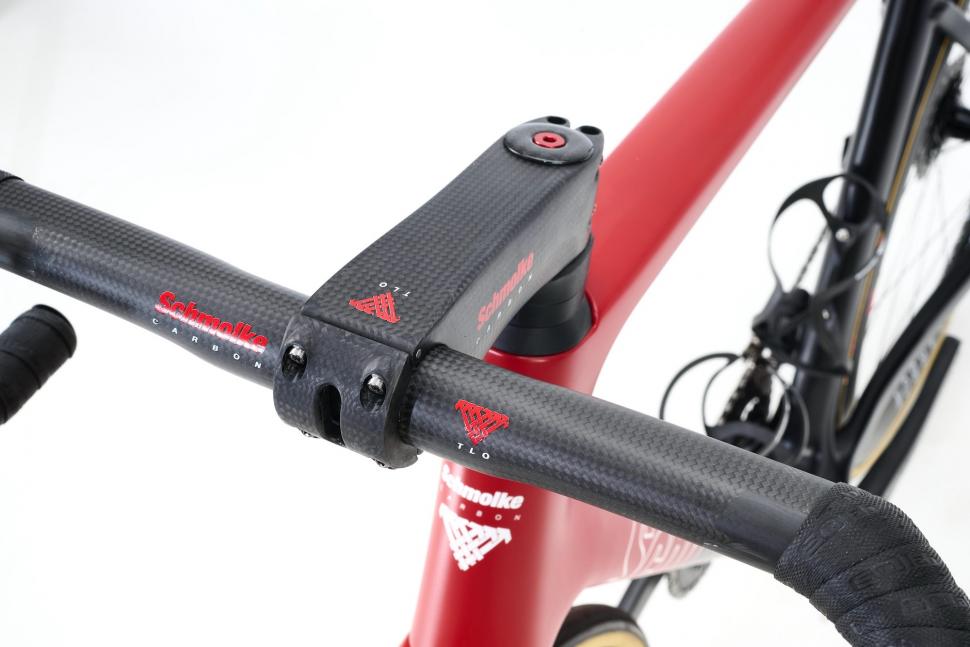 Many of the other components fitted are Schmolke’s own. The Schmolke Carbon TLO Evo ICR handlebar and Schmolke Carbon TLO ICR stem both have internal cable routing (that’s what the ‘ICR’ stands for) while the SP-Aerrow seatpost is specific to the frame. You can choose the handlebar width and the stem length.

You can also specify the Schmolke Carbon TLO wheelset you’d like, from 30mm up to 62mm rim depth (TLO stands for ‘The Lightest One’, by the way). The exact price will also depend on the hubs you choose: DT Swiss 180 or Extralite SPD-3. The tyres are Challenge Strada Pros in either 25mm or 27mm width. The maximum tyre width the Schmolke Aerrow will take is 28mm. 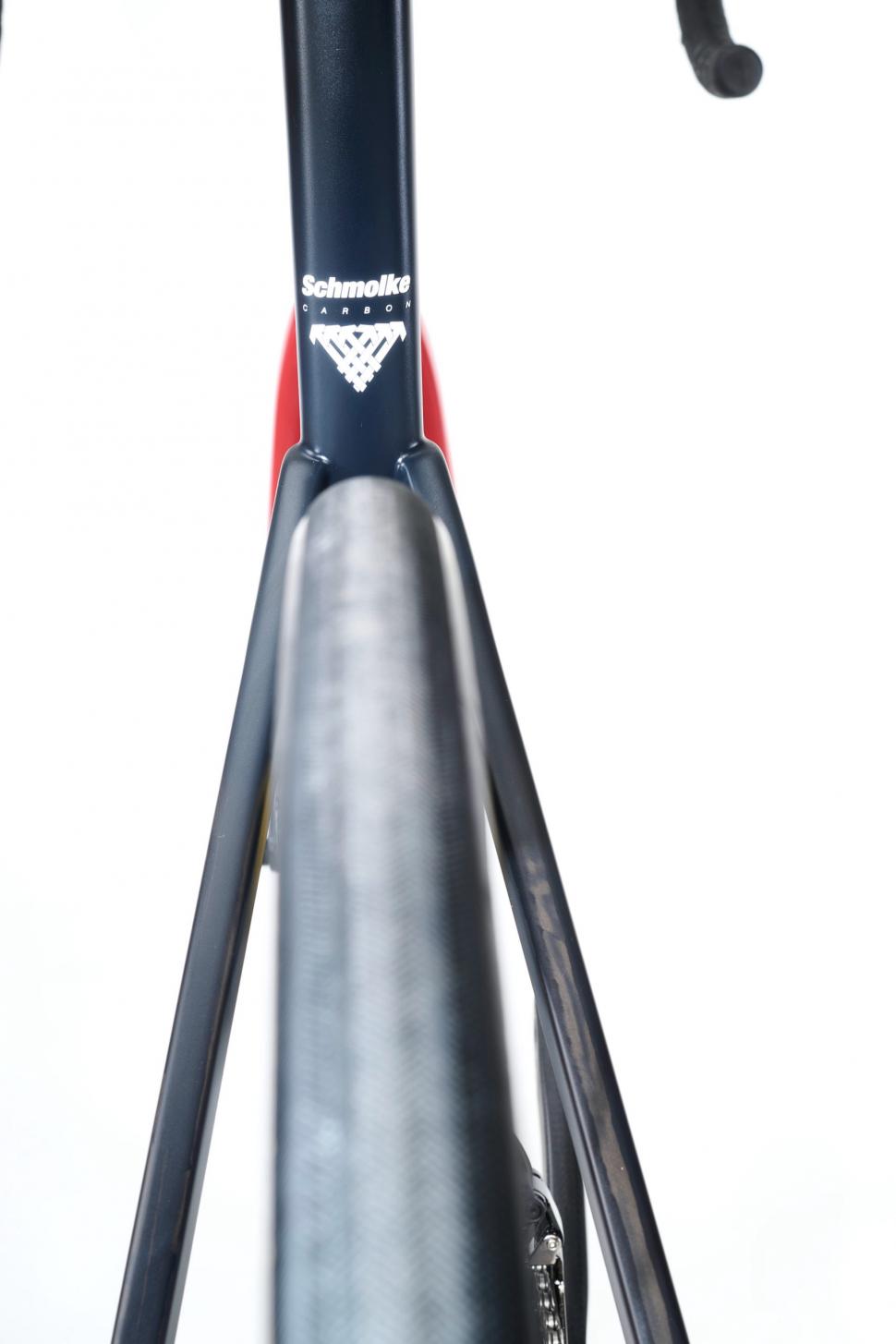 29 of the best high-performance lightweight saddles

The chainset on the model shown is a THM Clavicula SE. This is carbon down to the axle and THM claims a weight of 302g, including the spider. 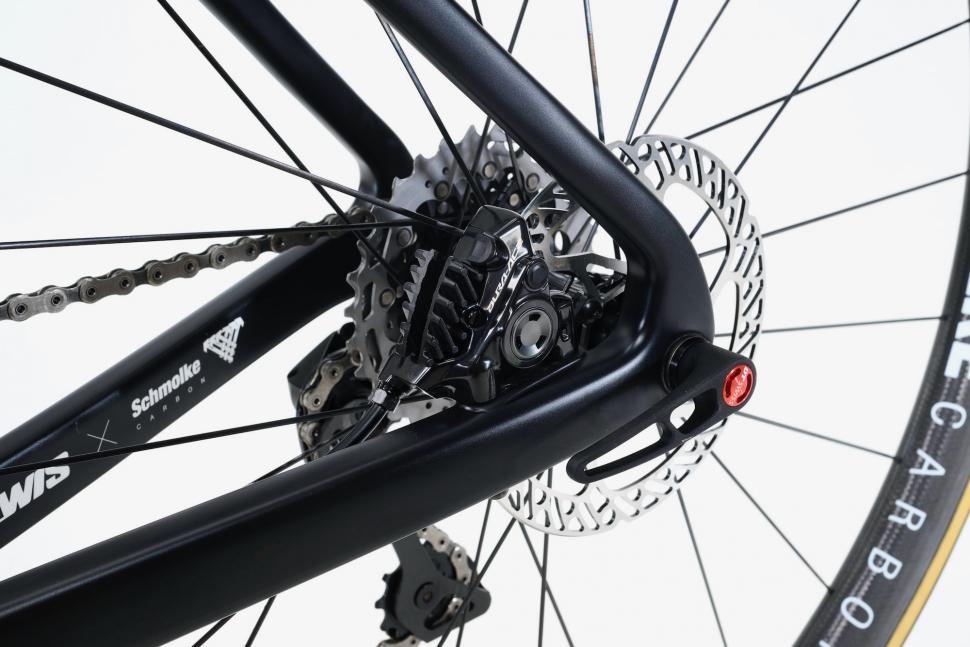 As mentioned up top, Schmolke claims a total bike weight of just 6.3kg for this Aerrow Shimano Dura-Ace Di2 build, which is astonishingly light for a disc brake bike, although it has yet to publish frame and fork weights. Builds as low as 6.1kg are said to be possible.