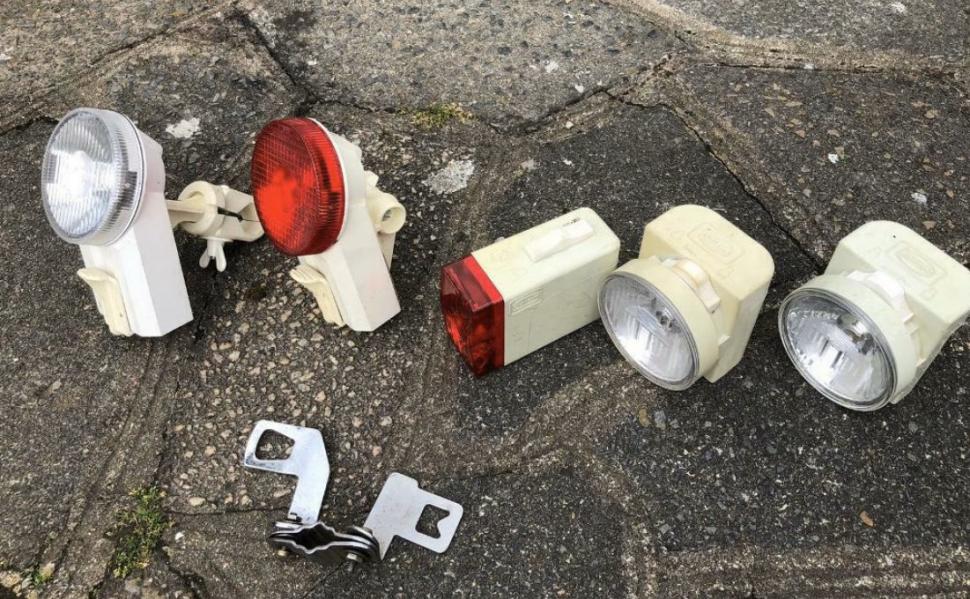 Bicycle lights have come a long way since the Ever Ready

Light tech has come a long way since the Ever Ready of the 70s and 80s. Thankfully
by David Arthur @davearthur

A throwaway retweet of some old Ever Ready bicycle lights caused an outpouring of nostalgia recently, and it reminded us just far much bicycle lights have come in the past couple of decades.

Who remembers these lights? https://t.co/6E60Ez6X7I

Bicycles have improved dramatically since the safety bicycle was first invented but there’s always some resistance to the introduction of new technologies. Just look at the anger electronic gears, disc brakes, single-ring drivetrains, GPS computers et all have caused over the years.

we all had these. They were about 0.2 lumens pic.twitter.com/TnOP8nI7N1

One technology that nobody is disputing we’re better off with is the LED light.  As the excellent Sheldon Brown website reminds us, the bicycle was invented in a time when flames were the only source of artificial lighting. Can you imagine riding in the dark with a candle to illuminate your path!

Yes but I had these. Had the output of a small candle and the battery life of a mayfly. pic.twitter.com/Kbr8UXR4Ui

Fast forward many years and product developments, the invention of light bulbs, batteries and plastics, and we get to the British Ever Ready lights that were popular during the 1970s and 1980s - the lights in the photo at the top of the article.

The Ever Ready is probably the most iconic light from the period, just the mention of the name is enough to send many cyclists down memory lane. The lights used standard batteries and filament bulbs and massive D cell batteries. Brightness was low, battery run time was short and, well they were a bit rubbish to be honest. It’s clear from the many photos shared with us in this Twitter trip down memory lane that for many cyclists these were the earlier experience of bicycle lights. 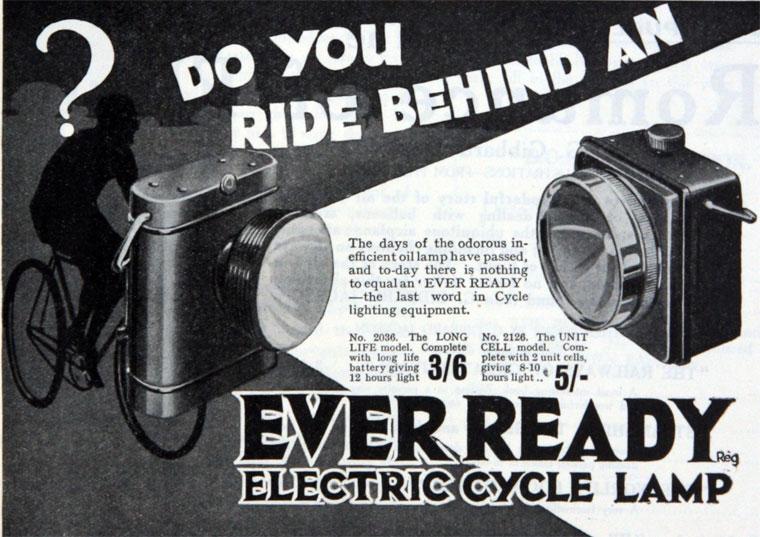 The Eveready name first appeared way back in 1898 with the founding of the US Eveready Battery Company. The Ever Ready name appeared in 1906 and in 1914 the British arm split from the US parent company to go it alone. The tungsten filament bulb was introduced in 1910 and the company concentrated on developing torches through the first half of the 20th Century. Given cycling was going through a boom at the same time, the British company began marketing its lights at cyclists with a succession of models launched over the years. The first thermoplastic moulded cases that many of you remember were launched in 1966 and made waterproof in 1970.

Let’s be clear though, they were good for the day. But I don’t think anybody is disputing the fact that really they were a bit rubbish. Today’s lights are amazing, with incredible advancements in brightness, battery runtime, rechargeable batteries, beam pattern, usability and price. John Stevenson remembers them but it's not all roses, as he recounts:

I used the last generation of Ever Ready lights a lot when I was a shop rat in the 1980s, and they were fairly dire, just like the previous versions. The light they put out was yellowish and feeble unless you fitted halogen bulbs, in which case the battery life was way too short so you had to use expensive alkaline D cells to power them. If you rode at night a lot, nickel-cadmium rechargeable batteries paid for themselves in a matter of weeks.

Even then, the vibration of simply riding bike would move the contacts around enough that they'd corrode, so you occasionally had to take sandpaper to everything to resurrect them.

Even with halogen bulbs, Ever Ready lights never really did more than signal your existence to drivers. If you wanted to see where you were going, you were largely out of luck.

These lights mounted on the bike with clamp-on plastic brackets, a design that came about because Ever Ready was under pressure from French company Wonder. Wonder's lights were lighter and better-looking than the previous Ever Ready lights, even though they used proprietary, non-standard batteries. They were popular because you could easily clamp them on the seat post or handlebar of just about any bike and didn't have to risk damaging the paint with the permanent metal clamps  of Ever Ready's lights of the 1970s.

There were two versions of Ever Ready's last bike lights and their rather wacky brackets. Version 1 had a habit of leaping out of the bracket if you hit a pothole. The light was heavy, especially with those alkaline D cells on board, and the bracket was flexible. If you hit a big enough bump (and it didn't have to be very big) the bracket would flex, the catch holding the lamp would disengage and the lamp would leap on to the road, often smashing the lens in the process.

Our mechanic Malcolm hit on the solution: a prong in the bracket and a matching hole in the lamp to stop the movement. At the next bike show he started to tell the Ever Ready folks about it and they went "you mean like this?" and produced a Version 2 prototype from under the counter.

But Version 2 still wasn't very bright. They were also ridiculously easy to steal and sufficiently bulky that carrying them off the bike was a pain.

Rumour had it that the British Standard for bike lights was written with a great deal of input from Ever Ready, which helped keep them as the market leader even though the lights were more than a bit rubbish.

As soon as they became widely available, everyone who needed remotely serious amounts of light switched from Ever Ready to systems based on separate lamps and battery packs from companies like BLT, Night Sun, Nite Rider and others. The first LED rear lights from Vistalite destroyed Ever Ready's rear light market overnight. When white LEDs became available there was no longer any reason to have an incandescent front light so you could be seen. 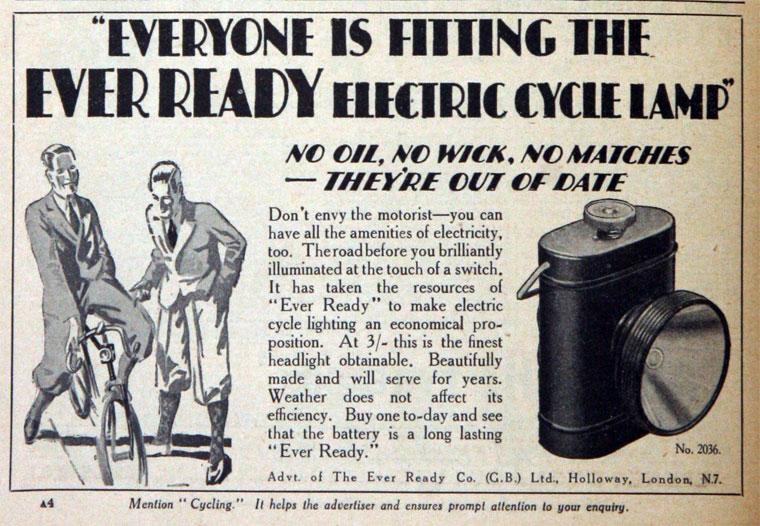 If you riding after dark in the 1980s then most likely you had some Eveready lights. They were simple enough bits of kit: grey plastic case, filament bulb, switch, and space for two D-cell batteries that weighed about as much as your front wheel. The boxy back light attached directly to the seatstay and you know what? It was ok. the bracket worked pretty well, it was bright enough for getting yourself noticed and it didn't look that stupid.

Yes but I had these. Had the output of a small candle and the battery life of a mayfly. pic.twitter.com/Kbr8UXR4Ui

The front was like a modern reimagining of a railway oil lamp from the turn of the twentieth century, and about as much use. It attached to a pressed steel plate on a mounting point on the frame, and kicked out enough light to be see about two yards in front of you, making speeds up up to about 8mph possible before the batteries ran out after about two hours.

Later on the rear got an edgy curved redesign, and later still both lights were redesigned again, with both using quick release brackets that were functionally pretty awful. The front got brighter but the new bar mount moved it further from the road, so the status quo was maintained in terms of actual usable illumination. 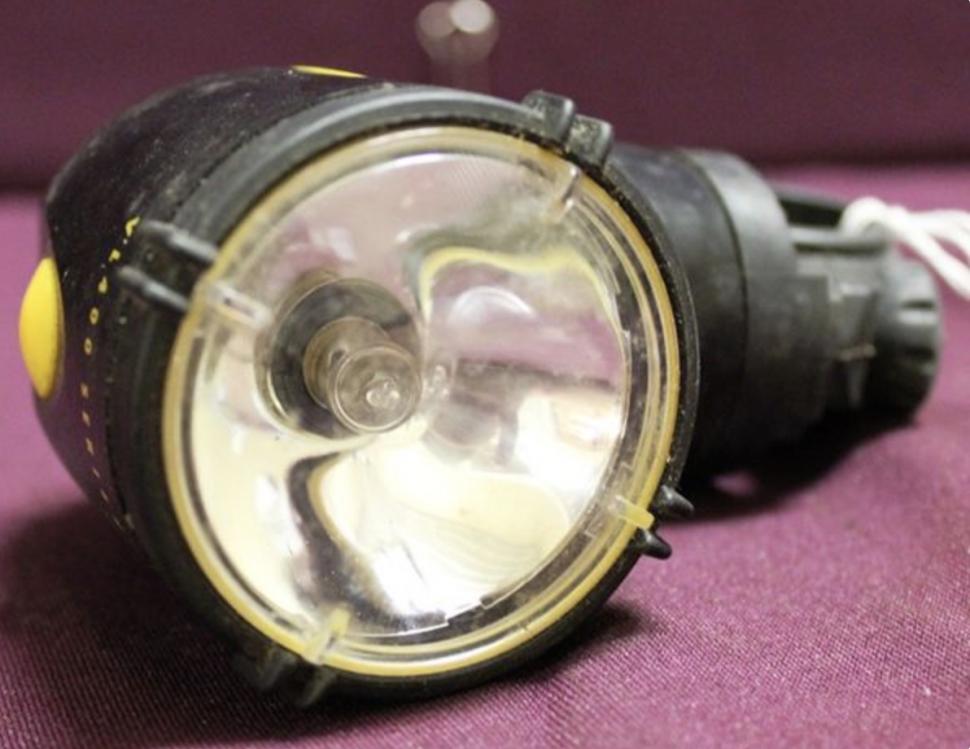 Thankfully, bicycle lights have come a long way since the Ever Ready lights and today LED lights are the norm. We didn't leap straight from Ever Ready to LEDs though, and there have been several notable technologies that have introduced high-powered lights with rechargeable batteries that shone brightly but not for long before LEDs really advanced and took the top spot.

Halogen lights offered a big leap in brightness. I remember the leap in performance a set of Vistalite lights (above) with a 2 watt halogen bulb provided, enabling riding on dark country roads and even off-road mountain biking. The batteries didn’t last long though. 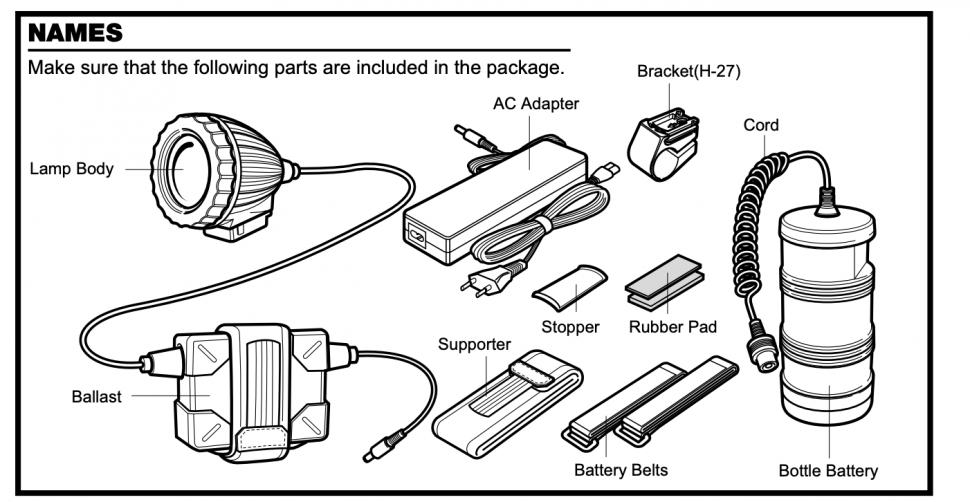 For a brief period, before LED lights became all-conquering, HID lights using metal halide technology were briefly popular. Who remembers the Cateye Stadium? They were much brighter than halogen lights but expensive and the run times were comically short and needed huge batteries and weighed a lot. They are more commonly used in xenon car headlights these days. 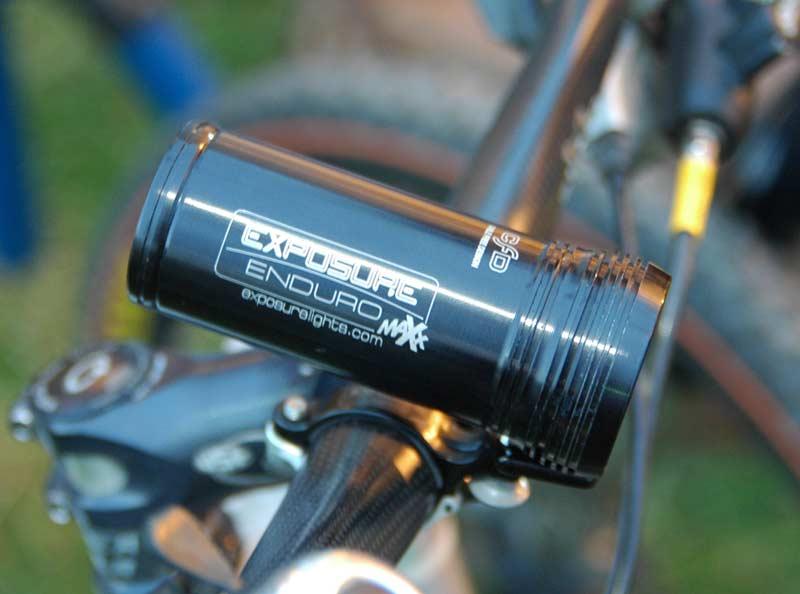 British brand Exposure Lights was launched by USE in about 2005 and was an early adopter of LED technology. The benefits of LEDs was greater light output per watt than halogens, very small size, good runtime from a rechargeable lithium-ion battery, and Exposure managed to pack all the gubbins into a small cylinder that could attach directly to the handlebars.

Battery technology was also a bit contributor to the improvement of cycle lights, and also the small unit design that has become possible. Early lights used regular batteries, but we’ve seen lead acid, NiCad (these suffered from memory so you always had to discharge them fully), NiMH and then to the most common battery used today, lithium-ion like you get in any smartphone or laptop. They have no memory and can be used and charged as needed. 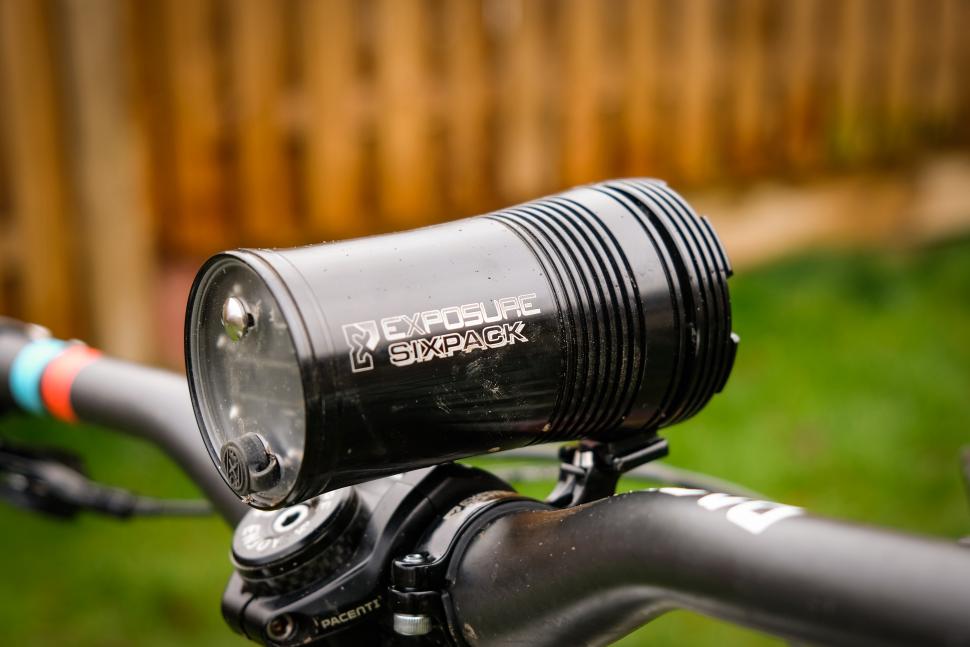 LED lights have continued to get brighter. Exposure’s lights increase in brightness with every model year. Its most powerful model, the 10th generation Six Pack, pumps out a whopping 5000 lumens! They’ve come a long way since the original Race model launched with a paltry by today’s standards 480 lumens.

Over the years the cost of the key components has plummeted and it has led to an explosion of choice, with hundreds of companies offering LED lights at a wide range of prices and brightness levels to suit all riding requirements from commuting to 24-hour mountain bike racing.

I think it's fair to say the development of modern bicycle lights is the sort of progress that few, if any cyclists at all, are thinking are totally unnecessary. Riding in the dark is now more enjoyable and safer and lights are more affordable and reliable.

Here are some more fantastic reactions to those old lights.

My goodness thank you technology

The front light never shine more than a little cross just in front of my wheel.

Brings back memories of 7-days-a-week paper round on those big Ever Ready lights around 1980. The newsagent would pay me £2 on Saturday morning and I’d have to give him £1.60 back for D2 batteries, so in winter I was working for 6p per day! Marvel at LEDs in comparison

Have probably got some in the garage that we haven't thrown away yet. Are they collectors items yet?

They were ruinous. I got stopped by the policeman for not using them as my paper round was scarcely lucrative enough to keep them in batteries. We've made progress.