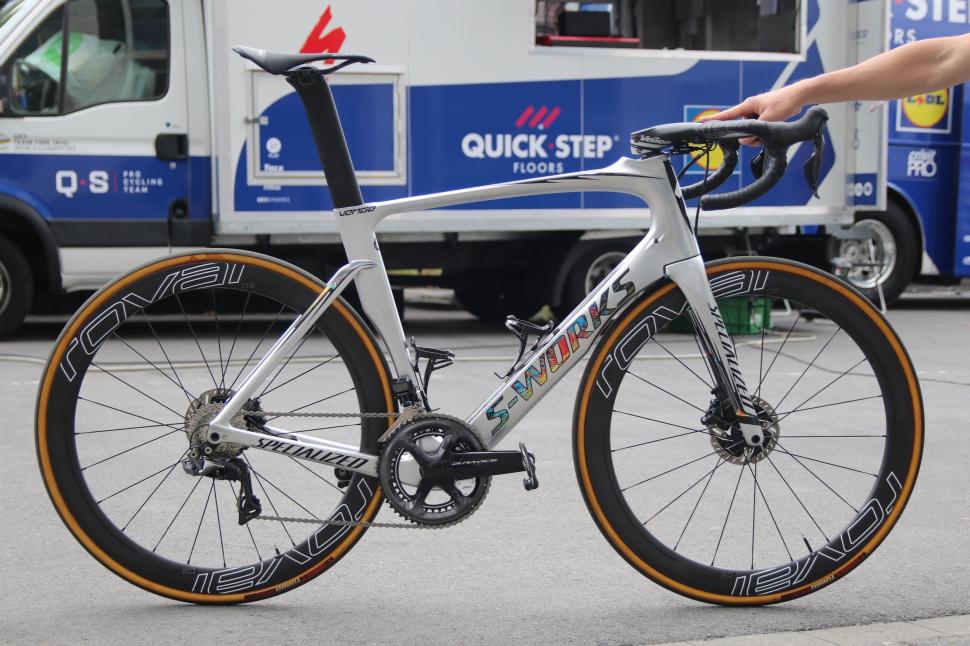 The winning bikes of the 2017 Tour de France - which bike brand has won the most stages?

Chris Froome wrapped up his fourth Tour de France victory in one of the closest races we've seen in a long time. Froome's victory was unusual in that he won the race without winning a stage, but which bikes have won the 21 stages of the race? Here's the complete list of stage winning bikes.

Of course, the bikes that have won owe their success to the incredibly fit and talented racers riding them, but it's interesting to see which bikes have featured on the top step of the podium the most often. We did this last year and the Cervelo S5, thanks to Mark Cavendish, was the most successful bike of the 2016 Tour. Let’s see how the 2017 race compares. 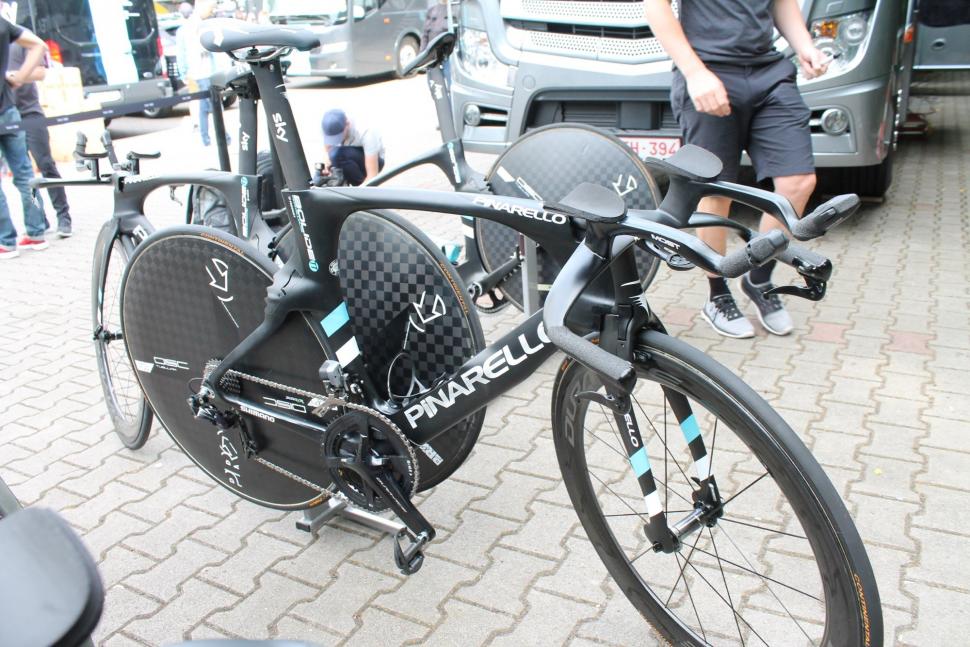 The Welshman won the opening time trial around Dusseldorf aboard the Pinarello Bolide, Team Sky’s current time trial bike of choice. Thomas was so quick we didn't manage to photograph his bike, so here's a pic of Froome's bike, which part from a few details is pretty much the same.

The first of the German sprinters five stage wins, and he did it aboard the new Specialized Venge ViAS with disc brakes, going down in history as the first rider to win a stage of the Tour de France using disc, not rim brakes. After all the drama surrounding the introduction of disc brake into the pro peloton, this seemed to go sort of under the radar with little mention on social media.

The World Champion notched up one stage win before his dramatic exit the following day. What was impressive about this win is that he pulled his shoe out of his pedal, yet managed to clip it back in and surge across the line ahead of his rivals.

His bike of choice was the brand new Specialized Tarmac, which launched just before the race, and ushers in the lightest Tarmac to date, with a bunch of extra aero and comfort features. The bike had rim brakes, direct mount in this case, as the Tarmac Disc that is on the UCI list hasn’t been seen in public yet. 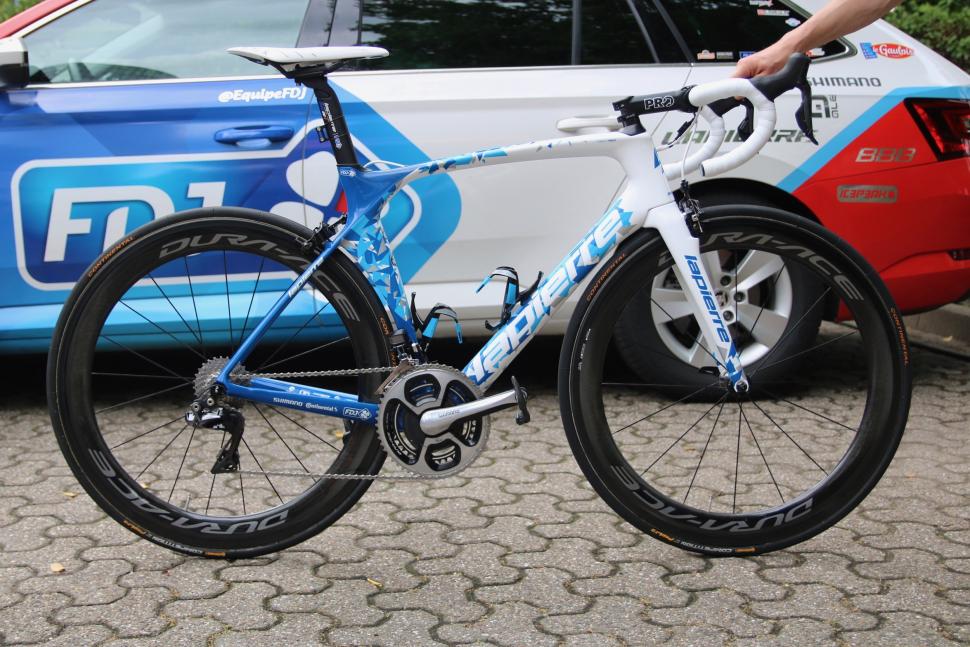 The stage that will be remembered for the clash between Mark Cavendish and Peter Sagan, with the former out through injury and the latter ejected by the race commissaire, it’s worth remembering that a Frenchman became the first to win a bunch sprint since 2006.

His FDJ team is sponsored by French bike company Lapierre and he was riding the new Aircode SL, an all-out aero bike. It’s an updated version of the previous Aircode and hasn’t been officially launched yet, so we don’t have all the exact details on it just yet, but we’re guessing it’s more aero, likely stiffer and more compliant as well than the old bike. The pictured bike actually belongs to Thibot Pinot, but it's essentially the same as Demare's bike.

After several flat stages Italian national champion Fabio Aru lit the fireworks on the summit finish of La Planche des Belles Filles and behind him, Team Sky’s Chris Froome rode himself into yellow for the first time. Fabio Aru’s bike is the brand new Argon 18 Gallium Pro from the Canadian bike brand. Have a guess at the changes over the previous model? It’s lighter and stiffer, with a 794g frame weight.

The German notched up his second stage win and once again was on his disc-equipped and customised Specialized Venge ViAS.

In one of the closest sprint finishes we’ve probably ever seen, Marcel Kittel just overcame the charging Edvald Boasson Hagen by just 6mm. Once again he was on his Specialized Venge ViAS Disc, the disc brakes clearly not slowing him down much in the race for the line. 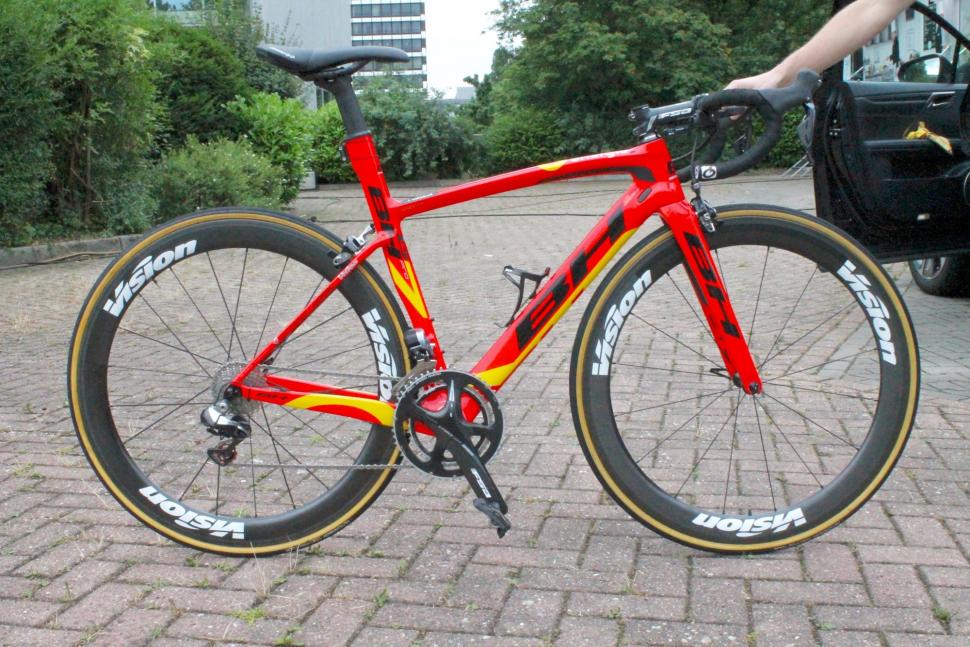 Lilian Calmejane bagged the second French stage victory by attacking the final climb of the stage, and he was riding the brand new BH G7 Pro

aero race bike that we took at look at before the race started, albeit Thomas Voeckler’s race bike. Unusually the new bike is a rim brake version of a previously launched disc brake bike, with all the usual aero features we’re now accustomed to seeing on aero bikes.

Another dramatic stage and Colombian Rigoberto Uran managed to put his Cannondale SuperSix Evo across the line first in an extremely close finish with Warren Barguil, despite only having two working gears. Cannondale is one of the few teams that has been racing disc brakes in select races this season, but apart from the opening time trial there’s been no sight of SuperSix Evo Disc race bikes at this year’s Tour.

He’s making a habit of winning bunch sprints in all sorts of ways. The one thing that ties all his wins together is that he raced the same Specialized Venge ViAS with disc brakes and a custom paint job.

This is getting repetitive now. The peloton caught a three-man break in the final 250 metres and Kittel pounced to claim his fifth, and final, stage win at the 2017 Tour de France. Each of his five stage wins was aboard the Specialized Venge ViAS Disc.

On a stage that saw Chris Froome lose the yellow jersey to Fabio Aru, potential Tour winner Romain Bardet gave France its third stage win in this year’s race. His AG2R team is this year sponsored by Factor Bikes, a company with British roots, having stepped up from sponsoring One Pro Cycling last season. This was the first Tour stage win for the small bike brand with big ambitions, confirming the credentials of the O2 race bike Bardet used. 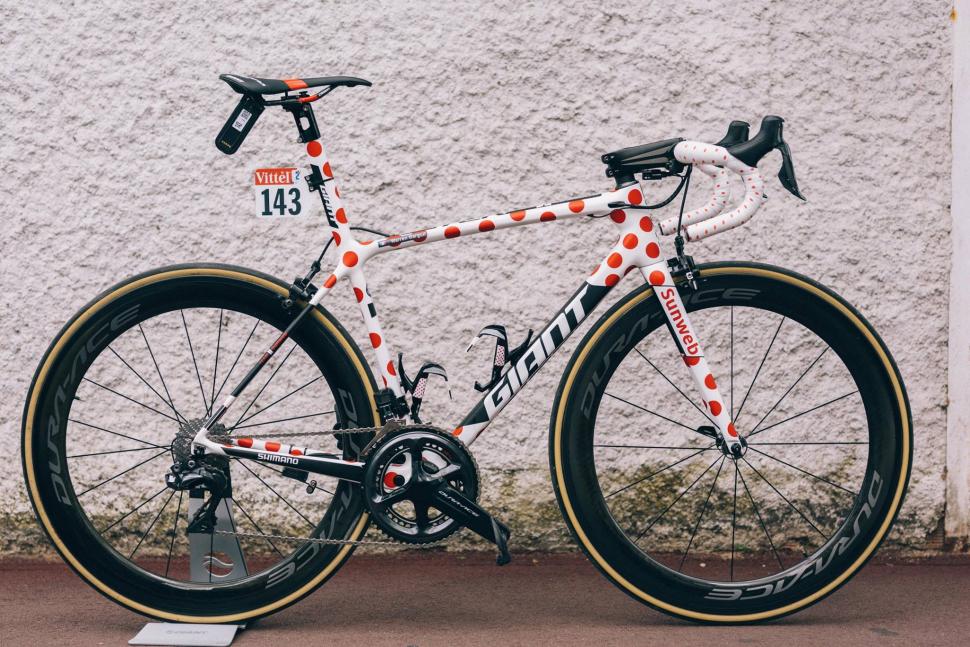 The French are getting used to home winners in this year’s Tour, with Warren Barguil winning the shortest stage in the race that lead to plenty of attacking from the off. It’s the first win for Giant Bicycles in this year’s race, with Barguil opting for the TCR Advanced SL, the lightest and stiffest bike the Taiwanese company offers.

One stage win for Giant Bicycles wasn’t enough, Aussie sprinter Michael Matthews put his TCR Advanced SL across the line first on the finish of a stage that would see Chris Froome take back the yellow jersey from Fabio Aru. 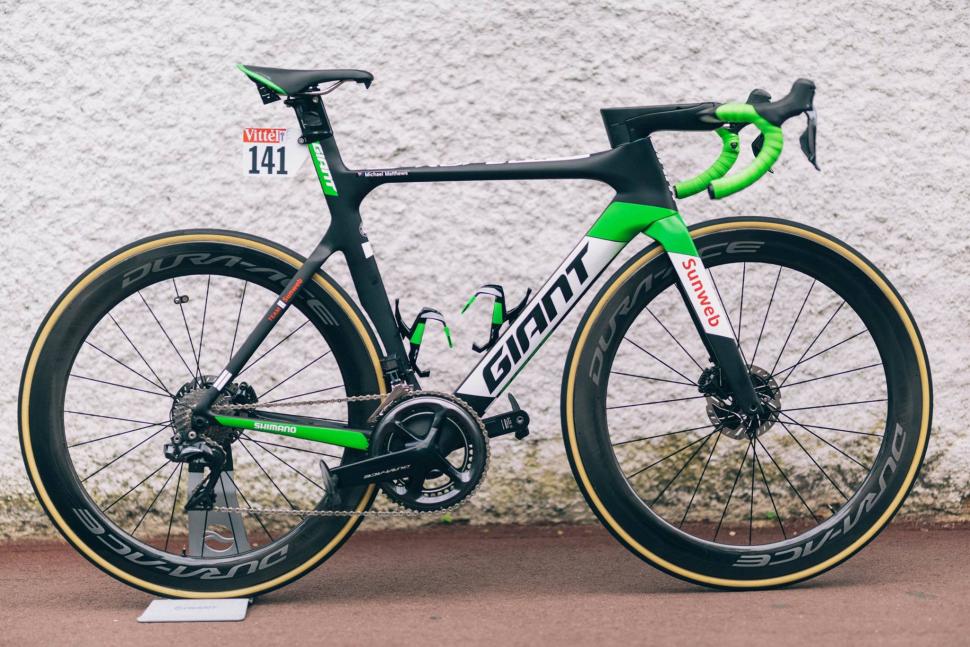 While Team Sunweb and Giant quietly revealed a disc brake version of the Propel before the race got underway, Matthews actually won this stage on a TCR Advanced SL, the same model as team mate Barguil rode to victory the day before. He has been spotted riding the Propel Disc on some of the flatter stages, however, but probably because stage 14 had an uphill finish he choose the lighter bike. 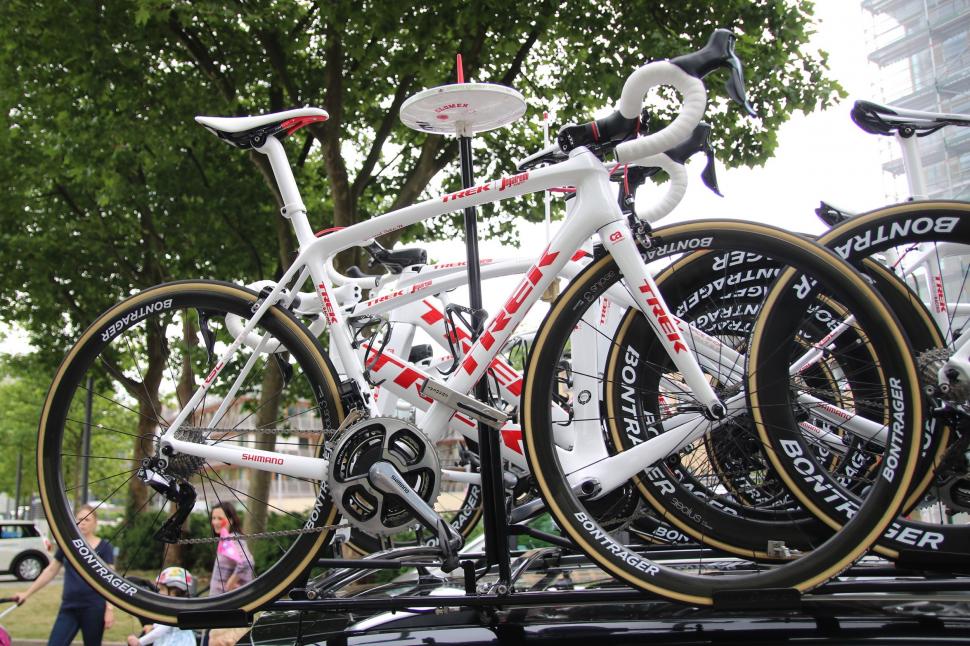 Trek used the Tour de France, basically a massive show window for the dozens of bike brands involved in the sport, to launch the new Emondo. Lighter than the previous version weighing a claimed 640g, it was the bike that Bauke Mollema used to win so convincingly on stage 15. The Emondo is also now available with disc brakes but we’ve not spotted any of the team using discs. With such a light frame it’s highly likely the team mechanics have to add lead weights in order to meet the UCI’s 6.8kg minimum weight limit. 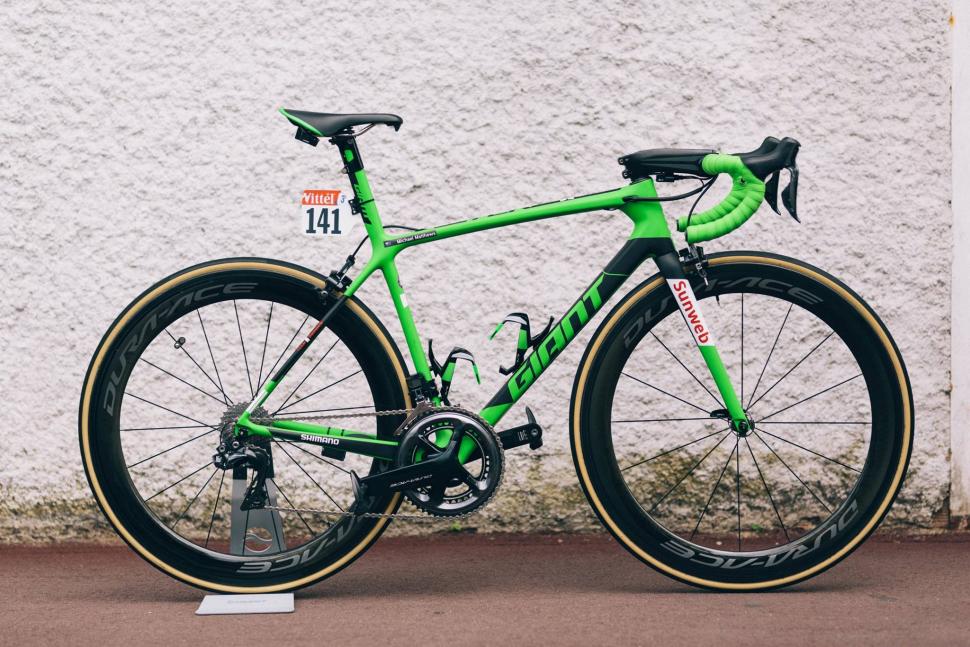 Another win for the Australian sprinter and the third stage win for Giant Bicycles. However, rather than the Propel that he was racing earlier in the Tour, for this stage Matthews was riding the TCR Advanced SL. It’s the company’s lightweight all-rounder and doesn’t offer the aero advantage of the Propel, Giant’s go-to aero race bike, but that didn’t appear to hold him back much - he still held off John Degenkolb on the very aero Trek Madone. 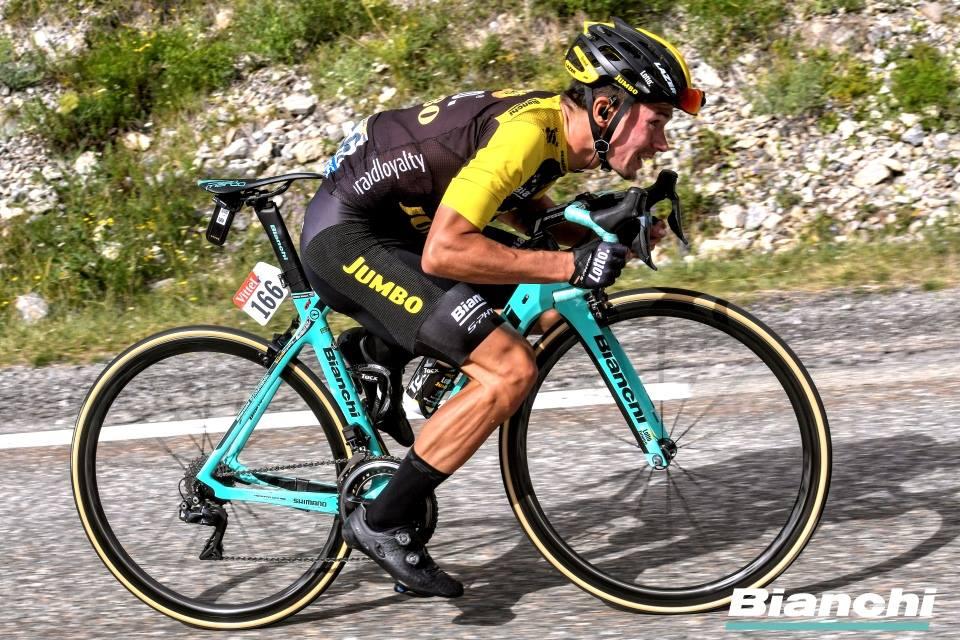 What an exciting day of racing this was, with the mighty 2,642m tall Galibier providing a cradle of fiery cycle racing. On a stage when Marcel Kittel dropped out of the race and Alberto Contador and Dan Martin attacked, ex-ski jumper Primoz Roglic became the first Slovenian to win a stage of the Tour de France.

It also marked the first stage victory for Italian bicycle brand Bianchi, which his choice of steed the aero Oltre XR4.

Team Sunweb, mainly thanks to Warren Barguil’s phenomenal climbing ability, has given Giant Bicycles a very successful Tour de France, with four stage wins, and adds to its overall victory in the Giro d’Italia with Tom Dumoulin.

After missing out in a stage win by a scant 6mm against Marcel Kittel earlier in the race, Edvald Boasson Hagen finally gave Team Dimension Data and bike sponsor Cervelo reason to cheer. 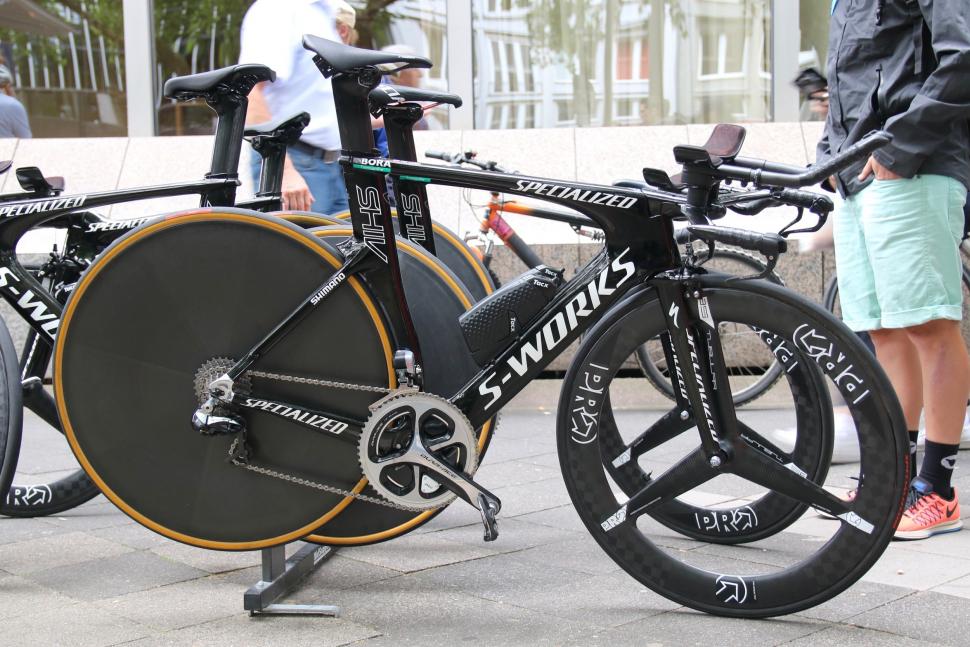 Apparently, the Bora team have been putting Peter Sagan’s bike out with the others every morning, maybe in the hope it would inspire the rest of the team? It took until the final proper stage of the race for Bora’s second victory, with Maciej Bodnar racing his Specialized Shiv to the fastest time around the 22.5km Marseille time trial course. 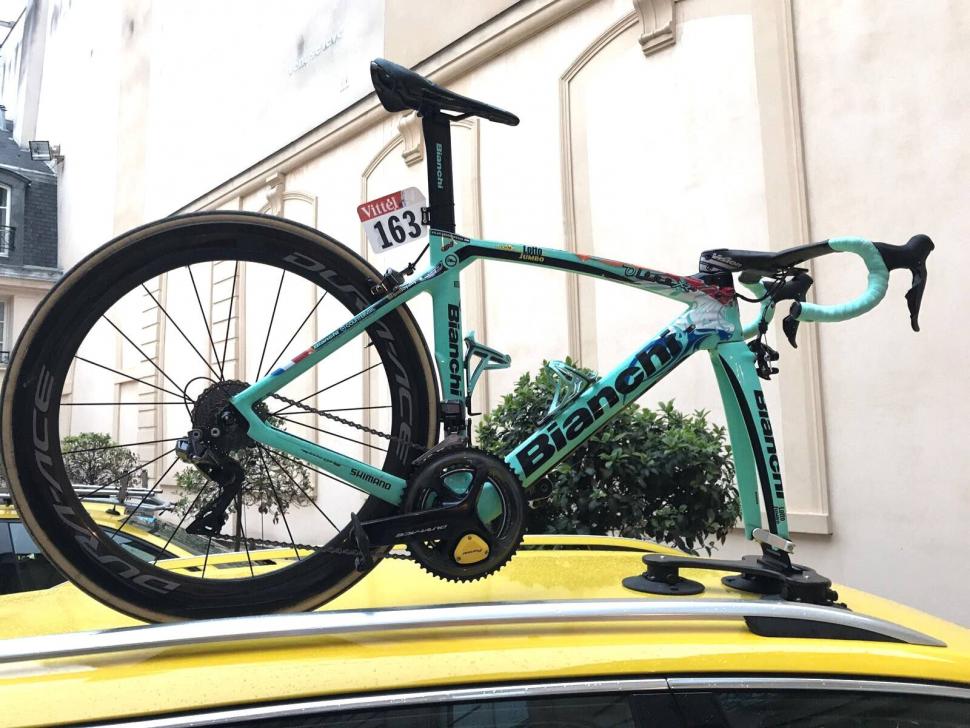