Ever gaze into the distance and wonder what the road bike of 2035 might look like? Don't worry if you don't, it’s something bicycle designers appear to do quite often if this collection of concept bikes is anything to go by.

Concept bikes are designed to be attention grabbers, they very rarely go into production. Which is a shame as some of these look like fun. Some of the designs are clearly bonkers for the sake of it, but some do look like a lot of time has gone into them and could actually work.

In no particular order, here are some of the maddest and most interesting. 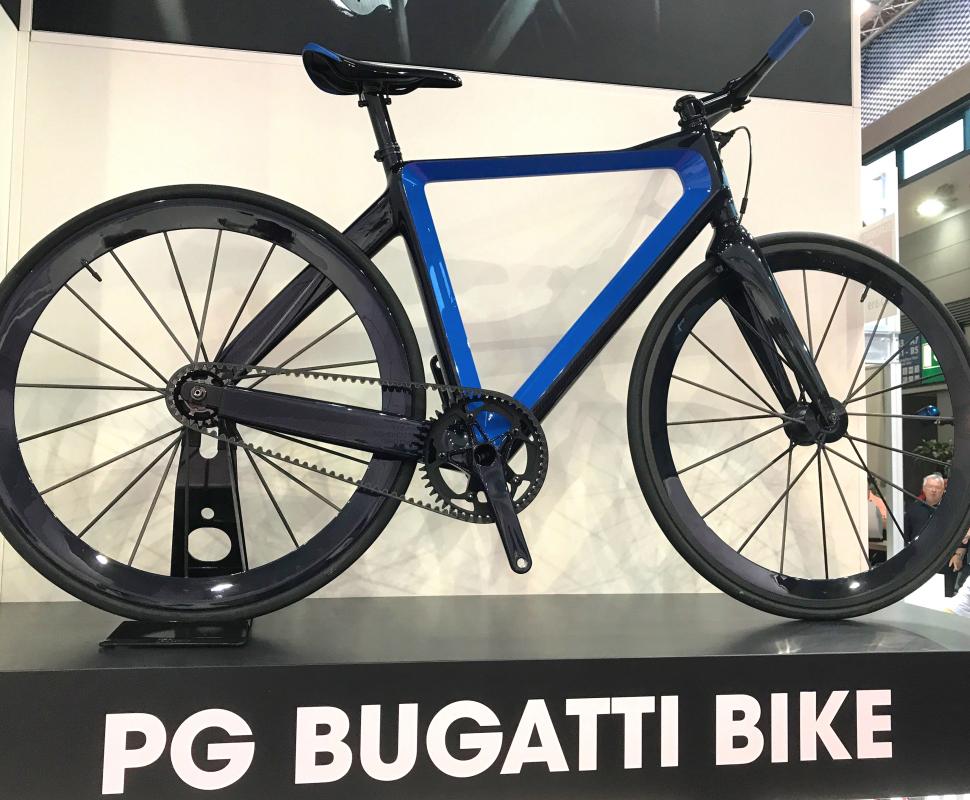 Nominally, the PG Bugatti town bike we spotted at Eurobike in 2017 is actually for sale, but it's a more-than-slightly-bonkers £35,000. And that's for the base model; custom versions run up to £69,000. It's claimed to be the lightest urban bike ever, at just 5kg thanks to high-zoot components like the Lightweight Meilenstein wheels. Just the thing to go with your two million quid car. 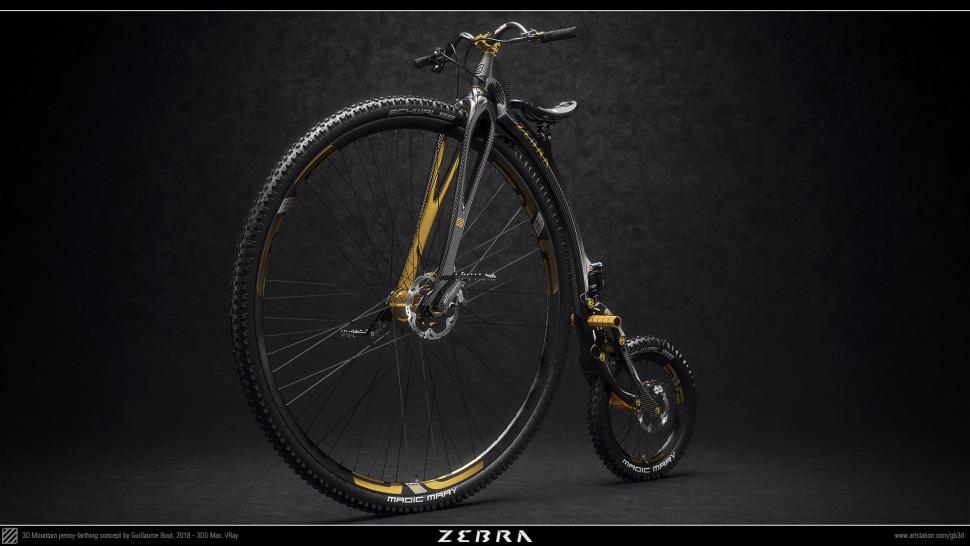 Computer graphics artist Guillaume Bout reimagined the classic Victorian-era Ordinary bicycle (aka penny-farthing) as a modern, off-road ready machine, complete with carbon fibre frame and suspension for the dinky trailing wheel. The level of attention to detail he's created in his renderings is simply amazing, with an uncannily lifelike look and well-thought-out technical details. 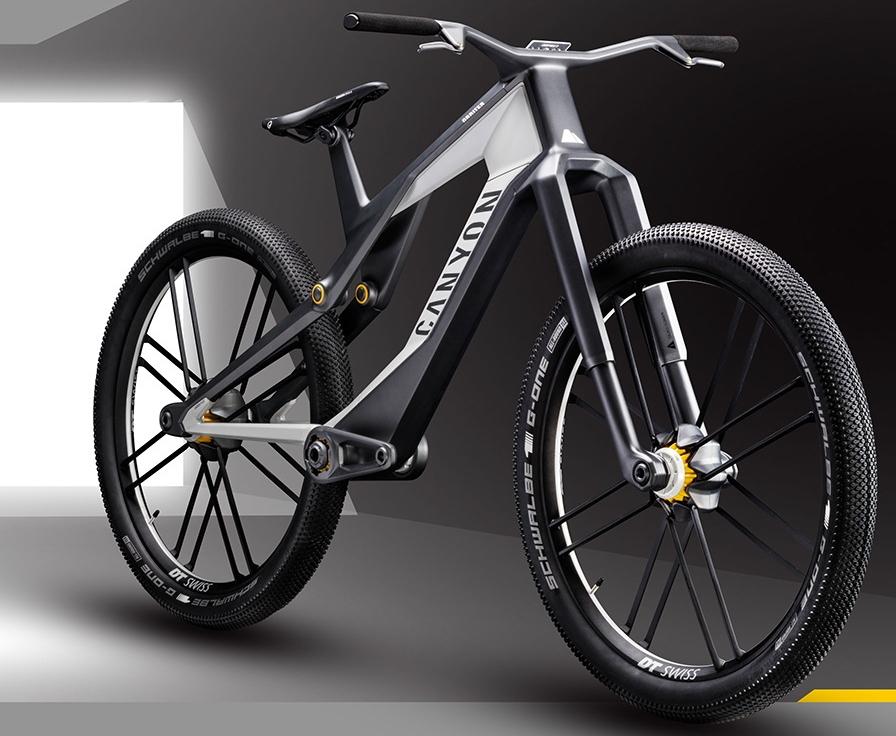 They love an eye-catching concept bike at German direct-sales specialist Canyon: this is one of three of their bikes in this round-up. Designed by German university student Daniel Frinz, it's an 'urban gravity' bike, intended for plummeting through the alleys of towns that cling to steep mountain sides, or just whizzing down your local bike park's trails and getting back up easily under power assist.

Slightly mad features include twin hub motors and an electric transmission: the cranks would turn a dynamo, which in turn powers the wheels. It could be the future. 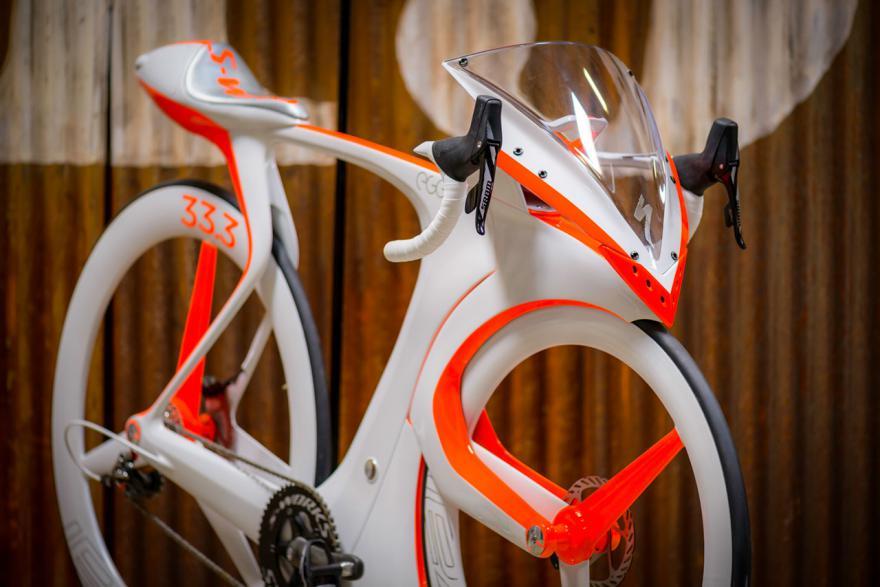 “The UCI really caters to a very small population,” says Egger, “but there're so many other people out there who couldn’t care less about the UCI. They don’t follow the racing and they don’t even know all the limitations that are put on bikes for the UCI riders. So, my feeling was let’s design a bike for someone who really just wants to go fast on a road bike," said Egger. 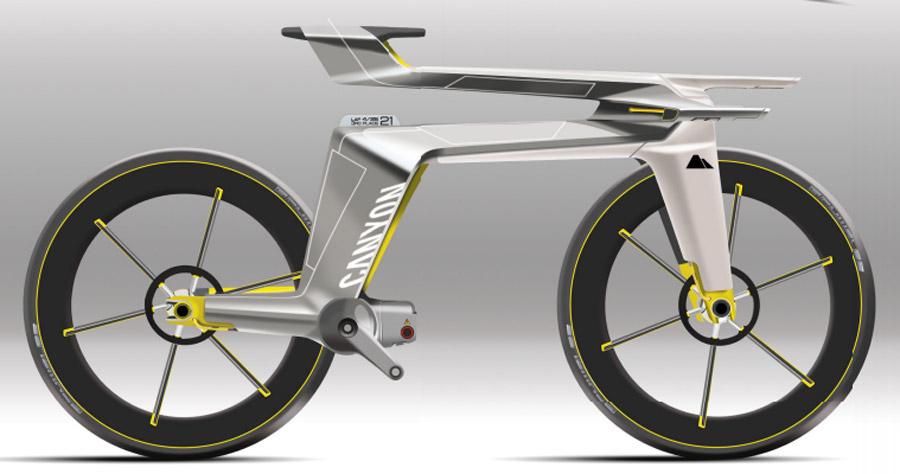 Canyon’s recent Eco Speed concept bike is an e-bike powered by a hydrogen fuel cell and featuring disc brakes, a concealed drivetrain and front and rear suspension. Looks like something Robocop would ride doesn't it? 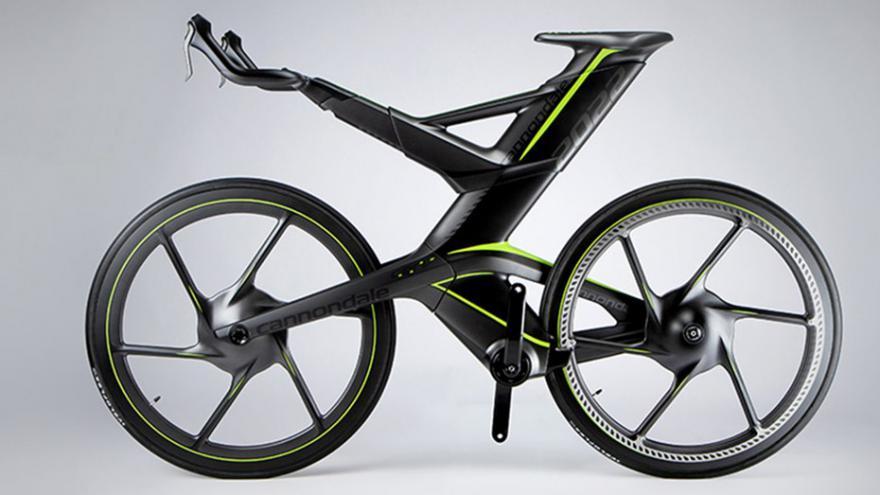 Cannondale has produced some controversial bikes over the years.  The CERV (Cannondale Ergonomic Race Vehicle) pointed to a possible future of road bike design. It features on-the-fly adjustable geometry so it could swap from an aggressive race bike to a comfortable endurance bike. 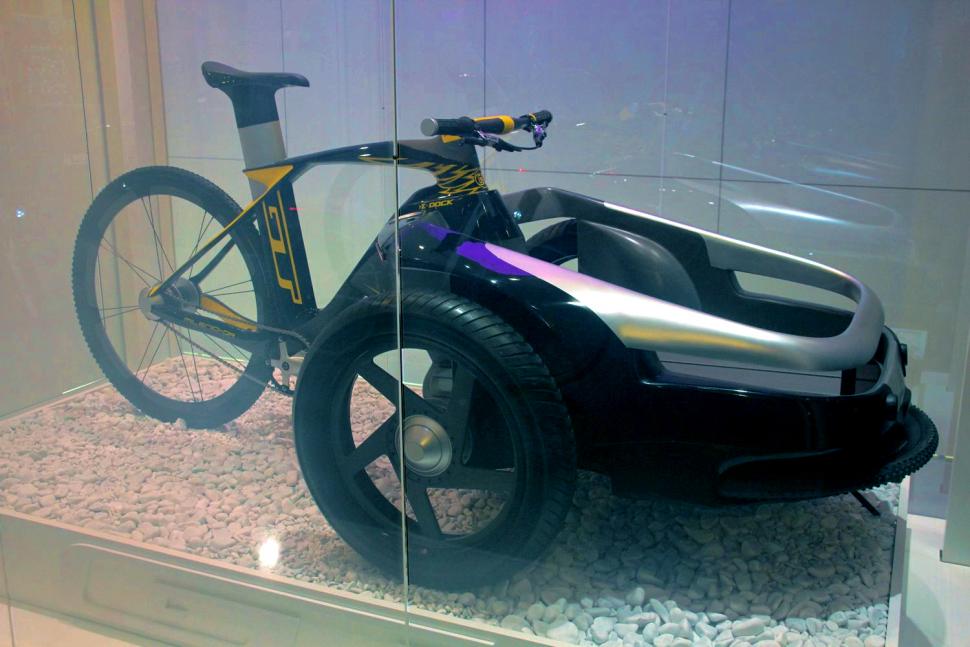 There’s a lot more interest in utilitarian and cargo bikes these days, and this novel GT Mileno could transform from an urban road bike, with electronic shifting and hydraulic drum brakes, to a cargo bike with a module that bolts to the front of the bike. It has two powered wheels to ease the strain when fully loaded. 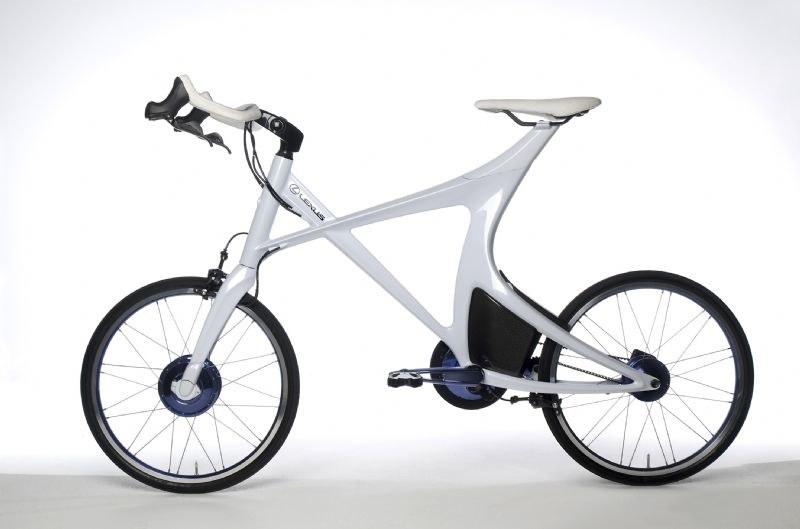 There have been plenty of slightly bonkers concept bicycles from the car industry, and we probably haven’t seen the last of them. This from from Lexus back in 2010 combined a carbon fibre frame with small wheels and an electric motor and regenerative braking. 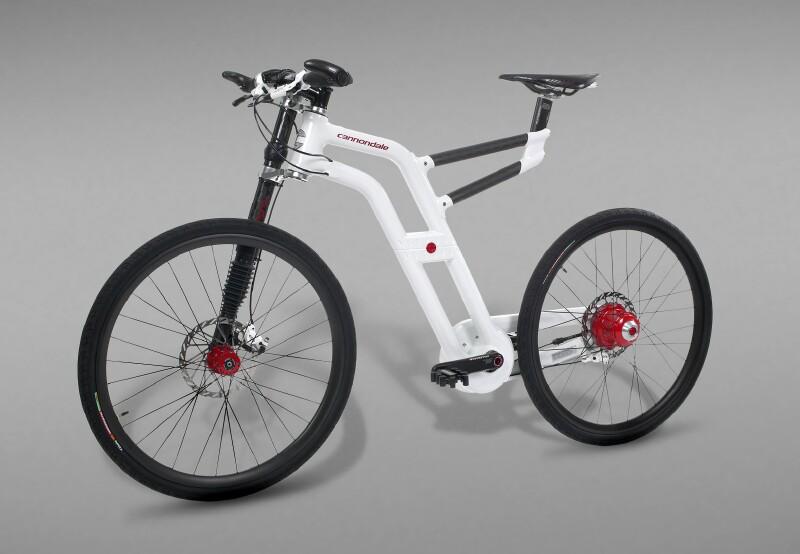 Cannondale again, this time a concept folding bike that isn’t small like a Brompton, but more akin to a regular sized road bike. The hinge is button operated and it folds in half to make it a portable size. We've come a long way since 2007 when this bike was first shown, but there are some similarities with the new Slate... 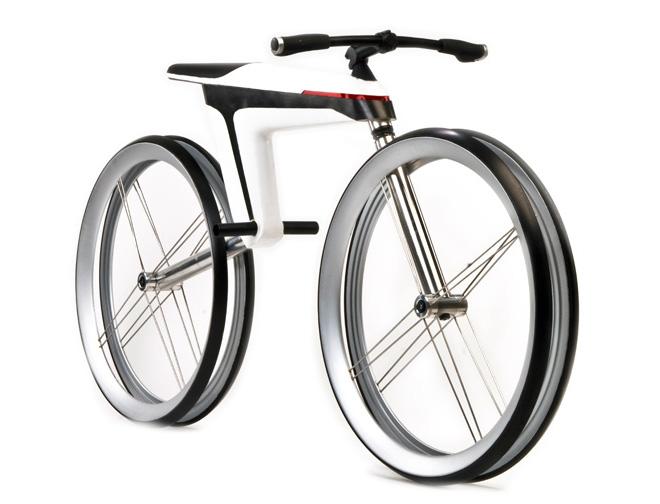 This sleek looking bike featured a carbon fibre frame but uses the conductive properties of the frame material as a power distribution network to supply electricity created by regenerative braking to motors between the rims. 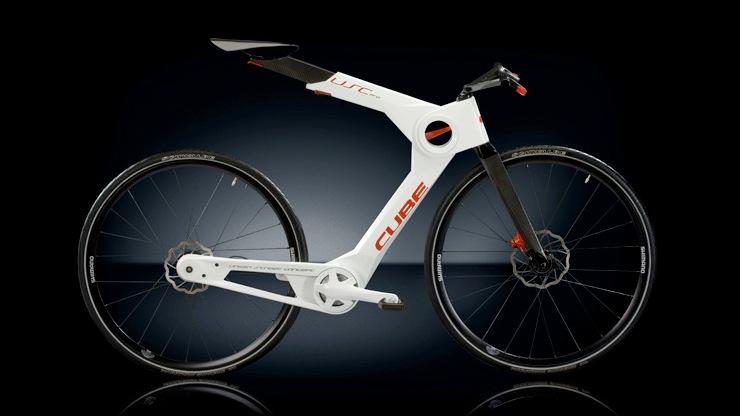 Urban bikes have always interested bicycle designers when it comes to concept bikes. The Cube Urban Street concept was a folding bike small enough to fit in a rucksack, but which is the size of a regular road bike when folded out. The lights were fully integrated into the frame with a front wheel dynamo powering them.

The bike inspired by a Porsche 911 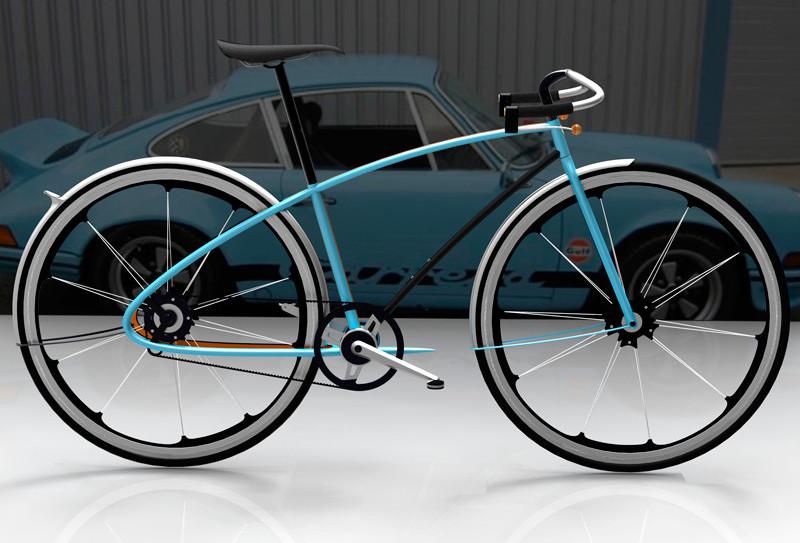 David Schultz, Senior Lead User Experience Designer for Microsoft, took inspiration from the 911 and came up with this urban commuter described as a “fast, lightweight, simple, tough and timeless” design - it certainly looks all those things. 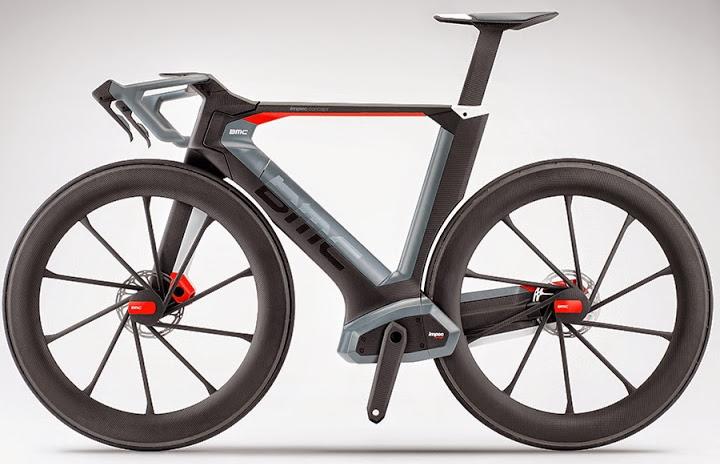 Swiss bike brand BMC isn’t afraid to think outside the box, as this creation from a couple of years ago proves. It’s created by the company’s Impec advanced research and development lab and is perhaps how road race bikes would look if there were no UCI rules. Disc brakes, a low-slung aero frame, concealed drivetrain and an integrated computer head unit are the key features of this bold design. 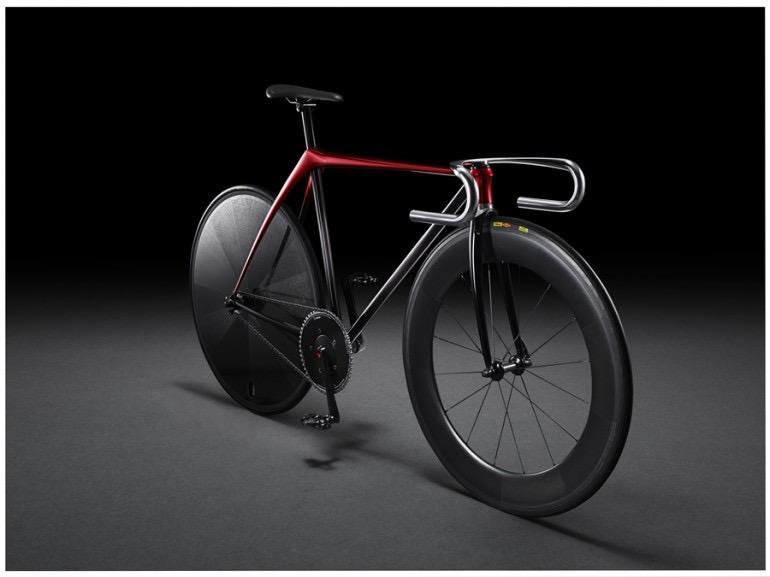 Another car manufacturer dabbling with bicycle design again. This striking track bike from Mazda was apparently created from a single sheet of metal for a very sleek and minimalist design. One of the more realistic concepts we’ve seen over the years. 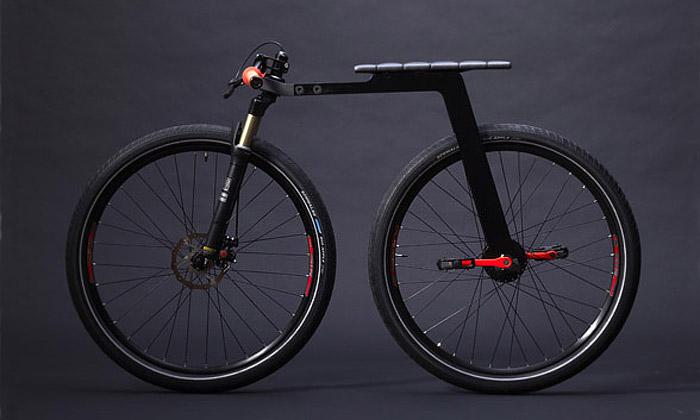 Urban bikes come in all shapes and sizes, and this one, designed by a design firm in Michigan, redefines what we normally expect to see in a bicycle. It looks like a shrunken mountain bike,  there’s almost no frame to speak off, pedals attached directly to the rear wheel and a front disc brake for slowing down. 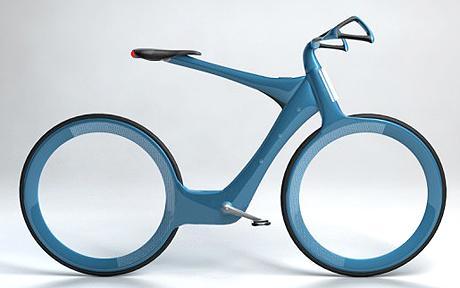 In 2009, Chris Boardman unveiled an intelligent bike concept that would be clever enough to track calories burned as you ride, with a solar-powered motor when you need some assistance and a full carbon fibre frame with spoke-less wheels and puncture-proof tyres. This was his vision for bikes that we’d all be riding in 2029. 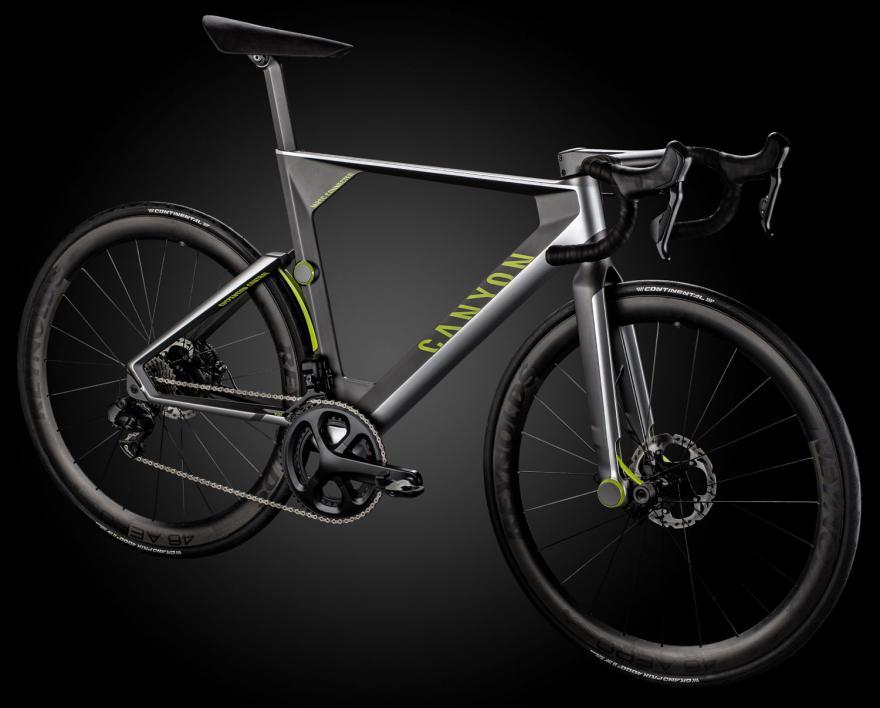 Canyon showed a glimpse of a fully connected future with its MRSC bike a couple of years ago, and actually some of the technology might be closer to production than you think. It has on-board telecommunications and it’s fully GPS-enabled so it knows where you all and tracks your rides, and can be used as an emergency call system in the event of a crash. 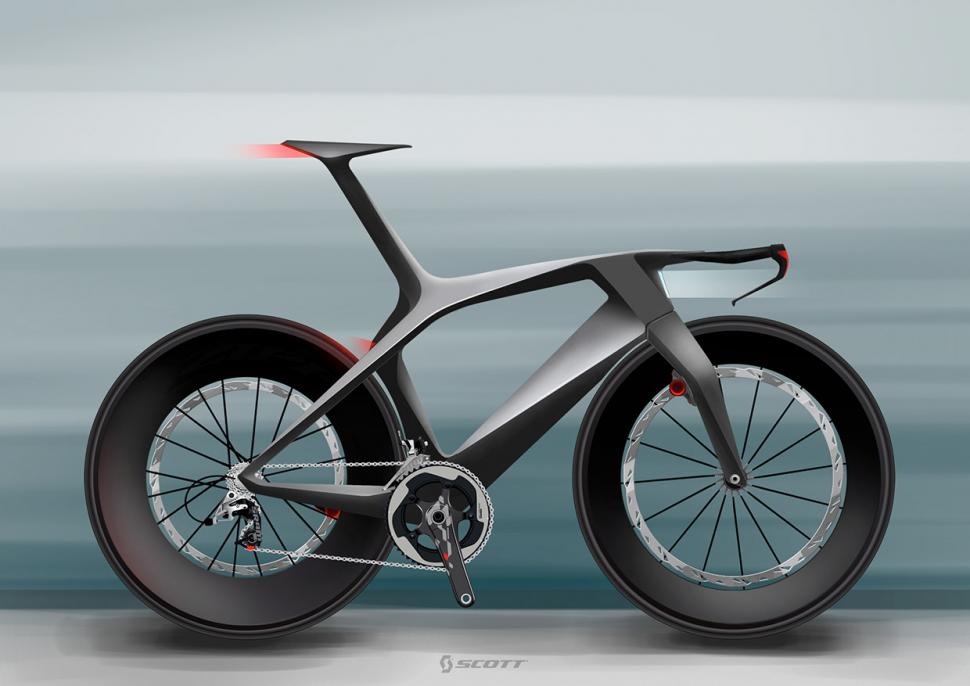 Maybe one of the more realistic looking concept bikes in recent years, this one from ex-Scott designer Julien Delcambre looks ready to ride. With a low profile frame clearly designed to be fast in a wind-tunnel and with hidden brakes and very deep section wheels, it sure looks rapid. The next Foil aero road bike perhaps? 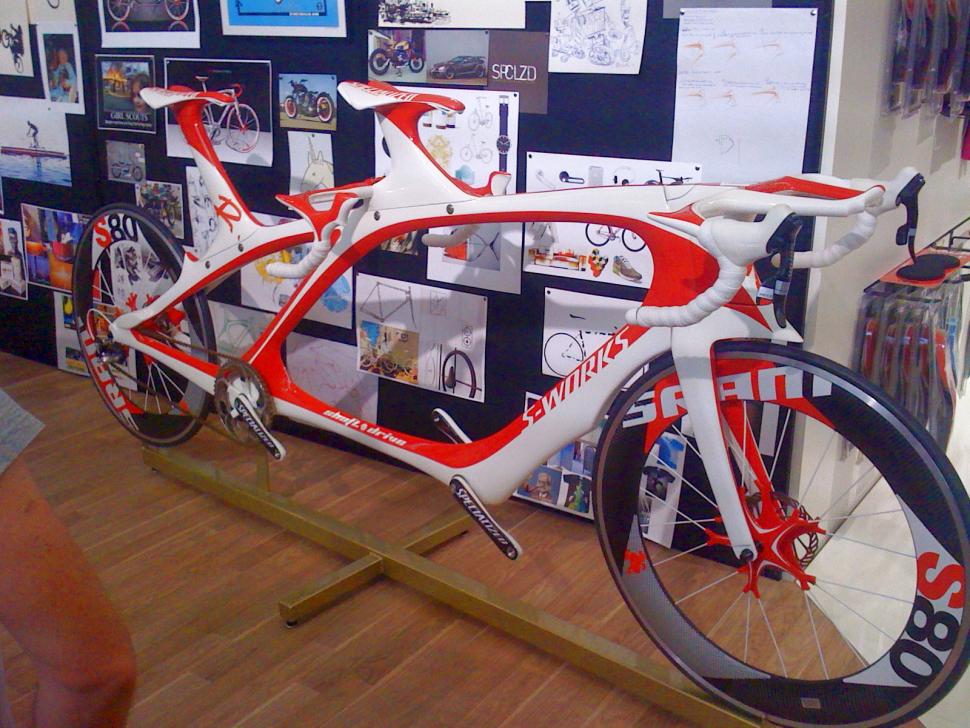 Specialized showed this marvellous hunk of two-rider insanity at the 2010 Eurobike show. It has a concealed shaft drive connecting the two cranksets and the all-in-one seat/seatpost/rear handlebar units can be removed so it can be customised for each rider. Specialized design honcho Robert Egger has apparently ridden it with Fabian Cancellara as stoker, which must have been like strapping on an engine. 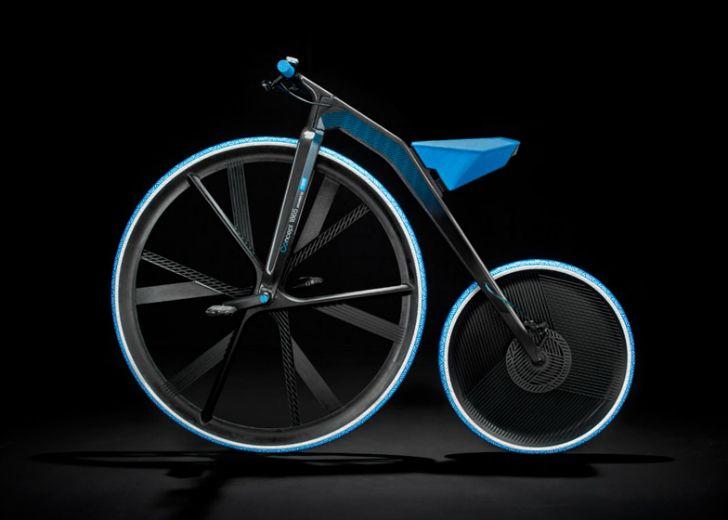 Another recent concept this one, we saw it at the Eurobike show. It’s a collaborative project between plastics giant BASF, product designers Ding 3000 and carbon magicians THM Carbones, and is basically a carbon fibre penny farthing. 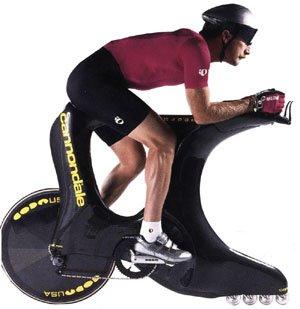 We’ve saved the most bonkers concept bike for last here, and take a bow Cannondale. We don’t think this concept has ever been bettered. If you ever wondered what a bike would look like if spliced with an inline skate, well here is your answer. The best of both worlds? Possibly not.

What makes this bike truly bonkers is that Cannondale didn't just mock it up and plonk a guy on it for photos.This is a rideable prototype. Well, in theory anyway. Cannondale's director of product marketing told BikeRumor: "This was a prototype that sought to increase aerodynamic efficiency by eliminating the big rotating front wheel, but in doing so, it also eliminated a major source of bicycle stability. The only person I ever saw successfully ride this for more than a few meters was champion trials stud, Libor Karas."

Which is your pick?