Most of us will have heard of Bianchi Colnago, De Rosa and Pinarello Italy's successful international bike brands, but there are other great Italian bike companies with a long history too, Casati, Guerciotti, Carraro, Bottecchia and Basso may be not so familiar but they've been around a long time too … and new ones like Guerra, Montante, and NoBrain that you won't really see outside of Italy. To find out what they are up to you need to go to Milan.

So that's what myself and Vecchiojo (an Italian-sounding name could have proved useful) hit the road south and after adventures with buses, trains and travellators (which you can see more of in our Milan videos - there's four of them) we grabbed a mighty haul of pictures and got an up close and personal look at some very different bikes.

These days Milan is a very Italian show, and while there were of course a few foreign brands present the only ones that stick in the mind were Look and Shimano other than that it was wall to wall Italian… You might think that Italy's biggest bike show would be stuffed with high end road bikes and of course there were plenty on display, in our first gallery we've got some choice bikes from Colnago, De Rosa, Guerciotti, Guera, Bottecchia, Basso, Casati, Fondriest and more and yet even they were outnumbered by the vast legion of urban/tourer/fixed/shopping/roadsters in every possible permutation. So here's just some of what caught our eye… 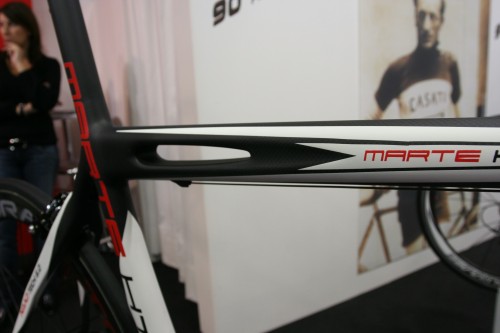 For me the show season isn't complete unless I've seen a bike with a seemingly inappropriate hole in it. This year Casati weren't at Eurobike and I had to go to Milan for my fix. There we found the Casati Marte HT – the top end bike with a hole from the house of Casati. I'll have to take a look back through some old pics but I'd swear that hole is getting bigger. As well as the hole this Marte HT came specced with a 53-39 Campagnolo Super Record set up down tube internal cable routing for the gearing, routing the cables internally through a top tube with a hole in it would at the very least spoil the aesthetic so the rear brake cable takes a more conventional route underneath. This is an Italian bike so it does have an integrated seat tube – different but not that different. Casati had more to show than holes this year – it's the company's 90th anniversary and to celebrate they had two eye-catching limited edition bikes: one in black carbon and Dura Ace with lots of gold finishing kit, and one in white pearlescent steel with lots of gold finishing kit. No expense had been spared on the latter with Campag Super Record everything and Campag Shamal wheels. The whole effect was slightly over-powering, but not anywhere near as bad as it sounds. What I liked about the steel frame was that although it was quite a classic looking design Casati incorporated some modern features such as internal cable routing so that it didn't come across as an exercise in retro-chic. Whether it was an exercise in good taste is another matter, but it was their birthday so let's give 'em a break. Following on from Casati it's tempting to say something along the lines of “and now from the sublime to the ridiculous” when looking at NoBrain, tempting but wrong. By the standards of the show these guys were purists – their fixed were fixeds and their road bikes were road bikes with no blurring of the boundaries in between… and no raiding of papa's 70s parts bin. NoBrain were making most of a splash with there fixed bikes but their big deal is personalising bikes to order to show what they could do they had a lugged steel frameset, a wildly over-built looking prototype alu fixed made from hydroformed aluminium and their Le Shizzle freestyle fixie in an eye-burning green and orange combination, they also had some pretty straight looking road bikes too and a range of coloured components. Mr NoBrain was keen to show us his custom engraving capability, (one of the themes of the show) so you can supply him with a name, logo or whatever, and he will have it engraved on to your bike – check out the fork crown on the Officina Girardi steel frameset as an example. While it's probably fair to say that even the big boys of the Italian cycling industry aren't quite at the very cutting edge when it road bike technology, they and their lesser known Italian rivals are still not far off and they certainly know how to build an eye-catching bike – even if some of them have not heard of the maxim that less is more when it comes to logos, names, colours… the use of gold paint. De Rosa though are masters of restraint, our eye was caught by their THL time trial bike – which I don't remember seeing at Eurobike, and it would certainly be in keeping for them to hold something back for their home town show. That Pista doesn't get any lesss good looking either. 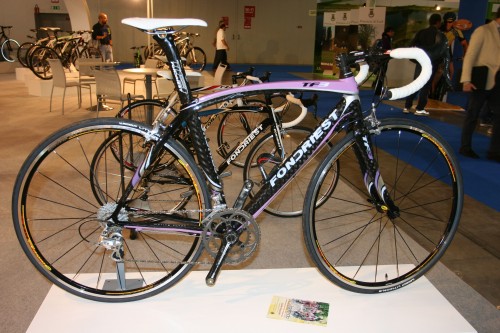 Fondriest too pass the taste test – even with the lilac covered version of their TF3 road bike, a nice looking bit of kit which put me a bit in mind of the Specialized Tarmac. Fondriest were at last year's London Cycle Show, but they weren't there this year so we presume they've pulled their horns in a bit as far as Blighty is concerned for 2010… there was no-one on their stand to tell us. 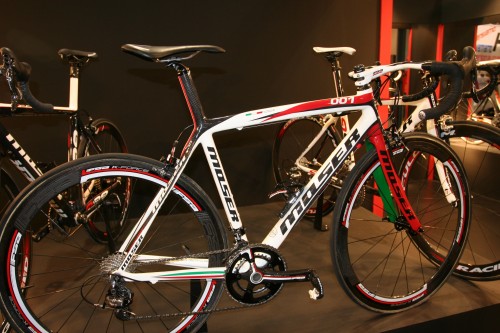 Moser were running for the door by the time we got to their booth at Eurobike what we missed were the snappily titled 001, 999 and 666 the three star bikes in the range. The 001 had all the hallmarks of a range topping Italian bike, Super Record Groupset, curvy top tube (but not too curvy) and an integrated seat mast, the 666 looked to be basically the same bike but with a standard seat post and Dura Ace, and the 999 was the more straigh line version of the 666. Guerra are a new brand built on some old Italian racing heritage – Learco Guerra – the Human Locomotive – won and wore the first Maglia Rosa at the Giro d'Italia in 1931(they had it on the stand). The bikes that bear his name are the result of a licensing deal between his nephews and Italian bike firm Ciclos Elios. The Antea is the range topper, you guessed it, swoopy lines, compact geometry, carbon and very easy on the eye, especially the blue one, we also like the Apex which was even swoopier still. We didn't spot a retro steel bike on the Guerra stand, but maybe we didn't look hard enough, because front and centre next to the curvy carbon pretty much everyone else had retro steel fixed often in beige (Bottecchia) or baby blue with brown leather finishing kit (Basso), Bottecchia went a stage further too with the bike that won the road world championship in 1966. Two bikes with even more pedigree were on a stand devoted to Fausto Coppi as well as his bikes (check the fork rake and the front changer in our pics) there were other momentoes of Il Campionissimo on display too including his jersey. There was a lot of bicycle gender-bending going on at Milan but nobody did it with as much style as the people from Montante, from single speed shopping bikes with disc brakes and one mighty basket to a very lovely looking 20in flat bar performance job in carbon, just about the only bike they didn't have was a high end road model, but they had some sort of permutation of pretty much every other bike type – light on logos but certainly not afraid of in your face colour schemes and liberal use of newspaper holders. Personal favourites were the singlespeed/fixed with front disc brake and the black and gold carbon flat bar bike (mainly for the natty rack). 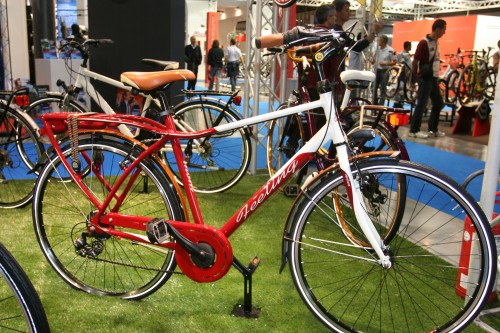 There were loads of bikes for commuting and riding around town on both Carraro and Bottecchia had various roadsters and hub geared urban machines on show, we'll have plenty more in our second gallery, but in this one you can see roadsters from Feeling (at least we think that's the brand name) and urban bikes from Atala who were showing the rather sleek retro-modern Manhattan and the more belt'n'braces Discovery.

If you thought the Montantes were weird watch out for the second part of our coverage of the Milan show when amongst other things we'll be taking a look at some bikes that are so wrong they come all the way around to being right again, well almost. If you cant wait for that though check out our Milan videos to see the whole show in all its glory.