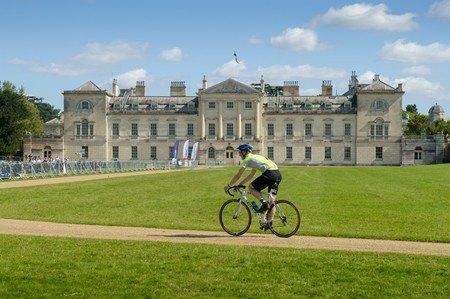 tri for life presents The Woburn Abbey Triathlon, set in one of the most spectacular locations in Bedfordshire. One of the UK's most loved triathlons, it has become famed for its iconic venue and unrivalled family experience. Highlights of the event include stunning views of The Abbey and deer park, great event village and the stunning cycle route through the picturesque roads surrounding Woburn. Now in its 9th year, tri for life has raised over £2m for its charity partners. In 2016, we raised money for Great Ormond Street Children’s Hospital and Melanoma Focus.

2016 saw the event take a leap into becoming of the UK’s largest triathlons with the event expanding to two days of racing and the introduction of a new half iron distance.

Set in the stunning location of Woburn Abbey, with views of The Abbey, Deer Park & lakes
Choice of several triathlon distances
A major tick on your triathlon bucket-list
Great support and camaraderie around the course
Closed road bike course for the SuperSprint, Sprint and Olympic distances (on Sunday)