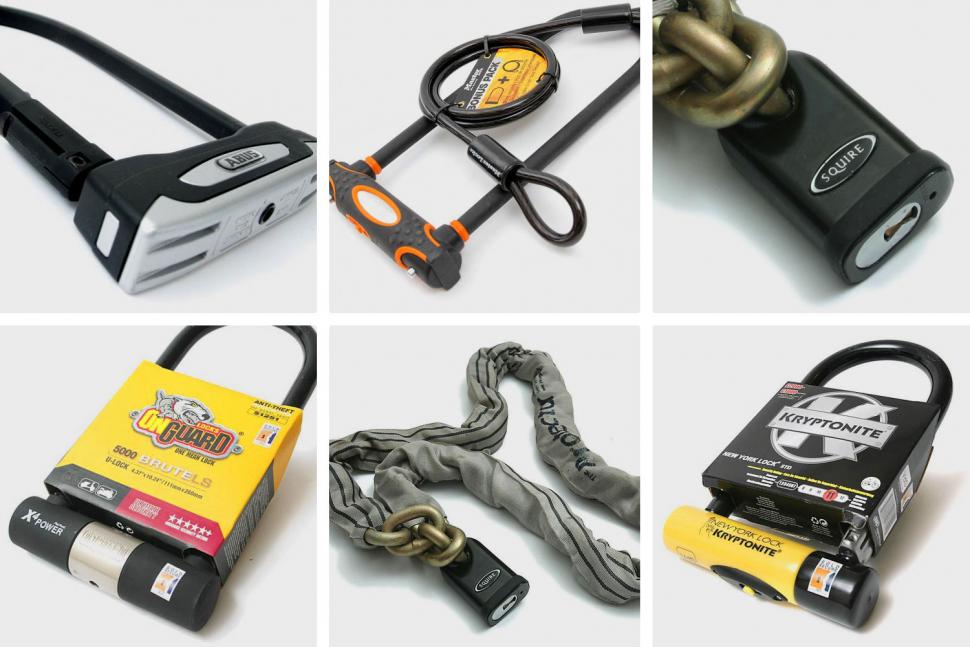 The '80s and '90s saw an arms race between bike lock makers and thieves that eventually settled down when manufacturers figured out how to make locks that would resist everything but hefty portable power tools. Here's our selection of bike locks that have the right stuff.

Welcome to the latest edition of road.cc’s buyer's guide to bike locks in which you’ll find everything you need to know to find the right lock for you, plus our pick of six of the best bike locks.

One technique of your professional thief is therefore to damage the lock so you can't open it, and then come back late at night with the big guns. If you find your lock mechanism made unusable — filled with glue, for example — break the lock yourself. Hiring an angle grinder will cost you about £20 for the day.

That's about the only way you'll quickly get through most of our selection here. The more you pay, on the whole, the longer it takes to breach a lock with unpowered brute force attacks, to the point where a thief won't bother with the best bike locks, but move on to easier pickings. It's a sad truth that the basis of on-street bike security is to make your bike too much trouble so a thief will nick someone else's.

To help you protect your bike, take a look at our Bike Locking Bible.

Sold Secure is the dominant certifying body for locking and other security products in the UK, and its remit includes awarding ratings to bike locks.

The Sold Secure standards go from Bronze to Diamond. According to Sold Secure, this is what they mean:

Diamond is a relatively new standard introduced in response to the rise of e-bikes, according to Sold Secure managing director Dr Steffan George. In the introduction to Sold Secure's 2020 Approved Products list, George says the Diamond standard "is aimed at the increasing popular phenomenon of e-bikes (electric or electrically assisted bikes). Due to their value (which can be significant) we felt that a higher level than Gold was required and hence SS104 Diamond level is being launched in Q1 this year."

Previously, Sold Secure said that the standard levels indicated how long a lock had to resist attack with a range of tools. Gold meant a lock lasted “five minutes with a sophisticated array of tools”. Those descriptions have been dropped, probably because the advent of portable angle grinders renders them moot. An angle grinder will get through most locks in well under five minutes.

That said, Sold Secure ratings are still useful, with the caveat that some quite poor locks still achieve the Bronze rating. If you're going to leave your bike out of sight for any length of time, get a lock that's rated at least Gold, and preferably Diamond.

The following are locks that we've subjected to our own destructive testing using methods commonly employed by bike thieves, and that were sufficiently hard to breach that we'd trust them with our own bikes. 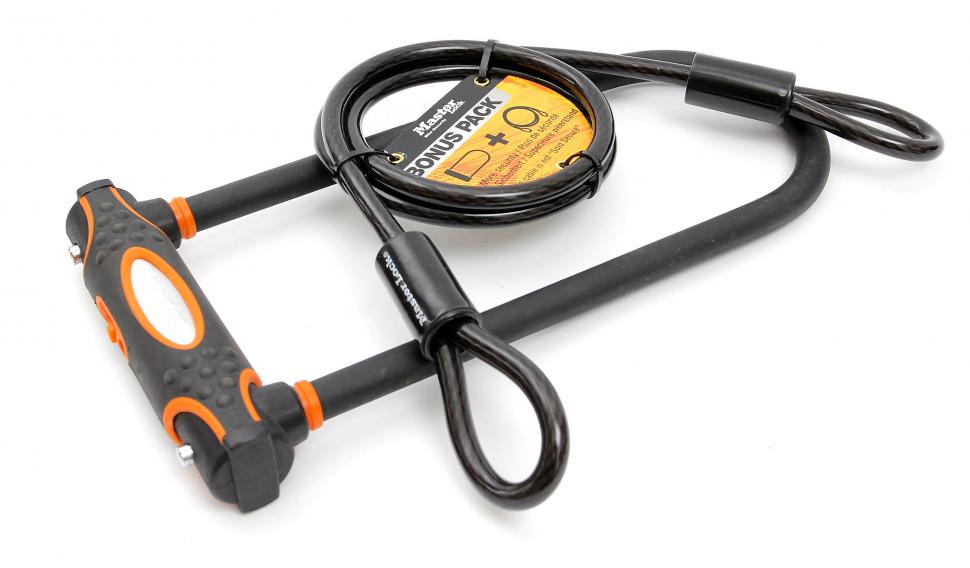 For 25 quid with a cable to help secure your front wheel the Master Lock Street Fortum is very good value in a lock that meets the Sold Secure Bicycle Gold standard. When we tested it, it resisted bolt-croppers and our persuader test, and the lock mechanism is well-protected from assault. For an extra 13 quid you get the larger version with a 28cm shackle instead of the standard 21cm.

It can be broken, of course, but if you want a decent level of security at a sensible price for a round-town bike, it's a good choice.

The Master Lock 8274EURDPRO is rated Sold Secure Gold (for the lock only).

Read our review of the Master Lock 8274EURDPRO 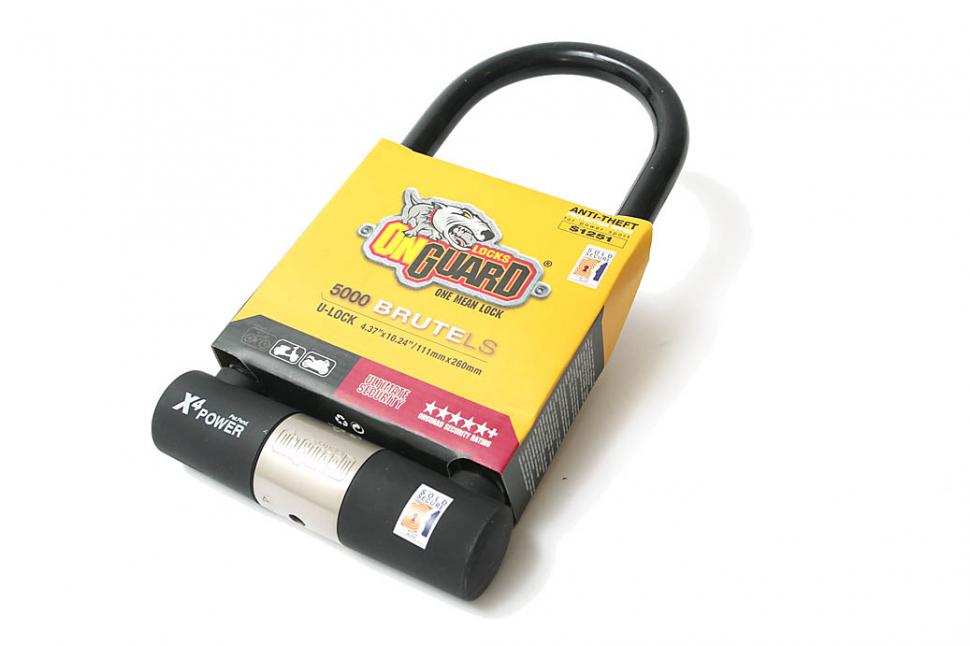 Its RRP is over £40, but the price above is more typical, which makes this tough cookie great value.

The Brute mates a 16mm hardened shackle with a bar made from a single piece of steel, and the locking mechanism is protected against drilling and picking.

In testing it resisted our standard armoury of 3ft bolt croppers, persuader, hammer, cold chisel, screwdriver and hacksaw. The 16mm shackle was too big for the jaws of our croppers so we went after it with the persuader and hammer but after five minutes the damage was pretty cosmetic, and the lock – with a slightly bent shackle – still worked fine.

Read our review of the OnGuard Brute
Find an OnGuard dealer The Kryptonite New York is plenty tough enough to repel most criminals and is a good choice for everyday use where bike security is a necessity.

It's not cheap, and it's heavy, but the New York pointed and laughed at our standard armoury. Nothing short of some quality power tools would make a dent in this lock.

The Abus Granit X-Plus has long been among the best and most popular D locks on the market and it's not hard to see why.

We couldn't break this one with our standard thieves' armoury. The shackle is super stiff and no amount of cropping, twisting or thwacking would do any serious damage. the plastic sleeve got a bit mangled, but that was about it. Some meaty blows to the base broke off the plastic covering, but only to reveal a serious-looking steel plate construction that does a very good job of protecting the lock mechanism and was dismissive of our efforts. After all the violence was over the lock was still in perfect working order; even the plastic cover just snapped back on. In combination with a hefty chain, a good padlock will provide high-level security for home bike storage, though the substantial total weight makes it a bit impractical as carry-along theft prevention.

The Squire SS50CS is a well-designed, heavily armoured bike lock that's an excellent partner to some heavy-duty chain.

At 650g it certainly feels the part. It's engineered from a hardened steel billet with a 10mm shackle that's almost fully enclosed. The barrel is protected by another steel plate to protect against drilling, with the key turning just an eighth of a rotation to allow the protective sheet to cover more of the mechanism.

It doesn't have a rating on its own, but the Squire SS50CS Stronghold Padlock is included with lock and chain combinations rated Sold Secure Motorcycle Gold, a higher standard than Bicycle Gold. 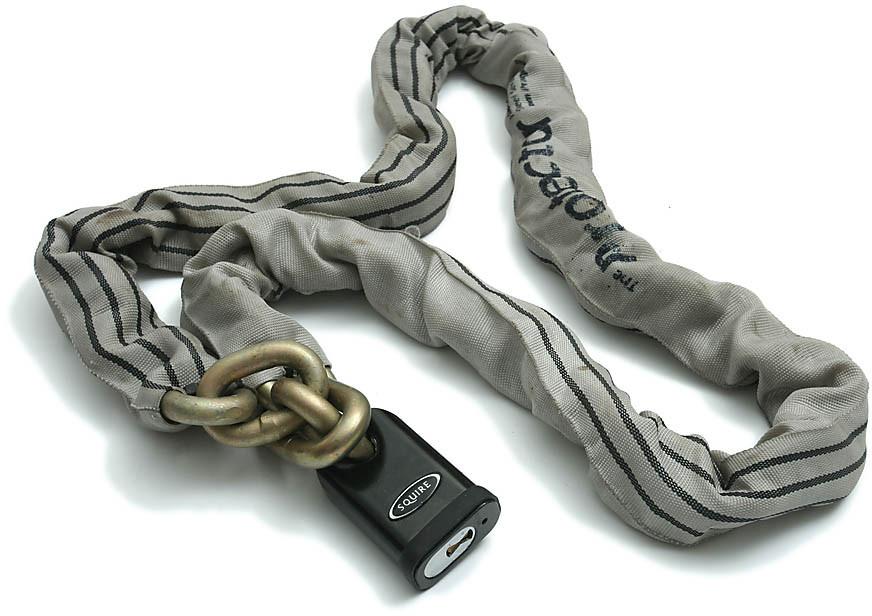 Two metres of Protector 13mm chain weighs 6.95kg so you're not going to be carrying it around, but it's a great last line of defence for your home bike storage.

We couldn't touch it with bolt croppers, and a chain is inherently resistant to prying and hammering, especially a hardened steel chain like this.

Pragmasis offers a package of a 2m Protector with the Squire SS50CS Stronghold padlock above for £133.70.

Explore the complete archive of reviews of bike locks and security devices on road.cc