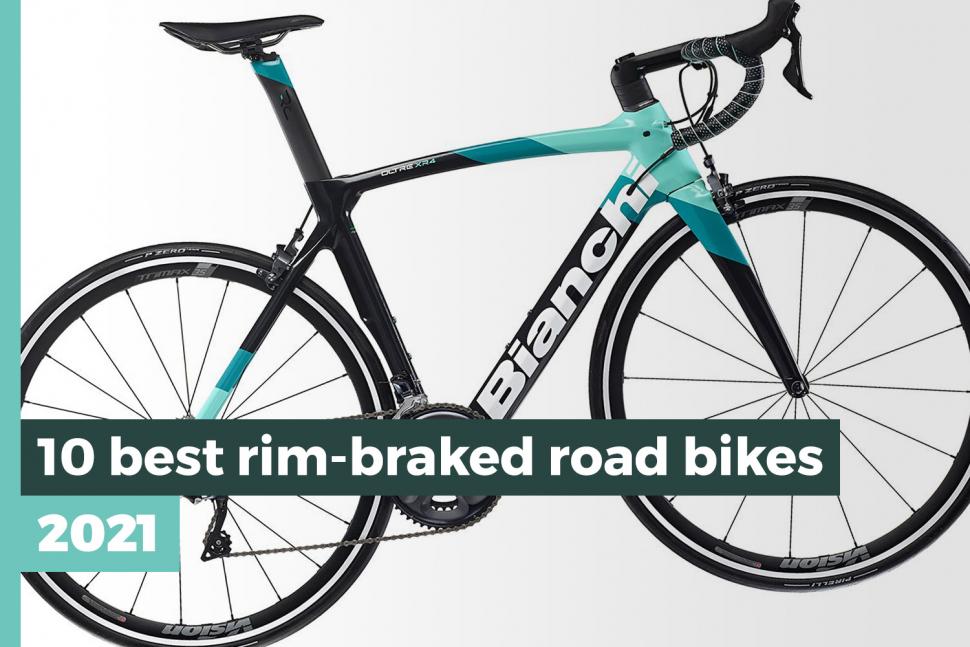 Is the rim brake dead? Definitely not, but it is clear that disc brake bikes now dominate, especially among bikes with recommended retail prices above about £1,500. Nevertheless, the best rim-braked road bikes still have a devoted following and the disc versus rim brake topic is still sets forums and social media networks ablaze with passionate supporters of each system. But what if you prefer rim brakes and are wondering what your options are for a new road bike in 2021? 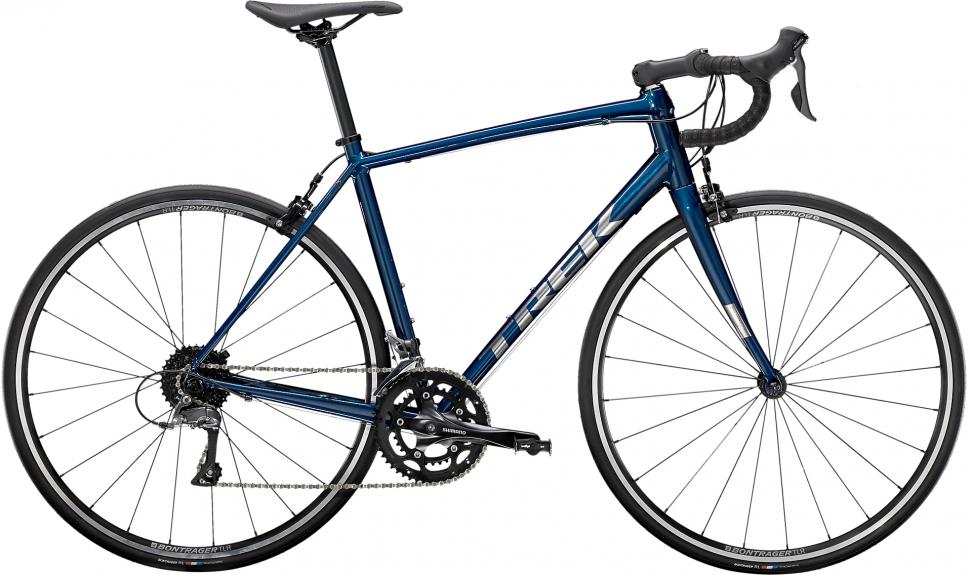 The only rim-braked offering from Trek is this entry-level version of the Domane endurance bike line. The frame is built from Trek's aluminium alloy tubing to the company's long-standing endurance geometry for a bike you can ride all day, or blatt into work on with its 28mm tyres helping ward off the effects of potholes and Britain's increasingly crummy roads. 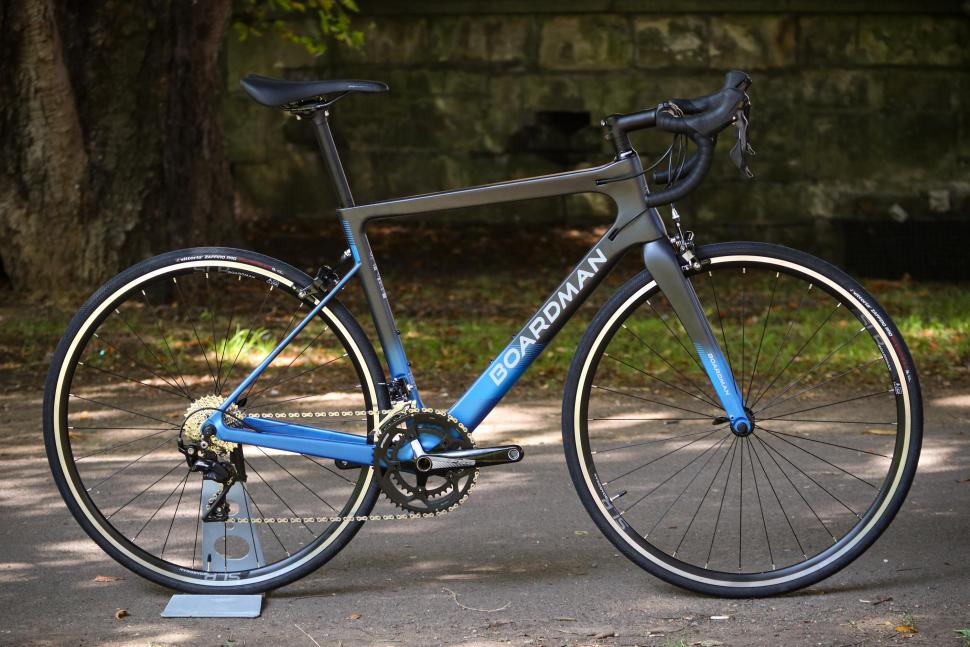 The cheapest carbon fibre-framed bike on the market uses rim brakes to help keep the cost under control, and the result is a terrific all-rounder that reviewer Stu Kerton describes as "brilliant!". Serious praise from a man who routinely gets to ride bikes costing almost ten times as much.

Read our review of the Boardman SLR 8.9 Carbon

The Giant Contend SL 1 is what we used to call a fast road bike. It's not 100 per cent racy, but it's quick and versatile in a way that makes it spot-on for club riding, audaxes, long commutes and adding the lovely swish of bike tyres to the sounds of the countryside all year round.

It has a fine balance of long-ride comfort and assured, sustainable pace and it refuses to be fazed by annoying trivialities like crummy road surfaces.

It's also a bike that hits a target with amazing precision. It's fast enough and comfortable enough for long days in the saddle chasing sportive and audax personal bests, while its ability to take mudguards, and tyre-expanding wide rims mean it'll point and laugh at bad weather and it eats potholed streetscapes for breakfast. 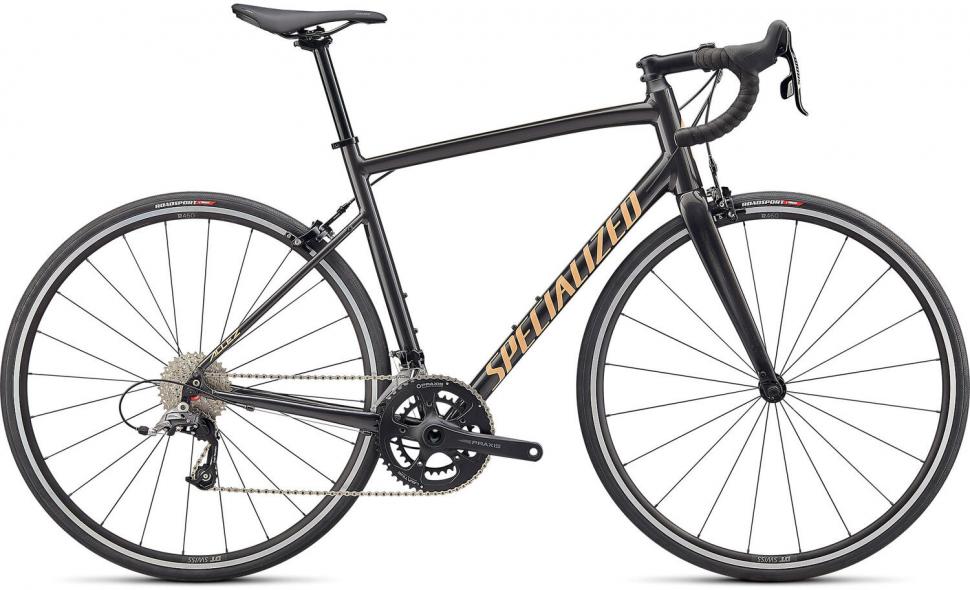 This incarnation of the Allez Elite is built around the frame that Specialized launched in 2018 which was a bit longer and taller than the previous, very racy, Allez, , improving its manners while still just about maintaining its racing aspirations. As tester Stu said of the 2018 version, for a lot of people it really is going to make a lot of sense.

"Everything feels tight under hard cornering and braking, that's for sure, and thankfully it hasn't come at the cost of comfort," Stu wrote. "The entire frame manages to take out the worst of the road buzz and I never once felt like I'd taken a battering."

This latest version foregoes the Shimano 105 you'd expect to find at this price point, probably because Shimano has been finding it hard to deliver bulk quantities thanks to the fallout of the Covid-19 pandemic, and uses SRAM Rival 22 instead. Take a look at our Rival v 105 head to head for more details. 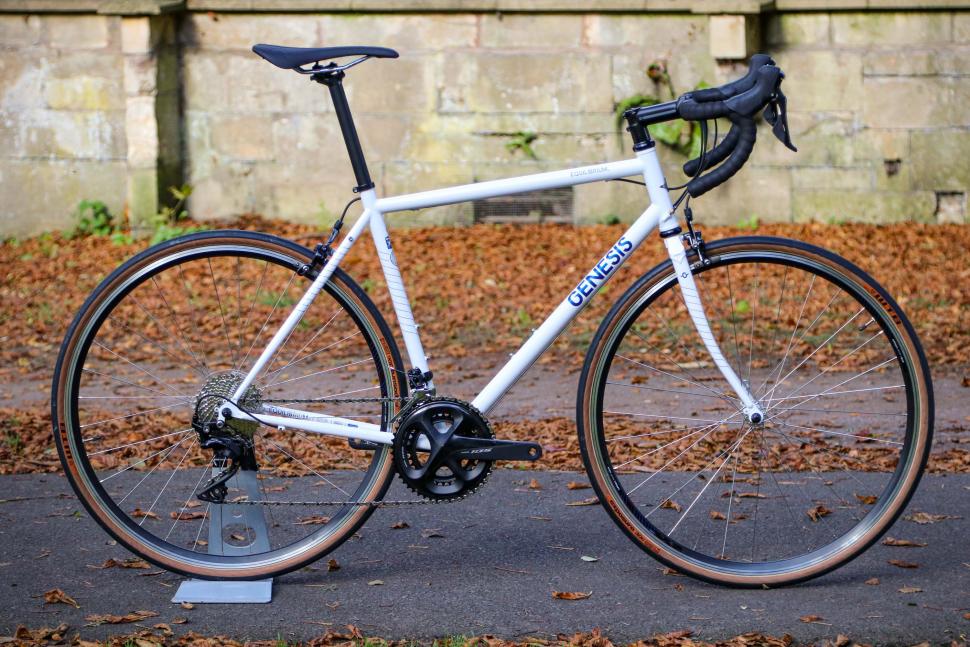 British brand Genesis has long championed the virtues of steel as a frame material, so it's fitting that their rim-braked Equilibrium should get a spot here. It's a thoroughly modern take on the classic British club bike, with tubes in Reynolds 725 chromoly steel.

"The ride quality is beautiful", says tester Stu kerton. "Taking to the back lanes sees it float across broken road surfaces. It just seems to dampen everything out and feels so composed. That means you can ride this bike for hours without feeling battered or broken. That makes a big difference on something like an audax, riding a challenging sportive, or if you're out touring."

Ironically, you might however, want to upgrade the brakes. Stu suggests swapping out the stock Promax stoppers for TRP RG957s which have the same deep drop needed to reach round the Equilibrium's 30mm tyres, but afford rather more braking confidence.

Read our review of the Genesis Equilibrium 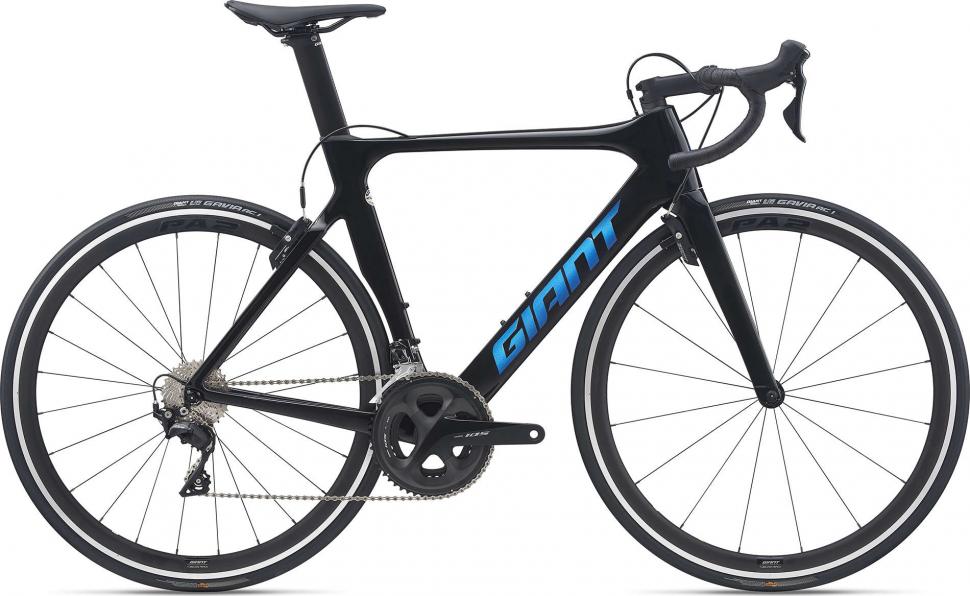 Aero bikes were one category that seemed unlikely to wholeheartedly embrace disc brakes, but there are now very few aero bikes with rim brakes, perhaps because putting the brakes down by the hubs makes it easier for designers to figure out how to get air to flow over them smoothly. Nevertheless, if you want a rim-braked aero bike you could do a whole lot worse than the Giant Propel Advanced 2.

Sports megastore chain Decathlon has always been quite conservative in bike design, and still offers several rim-braked bikes, including this Ultegra-equipped model. It's built around Decathlon's Ultra CF frame, which tester Stu says offers "excellent stiffness, handling and speed while also managing to be unbelievably comfortable.

"I was really expecting the Ultra CF 900 to be a no-nonsense speed machine, sacrificing comfort for performance, especially when you take into account those huge tube profiles. In use, though, it is completely the opposite. The ride is sublime, absorbing pretty much everything the road surface can chuck at it, so you just waft along at a very impressive pace, smashing mile after mile without effort.

If you're a rim-brake aficionado you'll be glad to see that the Van Rysel Ultra CF Ultegra has bosses for direct-mount calipers. These significantly firm up the feel of Shimano's already-excellent brakes and are very much the way to go if you can find a bike that's fitted with them. 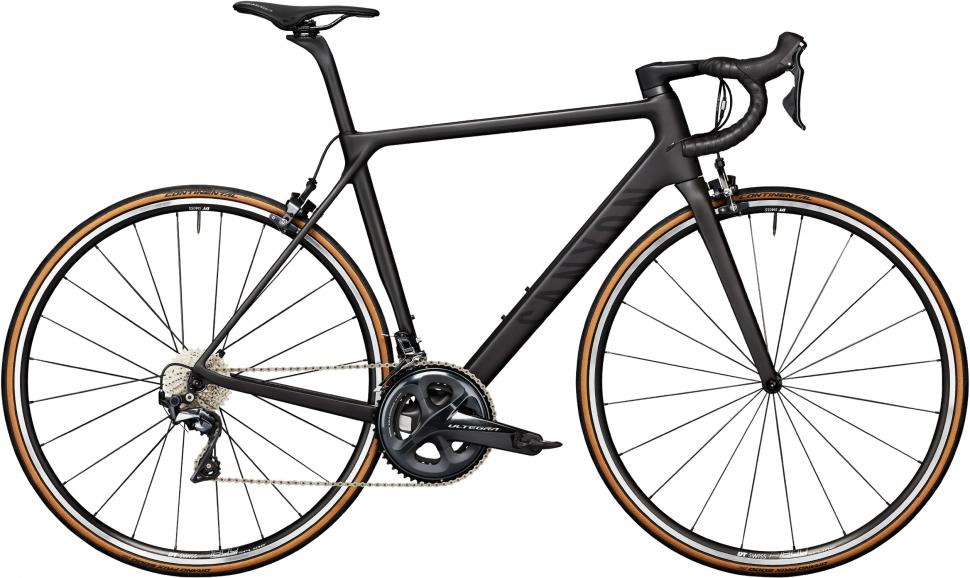 The Ultimate series is Canyon's attempt to build the lightest possible frames, within the constraints of sensible pricing of course. The Ultimate CF SL 8 weighs a claimed 7.02kg which is impressive even when you consider it doesn't come with pedals (a pair of matching Ultegra pedals will add 248g).

There's a good selection of finishing kit here too, including DT Swiss wheels with Continental GP 5000 tyres and Canyon's own CP10 Aerocockpit CF bar and stem.

Want the very latest groupset on your rim-braked bike? Ribble is as far as we know the only manufacturer who'll sell you a bike, the Endurance SL R, with Shimano's new 12-speed Dura-Ace R9250 Di2 and rim brakes.

Don't be fooled by the name, Ribble's Endurance line are bikes for fast riding, albeit with just enough edges smoothed off that they're suitable for long fast rides too.

Read our review of the Ribble Endurance SL R 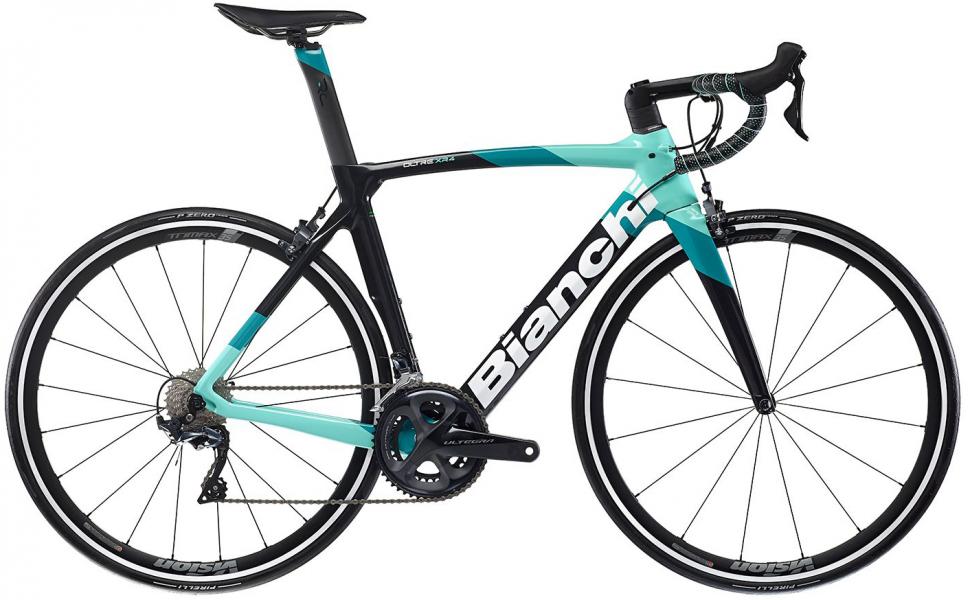 Bianchi still lists a rim-braked version of the mighty Oltre XR4 race bike, which Mat Brett described as "agile and mega-stiff with pin-sharp handling, and comfortable enough that you can thoroughly enjoy long rides rather than counting down the miles until it's time to get off." We can't tell you want it costs, because this 2022 version isn't in the shops yet.

The Oltre XR4 gets its comfort from Bianchi's Countervail technology, "a patented viscoelastic carbon material with a unique fibre architecture that cancels up to 80% of vibrations," according to Bianchi. How much difference it really makes is a matter of opinion, but overall Mat found the Oltre XR4 to be "a superb bike, picking up where its predecessors have left off. It's lightweight, reactive and very smooth, and if Bianchi's claims are to be believed, it's highly aerodynamically efficient too. If you have money in your pockets and racing on your mind, this is one of the very best."

Read our review of the Bianchi Oltre XR4

All your choices in rim-braked bikes

Up to about £1,500 many road bikes are still using rim brakes, but the more you spend the more disc brakes become an increasingly common sight. The price of disc brakes has got lower since they were first introduced in about 2013 with the high-end tech being trickled down to lower-priced groupsets. 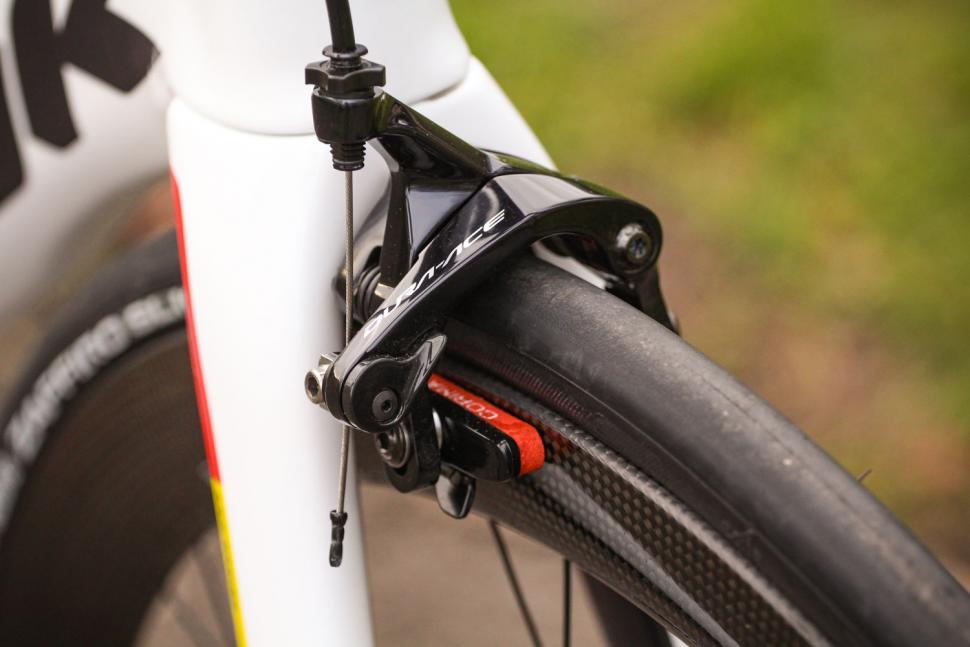 Will we eventually see rim brakes wiped out completely? A couple of years ago we'd have said probably not, but they’re already becoming quite scarce.

As far back as 2015 bike brands have been pushing their comfort-focused endurance bikes onto disc brakes. Giant was the first to develop its Defy entirely around disc brakes, and today finding an endurance bike with rim brakes is increasingly difficult. And the same is happening with the latest breed of aero road bikes, the likes of the Specalized Tarmac and Cannondale SystemSix are only offered with disc brakes.

The biggest choice of rim brakes are found on entry-level all-round road bikes, the likes of Giant’s Contend or Cannondale’s CAAD Optimo, for example.

Here's a listing of the rim-braked bikes we've been able to find from major manufacturers. Let us know in the comments who we've missed.

Read more: The stuff they never tell you about disc brakes