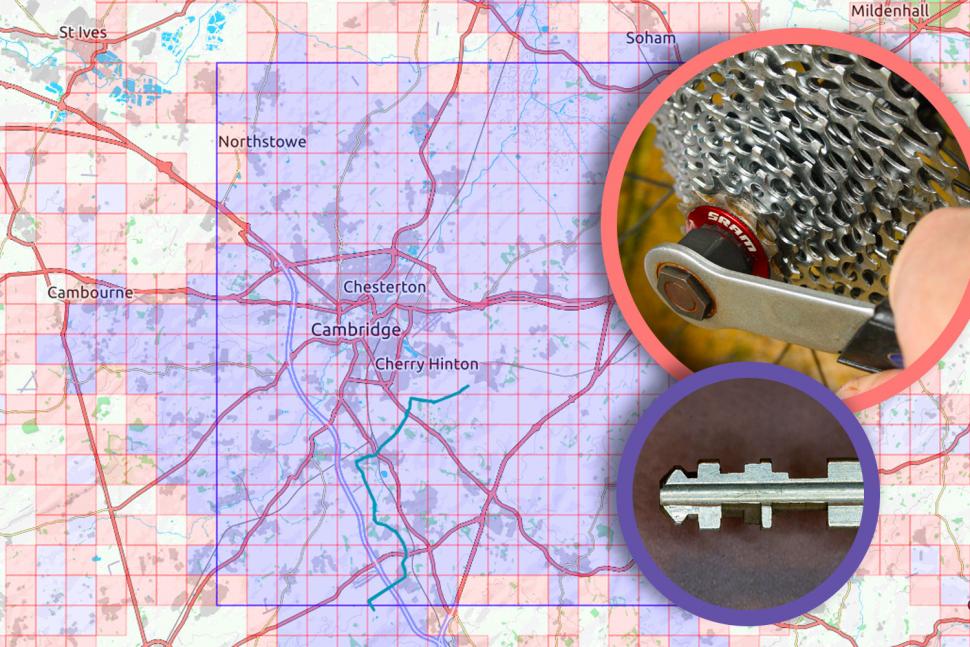 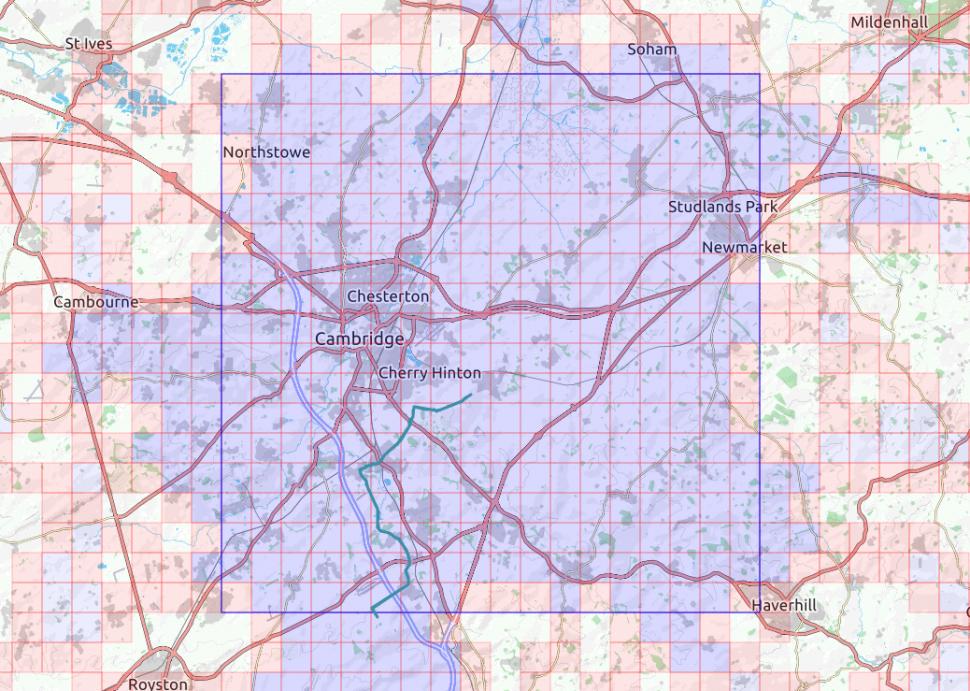 My VeloViewer square. The blue line is a recent morning ride complete with tiny final detour to get that southernmost tile

In the last couple of months I’ve turned into a tile-bagging fewl, seeking out obscure lanes, dirt roads and trails in order to increase the size of my VeloViewer square and max cluster. “WTF are you on about, Stevenson?” I hear you ask. I’ll explain.

Counting the number of map squares aka tiles you’ve ridden through is a function of nifty Strava data-visualisation site VeloViewer. VeloViewer uses OpenStreetMaps to show you where you’ve been and a tile is a square on an OSM map at zoom level 14. The size varies depending where you are in the world because Mercator projection, but in the UK a tile is roughly 1.5km on a side. Upload your rides to Strava and link your Strava account with VeloViewer and you get a nice representation of how extensively you’ve explored your local patch.

As well as being marvellously nerdy, this is a great excuse to go out an explore. I’ve found tiny lanes and just-about-ridable dirt roads that I’d probably never have explored without the incentive of bagging a particular tile. I’ve also slogged along dubious muddy trails, had to clamber over stiles and sneak up the odd obscure farm track to get to the tiles I wanted to reach. I’ve yet to encounter a cry of ‘Get orf moi land!’ but I’m hoping when I do the explanation of why I’m there will convince the farmer that I’m a harmless lunatic best allowed to go on his way.

To import all your Strava activities into VeloViewer you need the Pro version, which costs ten quid a year, but you can get a flavour of how it works with the free version. There’s a VeloViewer browser extension that overlays your bagged and unbagged tiles on Strava’s route-planner so you can look at a tiny road into an unbagged tile, think “I wonder if that’s actually rideable” and then go and find out.

VeloViewer users have racked up some properly amazing achievements on their way to riding huge squares and max clusters. The UK leader, Londoner Jonathan France, has covered a 101-by-101 tile square that covers most of the south-east of England and beyond, though further expansion seems to have been stymied by the Thames estuary and patches of military land. Even so, only Jürgen Knupe of Dachau Germany has covered a bigger square than Jonathan with a zone that’s an amazing 106 tiles on a side and still growing.

The website rideeverytile has more, including national leaderboards and discussion of 'impossible' tiles.

Abus lock codes and key-alike — did everyone know this? It’s a tenet of cycling’s received wisdom: if you want your bike to be as safe as it can be when it’s parked on the street you lock it with an Abus Granit X-Plus D-lock. In the process of getting a couple of new locks, I found out that Abus have a couple more tricks up their sleeves aside from the Granit X-Plus’s resistance to a wide range of attacks.

When you order more than one X-Plus lock, you can get them keyed alike. In fact, even if you’re just ordering one, you can get its key made to be compatible with the lock you already own. If you’re a multi-bike, multi-lock household, this is very handy: no more trying to keep rack of which key fits which lock.

But what if you’ve lost the card with the key’s code number or have several locks and several key codes but don’t know which is which? Turns out, the clever folks at Abus have you covered there too. Abus’s bloke in the UK, Roger Seal, explained to me that the numbers in the code correspond to the angle of the cut on the key: “6 is flat i.e. no cut/same as key shaft. 1 is 90° cut to key shaft. 2-5 are the angles in between.”

That means if you send Abus a nice clear photo of your key, they can figure out the code number and supply a replacement, though it’s better to send the actual key — but either way having lost the code card isn’t a blocker on getting a spare or replacement key.

Is your cassette lockring tight enough? 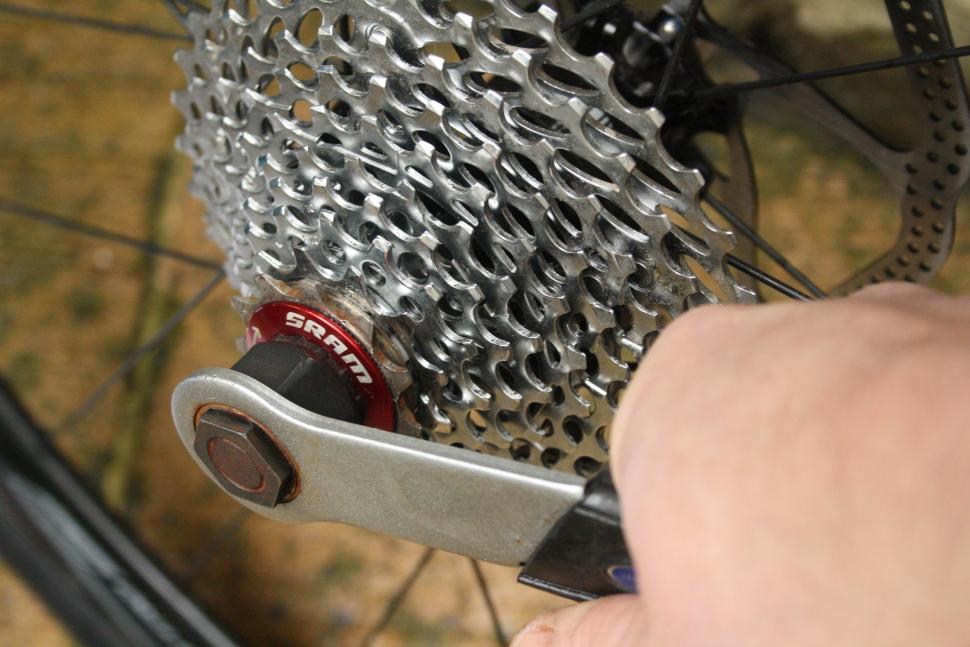 I’ve always thought that the recommended torque for cassette lockrings (up to 50 Nm depending on the manufacturer) was a bit excessive. After all, surely all you need to do is keep the sprockets in place and that doesn’t need anywhere near that much oomph.

Not so, according to wheelbuilder Malcolm Borg at the Cycle Clinic, whose blog post on the topic I happened to stumble across while looking for something else, like you do. The ‘excess’ torque preloads the sprockets so they are less likely to move and dig notches into your aluminium freehub body.

On his blog, Malcolm writes: “Most of my wheels have aluminium alloy freehub bodies. Some people worry about cassette sprocket notching. This concern is misplaced. Notching occurs for very specific and avoidable reasons.

“Notching can only occur if the cassette lockring does not provide enough preload to the cassette. The preload stops the sprocket slipping and notching the freehub.”

Malcolm also mentions that it’s not about how powerful a rider you are either. “Regardless of how strong you think you are you can't notch a freehub that has a properly installed lockring.” So there.

Further on in the posting, Malcolm comes across as a bit sceptical about the use of torque wrenches, which I think is misplaced. Yes, very skilled and experienced mechanics may develop a “feel” for how tight things need to be, but for the rest of us a torque wrench is invaluable both to prevent us over-tightening things, and to make sure we get things like cassette lockrings tight enough. A fiver says that if you asked 10 random riders to tighten a lockring to 50Nm by feel no more than two of them would get it anywhere near tight enough.

I see we’ve had another skirmish in the endless war between people who think cycling is an activity so unusually dangerous that it requires head protection and those who, well, don’t think that. Against my better judgement I may have gotten a bit involved, and then, as usual, got fed up with it. But I can never resist this comment from Jim Moss, a member of the US ASTM committee on helmet standards.

One of these days I’ll get round to writing a long and extremely tedious piece about why I don’t wear a helmet except to deflect low-level branches when I’m mountain biking, but Jim’s revelation about the standards is a big part of it.