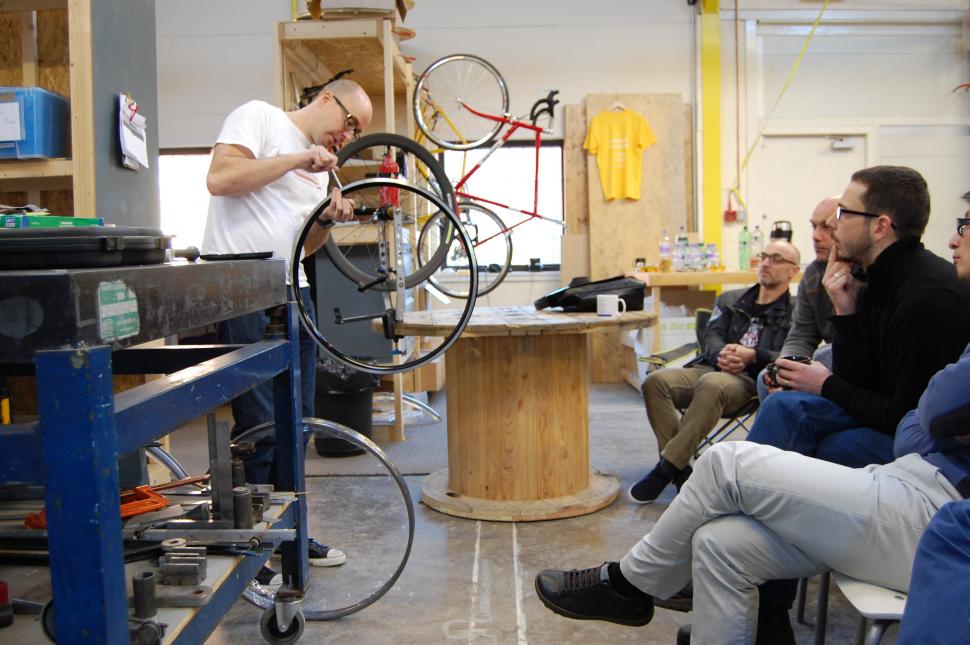 Last year, I built some wheels.  It took me ages and the rear wheel dishing was off but I built them, and rode them, and I was proud of them.  But they weren't right.

For the previous two winters, I'd ridden factory-built wheels and after 3,000 or so wintery miles they were junk.  One set had wafter-thin pad-eaten rims, whilst the other set ended up with cracked eyelets.  I was disillusioned, buying a set of wheels each year to chuck away before the following winter.  My complaints to other cyclists were unanimously met with “you should get some hand builts”.  Being a bit thirsty for knowledge, I decided to have a crack at it myself so I obtained the relevant parts (hubs, rims, spokes, nipples), borrowed the bike club wheel jig, got some e-books off the internet, talked to a few people then set about lacing them up.

It took ages, I made mistakes, I corrected mistakes, it infuriated me, but I quite liked it and ended up with a nice set of wheels that I rode through the winter.  Foolishly I whacked in some cheap brake pads at some point, and during one wintry ride, they got stones stuck in them and ground down the rims, so this year a replacement set of rims was obtained and I started rebuilding them.  I'd got a dish tool so I was determined to correct previous mistakes and have them running spot on.  Unfortunately, time pressures of work, parenthood and everything else that constitutes a 21st Century life meant that I was trying to do it late at night in a cold shed... cue two wheels that looked like Pringles.

Luckily for me, a friendly tweet by a fellow twitter user (thanks @euancx) alerted me to a course being run by Derek McLay of Wheelsmith.co.uk, An Introduction to Wheelbuilding.  It was being run in conjunction with Shand Cycles over at their workshop in Livingston, and at the bargain price of £20 for the day it was right up my street!  My lovely wife was alerted to the details of the course and the next day she surprised me by booking me a place.

Derek took us through the various components that constitute a wheel, letting us look and feel them as constituent parts, seeing how they may feel flimsy, how they bend, or in the case of a hub, how heavy it is.  Choosing parts to work together isn't quite as simple as it seems, spoke lengths are a mystery, they rely on so many variable factors that it can sometimes catch out the professionals, especially when dealing with certain rims where the ERD (effective rim diameter) varies!  It was interesting to understand the reasons he selects components for his builds.  Again, it varies, but the first principle is that you want something that is reliable. 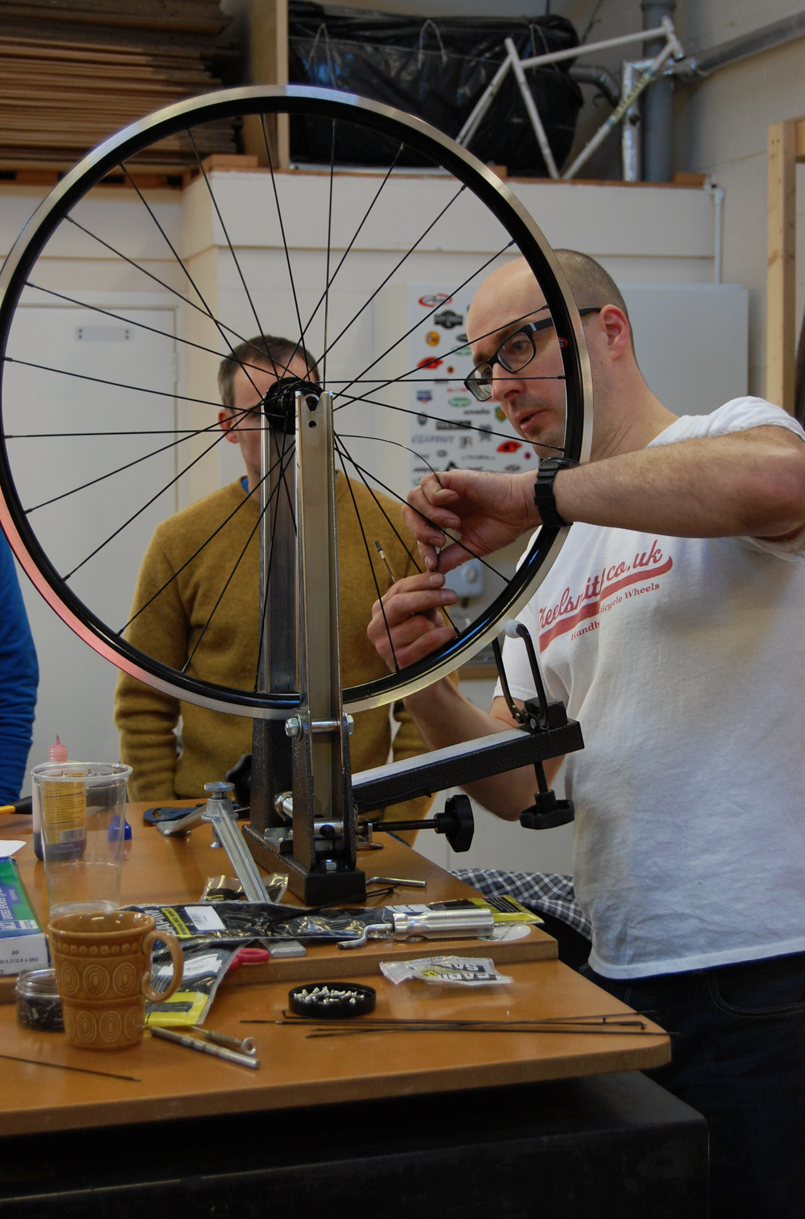 Derek then laced up a wheel, showing us what he considers to be the most straight forward lacing pattern with the greatest chance of success.  It busted some of the myth around wheel lacing that had caught me out when I'd attempted it myself.  The most interesting bit (for me) was yet to come: how to dish a wheel.  I learned from the course that our club wheel jig, although good, is out of tune so the self-dishing doesn't work at the moment and the rear wheels I knocked together were both out of dish by 5mm.  Turns out... I'd been tweaking the wrong nipples; I should've been tightening the non drive side spokes instead of the drive side!  It seems so simple, but at 10.30pm in a darkened shed, it all went terribly wrong for me.  At least I now know what I need to do next time.

By the end of the day, Derek had laced wheels, tensioned them, shown us how to do some of the things he did and told us (though not exhaustively) not what to do.  The course itself was exactly what it said on the tin, an introduction.  It wasn't an exhaustive tuition course, which left the attendees able to build wheels like they'd been doing it their whole lives, but it familiarised us all with how wheels are built by hand and the work that goes in to selecting components, assembling, truing, dishing and tensioning.  If you're into that sort of thing, then there may well be more courses in the future, so keep your eyes on the Wheelsmith website and twitter account.

For someone like me, it was a great experience, it allowed me to ask the questions I wanted to ask, it allowed me to understand some of the jargon I'd read in various books about wheel-building, but most of all, after having just about buggered up some wheels fairly recently, it gave me the will to have another go at wheelbuilding!  It will have given the folk attending different degrees of clarity and understanding, but Derek is happy if it gives someone the confidence to pick up a spoke key and true up that wheel they have that is kicking the brake pads. 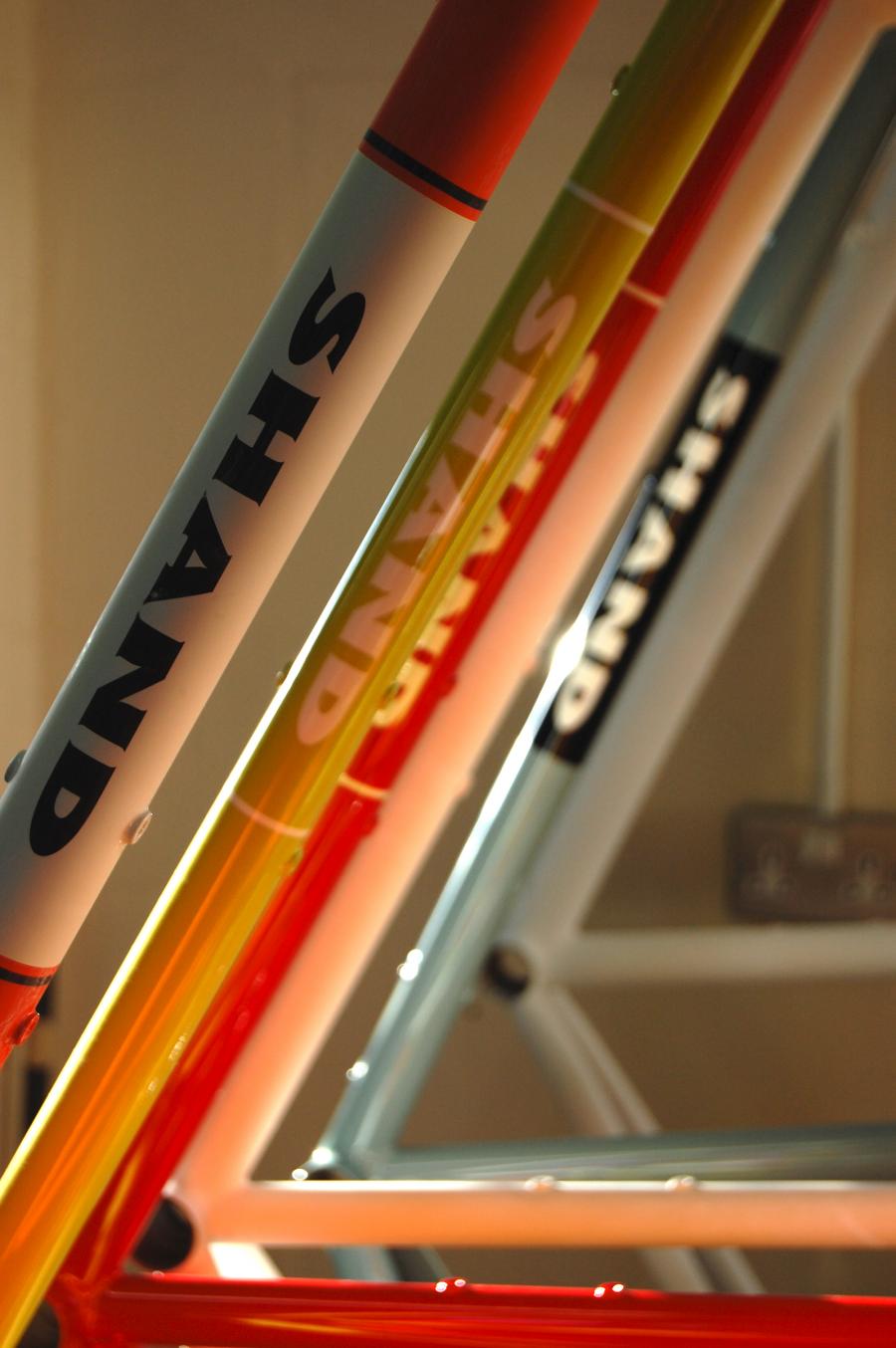 The other benefit of the course was that it was held at Shand Cycles.  If you're not aware of Steven Shand, then you should be.  His workshop produces beautiful steel bikes, I'd previously seen fully built bikes, but never had a chance to look at them up close, now that I have, I'm even more impressed.  The workshop is tidy and modern, none of the lumps of wood and antique kit that might spring to mind when you think of handmade steel frames, it's relaxed and has a good feel about the place.  It might not be like that mid-week when orders are being built, but it was fascinating to see how bespoke manufacturing is approached by Steven and his team.  Thanks to Derek and Steven for chatting about their approach to their specialities; they're both enthusiastic about their products, it's infectious to hear them talk and to see what they do.

As for me, a Shand with Wheelsmith handbuilt wheels has been added to the (ever-expanding) wishlist! 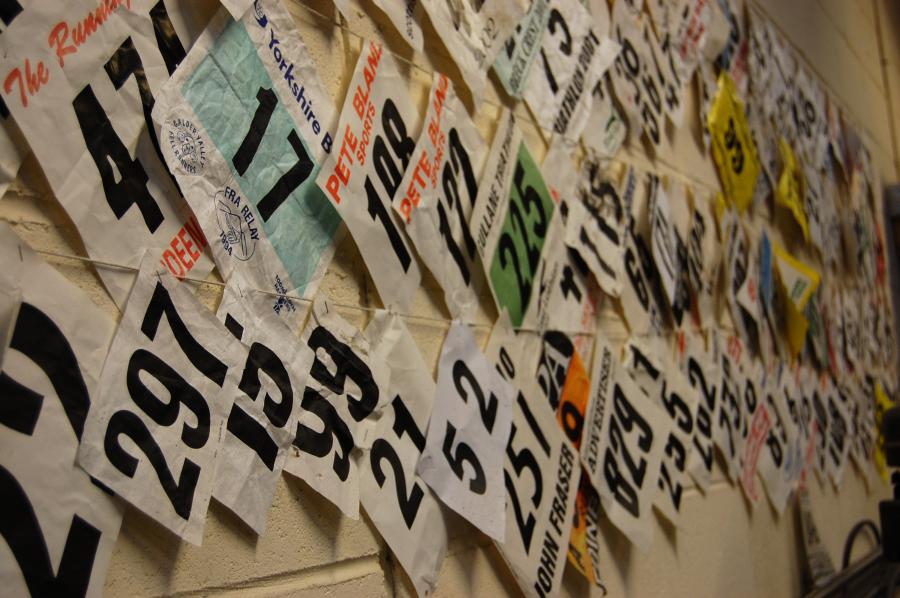