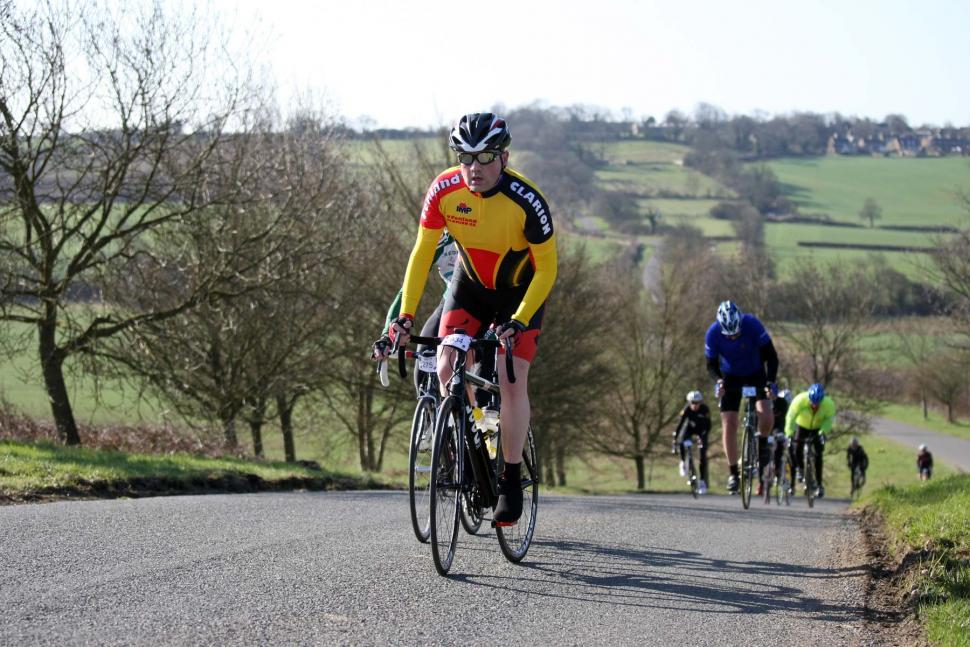 Jimmy has had some special and terrible moments this year. It's certainly never dull...

How was it for you?

2013 was a year I will remember for a whole host of reasons.

It started with some optimism about my racing aims which were checked with a poor performance in my clubs traditional “new years day” 10.

My time was in the 28’s and was comparable with previous years but I felt like I had trained harder and dug deeper over the winter, retaining enthusiasm where before I would have sought refuge under the duvet.

Being a parent of a young child time with the family always takes priority but I still felt I could do some decent rides in 10 mile time trials (other distances being out of the realms of my training, which was 1 hr Sat, 2 hr Sun and 1 hr Weds evenings).
I use the early part of the spring for sportives to get outdoors, apply a bit more pressure to the pedals and have a bit of competition.

The Wiggle “No Excuses” based at Huntingdon race course was a season debut to forget. Our first club time trial was cancelled on logistical grounds, the second snowed off, so here I was lining up very undercooked.

The event was marred by heavy rain and gale force winds which meant everyone was routed on the shorter distance of 60km.

I felt ok into the wind and passed groups of people. As the rain got through my layers and I turned back for Grafham Water I did run out of steam before finding a little burst back to the finish. It was a horrific day of weather and I was so cold I changed in my car instead of trying to get back across a boggy field to the changing rooms.

The weather picked up for the Discover Rutland CiCLE Tour, an event regular readers of this column will know I have only ever missed for my wedding day.

This time the route had changed giving long steep climbs within the first 8 kilometres  as opposed to the previous flattish first 20 odd. I was going well riding in a group looking forward to the big climb at Launde Abbey and on to Belton-in-Rutland when the hiss of a puncture took the edge of a sunny morning.

Disaster struck as my replacement tube wouldn’t inflate and one bought from another competitor had a dodgy valve. Fifty minutes later I had enough and took a lift back to the headquarters.

The season was shaping up badly with two events off a shortened one and a dnf.
I did ok in the first couple of midweek club 10’s even dipping into the 25mins before the real meat of the season. This helped my confidence although  the first open I rode brought me back down to earth with a long 26. I couldn’t fathom why I was so inconsistent and was beginning to stress that the plan I had laid down for the season was in tatters.

Then came the Peterborough CC Open 10 and my date with Michael Hutchinson. I had joked with my wife that he would be my minute man and that he would embarrass me. As it happened I had two to play with!

It was a really hard ride despite having the wind to the turn and to make nearly 7 kms (and past my family) whilst keeping him behind was a high point.

When the overtaking manoeuvre came, Hutch was efficient. I was doing nearly 50kph and 168bpm but he passed like a rocket before taking another three minutes out of me in the run for home.

At the finish he wasn’t overly enamoured with a long 19, I was absolutely cock-a-hoop with a short 25.

I felt like this would be the high watermark of my season but the improvements kept coming midweek and even on a more sporting ten course than the local ‘open event’ one I match and then beat my time.

Then came the fateful morning when before packing the car and heading to Dover for holiday I chose to take a 25km spin in the fens to keep my legs loose for the long drive to Brittany.

I remember nothing of that day other than waking up on the roadside before being stretchered away, loaded into an ambulance and being take to A&E for multiple x-rays and brain scans...

...After a month letting scars and bruises heal I was really tentative when setting out on my bike. Especially as the cause of my accident wasn’t clear. The Garmin and heart rate data seemed to indicate that I wasn’t at fault in a medical sense which made me feel better.

My first ten back after weeks helping and watching helplessly was back in the 26s but the final couple of events saw me back down into the short 25’s before a second break and a decision to let my wounds properly heal before racing on. These rides are amongst the proudest moments I have had on a bicycle. It took a lot both mentally and physically to get those rides out of me and whilst I know I am no great shakes as a cyclist, I learnt a lot about myself those few  weeks.

My life changes again early next year with the arrival of a second child. So I will do well to be part of the local scene too much, but I will grab the moments on my bike that I can and still strive to make the most that I can of the tools I have been given.