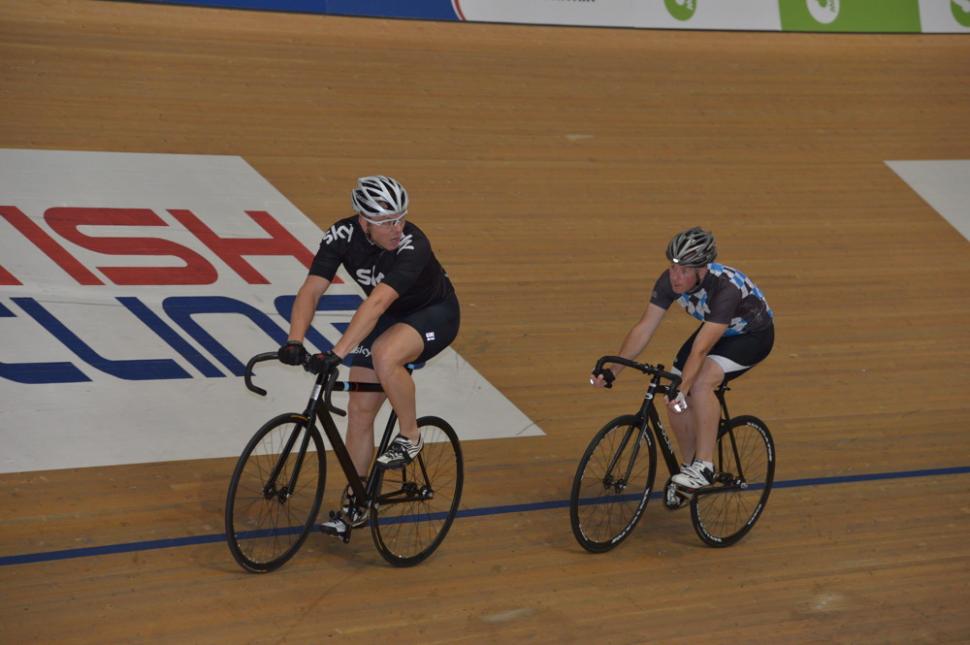 When someone emails you to say “do you fancy going to the velodrome in Glasgow to ride the track with Chris Hoy?”, there’s only ever going to be one answer, isn’t there?

Nerves
Opportunities to ride on the track with one of Britain’s greatest Olympians, don’t present themselves that often, my cycling-friendly boss immediately agreed, on the condition that I didn’t brag about it...  that would prove to be the toughest part of the whole experience!  When we arrive, we get taken down into the velodrome to get our hire bikes, I’ve never been in a velodrome, I’m nervous, it’s completely alien to me.  I’ve ridden single speed, but never fixed, am I going to end up trying to ride a bucking track bike as I forget to pedal and try to free-wheel?  Am I going to leave the track on a stretcher with a 20cm splinter in my calf like Azizulhasni Awang at the 2011 World Cup?  Am I just going to face-plant and look a bit of a pillock?  Perhaps a combo of all of the above?

“Ode to Sir Chris”
Going into the velodrome is awe inspiring, the bike hire is located so you look up at the banking from a floor below… it’s inconceivable that anyone could ride that angle!  Hire bikes in our possession, we wait for Chris to arrive, I spot Jimmy McCallum, getting changed after a track session, for the first time today, I’m star struck.  We continue chatting amongst ourselves, cue second star strike - I'm now talking to former pro rider Simon Richardson, who now works as Sports Marketing Manager for Science in Sport. 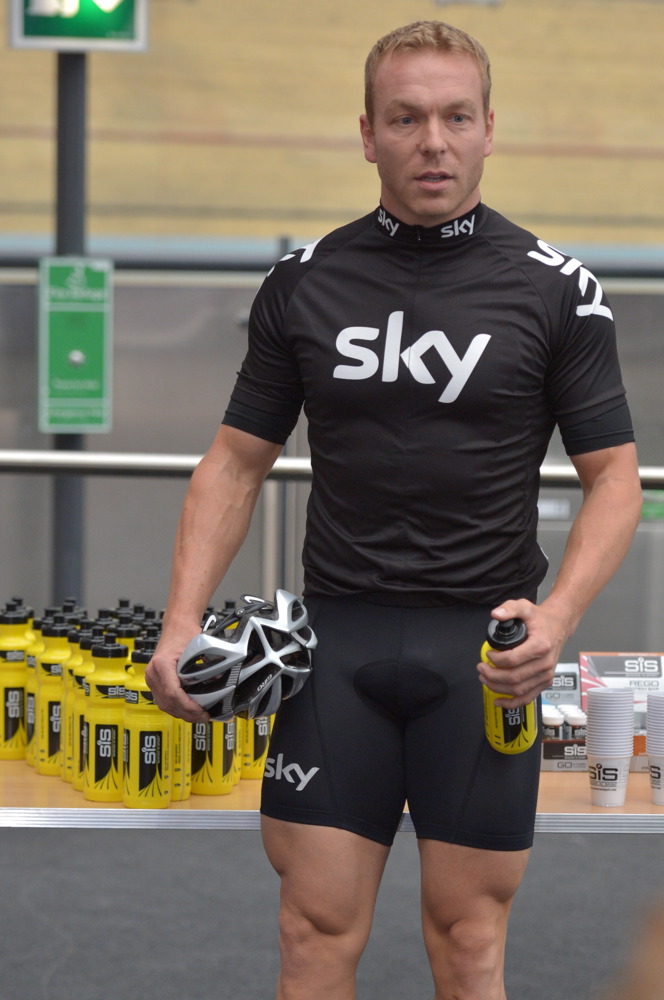 And then we spot him across the other side of the track.  It’s hard to believe this is a guy who’s devoted so much of his life, of himself to being the absolute best in the world at what he does.  He’s a big chap, not big as in “fried breakfast every day” big, but he’s a man of stature.  The thing you notice first is how much the man smiles and how much class he exudes.  This is starting to sound like a bit of an “Ode to Sir Chris”, but this experience is not a common occurrence.

Watt the…?
The order of the day is set; first for our group is a Wattbike session, my heart sinks, static cycling has never been top on my list of fun things to do, but my mind is soon changed once we start the session and work through the Wattbike British Cycling warm up.  This is actually fun!  Fun in the sense of trying to pedal smoothly, keep to the correct cadence, figuring out what the peanut shape on the screen in front of me is all about.  By the end of it, I’m sweating and can feel that I’ve gone a nice shade of beetroot, the cold that I’m suffering from, the one that wasn’t going to stop me from attending this event, is starting to call my bluff. 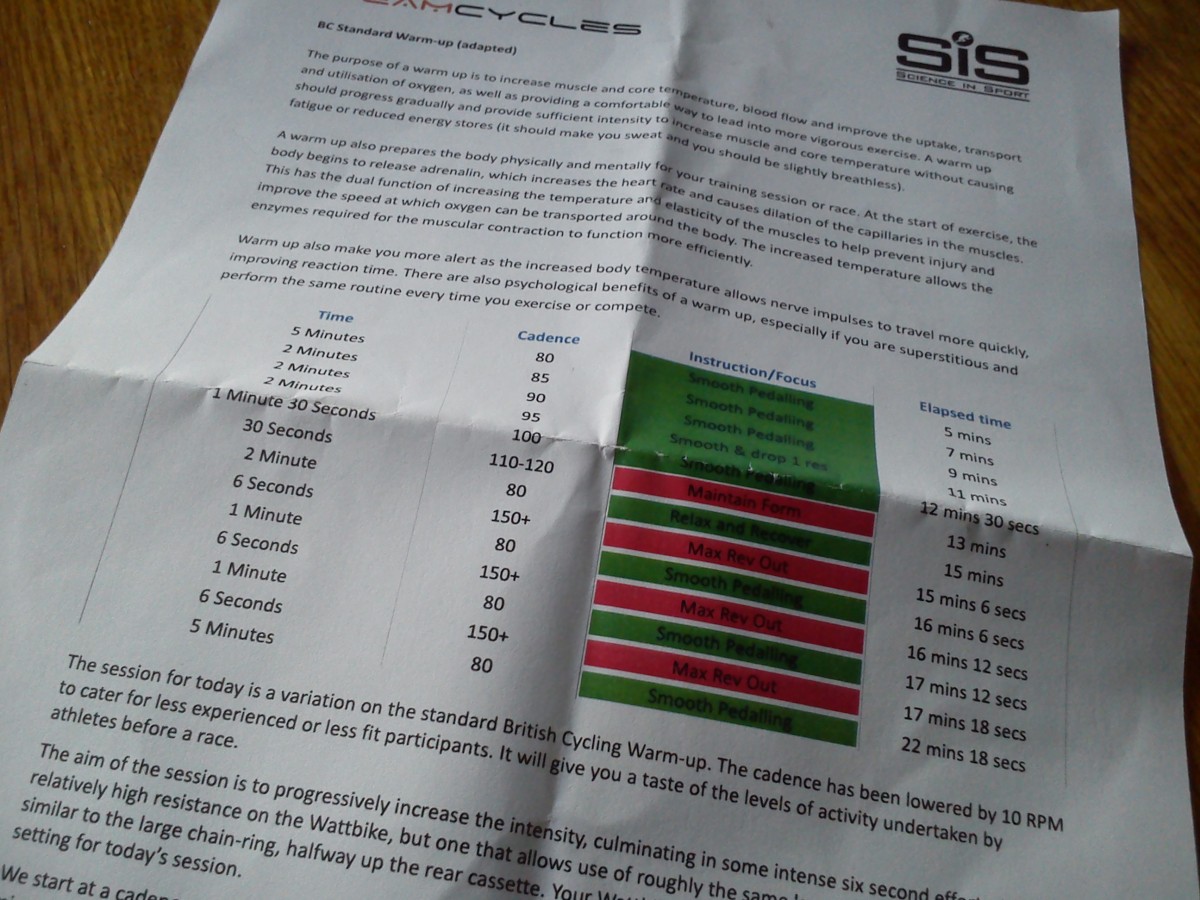 Tracktime
After the Wattbike, we grabbed the track bikes and headed to the track.  This was it, I was about to ride the track… majestically swooping from the top of the highest point of the banking (after having done a 3 minute track stand) and sprint for the line like a pro.  Ok, here’s what actually happened: I rode round the infield, wobbling along, too unsure of my ability to get onto the Côte d'Azur.  It wasn’t the sensation I’d expected.  Then something interesting happened, we lined up behind Sir Chris and sat on his wheel whilst he steadily crept up the banking until we were up on the straights, down on the corners, then it was time to creep up the corners… surprisingly, we didn’t start falling like pensioners on ice and managed to keep rubber in contact with Siberian Pine. I was led out by Sir Chris Hoy
The feeling of sitting a few inches off the back wheel of Chris Hoy’s prototype Fiorenzuola track bike was surreal, like a videogame where you’re sat behind the viewpoint of the 1st person.  Chris said he’d let me know when I should launch myself off his wheel so I hit the start of the lap at the highest possible speed, I dropped down off his wheel and put in an effort, it was fairly mediocre, I could hear my wheezing and puffing as I crossed the line with a fairly terrible 17.81 second flying lap.  As usual, the thoughts of “I could do better than that” started to enter my head, but another go (without the lead-out by Sir Chris) was a tenth off my first attempt. (Remember the excuse from the Wattbike chapter? Yeah, my cold had a lot to answer for!) One-on-one
The much more pleasurable experience of riding side-by-side with Chris was next, this was the opportunity for which Science in Sport, had invited us to velodrome.  Sir Chris Hoy is an ambassador for Science in Sport , with a focus on asking Chris on nutrition via the Ask Hoy website and SiS twitter account.  The conversation started with Chris asking where I was from and what sort of riding I did, genuine interest followed when I mentioned my membership to Stirling Bike Club; Chris’ view was that being in a club was a great way into competitive cycling, learning the basics of safe group riding, how to follow wheels, how to spot moves and to respect other riders.  It was clear that cycling isn’t a job, it’s not something he’s finished with, it’s still his passion, he can’t hide it, it’s evident as soon as he starts talking about two wheels. 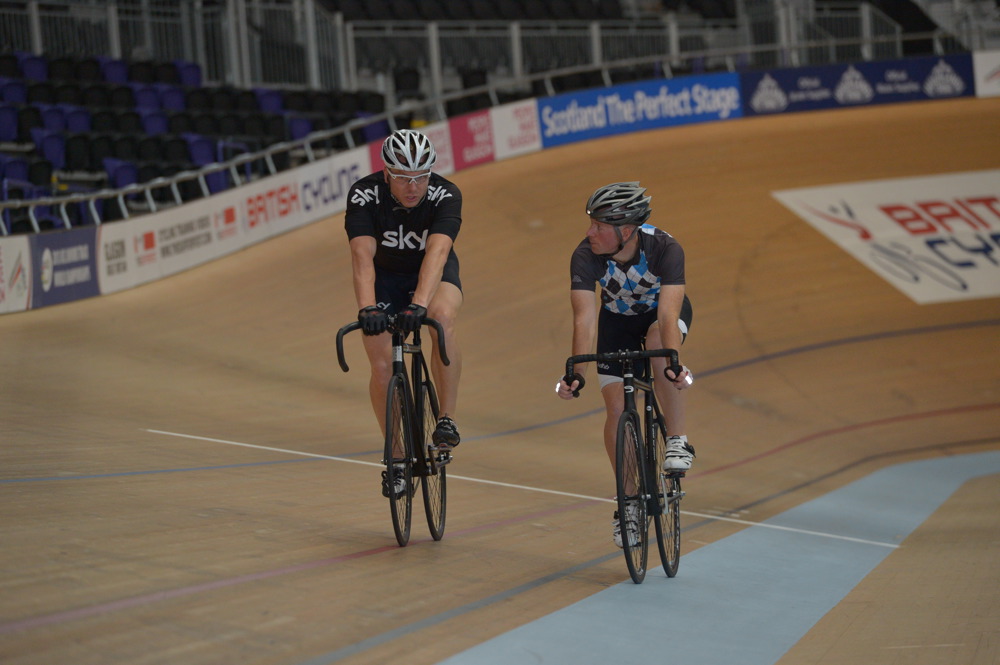 Legacy
The discussion turns to the Commonwealth games and legacy.  Grass roots cycling is Sir Chris’ passion, it’s here that he talks freely about getting people on bikes, he wants everyone to have the same experience and thrill of being on two wheels that he gets.  Ok, the old lady cycling to the shops isn’t likely to win a keirin final, but she can get somewhere under her own steam, relying solely on her own efforts to get her there.

Talent spotting
My club has some promising junior riders; guys like myself are never going to achieve much, but the youth is where it’s at.  You can see the kids are so hungry; they compete all year round in most disciplines.  They’re the future.  Chris say’s it’s much easier to see these young riders coming through compared to when he started riding, citing that Chris Boardman and Peter Keen really started the ethos of competition in Britain, instilling that belief that Brits could compete on the world stage.  Kids now have access to great facilities and funding, the competitions are keenly contested and the progression through the racing system is clear.

Talking bikes
Hoy bikes are Chris’ latest ventures with Evans Cycles to provide “a great range of well designed, affordable, quality products that had a community of enthusiasts behind it.“  Talking about design is something that interests me; the bikes in the Hoy range are built around proven principles, compare this to another Scot, Graeme Obree, who pushed all conceivable boundaries with his “Old Faithful”, and more recently “Beastie” bikes; I ask Chris if he thinks much technological development is likely to happen with the sprint track bike – the answer is that they haven’t changed much since their inception, they’re still a diamond shaped frame, with a fixed gear, two wheels and drop bars.  Most improvements have been in the ability to make materials lighter and stronger, and most recently with narrower bars to try and reduce disruption of airflow around the riders forearms. 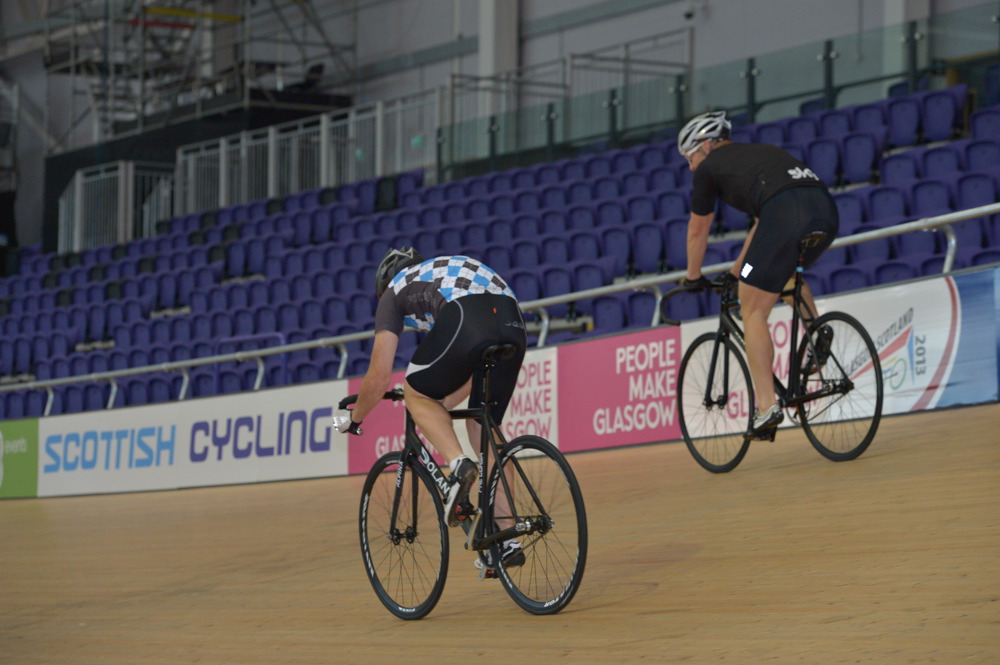 Passion
Our conversation finishes with Chris asking me how I found the flying lap, saying that I looked better on my second attempt than my first; it seems bizarre that he was watching, but then again, you go back to that concept of cycling as a passion and it’s not too hard to understand why he was taking an interest in us all.  I ask him if his physiology has changed since finishing racing, he goes back to the point he made previously about getting people cycling and lifestyle.  He rides because it’s something he wants to do, not because it is, or was, his job.  Cycling is something he believes in and it’s easy to be convinced.  Sir Chris Hoy has 6 gold Olympic medals to his name, but I get the impression that as an ambassador for cycling, his best is yet to come.