It’s important to get up early at Eurobike, not just because there’s a whole truckload of work to be done, but also to get a good clean run at the showers. After looking at bikes and crashing manufacturer’s parties the next most important thing about Eurobike are the infamous showers. There are not that many communal showers to cater for a really rather large campsite population and if you get your timings wrong you’re in for a long queue or cold water so have to go early, or smell until teatime and scrub up then. But it’s not just the queuing that gives them legendary status, these Continentals have a relaxed ease with their bodies that can sometimes traumatize a prim and repressed Englishman and opening the shower door to be faced with a phalanx of naked bodies can cause a bit of a decorum distress. Seeing a rotund, hairy and most probably tattooed German toweling himself vigorously with that particular flossing motion is never a good start to the day. You may get a little desensitized but you never really get totally used to it. Awkward damp fleshy body proximity over with, walk to the Messe, straight to the Press Room, computer on, get coffee and croissant, bash words out, sort hundreds of photos. Coffee, ham and cheese roll, words, apple juice, photos, coffee, repeat. Head out into the fray of exhibition stands to do meetings and browse yet more bike trickery and tat. Grow tired feet, develop thousand yard stare, get annoyed at people that stop in doorways and stand gormless in the way when you’re clearly trying to take a photo, cling onto the promise of a free beer to get you through the day.

Today we’re starting extracurricular activities at the 3T stand, Italian brands are always the best for this kind of thing, they do the food and wine thing incredibly well, as you’d expect. We justify this cheeky blag because we need some sustenance for a bit of much needed cycling as David and I are heading out on the Rapha Ride. Each evening at about 6pm Rapha organize a mass ride out with a nice feed at the end, David did it last night and had such a nice time he wants to do it again, but mainly just for the food. It’s good.

We lycra up and sprint to the Rapha bus, last night’s ride started about an hour late, as is the way of a ride with about 80 people faffing about, so we’re hoping our 20 minutes tardiness will be okay, but we’ve missed the ride by five minutes. We’ll catch them up. We get a bit lost heading out of the exhibition complex but we’re finally onto country roads hunting down a stylish peloton, after a while and a few wrong turns we realize we’re never going to catch them so kick back and just enjoy the ride. No map, no GPS, no computers, no agenda, no idea where we’re going, just meandering where the mood takes us. 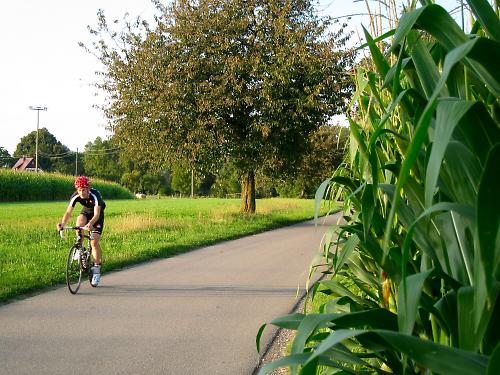 The sun is perfect light low in the sky and shows this bit of Germany to be a really beautiful place that deserves more credit and fondness, the place does suffer something of an image problem. We ride alongside apple and plum orchards, tall poles of hops and impossibly perfect green fields, each with its own cat in. The verges are tidy, empty of Lucozade bottles, Costa cups and McDonalds fries boxes, there are no lay-bys dumped with discarded household detritus, alles in ordnung. It’s lovely. After a day stuck inside breathing stale air it’s a tonic to feel fresh wind in the face and have the legs spinning circles, even if they do so reluctantly from too much walking. We beat the dark and head back to Rapha to abuse their hospitality and then get a taxi into Friedrichshafen to the Charge Party.

This event has become a bit of a Eurobike institution over the last few years, Charge bikes give good party. There’s a schwag bag of bits and the required amounts of beer to keep industry types entertained, they even bring over some Bath Ale if you’re feeling homesick, it’s the one place everyone goes to meet everyone else and talk about Not Bikes. Beer is had, and ice-creams, there is chatting with old friends and networking with new ones, it gets late. The stories of our camper-van plight have got around and those kind people at Saddleback (distributors of nice bike bits in the UK) have offered us the use of a two-bed apartment in town that’s surplus to their requirements. We bite their hands off, and Mat and I win the prize of a decent sleep. 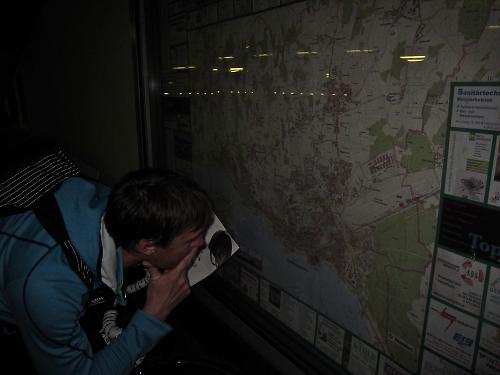 With directions to the apartment written on a scrap of paper we head off into the night, without lights, or helmets, or Hi-Viz, so we’ll probably die. For reasons too complex and boring to go into here I’m on a road bike that’s three sizes too small for me, the bottom-bracket’s making a funny noise and I’m wearing casual shoes, but I’ve had a beer so it’s okay. Thankfully Germany is littered with bike lanes so we safely cruise through the blackness of the trees around the lake that Friedrichshafen sits on, it’s almost romantic. We get lost so retrace our steps and try again. We get lost. We ride along a narrow  and dark suburban road, it’s not down here, we walk night blind down a gravel road that ends in a barrier, it’s not down there. We circle and criss-cross a small group of houses, it’s nowhere here either. We spend at least an hour pedaling down every road in the area, squinting at road signs in the dark and we still can’t find it. What started out as quite a fun little adventure, noodling around an unfamiliar city at night on bikes has turned into a tired, grumpy and anxious need to find somewhere to sleep. 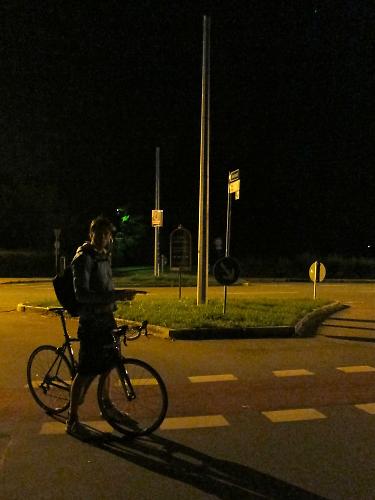 We head up the hill towards a main road with a cunning plan to ask a passing taxi where the address is, maybe even pay it to let us draught it there. We bump into two lads and ask in 30 year old C-grade German where we are. One of them is from another part of Germany, one of them is from America. That’s not helping. We cruise down the road a bit and incredibly the second car that comes along is a taxi, with much flailing of desperate arms we stop him and thrust the bit of paper with the address under his nose. He understands our plight and even more incredibly his taxi is big enough to put two bikes in so he folds down the rear seats and wodges them in. We motor off towards another part of town entirely which is a bit of a worry, this is one of those stories where they find two bodies hurriedly buried in the woods isn’t it? 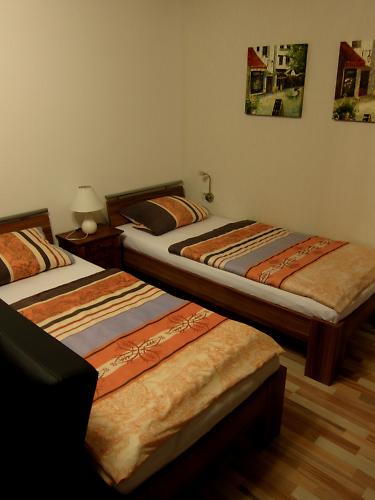 Less than five minutes later we’re outside a block of flats in the middle of town. Mat tries the key, it opens the door, there is relieved cheering, we give the taxi driver too much money and are so grateful that we both shake his hand. After a bit of research later it turns out the directions we were given to last night’s accommodation were completely wrong, obviously, never wholly rely on google for finding places. We carry the bikes up the stairs into the apartment where we stand aghast. There are beds, two proper beds, with sheets, and they’re over three feet apart. This is luxury. I fall asleep as soon as my head hits the pillow. It’s only five hours of sleep, but blimey, what a great sleep.