Stay Classy:Well Handled RT - The Team
Starting a race team, from affiliation to kit design - there's a lot to consider!

What do you do if you want to start your own race team?  We've all (probably) watched a LOT of pro cycling the and thought that we could do a good job of organising a team, giving riders a sense of purpose... or designing a better kit (Katusha... shudder).  So what would make you do it?  James Ashberry started Stay Classy/Well Handled RT in 2012 with his mate Iain Bolton after they decided that they'd like to give it a go.

If you start it... they will come

2012 was their first year with 5 members, it started small but has grown to 16 members in 2013, primarily in the Newcastle area but there are members in London, Yorkshire and Scotland.  That's a fairly decent increase, not that James and Iain are expecting growth like that year on year, they're looking for sustainable growth that reflects what they offer as a club.  Their sponsorship has increased, with another four companies being added to the kit.

The idea for starting the team was straight forward, looking at their respective clubs, Iain and James thought that there was a market for a new type of club with less focus on the traditions of their former members, that they didn't see to be too relevant to the modern cyclist. They wanted to move forward and provide something different, they jokingly called themselves the “outcasts of the North East”, but they admit it was a pretty big day when the CTT (Cycling Time Trials) affiliation certificate arrived on the doorstep.

Expanding the club remains an issue, James and Iain don't want to poach members from other clubs.  That leaves two potential sources - those new to cycling who aren't attached to a club and those who are unhappy with their current club and want to move. They're not just aiming at local membership, anyone in any location is welcome to join, but accept that people will usually be attracted to bigger, or local clubs so new membership remains a challenge.

Their current size doesn't allow them to offer the benefits of larger clubs, such as family club runs, supporting youth riders or racing support that other race teams may offer.  They focus on providing a friendly atmosphere, distinct club kit and a promise that there won't be any intra-club political problems, offering more of a co-operative feel to the club – they want the members to consider that they themselves are the club.  For James, it's all about the membership: “I'd like to be able to look at the club in say 3 or 4 years time and see a good healthy membership of riders who go out on a Sunday, proud to wear the kit and colours, and from that there be a good contingent of racers who compete in local club and open time trials. That would be a fantastic place to be.” 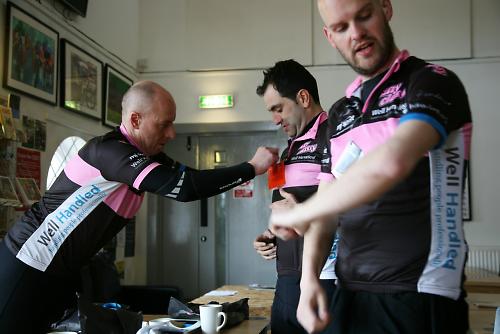 A difficulty faced by James and Iain was deciding what the club offered to its members, currently membership will buy you a club jersey and a years membership.  Renewals or non-jersey join-ups are cheaper.  The club are open with what the benefits are, they organise two events annually, and would like to have their own stock of numbers, high-viz bibs and signs, which they are currently borrowing from other clubs.  The TT's that they organised last year were a 10 and a 25, currently a series of 3 10 mile TT's are pencilled into the diary for 2013 after receiving positive feedback from last year's events.  One SPOCO (sporting course), one flat, and one rolling, none of which are on dual carriageways - feedback from last year was that dual carriageways aren't favoured by competitors.

Why CTT and not BCC?  The 5 riders in 2012 were only interested in time trialling so the CTT was the perfect fit.  CTT affiliation is cheaper than BC membership and as a small club with limited members, the BC option was too expensive and unnecessary for the aims of the club.  Thinking locally, Stay Classy/Well Handled are also affiliated with the N&DCA (Northumberland and Durham Cycling Association), which allows the riders to qualify for their BAR should they wish to compete.  Thoughts are already looking to the future though, with the increase of riders for 2013, BC affiliation is something that may be considered if members are looking to partake in BC sanctioned races.  Members are asked to hold BC or CTC membership for the insurance benefits. Iain runs Well Handled (a patient handling training company) and James is owner of Stay Classy Creative, (a graphic and web design company) based in the North East, they're both “particular” and had strong ideas about what they'd like to wear.  By their own admission, their start point was “Leopard Trek kit, but in pink”.  It's from the Stay Classy logo that the club's trademark pink kit accents have developed, which was in turn influenced by the Giro's Maglia rosa – the colour of success, style and determination – something they wanted to be reflected in the club kit.  For 2013, they're proud of the fact that they have a bikepure.org logo on the cuff of one of the sleeves.  It's a cause that the club believe in strongly and showing their support for Bike Pure was important.  Having an avant guard kit, something with distinctive style, is important to the team, James and Iain are well aware that some club kits are stuck in the 70's and 80's and that wasn't something they wanted for their club.  It's not just cycling kit (that's jersey and skin suit, bib shorts, socks, gloves and caps) that needs to be considered when looking at starting your own club - they also have the embroidery options ready for a polo shirt and hoody.

Starting a club is hard work, both James and Iain have admitted that there was more to organising themselves, the riders, the kit and events than they originally thought.  It's not going to be for everyone either, from my own club experience, I'm aware of the fact that there's a committee, need for support for events, marshals, organising membership and so on.  They're tasks that can be distributed among a number of people in a larger club, but is done by one or two in a small club such as Stay Classy/Well Handled.  Financial pressures of joining a large affiliated organisation such as BC are difficult to justify with small memberships, so looking elsewhere at local affiliations may help.  This won't always work if you want to offer a race team  the ability to compete in BC sanctioned events, which is the usual standard for cycling in the UK and is the most widely recognised due to the successes of GB's Olympic athletes and Team Sky on the road.  James is keen to tell people not to be discouraged though, diversity is good and you won't know what it's like to create your own club or race team until you've done it.  There are, however, many things to think about before you start the process.