HOY Bikes: the journey so far

The summer of 2012 was a memorable one for me. When Sir Chris Hoy was powering away from Maximilian Levy to take the Keirin title at the London Olympics, I was halfway up an Alp struggling to get a phone signal to find out the result. Just a few weeks later I'd be treading the halls of the Eurobike show with the man himself, working with him to create the new bike range that bears his name.

New brands seem to be popping up regularly these days and sometimes it can be hard to see, or to understand at least, the point of difference that makes them worthwhile or desirable. Every section of the market is full of choice. So when word trickled down to me that there was an opportunity to work on creating another new brand, I was interested, but also a bit apprehensive. What kind of bikes? How would we make them stand out? Well, a good name helps. And they don't come much better, or bigger, than HOY.

It turned out that Chris was thinking of creating a bike brand and we were in discussion about a possible partnership. Interest – and a dose of awe – was now combined with worry. I don’t ride track bikes. To tell the truth I’m not a big fan of fixed gear; I’ve ridden them and it’s just not my thing. Maybe they’re better on a track – I’m yet to find out. If I’ve put together bikes that people like in the past it’s because they’re bikes I like too. But working with Sir Chris Hoy would be a huge opportunity, even though making bikes for an Olympian way outside my experience. Well, apart from Eddie the Eagle. He rides a Genesis Equilibrium. Nice one Eddie! 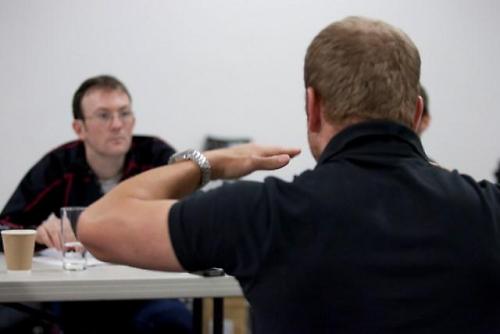 It was all-go after Chris’s Olympic success and though the partnership details weren’t finalised we were already discussing the gist of the bikes. It soon became clear that Chris’s aims were less at a world-level carbon track bike and more about inspiring greater cycling participation, and this is an area we felt confident in. Soon after the Games, Chris headed out to Eurobike with us and we spent time looking at and talking about bikes. It was pretty surreal and a little overwhelming to be wandering around with a sporting legend. It was reassuring to establish that he shared our taste in bikes: efficient, effective, get the job done, much like we expected from his racing. We had track, road and city bikes roughed out in a way they’d be if it was my call on geometry and tubing and it wasn’t a re-design job to get them to where Chris wanted them to be. Talking to Chris about bikes, it’s clear that he’s as passionate about cycling as he is dedicated to racing. We went off-track talking about the detail of a steel framed Japanese Keirin style bike quite quickly. That’s how the best bikes come about: people with passion for a product get fired up and act like the greedy kid in the tuck shop. Best stuff first and pile it on. So there’s now a long-term track bike project in the works and it’ll be something very special and unique, to go alongside the more affordable HOY bikes that we’ll have in the shops. 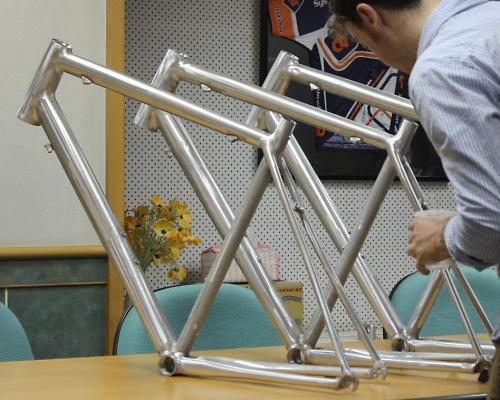 While waiting for test bikes to be finished off, we were on mountain bikes in Cannock Chase. Chris hadn’t ridden off road whilst he'd been focused on the track and was keen to see what had happened since his XC racing days. Wheel sizes had changed, forks had got bigger and better. First run down a section of trail and we were hanging back for Chris. I wondered if Hoy mountain bikes may not be so credible. More fool me… obviously he can pedal uphill and it only took a couple of runs down the trail for his BMX and MTB skills to come flooding back. As we tired, Chris just got faster and would’ve put most regular mountain bikers in their place.

He’s so down to earth that I sometimes forgot who I was following down the trails. While we stopped to catch our breath and talk about how the mountain bikes could be, Chris said hi to some lads who’d recognised him straight away under the helmet and shades. We’d ridden 3 different wheel sizes and a few different models of bike. Chris preferred some aspects of the bikes and steered our ideas, but didn’t want to dictate numbers. We were making mental notes of what Chris liked and why, Joel was thinking of trends and colours and I was being a numbers geek. A good team was taking shape. I felt like we were custom-building bikes for him. That was a good feeling. When the first bikes had been checked over in Taiwan (lots of photos emailed back and going to-and-fro excitedly) they were shipped over and I rode the top spec road bike as a close match to my usual ‘best’ steel road bike. I was trying to think about how it ‘should be’ and ‘is’ as I pedalled but it ended up simply feeling good to be riding a Hoy bike. I was really pleased with the ride. Familiar-feeling, but with traits that came from someone else’s influence. It felt very good, very fast. It fitted perfectly, perhaps better than any other road bike I’ve ridden. It was efficient and punchy on the climbs but it didn’t beat me up like I thought it might. It was also stiff, tracked well round a corner and felt very balanced. To me that was. Chris corners and pedals a lot harder than I do! We went through a testing process with the road bikes early this year. Chris had a few of the bikes while away from the UK and before that all of us rode a closed road track with him as he got a first impression of the road and city bikes. Word spread about what was going on at the track as we tested the prototypes; a hundred or more came to ride with him the next day. Chris came out to the factory too, and joined the guys making the bikes on a ride through the streets of Taichung. The whole testing period was a nervous time for me. We’d prioritised certain aspects and I’d not wanted to do anything too predictable on the numbers. At the same time, how far can you go with a road bike geometry? Chris agreed with us on handling, tracking and stiffness; we learned how to go into corners faster than before by following his lines and braking points. He rode different frame sizes and stems and a few changes were decided on for production samples. It also confirmed the basis of a fitting method that we’d been working on; we learned a lot from his experience with fitting and position. Chris and I are about the same height and a couple of millimetres off the same saddle heights, so by a formulaic fit system we could ride the same bike set up but obviously our set ups are quite different. 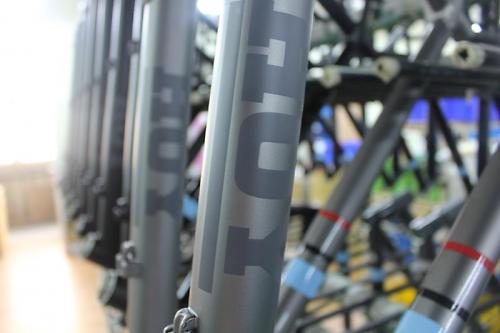 The first bikes had a few differences between models. I tried out PF30 BBs and smooth welded frames (both double-pass welds and filler types). Filler looked great but we all agreed it felt a bit fake to use what’s basically polyfilla on an aluminium frame. The PF30 BB shell and chainset was to try out this ‘stiffer’ theory as I was sceptical of it. Chris’s take on it was that if he had no issues with sprints on Dura Ace track cranks, why risk BB durability? I liked that. Stick to what works, in this case good old BSA threaded BBs. Hoy-proof. With the HOY bikes it wasn’t always about what we did, it was also the things we didn’t do.

The same will go for the carbon project that’s in very early stages. We couldn’t release a wide range of bikes and do things well so we wanted to build the range in a manageable way. Track bikes are close to test-ride bike stage now that Chris is back in the UK with test ride time. Youth bikes are also being sampled. Busy times. And this new brand does have a point of difference: it’s Sir Chris Hoy’s bike range. There’s great bikes in the range that are shaped by his input but it’s more than that to me, as I felt while climbing a hill in France trying to get mobile reception or on that first test ride, it’s about pride in our most successful Olympic cyclist, an genuinely inspiring guy on a bike. 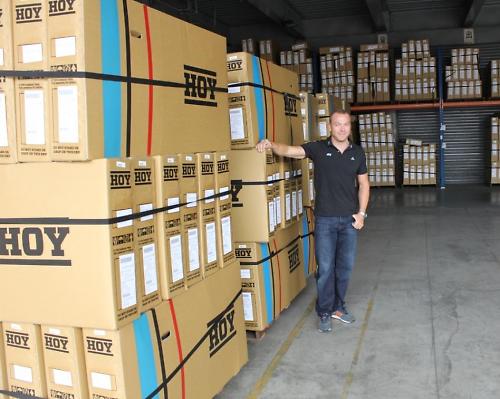