Hell Is Other People

Riding 100km off road on a 'cross bike when it's muddy out: it's hard.

Specifically, Hell is all those riders faster and fitter than I am, churning up the byways of the North Cotswolds for me. Bastards. It's not like the HONC isn't challenging enough already.

I'm off to do the Brevet Cymru (400km) in May so I need miles. The Hell of the North Cotswolds, organised by Winchcombe CC, is the daddy of CX sportives; it may be a new trend, but this is the 29th edition of the HONC and manages to fit about 200km worth of suffering into 100km of back roads, byways and singletrack. Had we been riding it two weeks ago we'd have been moaning about the cold as we ripped round on bone-dry trails scorched by the east wind. As it was, Spring sprang a leak and it was claggy out. So be it. 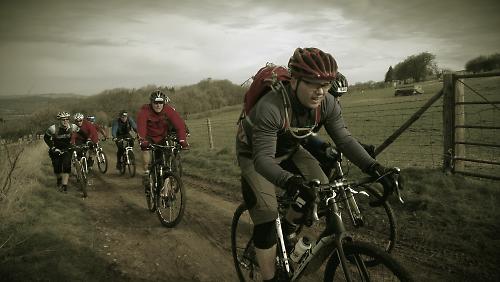 I've never done HONC before. The first climb lulls you into a false sense of security; okay it's long, but it's steady and well surfaced too, a nice gentle hors d'ouevres before the main course. A main course of mud, and pain.

next up, a flat bridleway rim-deep in sloshy gloop. That's okay though, because I'm on a test CX bike with narrow tyres which cut through. for a bit. Slower and slower we go. MTBs get so bogged down with cack that the wheels stop going round. Even my CX bike is starting to pick up a half-field's worth of grot. At some point along this hateful slog I have an epiphany. I'm going to be carrying my bike a lot. Possibly as much as half the time. 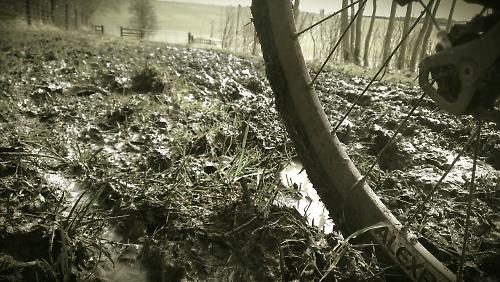 The next bit was even worse, just slippery, muddy grass with nothing to cut through to for grip. It's impossible to ride on the close-tread tyres the bike came with. Even on the slightly downhill bit it's quicker to shoulder and walk. If you're rocking bottom gear up a climb, that's okay: it's what they're for. Along the flat, well, sometimes conditions aren't ideal. But if you're in your winching gear going downhill, you need to take a long hard look at yourself. Somewhere along this section I spotted this guy, who found a stick that worked for scraping the clag from his tyres and decided to keep it, tucked under his seatpack for the next time. It was that kind of a day.

Or so we thought. The first 25km was the worst, at least in terms of having to pick up your bike and walk with it to the next rideable bit. An attritional battle. But further into the ride the HONC relies more on the byways and green lanes, rather than bridleways. The signs are always the same: you're ticking off k's on the tarmac and suddenly you bimble past either a 'no through road' sign or one of those 'unsuitable for motors' ones. And that's the tarmac's cue to disappear, leaving you with an altogether more traditional kind of a surface. Best case scenario it's a wide chalk trail, rendered solid and fairly smooth by the passing of 4x4s. Worst case scenario: grass. 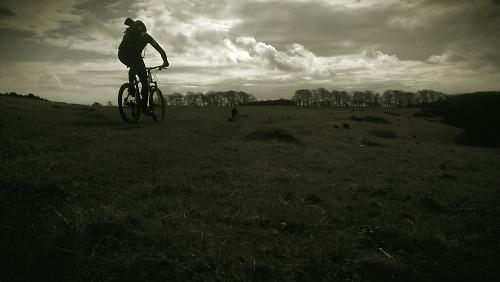 God, the grass. On a dry year no doubt you can zip along it like tarmac. This year is was like riding through treacle. On flat tyres. Into a headwind. Soft and energy sapping and hateful and swear-worthy. There was quite a lot of grass. Most of the time there really was a headwind, too.

By the time I made it to the half-way stop I was flirting with the you-need-to-go-the-short-way cutoff time. In another year I'd have taken it without a second thought. But like I said, I need the miles. So off I set, feeling thoroughly wretched on the relentless slog out of Guiting Power with a belly full of banana and sugary tea.

I had my second epiphany about then. I'm training for an Audax, and this isn't about records. The only things I can break are my body, my bike or my duck for this ride. So long as I keep the pedals turning I'll be back in Winchcombe eventually. So head down and keep going. And I started to feel a bit better then. Not strong, exactly. Just a bit more determined. And the terrain was a bit easier than the first half, albeit with the introduction of even more wind. Did I mention it was windy? It was windy. 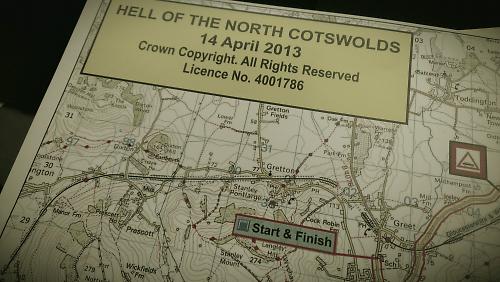 HONC is all the better for being a grass-roots event. It's low-key, there's no electronic timing, just a happy bunch of volunteers ticking off the checkpoints on your card. You can ride it on whatever you like and there's a pleasing mix of old and new MTBs and 'crossers, and plenty of young riders willing to give it a go too. Some bits of the course favour a CX bike and others something with a bit more bump cushioning. For the most part I was very happy with my mount of the day, a Pinnacle Arkose Three disc-equipped cross bike. Although at the bottom of one particularly brutal rocky descent I didn't have the strength in my arms to open the gate at the bottom.

Playing dare with the Garmin whiled away a good few miles nearer the end. Following the blue line kept me sane and gave me a heads-up on the terrain, but there's no distance shown. Just a swipe would tell me how far. How long can I resist? In the end I resisted until 76km, a psychological boost since I'd pegged it at about 10km less than that. Some more grass and grunting and pumped arms on rocky descents and I caved again, and it was 90km, and I knew I'd make it home. Although the jet wash people had packed up by the time I did. I was hoping the rain on the M5 would get the worst of the dirt off but the bike's still filthy, save for the bit of the wheel that was poking up above the roof. I didn't have the energy to clean it. 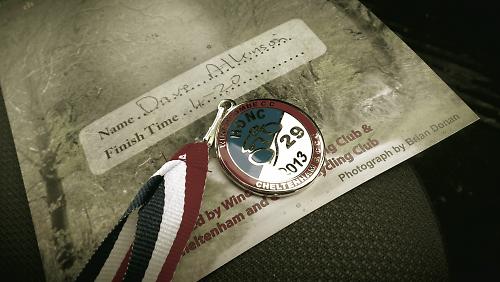 Hell Of The North Cotswolds