There’s Been A Terrible Terrible Mistake.

VecchioJo goes on holiday by mistake.

I appear to be skiing. I hate skiing.

I’ve tried downhill skiing and I’ve tried snowboarding and I hated them both, although snowboarding was a little bit better if I was forced to do it again. As a cyclist used to making my own belligerently independent way around the place I resented paying someone to take back up to the top of the mountain again. Cyclists make their way up to the tops of hills using their own strength and strong will, their heroes are hewn from those that can climb with power and panache, handing over a lot of money to get to the top of a hill only to enjoy the downhill bit went against everything I’d spent a lifetime believing in and struggling towards. That’s not to say that it wasn’t fun, but it didn’t sit easy with that persistently nagging purist part of my brain.

That’s not to say I don’t admire those that can controlled fall with style, watching the latest skier or snowboarderist throw themselves off a mountain, carving that fine line between stupidity and beauty is something that will always excite me, and I can snooze in front of a post-ride Ski Sunday with the most dedicated of them. But a sport that you can only enjoy for a few months a year once you’ve endured a two hour flight and one hour transfer isn’t really my thing, I’m more of a “from the front door” kinda guy. And I don’t need a lot of clothes that are mostly useless 51 weeks of the year.

But still I appear to be skiing, almost by mistake. I’ve somehow been convinced by Exodus adventure holidays that cross-country skiing is a great winter break for cyclists. It uses roughly the same muscle groups, and a few more, it’s properly active – recognized as one of the hardest endurance sports, no-one’s knowingly said “Dude”, which is a plus, and it will be a nice break from another week of trudging around grey damp icy British roads. I’ve seen cross-country ski racing on the telly in the Winter Olympics and the effort and speed and the way competitors collapsed over the line certainly struck a chord with the competitive me, and for reasons that I’ve yet to successfully explain biathlon - cross-country skiing combined with shooting - is a sport that I could happily move to a snowy country to take part in. I think it might be the gloves with the flippable trigger-finger.

Cross-country skiing is all a little bit different to your usual skiing. You don’t need chair-lifts for a start. The boots are soft and easy to walk in, and they aren’t rigidly connected to the ski, the shoe is free to pivot around the toe so you can walk with the ski, and the skis are thinner and lighter than your ordinary ski too. Best of all, if you’re a cyclist you’ll get away with wearing your pedaling clothes. As cross-country skiing is an aerobic sport you’ll be getting pretty warm when hupping and puffing up and down slopes so stuff that’s breathable and wickable yet weather resistant and cold proof is perfect. All your winter cycling kit then. I took all my cold weather cycle clothes, layers of thermals, fleeces, softshells and Goretex, the only bit of special kit I bought was a pair of XC skiing softshell trousers for less than fifty quid, but if you have ski trousers already they’ll do just as well. 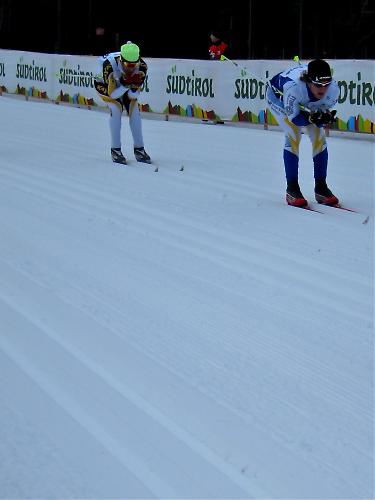 For the week I’m staying at the Hotel Tschurtschenthaler in the town of Dobbiaco, in the Sud Tirol region of the Dolomites, which is in the weird part of Italy that speaks German because the language hasn’t caught up with the geographical politics. It’s a hotbed of cross-country skiing, there’s a knotted-string mess of cross-country routes around the town, the week before they hosted a World Cup event and on our first day we head down into the centre of town to the stadium where a cross-country marathon race is about to start. It’s a bit like watching the Tour de France before embarking on your first lesson in how to ride a bike. No pressure then. 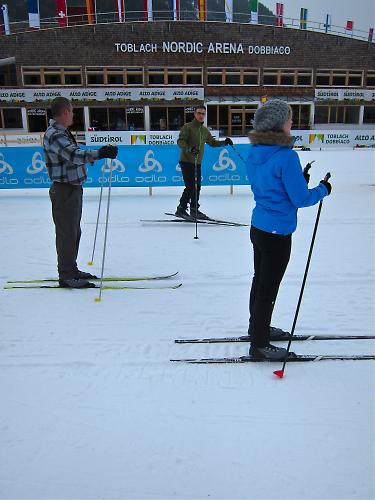 Once the proper skiers have left we spend the rest of the day inside the stadium, striding up and down the field. I’m with a mixed group of half a dozen, some have been cross-country skiing many times before, others are complete beginners. Andy our instructor sends the relative experts for a few laps of the stadium to get the rust out of their bones whilst he leads us newbies through the basics of cross-country skiing. Moving about on skis, with and without poles, gliding, making progress via double-gating and double-poling, and after lunch moving on to more advanced learning with descending gentle slopes via snow-plowing with one leg and then both. 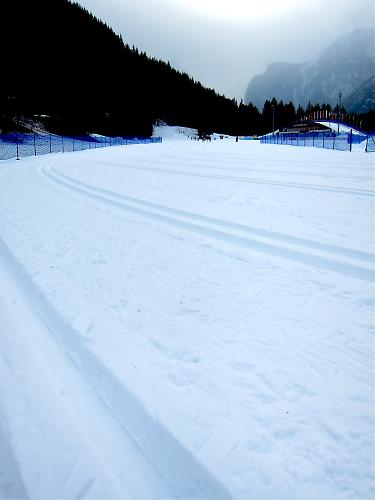 There are two styles of cross-country skiing; classic and skating, classic makes use of a pair of cut parallel grooves in the snow known as loipe, a skiing Scalextric if you will, and skate skiing uses a technique similar to an ice-skater where the skis are angled against unprepared snow to provide propulsion. The latter is the more advanced technique, so we’re on the former, of course.

To be ripped from something so natural and relatively effortless as riding a bike and strapped into two long unwieldy planks and placed in an icy white environment is hard. Incredibly hard. To be reasonably good at one thing and to be suddenly dumped right at the bottom of the skill pool is a harsh bump to deal with. One half of the brain, the being good at something part, wants to instantly go fast and carve corners and glide around all smooth and elegant. The other half is flailing around, almost learning how to walk again. There is a lot of uncoordination, stuttering and swearing. And crashing. Thankfully snow is a lot softer than tarmac. Muscles that never get used are suddenly and shockingly called into action and muscles that are usually all big and useful aren’t really sure what to do with themselves, except propel me into the ground. 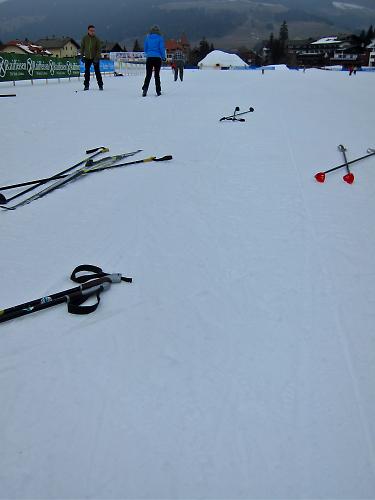 But, overcome the frustrations, the ski poles aren’t even carbon-fibre for crying out loud, and use some of the thought processes and technique enablers that you’ve used in cycling over the years and things slowly, ever so slowly, start to click. Try to be smooth rather than just fast, let the skis do want they want, they know more than you do. Don’t flail. Relax. Relax. Relax. Saying ‘hup hup hup hup’ in the head helps with some kind of rhythm to aid the exaggerated walking gait used in cross-country skiing and linking a few good moves together makes it all start to make sense, and possibly worthwhile, and some sort of parity between the two sports is kind of reached. 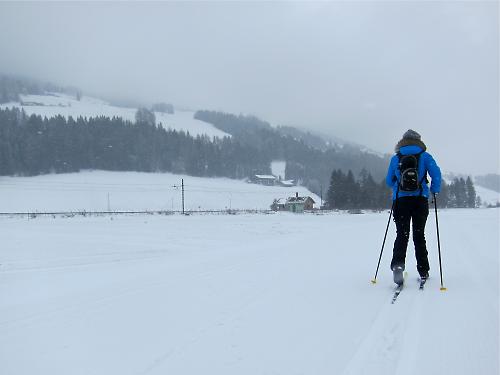 For day two we have to put all that we have briefly learned, or not, into practice with a 10 km ski to Innichen (or San Candido if you prefer the Italian version of the name) for lunch and back, which will be proper XC skiing out in the wilds up hills and through forests and down slopes. Ah. Oooh. There’s a been a big old dump of snow over-night which makes things easier for us novices as the fresh snow is sticky and thick and slows the going, making descents a lot more manageable for the inexperienced than well worn and fast icy loipe. A variety of muscles even spread about the body are tired from the day before, unused to such activity, but they respond well to the “Shut Up Legs/Shoulders/Arms” treatment and after a few minutes poling out of town on the flat are managing okay. 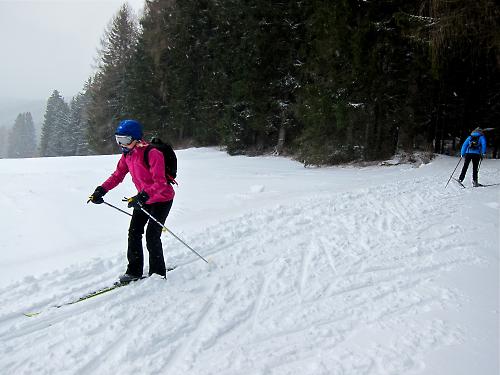 Before long there’s a bit of a downhill to negotiate, with a bend in it. Hang on, we didn’t cover bends yesterday. Thankfully the technique is simple and much like cycling, turn the body to where it wants to go, look at where you want to go, don’t look at the tree. I make it most of the way round before crashing, because I wanted to, according to Andy. He must have seen me on a bike at some point. From there the loipe follows the flat valley bottom before turning right and up into the trees where we get to have a go at herringboning up the hill, that’s pretty easy, and then turning round to practice snow-ploughing. This isn’t. Despite my awesome cycling muscles (hah!) they only seem to work in an up and down and round and round way and have real difficulty in dealing with the lateral forces needed to get skis at an angle to perform an effective snow-plough. At all. And arms that are used to holding something rigid and with control are attached to sticks that wander aimlessly in space, which don’t have brake levers on. There is more crashing. Arse, face, side. Pride. 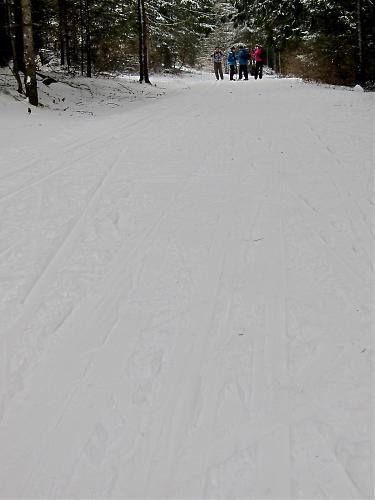 But we turn left into the trees and all of a sudden the appeal of cross-country skiing is beautifully apparent. Shushing along a quiet forest path, with just the noise of breathing and sticky snow for company, a person making their own way through the world, quietly. It’s a lot like cycling. But with more falling over and not being very good. A recovery lunch is very much required at the halfway point and after much fumbling, stumbling, tongue-out concentration and a permanent soundtrack of instructions of what to do in my head I wibble the last few hundred metres home a shell-shocked Bambi. A simple 10km ski has me more knackered than a 100 kilometre bike ride, a 100 mile ride even. I think that’s a good thing. 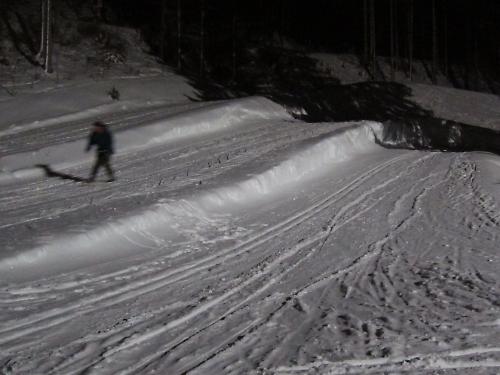 Still, some of us are persuaded to head out later in the afternoon to the floodlit stadium to practice our snowploughs and stuff. It’s tough, because lying down with aching muscles and napping till supper seems a much better idea and outside it’s snowing and it’s cold but we manage to drag ourselves out and despite aching tiredness we make some massive progress in half an hour with not a single crash amongst us, and retire back to the hotel for a celebratory 5 course meal. It’s always worth going out, even if you think you're going to hate it.