The Hunt Crit
Tim Wilkey and Ed Trotman respresent for the South West...

Sunday morning was spent driving up the M4 from our home town of Bristol to Hillingdon for The Hunt, London’s first fixed gear crit race. The weather was pretty gloomy, but the atmosphere was buzzing, with a mixture of nerves & excitement from most riders in attendance. Like us, many people had never ridden a crit race & most of us didn’t have a clue what to expect.

We put our bikes together, signed on then got our kit on for some all important practice laps. We weren’t sure on the ideal gear inch, but we both settled for 80GI, a lot lower than many others, but we live in Spin City so we were prepared to spin to win! Names got drawn for both races, Ed was up first, I was in the second heat.

There was a couple of mad crashes in the first heat, with guys overshooting the final corner & 1 lad hitting a fence hard. He got taken away with a broken shoulder, we hope he’s back on his bike soon. Ed managed to avoid any carnage & qualified in the top 15.

Next up was my turn & I was more than a little nervous. The pace didn’t seem as fast as I thought it would be & I managed to keep in the middle to front of the pack for most of the way, even leading the bunch for an entire lap, which wasn’t a good idea but it felt right at the time.

There was a pretty horrific slam in my round which took 4-5 riders out in the penultimate lap, a mess of bikes & bodies which made the most horrible sound isn’t what you want to experience on your first crit race, but I was glad it happened behind me. The last lap came round quickly & I felt I had a little more to give, I pushed hard & even put in a sprint finish, which meant I had grabbed the 15th qualifying place.

I thought I had made the final along with Ed, and then was disappointingly told that I hadn’t. Allegedly I had crossed the line in 16th & not the qualifying 15th, others weren’t so sure but the organisers’ decision was final & all I could do was make the most of the free burritos from Chipotle & watch Ed ride solo in the TDO colours. I’ll let him talk you through the final race… 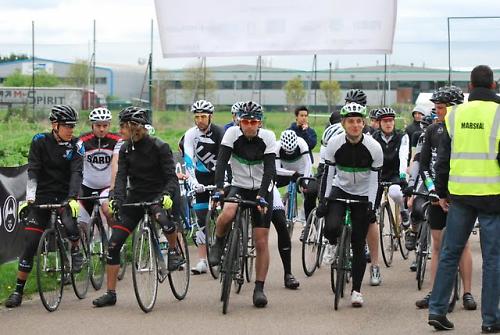 "After the crashes in the first two rounds I wasn’t really looking forward to the final. I’d also spent a few laps on the front against the advice of Kieran and as that ruined me, my approach to this race was to be a bit different.

I decided to stay at the back until the final three laps and then try and move up each lap. This initially seemed to work well, a few riders must have been tired from their first race and with the pace being higher, riders started to drop off the back.
All was going well until after about 15 minutes there was a crash! It happened right in front of me, one foot came unclipped and all I could do to try and avoid it, was to head up a grass bank! I got to the top, unclipped my other foot, ran back down and got going again. 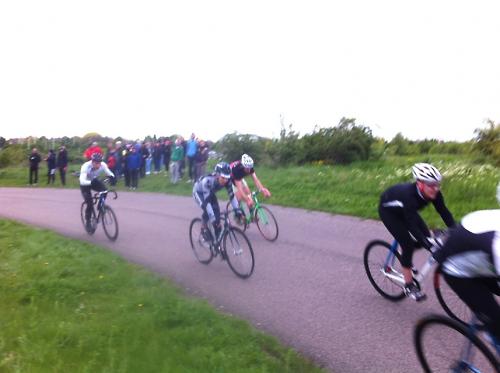 This left me way back in the field so I had only one option, go as hard as I could to get back in the pack. Luckily over the past few weeks I’ve been doing a bit of time trialling so this is what I did. As I caught each rider or small group I hung on for a short while to conserve energy and then on to the next target. I think I passed around ten riders and finally caught up with Rudy Melo and Tim Pulleyn (riding the awesome DSC bike) and we covered the last couple of laps together. Although we kept hearing the words last lap and so there was a bit of confusion as to which lap was the actual last lap!?

It was really good to meet these guys in real life, also Dave from The 5th Floor and everyone else who I spoke to but didn’t get their name, oops!

Looking at Tim’s video footage it seems I took 9th place! Something I’m really pleased with considering the crash, although I did prefer riding on my own than in the group. I think I’m actually more pleased that I didn’t end up in the crash or any other, as there seemed to be a few over the three races. Congrats to the pack that took the top 5 places." 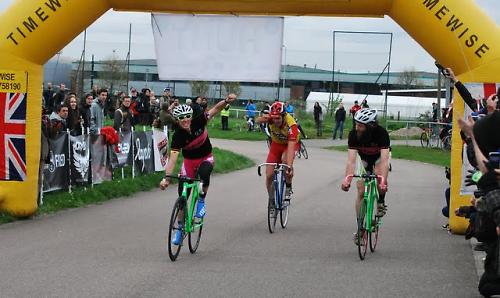 All in all it was a really good and fun day, with just a few things that could be improved. It was the first time this event has been run, so I’m sure that will all be sorted for the next one. Well done to Tokyo Fixed for putting on this event. Expect a badly shot video from us soon!

Tim and Ed blog at Hamiltonwheelers.cc and ride in Trackdropouts colours