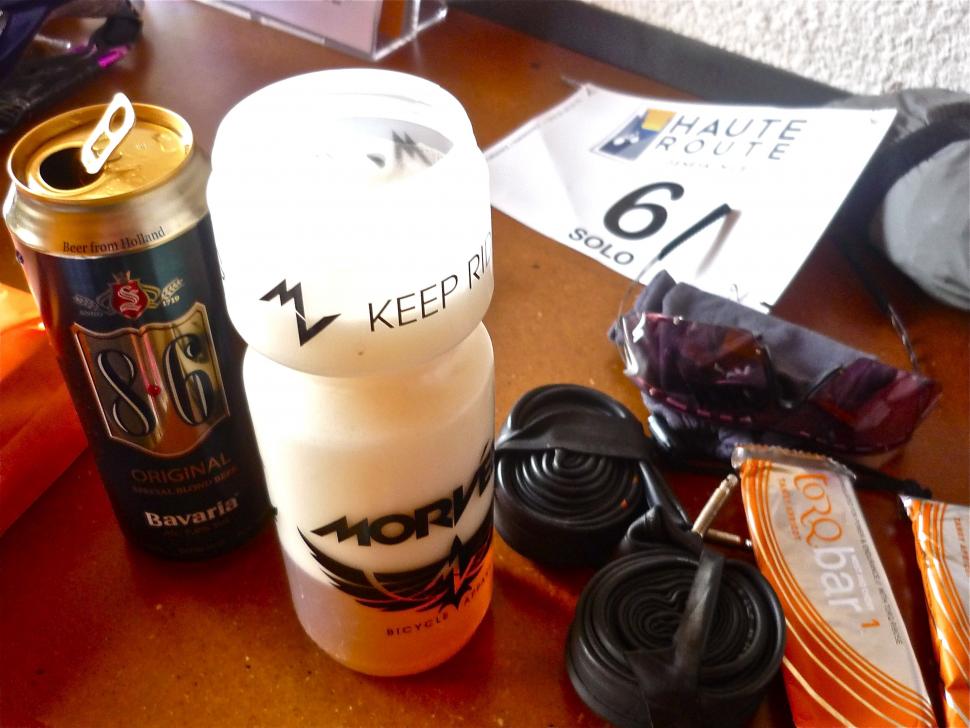 It’s been a couple of weeks since the Haute Route ended and the burst of that little cycling reverie but there are still very tangible reminders of those 750kms; the cycling tan is still shocking, and a certain mark of pride, when I walk up stairs I can still feel the tiny pressure points of my road cleats like a stigmata from the day-on-day cycling, and I’m trying to hold onto the half a stone of weight loss that the week blessed upon me.

It’s still quite hard to adjust to the tedious complexities of a normal life, paying bills, going down the shops for milk, throwing the Hoover around - being told when to start riding your bike, pointed where to go, shown when and where the food is, the eat-ride-eat-sleep-eat-ride-eat-sleep routine was a very nice and simple one to be in. A cocoon that the worries of the outside world never intruded or bothered, basic personal survival taking precedence, a simple life that has its selfish charms.

If I close my eyes I get a View Master image of something that happened during the week, although it often takes a little bit of time to pin-point which exact climb or descent that snapshot comes from, and the smiles those moments create outweigh the pain by some considerable margin, mental albums of friendships, people, roads and cols.

There were a few organising niggles to work out, but it was an excellent event, especially for a first effort, getting 300 cyclists across the Alps without any major trauma is a feat of which Hannibal would be proud. The Haute Route Sportive was conducted with a level of professionalism and efficiency that should make an organizer of any event promoted in this country under the “Sportive” umbrella hang their head in shame. The riders reciprocated and responded with a quality of performance, respect and plain old effort that should make any participant of any event under that same umbrella in this country also hang their head in shame.

If you’re even half thinking about doing the Haute Route, stop thinking and just do it. The entrance fee might appear to be a little bit salty but it soon becomes good value about halfway through Day 2. Having every single junction and roundabout marshaled and arrowed meaning that no rider has to put a foot down to stop for traffic or look at a route card for 750 kms has got to be worth at least 50€ a day of anyone’s money. You could easily add another 50€ for the roving motorbikes providing constant assurance and medical assistance if required, both witnessed at first hand, and a little bit of pacing if needed, and the Mavic mechanic’s car, complemented by the large yellow truck that was there at every start and finish for tinkering and a queue for the track-pumps.

Then there were the food stops at the top of every mountain and the end of each stage supplementing the morning and evening meals, all of which were of a basic but good quality, with pudding. And beer. The carrying of your kit bags from one day to the next removed that logistical nightmare from your shoulders, the free post-ride massage eased muscle tension, and the briefing on next day’s stage, even if it did tetchily delay supper, was worth it, even if just for mental preparation and knowing how stupid early you had to get up.

Essentially the price will be forgotten long before the memories have faded and stories of suffer and joy told and re-told. If you think cost is going to be a problem just don’t have that second Starbucks skinny-latte and instead put the £3.75 in a special Haute Route money-box, don’t waste money on that essential can’t-live-without lightweight widget, go training instead and ride not buy yourself faster and put that money in the piggy.

The bike that I hardly knew at the start of the trip, we have racked up sufficient miles together and shared enough experiences to become, shall I say, good friends. I gave her a post Haute Route clean with a tenderness that most borrowed bikes don’t get or deserve, and a re-tape of the bars, because that little gap by the right-hand brake-lever had been bothering me all week.

My riding buddy has made interested noises in doing next years Haute Route as a pair.