Highclere: weighed on the scales 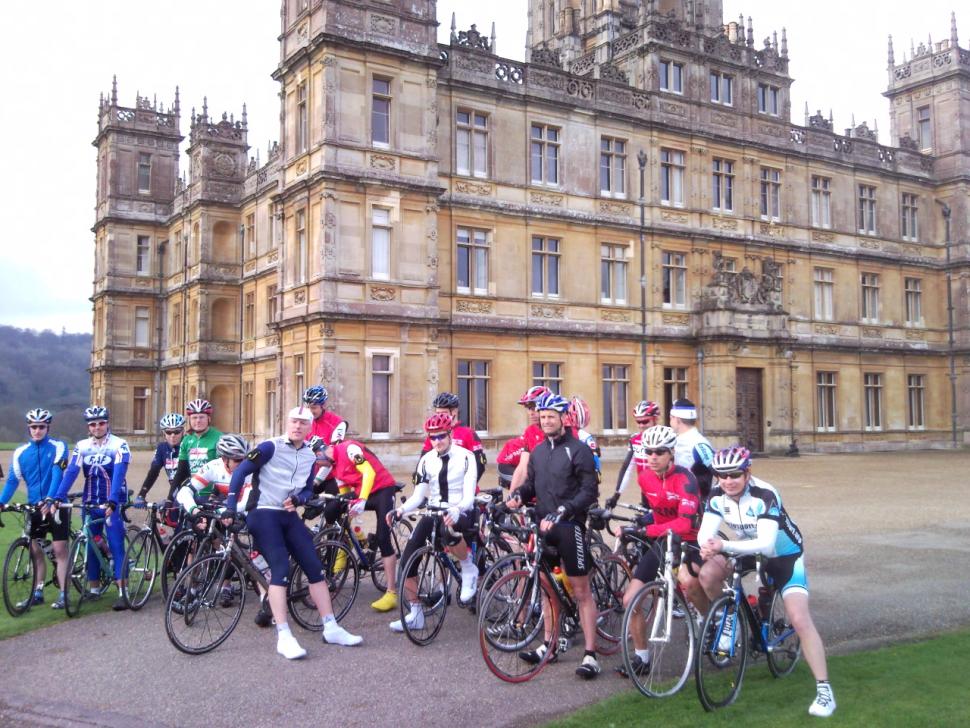 Well my legs feel like they've been through the grinder this morning, yesterday was a fantastic ride but it's always a reality check to ride with people who are much, much fitter than you. I've been feeling pretty good about myself of late, dropped a stone in weight and been getting some more miles in, but yesterday I was weighed on the scales and found wanting... so, what did we learn from the day at Highclere?

1) we learned that it's a brilliant route
It really is a lovely ride. it's harder than the route profile might suggest because many of the sections that are flatter are actually quite rolling so it's hard to get into a rhythm. at the start, before and after the first handful of climbs, it's pretty flat so you can get into the ride nicely. the first climb is tough though. After the second stop it's straight up the fairly brutal Stoner hill, and towards the end it's pretty lumpy, going up to Hannington mast before looping round the back of the Highclere estate. 2) we learned that Championchip trackers are ace
Tom from Championchip fitted us all with a tracker so we could be followed on the route. They're pretty clever devices, with a GPS receiver to get your position and a GPRS modem to send the data to the server that crunches the data. You can also sync your Garmin 705 with the tracker and send heart rate and cadence data too. You strap it to your arm and off you go. People can watch your progress in real time and also replay the race at up to 60x speed after it's finished... the highclere ride is at http://spectator.sport-track.com/22845 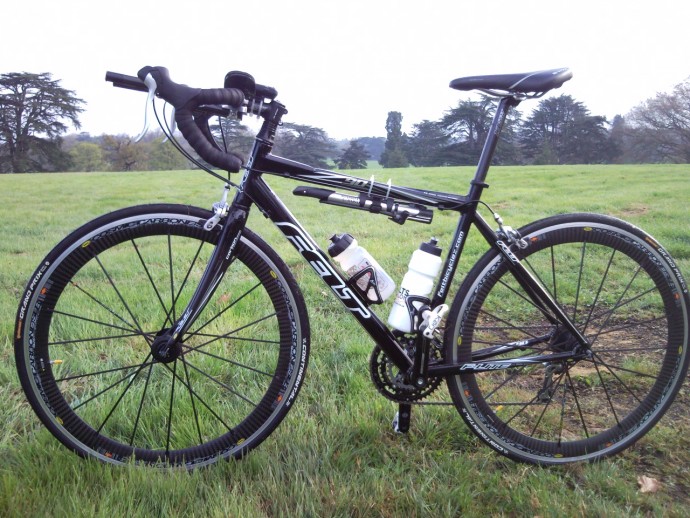 3) we learned that Mavic's new wheels are nice
Not exactly a test but we did get a change to try Mavic's new R-SYS and Cosmic Carbone wheelsets. The R-SYS has been redesigned with multidirectional carbon in the spokes to guard against wheel failure should something (eg a competitor's rear mech) jam the wheel. The'yre nice and stiff, roll well (helped by Conti's excellent GP 24mm tyres) and they're pretty light to boot. 85 miles isn't enough to form a rounded opinion but I'm generally pretty positive about them on first impressions. More than one person I spoke to on the day expressed concern that the spokes would get scratched and nicked in the back of the car and it'd be more of a problem with a carbon spoke than an Alu one. I'm not sure that's the case but I'll take it up with Mavic and see what they say. John rode the new straight-thru-spoked Carbones, I'll get him to post his comments at the bottom of this...

4) I learned that I'm not fit enough
Hardly a surprise, but riding with a bunch that includes a smattering of elite and cat 1 riders made me more aware of my place in the food chain. My goal has got to be to lose weight: I can stay with those boys on the flat but on the hills it's like I'm riding through treacle.

5) I learned that hindsight is always 20/20
Being able to replay the race at http://spectator.sport-track.com/22845 meant I could see what actually went on, and had I known then what I know now we probably would have carried on and tried to finish. We were worried primarily about two things. Firstly, we we were worried that we'd be miles off the pace in the last bit and we'd have everyone waiting around for us when they wanted to go home. In reality, looking at the race replay we were only about 10 minutes behind the lead group at the second feed stop, if we'd really cracked at the end (likely) we probably would have come in about 40 minutes down, and everyone was still hanging about waiting for their tea and sandwiches at that point, so it wouldn't have been a big deal. Secondly, and more importantly, we were worried about getting lost. The front group was beginning to split up and there were only two cars, had we been out on the road we'd have made it three groups and two cars, and we didn't have a map. What we did have, though, we realised later, was a Garmin 705 with a get-you-home function, we could have just followed that back to Highclere.

So all in all, pain and joy experienced, lessons learned!