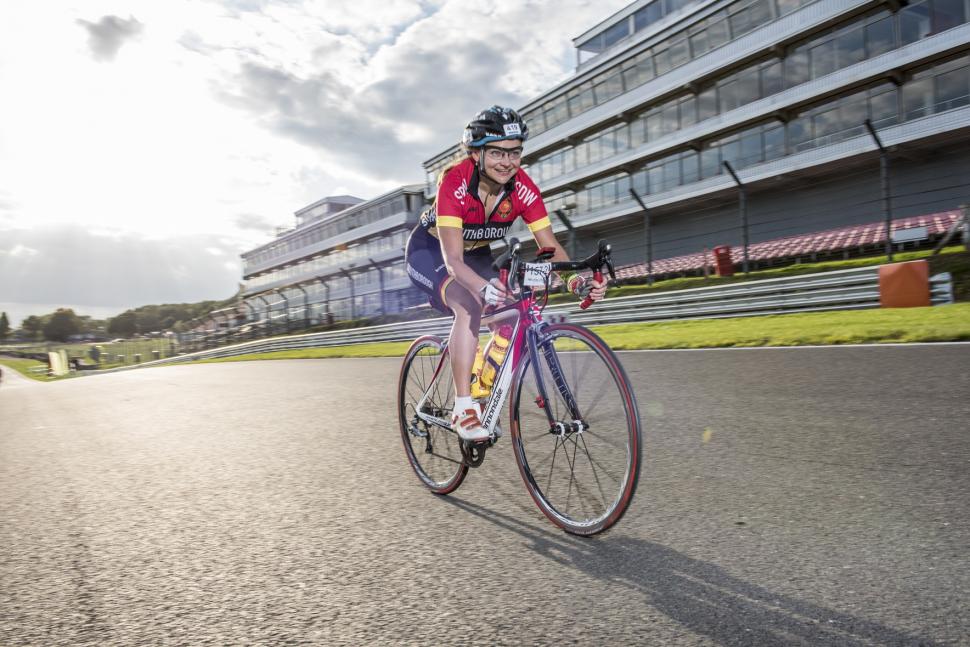 The team road.cc men's squad isn't the only one being sent to Brands Hatch with glory in their sights (we're not talking winning here, more surviving) as the Cycle Surgery sponsored ladies team of six is also heading for Kent. We'll take a look the team and the strategy behind it.

revolve24 is celebrating its second year this weekend and to sum it up it's basically a 24hr relay around the full lap of race circuit at Brands Hatch. You can ride this solo, in pairs or teams of four, six or eight with only one member of each team allowed out on the track at any one time.

There are other events taking place with an Omnium on the Saturday plus a 6hr challenge if you don't fancy the full 24hr and a Dusk to Dawn race that runs for 12hrs in the darkness.

We're going for the full bodied 24hr version and with a 3.9km lap distance with a 65m elevation gain on each one it can be a tough, leg sapping course to ride even if the maximum gradient is only 9% - it feels so much steeper than that! 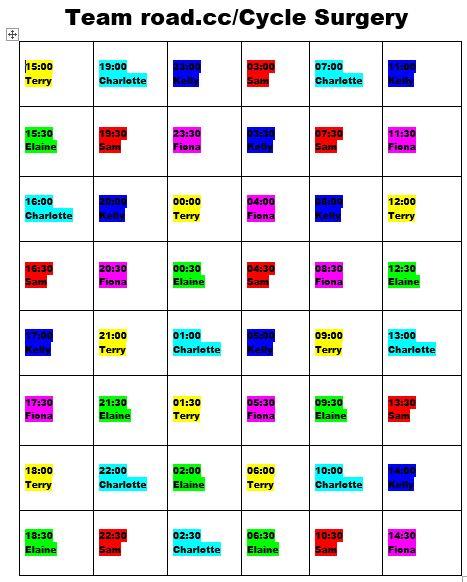 When we rode last year as team road.cc we learnt a lot about pacing and where the drop off in performance in relation to time came into play so with that in mind the Cycle Surgery Ladies will be following a 30 minute track session with 150 minute recovery/sleep pattern. We'll see how it goes on the day.

The first thing we asked Cycle surgery was why they have decided to focus exclusively on a ladies line up to which they replied,

"We went down the women’s only team route as we really wanted to recognise the increase in popularity in female cycling that has occurred in recent times. As the sport has developed over the past couple of years we have held women specific product as an important aspect of our buying strategy and in turn produced a strong representation in our photos shoots and the content that we produce. We wanted to tap into the passion for cycling that many women have and creating a ladies only team for an event such as Revolve 24 has allowed us to do so and really explore the enthusiasm these riders have for both cycling and challenging themselves."

It certainly makes sense, the increase in female riders turning up for our road.cc rideouts, at competitve events and literally just out for a ride on the local roads has surged.

The team are a mixture of road.cc readers and staff from Cycle Surgery with experience and fitness levels covering a massive spectrum. Some haven't ridden a competitive cycling event before so those chilly, dark nightime hours are going to be a real baptism of fire. 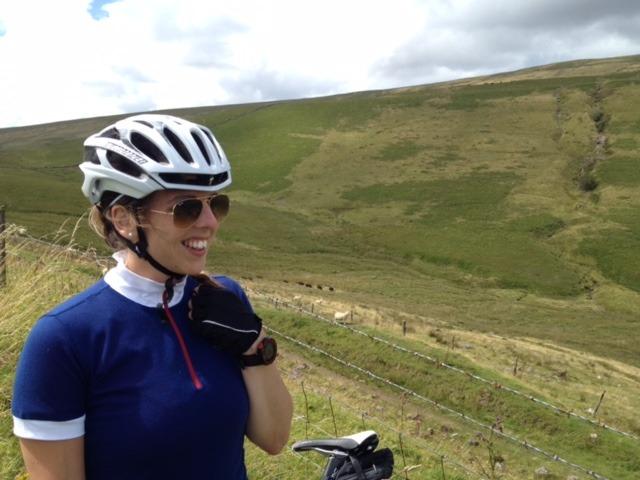 First up representing Cycle Surgery is Snow+Rock Group Content Manager Sam Scott. Sam may spend a lot of time on her road bike but in an interview with Snow & Rock's Copywriter Gerry Wilson she explains her motivation for signing up for the event, “This is an easy question. Imagine a race with no pot holes, no debris and the best thing, no cars. Heaven!”

You can read the full interview here.

Charlotte joined the team literally a week ago after another member had to drop out so she has really been thrown in at the deep end. She's certainly busy having to squeeze in writing the blog below on a flight back from Zurich....

"I guess my cycling ‘career’ started in the same way most peoples did - stabilisers, nettle patches, Mr Men plasters and then generally getting the hang of it. I was however one of the least sporty kids at school (I was the asthmatic one who trailed behind absolutely everyone else at cross country, and don’t ask about anything requiring hand/eye coordination) . Cycling was an enjoyable thing to do, and became transport later on at university. After getting my first job, I decided to get a new bike so I could ride more for exercise. This morphed into commuting a couple of times a week (22 mile round trip) and inevitably the mountain bike was joined by a hybrid and then by a road bike.

The Revolve24 challenge appealed I think because it’s totally different to anything I’ve done before, and I love the idea of being part of a team. I’ve ridden the odd sportive and cycled up Mont Ventoux (although let’s just say the QoM is in no danger from me, I had to stop several times…) but this is a totally different kettle of fish. I enjoy riding with others, but I’ll freely admit it can be a little disheartening riding with those who have more of a physiological gift for cycling than me (namely a Y chromosome and the build of a whippet on the SlimFast plan). Don’t get me wrong, there will be plenty of racing snakes overtaking me at Revolve24 (both with and without Y chromosomes!) but I like the fact that it’s up to me to ride to the best of my ability on my stint without desperately trying  to keep up with anyone else. I’m hoping that being a year round commuter on unlit roads will help with the night shift - although keeping going in the wee small hours will pose its own difficulties I’m sure. I’m really looking forward to meeting my teammates, giving it my all and above all else, having a laugh with the team and enjoying our achievements.

Isn’t that what it’s all about?" Fiona is a bit of a fitness fanatic but for revolve24 she is swapping her running trainers for cycling shoes and cleats to take on a her first competitive event on two wheels. Fiona hasn't been riding for very long, a few months in fact when it comes to road bike ownership thanks to her ever so slightly bright 'Yellow Peril' Mango steed.

We can already see her competitive streak  making itself known with her Strava profile showing regular trips to the Castle Combe for a bit of training in a race track environment. We'll see if all of that 'racing line' practicing is going to pay off. 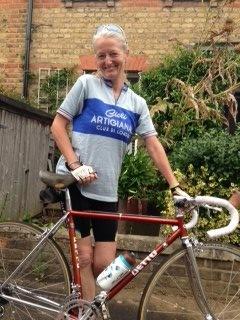 Another newbie to racing is Terry who by the looks of her photo is going to be bringing a touch of retro class to the pit lane at Brands Hatch. It turns out Terry is a bit of a fan of vintage classics and that includes the events, she has ridden L'Eroica in Italy, Britain and Spain plus she is no novice when it comes to riding in the dark being a finisher of the overnight 120 mile Dunwich Dynamo.

Kelly already has the 2016 Ride London under her belt plus a few sportives so we are certainly looking forward to seeing what she brings to the team, especially by the looks of her blog Revolve24 in terms of cooking as well as two wheeled experience.

Put them all together on the 10/11 September, and you have me, taking part in Revolve24. Revolve24 is a 24 hour cycle relay endurance challenge, where individuals or teams of up to 8 take on the challenge of cycling non-stop for 24 hours for the personal challenge, for charity, or to win!

My husband and I looked at Revolve24 when it appeared on Facebook as a suggested post ages ago, and thought 'wow, that would be fun to do sometime'. By sometime, I meant in the future, perhaps distant future. At least a year away anyway!

Then a few weeks ago he sent me a link - Cycle Surgery and Road.cc were looking for 4 women to join their team of 6 and take part in the 24 hour cycle relay around the iconic race track. I applied, assuming I wouldn't get a spot. But low and behold, a few weeks later I got an email telling me I'm part of the team.

So now the minor panic starts. Most people taking part signed up to the event ages ago, and have been training hard for it (some harder than others, depending if they're racing for positions or just taking part!).

I've been on a bit of a health transformation this year. So far I've lost 21 lbs, and massively increased my fitness levels. However this is a challenge on a whole new scale.

Before I can worry too much about Revolve24 however, I've got RideLondon to worry about on Sunday - a 100 mile cycle ride on closed roads around London and Surrey in aid of SSAFA. I'm also very excited to meet the other ladies who are in the same boat as me.

With less than 48hrs until RideLondon, and 6 weeks until Revolve24, let the summer of cycling commence!" 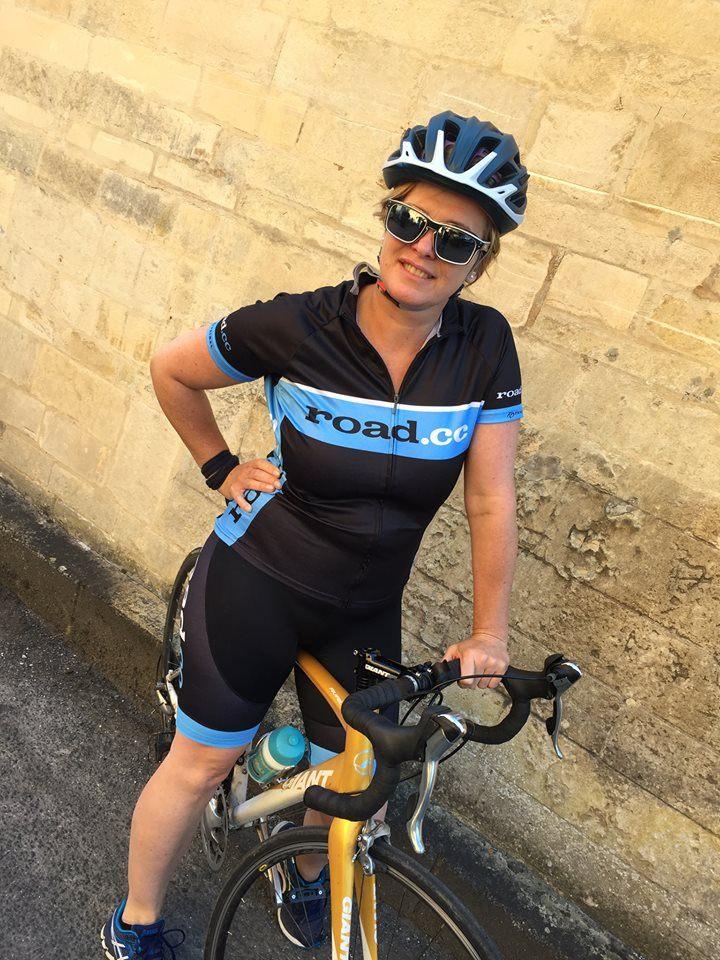 Elaine is Commercial Director for road.cc and is also the Manager for team road.cc, our very own cycling club. Elaine was another late entry to the line up and even with having to attend events like the Big Bike Bash and Eurobike she's still been getting the miles and hills in.

There are even rumours bouncing about mentioning the purchase of new shoes and pedals, 'all the gear, no.........'

Nope, we won't even risk going there ;D

The team are also doing a bit of fundraising for Mission Motorsport, a worthwhile charity we think you'll agree and with each of the riders covering at least four hours on the track in those 24hrs we think they could do with a bit of an inscentive, if you can help then you can sponsor the team here.....

"Mission Motorsport's aim is to aid in the recovery and rehabilitation of those affected by military operations, by providing opportunities through Motorsport.

We are the Forces' motorsport charity.  We are run by veterans, serving officers and motorsport professionals.  We directly support the Defence Recovery Capability, provide respite, rehabilitation, vocational support, employment support and training.

Through participation in competition, our strong team ethos helps to inspire and rebuild confidence; the development of skills including mechanical competencies, logisitics and management all build capacity for a brighter future.

Through team participation in Motorsport, engage those in need who are affected by military operations by:

Inspiring and rebuilding confidence
Helping in the development of new and existing skills to aid them in their future, including providing them with qualifications through our training wing
Developing resilience and their ability to cope with a disability in different and testing environments; instilling a greater degree of independence
For those leaving the service, demonstrate to a wide audience the qualities of ex-service personnel that make them more employable
Providing training and direct vocational support and assistance"