Gravel grinding. We’ve seen the pictures of pristine US gravel, and heard about the adventure factor, and read about disc brakes, one-by drivetrains and weird flared handlebars. Driving up to Kielder Forest, the four of us make light of the blizzard wreaking havoc on the windshield. I mean sure, it’s 200km of bridleways, but it can’t be harder than Flanders a couple years back, or Roubaix in the wet last year, or that stupid time I did a 24 hour race. 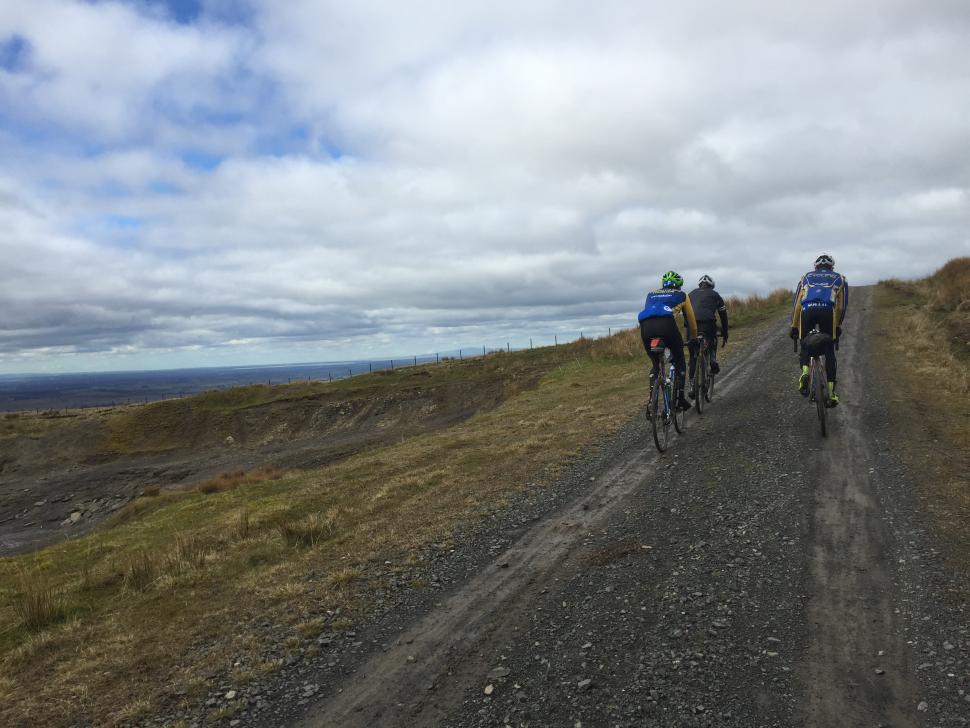 4.30am feels too early. Long rides always have to start so bloody early. On a normal week, I like to lie to colleagues in the office that getting up early and riding to and from work a couple of times a week is all good “training”. In reality, riding is just an excuse to shut off for a bit, and not to have to sit in traffic on the M4.  Nonetheless forcing down cereal and orange juice in the dark has become something of a ritual.

This feels different, though. The usual difficulty of eating too much food, too early in the morning has been superimposed with some other feeling. Kind of like that time I got hit by the effects of Norovirus halfway round Cwmcarn, or like that early morning sicky feeling when you’ve ridden a bike through the night.

We arrive at Kielder Castle in another blizzard. The car park is full of riders talking about tubeless set-ups, number placement and how much food they have. I check all of these things, take my bike over to lean against a post for a blog picture and then sit in silence in the car for a bit. Before I know it, 6.50 has rolled around and we’re in the queue to set off on the neutralised bit. No one is saying much. I decide the sicky feeling has gotten worse. 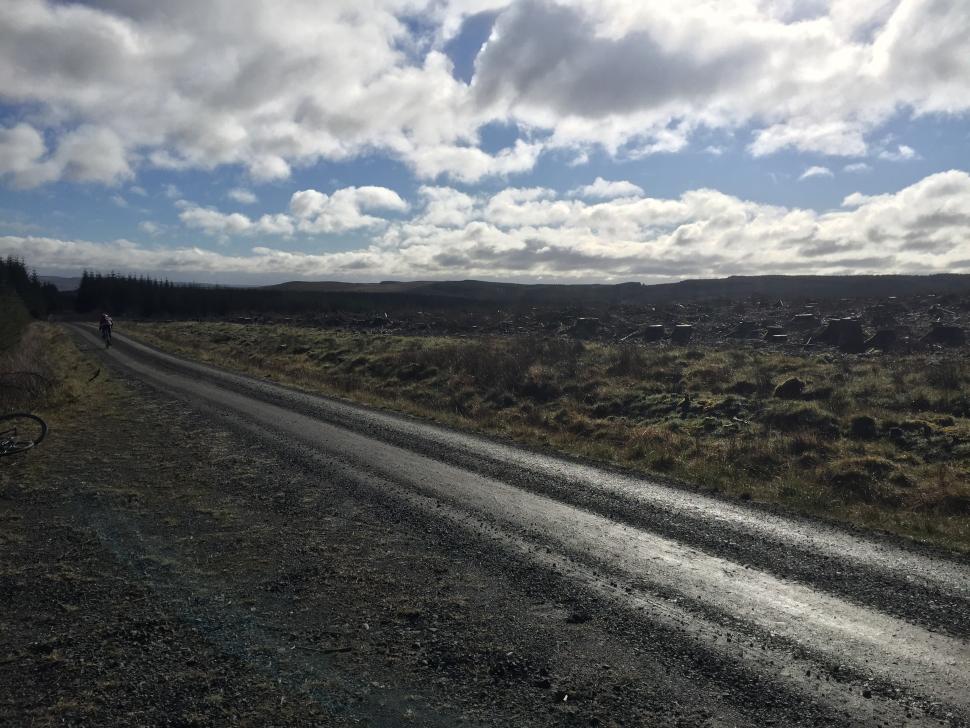 24 minutes later we are rolling. In under a kilometer, we turn off the tarmac and the gravel begins. This is last time we see any real evidence of civilisation for a day.

The first 25km goes reasonably smoothly. At one point I do a wheelie for a photographer. It goes quite well and we roll into the next few descents. They have huge numbers of people lining the route forlornly changing flats in the cold. I double my concentration on the patch of gravel in front of me. 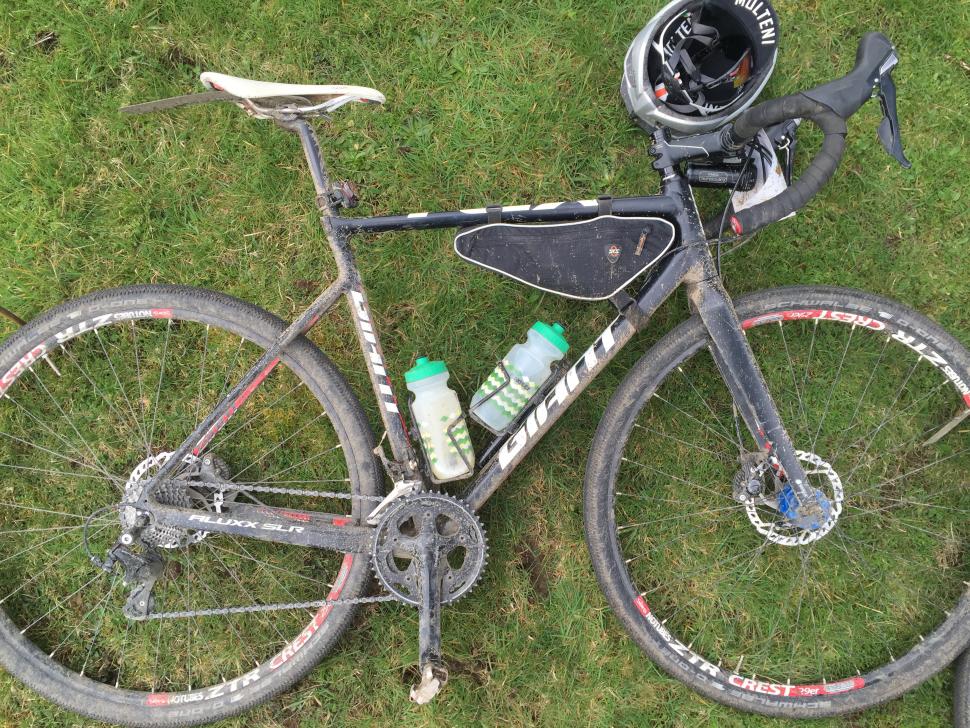 At 30km, we are joined by a big group of riders and by some bizarre progression of events we end up doing through-and-off. On a double-track gravel road. At 40kph. It works, only it’s reasonably terrifyingly most of the time, but the descents feel like an accident waiting to happen. I pull over for a piss-and-Instagram stop and we all discuss the fact that hammering the pedals in close proximity to unknown riders is probably not the best idea.  The sicky feeling has mercifully waned with sunrise. In its place are the first few inklings of true, deep fatigue.

The next 30km go reasonably smoothly, with occasional fifteen-minute rock gardens, single digit temperatures, and skids in corners. We arrive at the first timing point/feed station in good shape and make use of the simply excellent amount of cake on show. I remember to thank the wonderful marshals wherever I can early on, just in case this ride is somehow harder than other stuff we’ve done before and I run out of pleasantries later on. 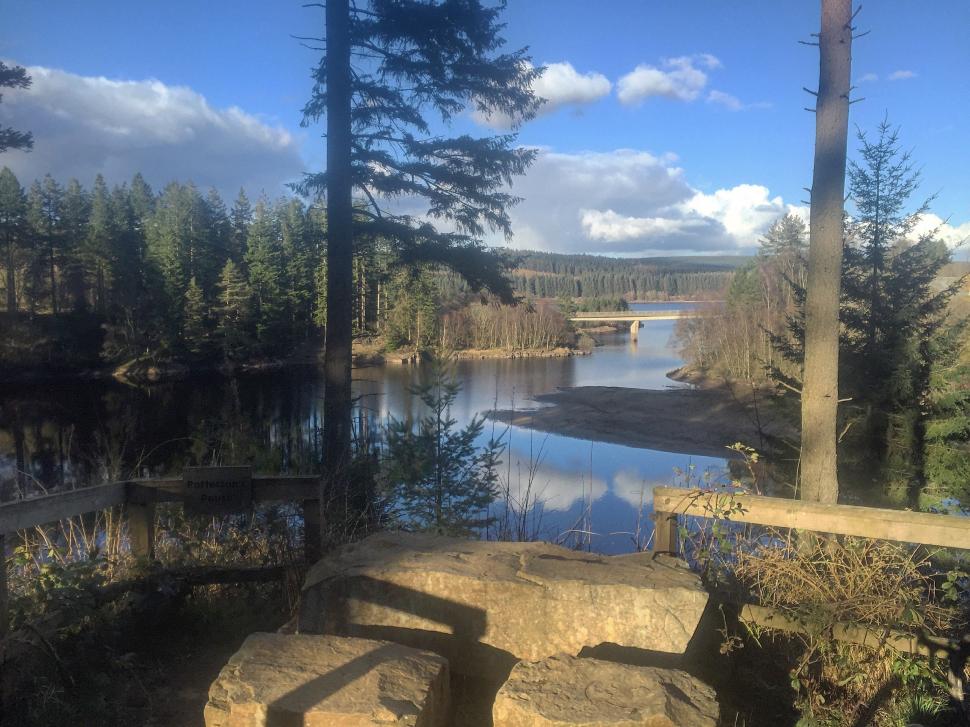 Cresting the 4km climb out of the feed stop I run out of pleasantries.

I actually run out of conversation altogether. I’m struggling to hold the wheels and have to resort to intensely studying my computer.  That’s okay, though, I wrongly assume it must have been one of the bigger hills of the day.

The next stretch is fairly uneventful. We do a river crossing at one point, which is great. All of us try riding it, and we have a 50% success rate – much higher than the overall average according to the marshal standing on the bank, laughing at us. I’m not convinced he has the relevant lifesaving qualifications, but I thank him nonetheless as I have a couple of pleasantries available at this point.  Riding tricky stuff is fun.

The descent down to the second feed stop at 94km is the best of the day. I’m in my element here. I rode the Three Peaks Challenge a couple of years back, and this descent is like Pen-Y-Gent, but faster, longer, and now with added hydraulic discs. I drop the other group members briefly, and as a result, a couple more pleasantries become unlocked for the lovely marshals at the second stop. They have a fire pit in a teepee. They have food. They are my friends. My lack of desire to leave confirms how much I’m hurting. 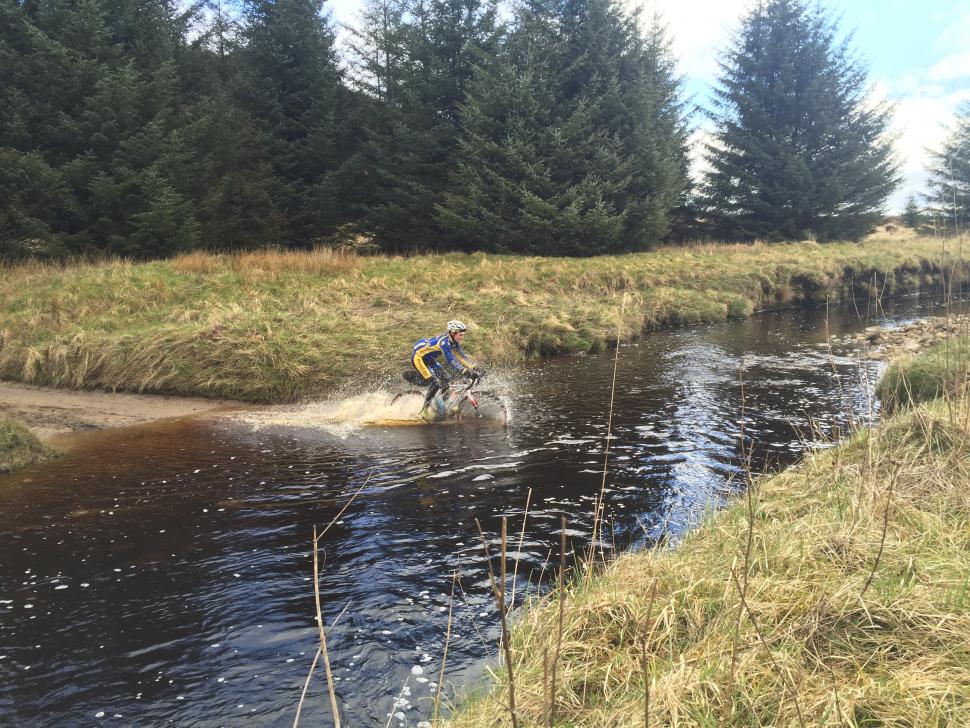 Many hours ago, at the start, I made a note that kilometers 100 to 150 would probably be the trickiest. The steep 8km climb straight out of the feed stop confirms this. I go back to silence, concentration and no pleasantries. We drop down the other side and pop out at the Scottish border. This feels like a moment. Another piss-and-Instagram stop. I eat my sixth or seventh waffle of the day, I’ve lost track by now. We see two motocross riders and realise they are the only people we’ve seen all day that aren't either marshals or competitors in this enormous forest.

I can’t really accurately convey what the next couple of climbs did to me in a coherent manner. I’ve done suffering before, but never like this. For two hours I acknowledge the existence of nothing other than my bar tape. If I think about anything much more complicated than basic addition my vision goes blurry. My stomach feels sick, and yet complains if it isn’t provided with food every fifteen minutes. 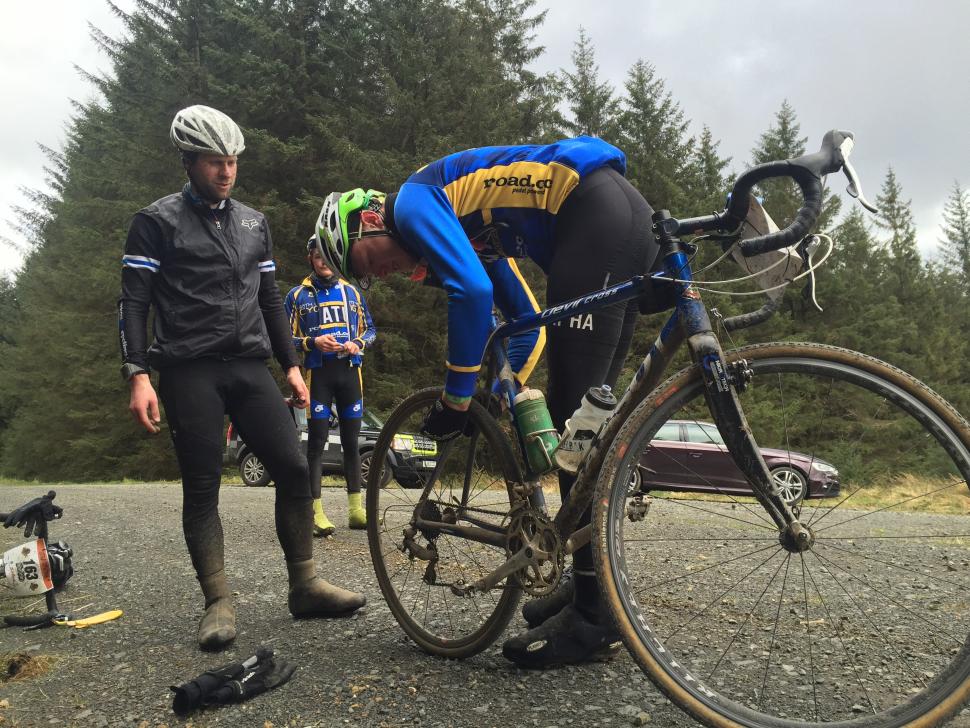 When the gradient levels and I come to, gaunt faces surrounding me confirm that we’re all in the same boat.  There are 80k to go, which to my road-biased mind sounds more than doable. Doug reminds me that our average is 20kph and Adam breaks two spokes right next to the turn off for the short route back to Kielder. Normally the reliable trip mechanic, I have to resort to a lie down in a ditch by the trail, desperate not to be the first group member to crack and suggest the easy way out. 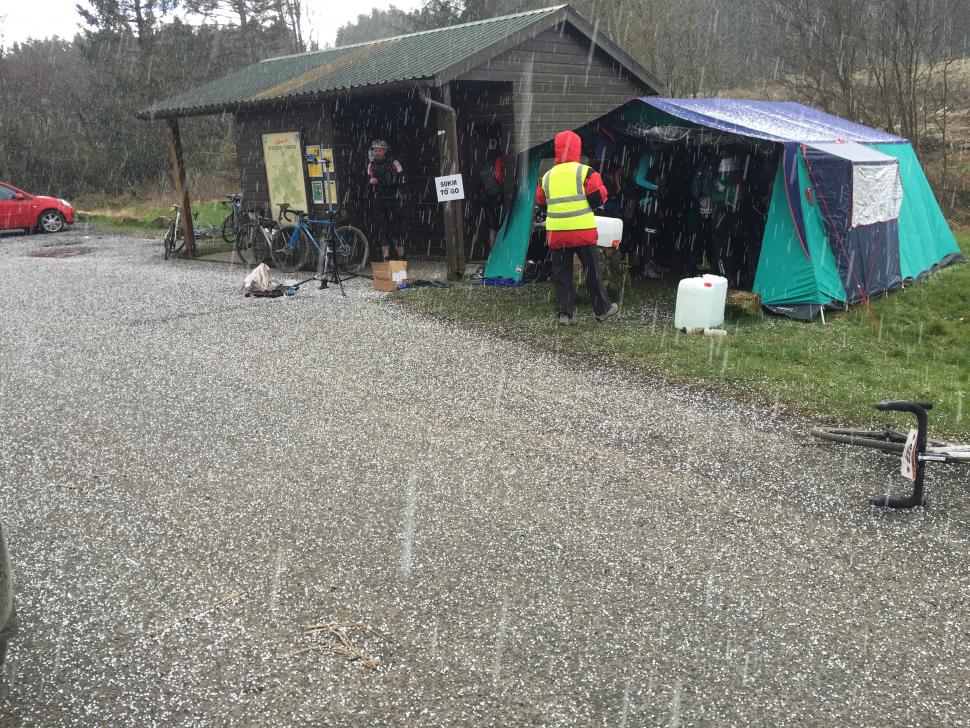 At the third stop, heavy hail happens. I’ve been through a lot by this point, and to be honest it barely registers as it pings off the hardened plastic shell of my helmet.  I take a picture of another impossibly enthusiastic marshal, and eat as much as I dare. At this point my computer reads 3,000m of climbing. We assume that there can’t be much climbing left, and that the remaining 50km will be kinder to us. Naturally, we are idiots. The climb right out of the feed zone is 5km long, and requires consumption of two of the three danger gels I picked up at the station.

One more major undulation amplifies the constant hurt in my entire being. I think about how we said this would be easier than Flanders, as the timer clicks past 9 hours 45 minutes, and the sun begins its slow decline towards the horizon.

We drop down to the shores of Kielder Water for the final 30km. It is insanely picturesque. We pray for flat. We get flat. However, after 170km nothing feels flat. We struggle to maintain a 20kph average, and the battle to maintain conversation is even more arduous. After an eternity, the trail gives way to familiar roads, and we’re back onto the final rise to Kielder Castle. In true testament to just how close to the ragged edge we all are, Adam has to stop with 800m to go to eat. He just can’t pedal any more without extra fuel. 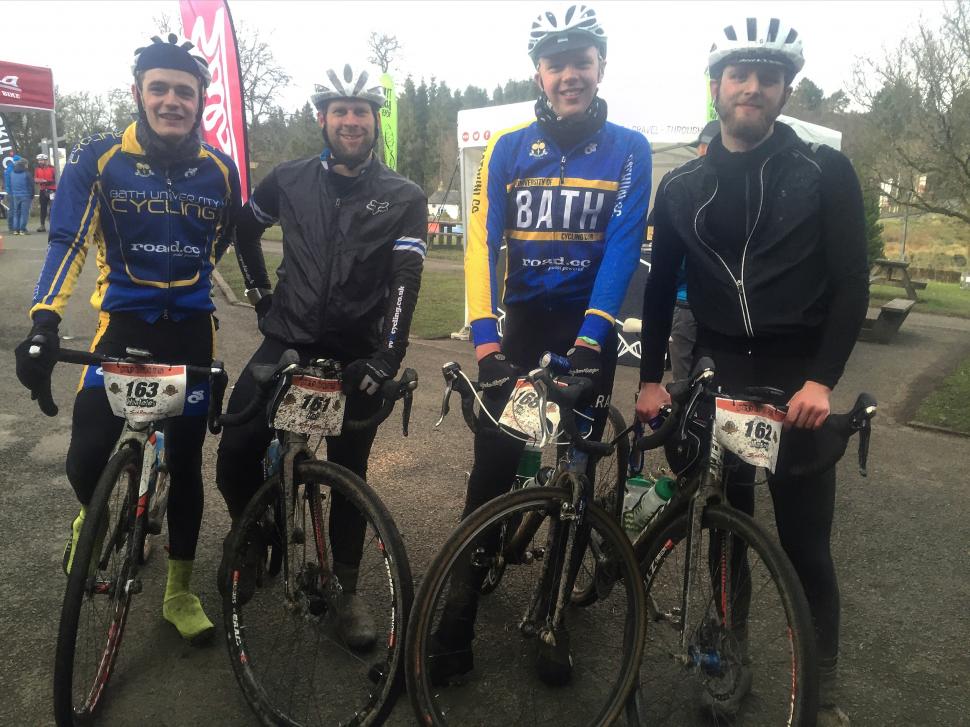 We make it, though. Dibbing in (a ridiculous term) at the final timers tells us we’ve been out riding bikes for 11-and-a-half hours, moving for just under ten. Not long after us people are coming in with their lights on. I’m unconvinced anyone is home.

Adam downs a hot soup faster than I thought possible. James is using his bike as a crutch. I bonk under the portcullis.  There’s nothing left to do but head back to the car, throw my bike in the open boot and sit down in silence once more.

You can see Ed's ride on Strava here