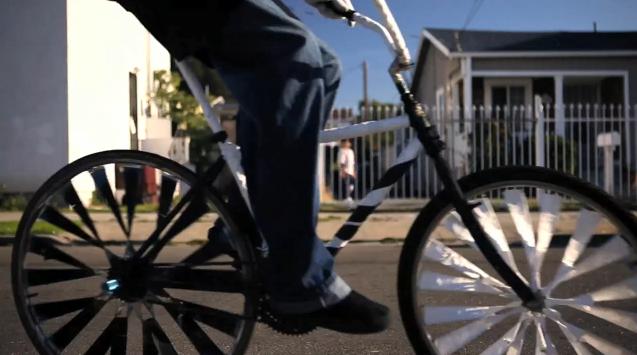 Back in September 2008 road.cc posted an article about a bike customisation movement called scraper bikes which started out in Oakland, California. Street kids who didn't have much money would customize their bicycles, not with trick carbon and titanium hand crafted bits of bike jewellery but by rather more humble means, with sticky tape and craft paper!

I don't think it will catch on in other countries where they don't have the same hot, dry climate of California or what you would end up with is a load of colourful papier mache clogging up your wheels. Well, things have progressed a little since 2008 even if it isn't much more than the quality of the video which has improved. If you are thinking "man, that shit looks dope, I needs to get me some fresh wheels to roll in my hood" etc. you need to abide to these simple rules, laid out by the Scraper Bike King. Come on, you didn't think that you could just get out there and start sticking milk bottle tops and bunting onto your mum's bike and start scraping did you?

Scrapertown from California is a place. on Vimeo.

Unfortunately I am rubbish at riding in a single file so I haven't bothered taping any discarded bits of wrapping paper to my bike. But I do like the fact that you have to have a 3.0 grade average implying that you need to attend school and put some effort in. 10 rides is a bit harsh though so I am pressuming that they do them quite regularly. Plus I can't help thinking that these kids could probably make a few bob putting those Pashley trikes on ebay because they sell for good money over here in the UK and put it toward a proper bike, I mean, a less flammable bike and one with only two wheels. But I still love it. I love the fact that these kids are taking huge pride in their push bikes and decorating them like carnival floats and then parading them around their neihbourhood. It would be great to see something similar, maybe more weather proof, over here in Blighty, especially with the new Bike Clubs starting up all over the country. 'Put a bit of pride on your ride' could be the catch line, now where are those old spokey dokes...?