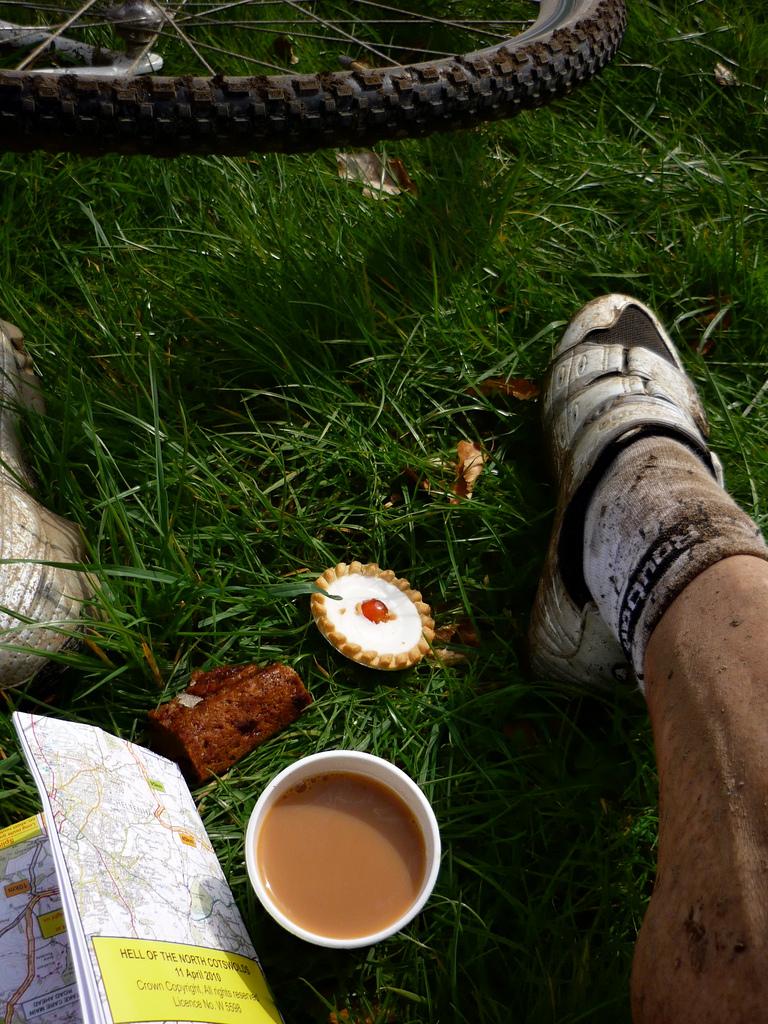 Which is why we do it.

My old friend 'Moose' and I are somewhere on the "Hell Of The North Cotswolds" a good old ride that's become an annual favourite in the hills over a roughly 50/50 mix of road and bridleway known colloquially as the HONC. The event was started 26 years ago by Tim Groom and the late Pat Smith who had ridden the Paris-Roubaix sportive and wanted to bring the flavour of the "Hell of the North" with its famous mix of tarmac and rough cobbled sections to the Cotswolds and hold it on the same day as the Spring classic. Now promoted jointly by Winchcombe CC and Cheltenham & County CC it's not a race, or even a fashionable sportive, it's that old-fashioned notion of a "reliability trial" so your time is recorded for posterity but no-one ever gets a prize for being first, although you can find out who was the fastest rider if that matters to you.

There are 100km and 50km routes on offer, with some tackling the shorter route as a decent challenge while others treat the big loop as a quick sprint before lunch, and with a sneaky bit of mix-and-matching you can do an interim 75km if you're more than man enough for one but not man enough for the other. The route is signposted for the first time this year boringly putting an end to the comedy detours of cycling sheep all following someone who they thought knew where they were going, and the stops at every junction with people all holding route-maps upside-down and pointing different ways, or groups clustering round riders with route-programmed GPS's on their bars. Along the way there's a series of controls with marshals marking your time-card to keep with the reliability vibe and to ensure a lack of course-cutting, not that anyone really seems too bothered, and all the major road crossings are also marshalled, which is nice.

When I did my first HONC about 20 years ago (eek) I turned up with friends on mountainbikes and we were viewed sideways with grumpy suspicion by the rest of the riders who were to a man on cyclo-cross and touring bikes. These days if you rock up on a cyclo-cross bike you’re the one viewed with some sense of incredulity by the mountainbikes that now form the vast bulk of machines, who will all ask how you manage to do it on “that”. Over the years I’ve ridden the HONC on a variety of mountainbikes and a few ‘cross bikes and the latter is the machine of choice, the road sections skip by and the majority of off-road sections are easily bounced along without worry, with the few technical sections an amusing tongue-out eye-rattling challenge rather than a brainless fat-tyred blat. And on a cyclo-cross bike it’s a matter of pride to keep up with the mountainbikes, or even overtake them on the descents and smugly cruise past them on the tarmac like you’re not even trying, just to add to the fun of the day. Which is where we came in.

The ride always has a stiff climb straight out of the start-village of Winchcombe and is an exercise in over 1100 riders being unable to ride in a bunch and struggling uphill, but after the initial stodgy granny-ring log-jam it’s a day’s worth of carefree pedalling around the Cotswold hills. Well, carefree today as this year the weather is kind with Spring showing-off it’s best colours and a week of sunshine and good wind has the off-road sections tacky in places but mostly hardpacked and somewhat thuddy bumpy. Over the years I've seen warm sunny days with thick mud under tyre, trudged round a generally grey and lack-lustre ride, a day of ground so concrete-baked and corrugated that bike parts rattled loose, and a nice day rudely interrupted by a short but fierce hail-storm that stripped skin off exposed flesh and the paint off frames alike and was heavy enough to lie thick like snow on the ground. That was a memorable episode, especially as 15 minutes later we were riding under warm sunshine, through cold slushy puddles.

The HONC is almost worth it for the halfway tea-stop at Guiting Power alone. Legendary for it’s bread pudding that is the size of a Roubaix cobble, well, in memory at least, a memory that will keep you going for the final few miles to it's glorious appearance and sustain you for several miles afterwards. It's a chance to fuel up and sit on the grass outside the school-cum-caff with a cup of tea and a slice of infamous cake and watch the strange mix of riders file through on an equally wonderful eclectic mix of bikes. The box-fresh new rub shoulders with the “I’ve not seen one of those in a while” old, light minimal racy ‘cross bikes are parked alongside hardtail mountainbikes laden with the full complement of accessorised mudguards, computers, lights and mapboards only bested in rolling weight by 6" travel mountainbikes piloted by full-on baggy clothed wearing dudes, who queue for tea uncomfortably next to lycra you thought had worn thin in the 1980s, and probably has.

No matter how many times I do the HONC I forget how secretly hard it always is. With it's incesant up-and-down profile and enough steep and sticky climbs to make thighs throb and always one more needless ascent towards the end to completely rinse the legs the trick is to try and save enough energy to hit the final descent with a whoop, fast and slippy and clattery enough to shake the last of your filings from your teeth as a reward.

This years highlight was not the path through the field that was somehow both bumpy and yet Plasticine soft, nor the loop around the field of loose rock, nor the getting to the bottom of another eyeball-rattling downhill puncture-free and not even the rider that thought he could overtake the line of riders by taking the gutsy line along the horse-hoof rutted verge before crashing over his handlebars, but the trio of young girls selling home-made cakes for 50p a go on the last hill. We thought it rude not to stop and reward their private enterprise, especially as it was their last two pieces of cake.

Despite bluffing otherwise we still sprint for the finish in the afternoon sunshine where we pick up our little medals, merely glance at the time on our certificate because it really doesn't matter, weave our way around bodies prone on the grass, avoid the queue for much needed tea and burgers and pack the car for home where we gently graze our way through bacon sandwiches, bread and ham, pizza and finish off with waffles with chocolate spread for pudding, all washed down with endless cups of tea whilst watching proper riders race the real Hell of the Paris-Roubaix that’s been saved on the digi-box.

We're disgusted when Cancellara attacks as Boonen is sitting up and having some cake. That's not sporting in our book, you've got to stop for cake.

Keep an eye here www.honc.org.uk for news of next years event, it fills up fast now.