I'd know if I hadn't wimped out and changed the wheels...

In the end I cheated, and swapped the wheels.

This was meant to be a blog that said: hey! You can race on a cheap bike, it's okay! And it still kind of is that. But I couldn't help myself.

We have the B'Twin Triban 520 in on test, and I'm riding it. It's £450, with an alloy frame and Sora gears. It's due a full review but first impressions have been very positive. So I got myself to thinking: If you'd bought one, and got the bug, and wanted to start racing, would it do?

It's not the lightest bike, at around 10kg out of the box. Nor, with a 21cm head tube is it the most aero. But it is stiff and responsive when you chuck it about, and everything on it works just fine. So in theory, in a crit race, you should be okay, right? 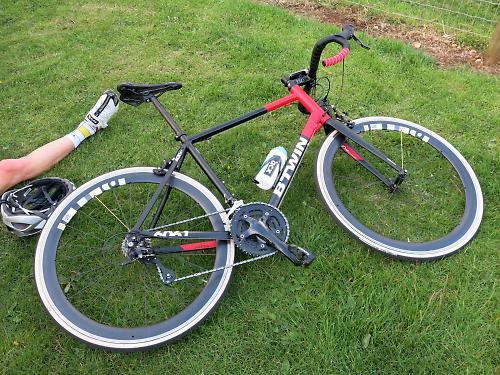 Still, I swapped the wheels. let me attempt to justify that.

There's nothing wrong with the Triban's stock wheels, but they are stock wheels. Probably they're north of 2kg for the set, and when you're trying to pick up speed in a hurry they do blunt the bike's response. And in a crit race round a tight circuit, with two sprints a lap to stay on, that's an issue. Because when you get dropped, that's where it happens.

Imagine you're in a position where you've bought the Triban and you decide to try racing and you think about whether you'd upgrade anything. The wheels would definitely be your first port of call. Maybe you'd throw an extra couple of hundred quid at some Cero AR24s or maybe you'd head off to Planet X for some budget carbon. There's plenty of options without racking up a massive bill.

I didn't buy any wheels: we have a 13 Bikes Intuition knocking about and I thieved the wheels off that. It's a £1,700 bike and the wheels are decent, 50mm section with bladed spokes and a carbon fairing a bit like Mavic Cosmics. They're better than the B'Twin wheels. They're nothing particularly special, though: if you could buy them on their own, I guess they'd be around £400 for a set.

So why change them? Well for three main reasons:

1) they look more pro and they make a cool sound;
2) it's a psychological advantage: you've done something to improve your bike, and therefore your chances;
3) they are actually a bit lighter, and more aero

If I'm honest, the first two are probably as important as number three.

To the race, then. It was windy at Odd Down, quelle surprise, and so a day for hiding in the pack and staying away from the front. I've ridden Odd Down enough times now to be okay at hiding, and I was hiding when a break of six or so riders went off the front. And off the front they stayed, for the remainder of the race. They didn't get far, but it was far enough, and since Bath CC had Ruan up front in the break it wasn't our job to chase. The pack dwindled a bit as a few riders got found out, but stabilised for the second half of the race, and I tried to keep myself nearer the front than the back. But not so near the front that I got exposed. And I didn't think about the bike, really. The gears worked, and the brakes worked. When I pointed it round the hairpins, it made the turns with a minimum of fuss. When I sprinted out of the turns to try and stay on a wheel, It was efficient and stiff. It wasn't so tall that I couldn't duck behind another rider to get some decent shelter. In short: it wasn't the limiting factor. Deep down, we all know that: unless we're a long way over to the right of the training bell curve, the gains we can make in our performance and fitness will easily outweigh the gains we can make by buying better gear. Even with the wheel swap the B'Twin was probably still the cheapest bike in the 3/4s by some margin. There were plenty of wheelsets that would have cost double what the Triban came in at. I'm discounting the on-test £1,200 Garmin Vector pedals for the purposes of this comparison. Let's pretend they were just normal pedals, eh. The ones the Triban came with. it wouldn't have made any difference. I wasn't riding to power. I was riding to stay on. Come the end of the race I was pretty cooked, so instead of holding on for the sprint I thought I'd try and lead out team-mate David for a go at the minor places. I put in a big turn down the back straight and into the wind to the bottom hairpin, then I just ran out of gas. I swung wide to let him through but overdid the swinging wide bit and ended up on the grass, so I cyclocrossed for a bit and then coasted home behind the pack. He did manage to snag 8th place. Probably he'd have got it anyway. What did I learn? That once you're off and racing, often the only thing you really notice about a bike is whether it works or not. Sora gears aren't sexy but they're perfectly functional. The Triban's alloy frame and carbon-bladed fork aren't light, but they're stiff and they track well. Mostly racing is living in the moment. You don't consider whether a bike that's 3kg lighter would help you to stay on a particular wheel. You do as much work as you can, and you either stay on, or you don't.

Being more analytical after the fact, I'd say that I probably found that race the hardest one I've managed to actually compete in. But then, it's my first 3/4 race so that's to be expected: all I've got to compare it to is one 2/3 race where I got my ass handed to me in short order, and some 4s-only races that were slower, in better conditions. Without going back and doing the same race again on a different bike, it's hard to know how much objective difference it makes. Odd Down is relatively flat; you wouldn't want to do a hilly road race on the Triban. But it is raceable, in a race like Odd Down. It's an enjoyable bike to ride, even in a race where you're clearly not meant to be having any fun. Probably you'd be okay even on the stock wheels. I'll never know now, unless I try again... 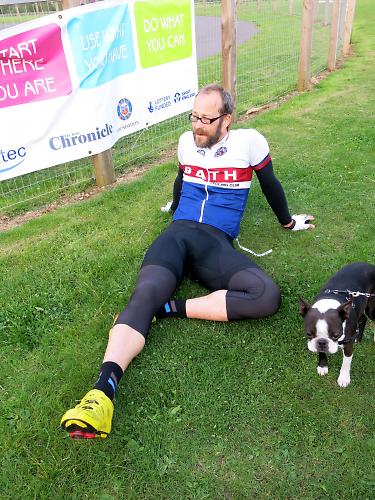