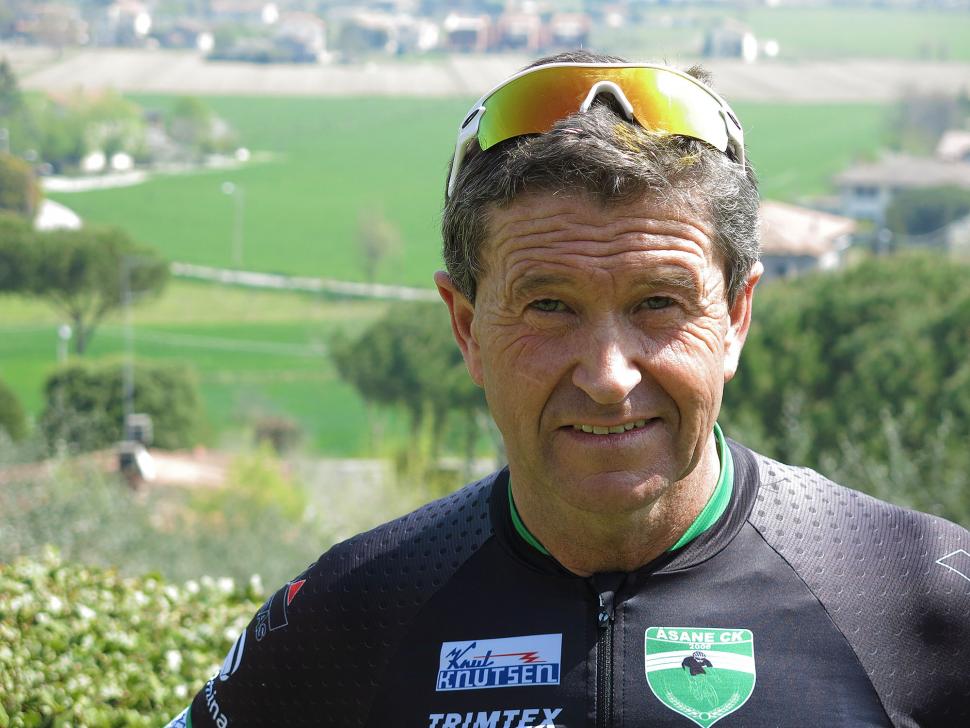 Frank - headshot
The people you meet on a cycling holiday; some are not quite who they seem...

It's fun coming to the Hotel Belvedere, and one of the reasons it's fun is because you get to ride with new people. People like Frank.

I spent the first day trying to stay with Frank and fellow Norwegian Øystein on the climbs on day one. And failing, mostly. He's an unassuming guy, it turns out he's 59 though you wouldn't know it. You wouldn't know he was the Norwegian road race champion for his age group, either. But there he is, wearing the champion's jersey and a medal. He laughs when I show him the pic. "Now I have to wear that jersey at every race. I'm a marked man."

I rode with (and got dropped by) Frank again today on a lovely-but-tough loop round the back of San Marino. And I had a chat with him at the Belvedere barbecue to find out a bit more of his story. 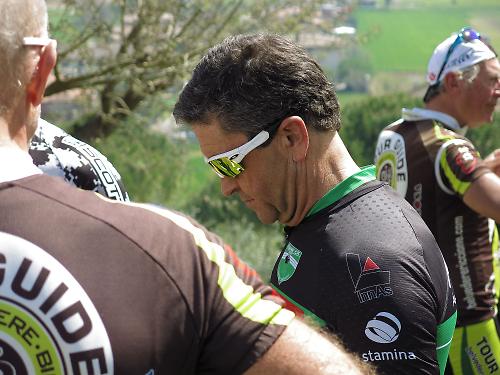 Have you always been a cyclist?

No, I only got into cycling about ten years ago. Before that I played football, and handball. In my youth I played football for Molde, in the Norwegian first division, and third division handball in the winter. But then I got a family, two, three, four children and it was difficult to combine the training with family time. Then I started to jog, and run, hill runs.

In the end I damaged my knees, I've had two operations on one and one on the other. And the doctor said to me, "Frank, you have to stop, and do something else". "And what should that be?", I asked him. He suggested swimming, or cycling. I was 49 at the time. I'm no good at swimming, so in 2005 I started to cycle to work, 20km each way.

Someone suggested I try the local Gran Fondo, the Bergen-Voss. It's 165km. So I borrowed a bike, punctured two or three times and took nearly eight hours that first time. And I said to myself, "Next year..." And last year I was in the top ten, I finished in 4 hours and 13 minutes. How did you make the leap into racing?

Somebody said to me, "You should join a club, try a competition". And the first competition was a criterium race and I was really disappointed because they took me out after a few laps, I wasn't fast enough. But again, I said to myself: okay, I'll train more. It took me two or three years before I was at a high enough level that I could really compete.

The last five years I've been racing in the Masters Cup in Norway, I've come third, second, first in my class. The Norwegian national team took me to compete in the Nordic championships. But I'd never had any success in the Norwegian championships, so I prepared especially for that last year, and I ended up winning the road race and coming second in the time trial. So I do both now. And what's next for you?

We're travelling home on Saturday, that's my only rest day. And Sunday is the first time trial in the Masters Cup, and it continues to the middle of September. This is the last chance I have to get some training in before the season starts.

I do about four Gran Fondos in a year, and the rest of the time it's races. I've been to Italy, Slovenia, Denmark for Gran Fondos. The Gran Fondo in Copenhagen this year is a qualifying race for the World Championships, which are also in Denmark. The World Championships are my target for this year. Last year I came 22nd; I was in the front group with 5km to go but there were some crashes. I saw that it was possible. But first I have to qualify!

This is my last year in the class I'm in. Next year I move up an age group. Will it get any easier then? You'd hope so! But there are always new people to beat.

It really encouraged me that in the local club there are many people who have started late with cycling. For myself, I've been training since I was seven or eight years old, so I knew I had a good level of fitness but it's learning the specifics, the techniques. Many people have asked me, how do you do it? What's important? In cycling, you need to train, yes. But so much of it is in your head. Like the hills: I'm not the strongest in the hills but if I have a wheel in front of me and I decide to stay on... a lot of it is will power!