SR series 2/4: Back to Bergholt

Back to Bergholt
A 300km ride across Southern Britain. Here's how it went.

I'm attempting a Super Randonneur series this year: 200km, 300km, 400km and 600km rides in a calendar year. Easter weekend was the second leg, with a solo effort across plenty of Southern Britain back to my folks' house in East Bergholt. Here's a diary of events... 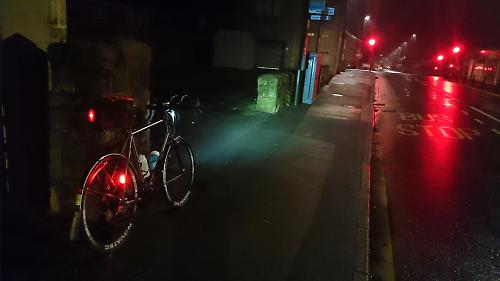 4am: Wake up, scoff a banana, hastily put on cycling gear and wheel already-packed bike out of the drive. Set off. Get 4km down the road, glance at Garmin, realise I've accidentally set my alarm an hour early. I was going to set off at five. Ho hum. At least there's a tailwind.

6am: The mist has become light rain. It's not warm out. My mid-season gloves are looking like they might possibly be a season short of ideal. I check my fingers, some of them appear to be missing.

9am: Three hours of wet, cold, riding later I'm at a pretty low ebb, and it's not helped by a puncture 5km out from what was meant to be my first stop. It takes five minutes of blowing into my hands to get them to a point where they're capable of removing the tyre. I'm reminded why I like tubeless at this point. Wrestle a new tube in, try to gun it with CO2, the head pops off and the gas adds infintesimally to global warming instead of getting me back on the road. Do some swears. 9.15am: Attempt to pump up tube but pump doesn't appear to be working. Do some more swears, rip the pump off the tube and break the valve in the process. Almost throw pump in hedge. Remove broken tube, patch up punctured tube, strip down pump and pour some water in it to create a seal (it appears to be low on grease inside), pump up tyre, set off gingerly avoiding road debris for a bit, until I forget.

9.30am: Make it to my brother-in-law's house where he feeds me copious amounts of tea and muffins and cookies, and I dry my gloves by wringing them in a towel. It's stopped raining. I'm 117km in. It feels like my luck is improving.

11am: The Garmin ticks over to 150km, I'm somewhere in the Chilterns. It's amazingly flat, most of Southern Britain. 6km in I had to winch myself up Winsley Hill on the way to Bradford-on-Avon. I clicked up to the big ring after that. I'm still in it. I've become a bit bloody-minded about it.

11:30am Defeated by Hale Road out the back of Wendover, and its 14% section. The big ring charge is over after 156km. 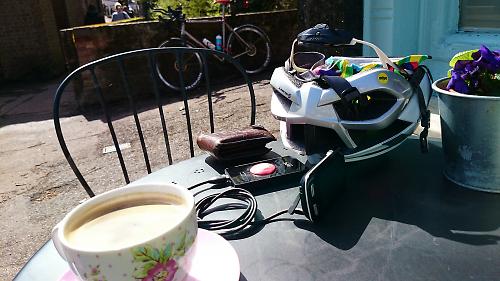 1pm: Lunch in Wheathampsted (198km), chilli bean soup and a big mug of coffee in a roadside cafe. Just the ticket. The sun's out, it's a very different day to seven hours ago battling across Wiltshire in the pouring rain. That's one of the joys of a long ride. The Garmin's on charge and the phone is next; nine hours is a pretty good innings for the Edge 1000. It'll get home on this next charge. I've rigged up a Heath-Robinson battery mount with some Sugru and magnets but the Garmin won't charge when it's straight because the lead gets pushed out of the socket. So I have to do a couple of hours following the route at an angle.

4pm: I've made it to the Essex border and psychologically I know I can make it back from there barring some kind of total mechanical or physical failure. I've been saying the distance to go out loud, counting down. Seventy Five Kilometres to go. Seventy Four. Seventy Three. Deep down I know it'll be more than 300km, because it always, always is. At 230km I swap the distance field on the Garmin out for something else so I'm not fixated by it. I'm spending a lot of time on the aero bars now, just trying to bash out the miles. I'm glad I fitted them. 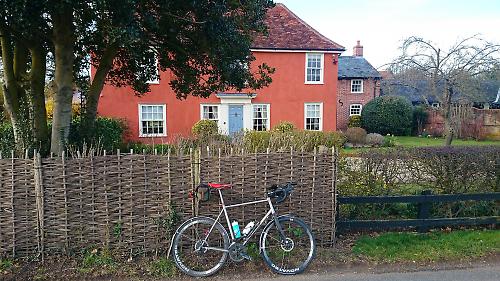 5.30pm: 300km is up. I'm not home, but then I'd resigned myself to that. The last leg along the River Stour is beautiful, from Bures to Stoke-by-Nayland along empty lanes in the afternoon sunshine. After the last climb to Stoke, which I do in the big ring just because, It's downhill the the A12 and a wander through the village with a last kick up Rectory Hill to finish.

6.10pm: Final destination: Flatford Lane. 317km. Just under twelve and a half hours in the saddle with two hours of stops. Now to eat all the things, all weekend. 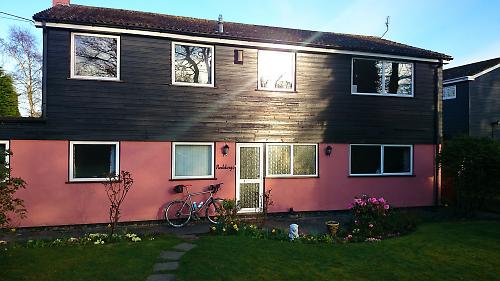