It has been a fairly eventful winter for cycling in terms of sponsors changing and new bikes and kits coming on the scene.

This website has been right at the forefront of the action by allowing its readership to help choose the new Planet-X/Road.cc team kit for 2010. There is also a new Road.cc jersey in the pipeline too.

And despite a core of people who inhabit cycling message boards snobbily saying that it is degrading for someone to ride a replica team bike or wear replica team kit, I think a bit of fashion analysis is what this website needs on a Friday lunchtime.
So here goes. The styleometer has a maximum of 100% points. 50 for both the bike and the kit. Ag2r-La Mondiale
Bikes has changed from BH to Kuota and they are nice looking. The kit changed mid way through last season to white, light blue and brown. It’s a ‘marmite’ moment, you either love it or hate it… I love it! Astana
Trek departed with Mr Armstrong and his cronies so Spesh have come to the rescue. The bikes are ok, nothing special. The kit on the other hand has been widely compared to the sugar filled chewy ‘treat’ that is the Refresher.

Stylometer percentage 50% (all for the bike) Caisse d'Epargne
Yawn! The bike is a work of art and gets top points. The jersey is ok but hasn’t changed in years and the pattern looks like they have tried to get a carbon fibre effect. It doesn’t work.

Euskaltel-Euskadi
As I ride and Euskatel painted Orbea in the winter I suppose I have to go big on the bike. It is nice looking but doesn’t make you go “wow”. The Kit was distinctive and fresh… in 2003. Bit boring now and could do with a refresh.

FDJ is an example of a barely changed kit working (unlike above). The jersey is wonderfully simple and the look goes beautifully with the patriotic red white and blue La Pierre bikes. Always one of the best turned out squads. 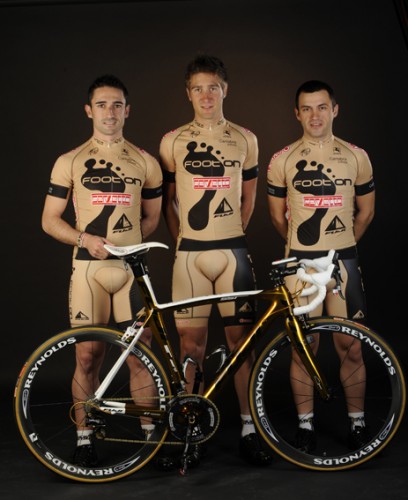 Footon-Servetto-Fuji
Oh my. The bike is a bit garish but that wont be the thing your eyes are drawn to. The kit has certainly been the most talked about of the season. What’s not to love about a flesh coloured kit with a bit black foot printed on it?

Well plenty as it happens. I am not a big fan and when you compare it against some of the true classic jersey’s over time (I am talking MG/Technogym and Casino) then it is nowhere.

Garmin-Transitions Slipstream
When the argyle thing first happened and Jonathan Vaughters was talking about “cycling as the new golf” I liked it. But you cant go half and half. The road.cc one works because it is all argyle, the Garmin one fails as it is neither patterned nor plain.
Not the worst, but not the best. The bike is a bit ‘meh’… nothing to get excited about. Lampre-Farnese Vini
The distinctive rear end of the Wilier bike (you could only get away with saying that in cycling context!!!) makes this ensemble for me. The jersey has altered slightly but still suffers from being pink and purple. Liquigas-Doimo
I would walk 100 miles barefooted over broken glass to own a Cannondale bike, but not a lime green one. Jersey is abysmal. All points scored here are for the bike. Quick Step
A real front runner this one! Eddy Merckx bikes make a re-appearance in the top end of the peloton. It looks a lovely effort but is still over shadowed by the wonderful new retro style jersey. Blue with a white band and a bit of red trim, it is virtually identical to the special cobbled classics kit they were denied from wearing last April. Rabobank
Giant bike is plain white but looks ok (apart from when Robert Gesink is falling off his). Jersey has evolved over the years rather than changed. I am neutral on this one, neither love nor hate it. Omega Pharma-Lotto
This one looks a total mess. I have never been a fan of Lotto kits (apart from the red and black halved one that Andrei Tchmil rode to victory in that snowy 1994 Paris-Roubaix) and this is no different.

The bike on the other hand is a Canyon. Plain white like the Giant but for some reason it looks much nicer. Team HTC-Columbia High Road
After the lovely blue effort of the 2nd half of 2008 the re-hashed Saunier Duval outfit for 2009 didn’t look great. Add in the lime parts from the Tour onwards and things don’t look great.

The bike on the other hand is lovely despite all the stickers on it. Could do much better would be my comment.

Team Katusha
This one is a grower on me and it definitely looks better this season with the blue sleeves. Ridley bikes are cool (fact!) and the whole package looks very stylish indeed.

Team Milram
Where to start on this shocker? How about the bike, I can say something about the Focus. It looks ok and I love coloured break hood covers (having celeste ones over the Campag levers on my Bianchi).

The jersey is a cow print effect, I think that says it all.

Team RadioShack
The Shack has a bit of red and grey on their jersey and a multitude of different coloured Trek machines for its riders. I don’t like Trek bikes so points lost there. The jersey is ok, I don’t mind it compared to say the Astana one. So in terms of the war between Armstrong and Contador, the Texan is ahead on fashion.

Team Saxo Bank
Without the Cervelo bikes this team loses a bit of kudos for me. The jersey is run of the mill and the Specialized bike is only nice looking. But somehow put together it all works and the combined mark is more than the sum of the parts (if that makes sense). Team Sky
New kids on the block and one of the best turned out teams in procycling history. The jersey is plain and simple black with a blue band. I wasn’t taken at first but it is a grower and everytime I see it I think I looks better and better.

What more can you say about the Pinarello’s? A lovely bike and the only mark I can take off them for aesthetics is the use of Shimano over Campag.