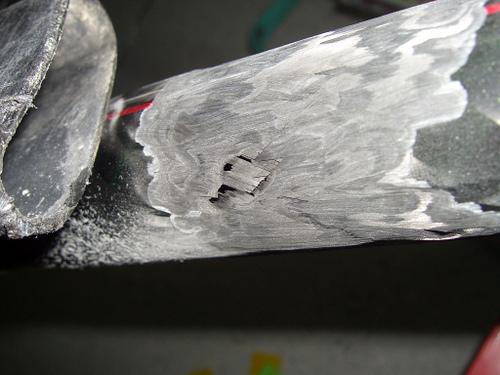 You've binned your fancy Carbon road frame after an argument with a car and the 'bars have gone through the top tube. It's a bit of a mess, and it's not covered under your warranty. So that's that, right? Well, not quite.

Enter Polytube cycles. Okay they're not particularly handy for the average UK rider, based as they are not far from Düsseldorf, but the startup Carbon frame builders have been on a voyage of discovery in their quest to create their frames, and one of the things they seem to have learnt is that the terminal damage isn't always terminal, even if it's fairly severe.

The frame in question, a Focus, was pretty badly damaged. "From the outside you could already see three different types of damage.", says the Ploytube blog. "The fibers were broken, the matrix was broken parallel to the fiber direction and there was some delamination. The top layer of fibers was separating from the underlying layers". But all is not lost.

After cleaning up the wound a matrix of short fibres is added to stregthen the structure, then the hole is patched. Carbon frames are formed in a mould at high pressure and obviously that's not an option for repairs, but Polytube apply pressure with a wrap of special tape, which is perforated to allow the excess epoxy to escape. Polytube's 'signature' finish is an Aramid layer which adds a bit of resilience to the frame, and it's job done.

There's no word so far on their blog about how the bike's ride has changed as a result of the repair but it's interesting to see, in our throwaway society, that Carbon frames can be patched up and their life extended. As to what the manufacturers will think... well, we're guessing it'll invalidate your warranty but if you're looking at this as a solution you've no doubt already been down that road.

And is it safe to ride? Well, provided that you're happy the person doing the repairing knows their onions we can't see how it's any different to getting your steel bike mended. With the proliferation of Carbon frames further and further down the price ladder, will we see more repair houses springing up, or will the lower cost of a replacement mean that it's not really viable for most people? Time will tell. Assuming you're shelling out a grand for your frame, a repair could be your best bet in a spill... any road.cc readers had any experience of getting a Carbon frame fixed?