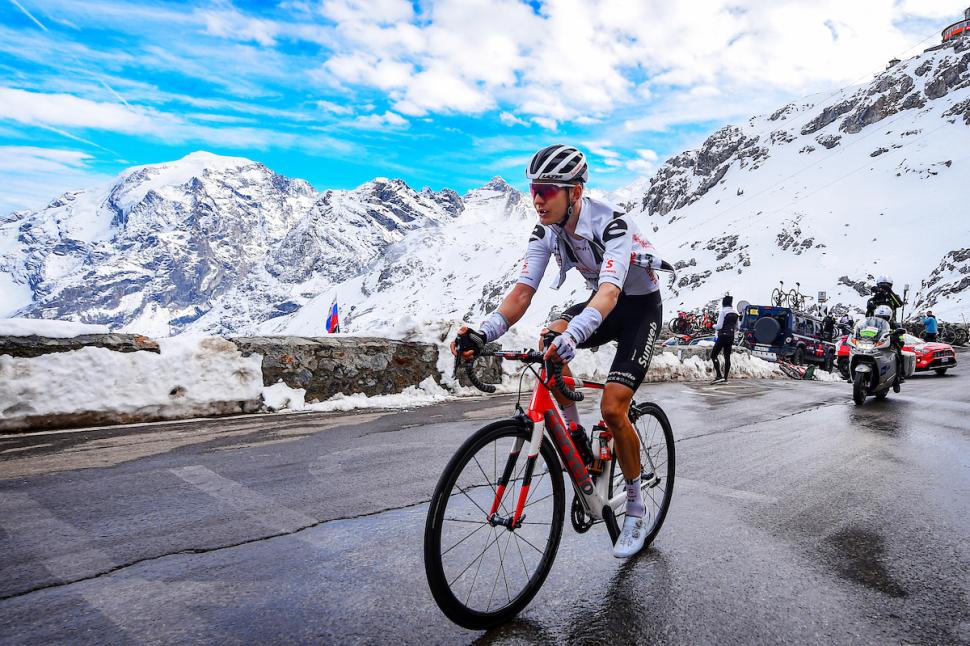 If you were watching the Giro earlier then you’d have been captivated by some quality zip action. Jai Hindley could barely get a Castelli jacket on and failed to close the jacket before the freezing descent while his teammate Wilco Kelderman suffered from the cold, losing time to the same issue with his Craft jacket.

Let’s set the scene. You’re 1.5km from the top of the Stelvio, a brute of a climb in the Italian Alps. It’s October and there is snow all around you. To say that it’s a tad chilly is an understatement and you’re about to fly downhill, touching 100kph for upwards of 20 minutes. What you need is a nice warm jacket to fend off hypothermia and keep you in race shape for the final climb of the day.

The Ineos duo of Rohan Dennis and Tao Geoghagen Hart have donned their jackets a few hundred metres before you see your soigneur at the side of the road holding yours.

The @TeamSunweb rider was lucky to stay on his bike at one point! 😱 pic.twitter.com/XjUK90GeHj

You grab it and get your left arm in, but race fatigue and the cold have given you the dexterity of a hippo and try as you might, the jacket just isn’t going on.

For a good kilometre of climbing, you try to balance going full gas to stay with the Ineos riders and finessing a very cold right arm into your jacket. Finally, after you nearly ride into a wall, it’s on. Lovely. Time to zip up and prepare to focus on just how cold your sweaty head is getting on the descent.

But hang on, the zip on your jacket just won’t come together. There are a few hundred meters left of the climb to get it sorted and to stop to do it up would risk allowing an un-closable gap to open. Remember, you’re on the limit already and your main rival has a teammate with him while you’re all alone. Closing that gap is going to be a big ask and you don’t want to break your climbing rhythm. The crest will allow you the chance to freewheel and get the jacket closed.

But the top of the climb is windy and the zip still won’t come together. Poor old Jai Hindley faced this situation during today’s Giro stage and he was forced to endure a long descent off the Stelvio with freezing air slamming into his chest.

His teammate, Wilco Kelderman managed to get his jacket on without too much trouble, but he faced the same problems with his zip. Both Sunweb riders were left to get far colder on that descent than should have been the case, so could there be a case for a slightly redesigned jacket that riders could take before a descent.

EuroSport commentator Brian Smith was quick to point out that when he was racing, the jacket was fastened by velcro on the front, avoiding the zip issues.

The negative effects of getting so cold were seen in the time that Kelderman lost just after the descent. He went from only 48 seconds down to well over 1 minute 40 seconds down and, though briefly rallying, finished the day 2 minutes 18 seconds adrift, his lead cut to a mere 12 seconds.

Reports of Sunweb riders in the Vuelta having the same issues with their zips have not helped Craft’s reputation. But with Hindley in a Castelli jacket provided by the race for being the best young rider, this could just be a case of bad luck rather than a manufacturing blunder. Thankfully for the riders in Spain, the real racing hadn’t yet begun, so they were able to stop briefly to sort the issue.

Who knew that a zip would potentially decide the outcome of the Giro d’Italia.