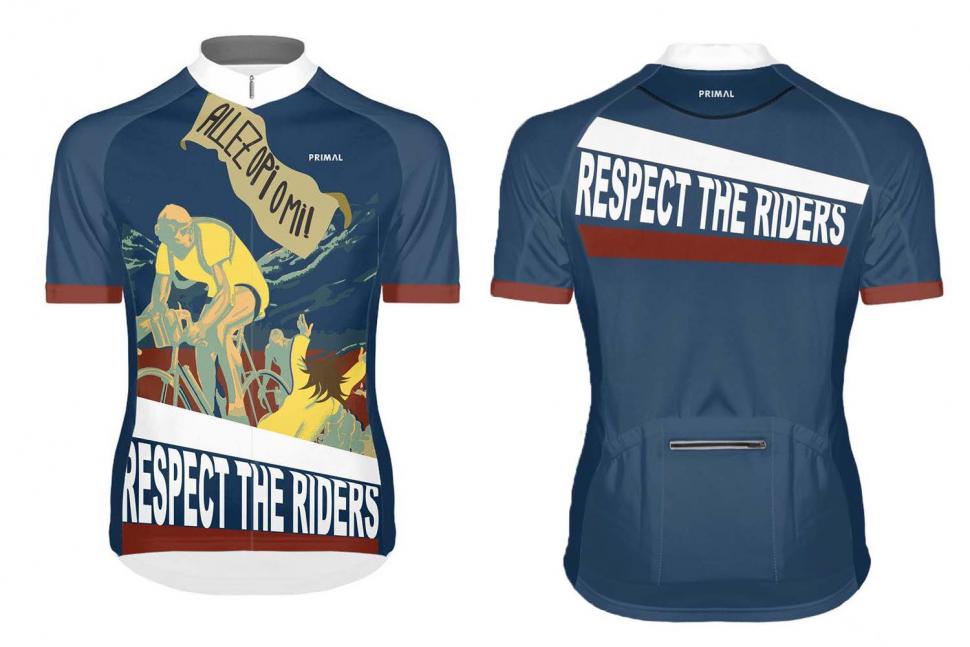 The jersey, inspired by the huge crash on stage 1 of this year's Tour, features a message about rider safety
by Liam Cahill

Never one to miss an opportunity, Primal has launched a jersey inspired by the incident that marred stage 1 of the 2021 Tour de France.

The Allez Opi-Omi jersey also carries a message about respecting the riders with Primal saying “whether you're at a major cycling event or a local bike race, respect the riders.”

If you missed what happened and thus have no idea what Allez Opi-Omi is all about then let us explain.

The 2021 Tour de France was racing towards the finish of stage 1. As the riders entered the final portion of the race on narrow roads, Jumbo Visma rider Tony Martin was moving up the right-hand side of the tightly-packed bunch with his teammates in his wheel.

A spectator, paying no attention to the race itself, leaned into the road with a cardboard sign that read Allez Opi-Omi. With nowhere else to go, Martin collided with the spectator and crashed, bringing down half of the peloton with him. There were many broken bikes and even more broken riders.

In the post-crash confusion, the spectator slipped away but after attracting the attention of the world’s media, later turned herself in to the police.

Obviously, the spectator did not intend to cause the crash, she simply wanted to say hi to her grandparents through the medium of the cardboard sign, but the incident raised, yet again, the issue of spectators getting too close to the riders.

While many within the race and fans on social media suggested punishments ranging from fines to jail time, any notion of legal action from the organisers of the Tour against the spectator was dropped.

The jersey is available now in men’s and women’s cuts for £65.