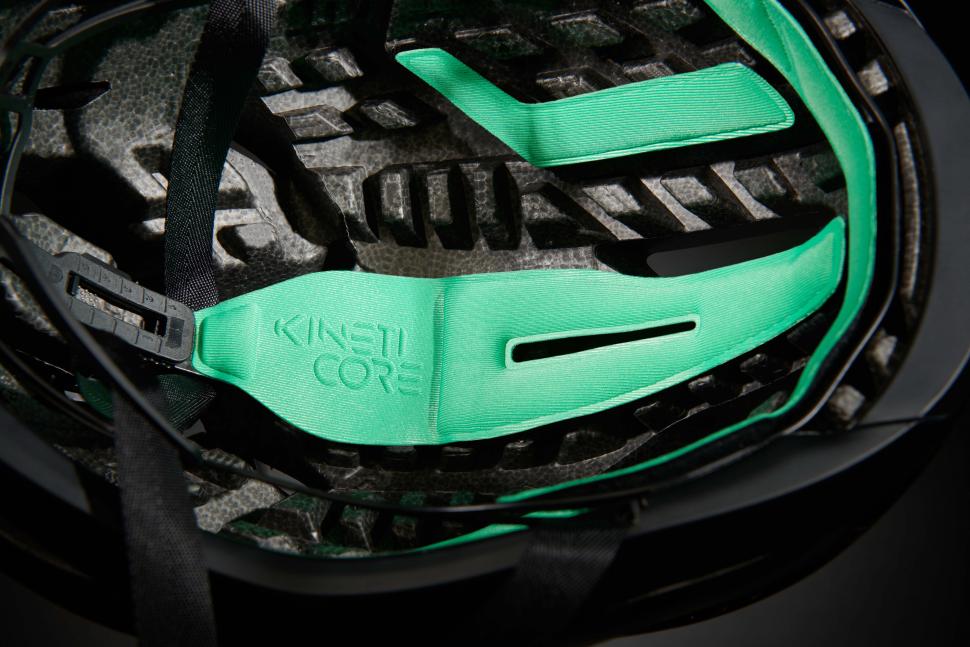 Promising no weight or cooling compromises, the new KinetiCore safety technology is built into the core of six Lazer helmets, with 'controlled crumple zones' for protection
by Anna Marie Hughes

Lazer has revealed its new proprietary KinetiCore technology on six of its helmets, with unique controlled crumple zones that are designed to protect against rotational impacts. It's also the first technology on the market that achieves this while being directly integrated into the EPS of the helmet itself, with Lazer claiming this makes it more protective and lighter with improved airflow. It also uses less plastic than previous helmets without KinetiCore due to the strategic pattern to allow for crumple zones for bonus environmental points. 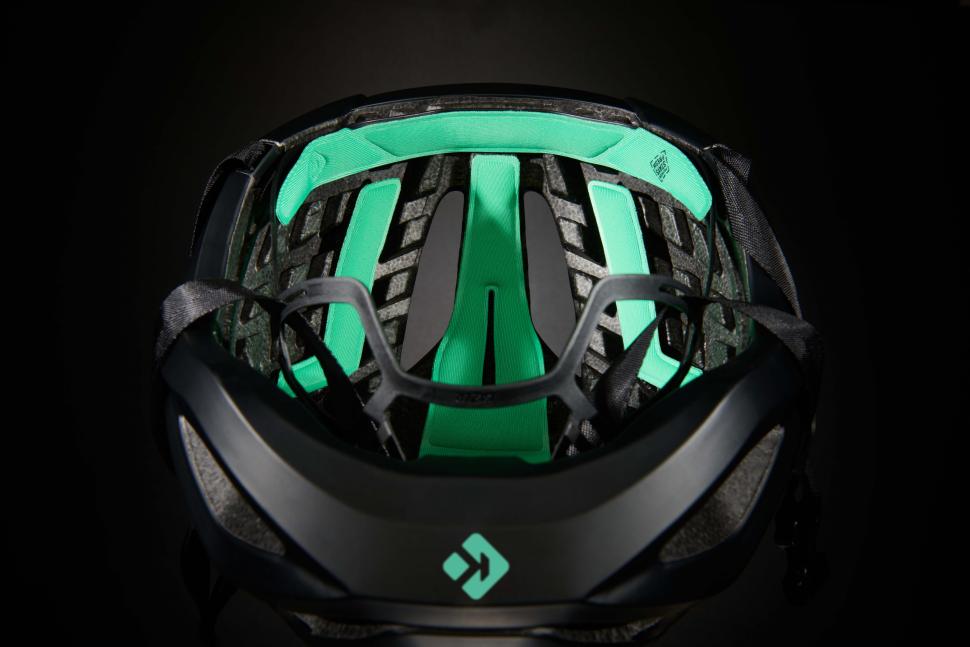 Today Lazer is revealing its new KinetiCore technology across six new helmets, and not all of them are top-of-the-range: the top aero Vento, mid-range Strada and urban CityZen as well as two kids helmets (P’Nut and Nutz) and a MTB lid will all have the new tech included.

The Belgium-based company has been working for over a decade to create the new technology that is designed to offer “next-level brain protection”, without any compromises on performance. Lazer claims KinetiCore is, “a new benchmark for lightweight, protective helmets that are available for every type of rider.”

Previously MIPS has dominated the market for protecting against rotational impacts, with its low friction layer that allows 10-15mm of relative motion between the helmet and the head in all directions. Lazer is not the first brand that has attempted to compete with MIPS though; in 2019 Bontrager brought out its WaveCell technology, however a number of our reviewers have commented that helmets featuring WaveCell were heavy, lacking ventilation or both.

Lazer explains that it began by assessing how different types of impact affect cyclists, using advanced simulations to examine what happens to riders’ skulls and brains in the event of direct and rotational impacts. “The breakthrough moment came when the team examined cars’ crumple zones,” says Lazer. “This inspired them to build cone-like crumple zones on the inside of the helmet, designed to break under impact and dissipate energy away from the cyclist’s skull.” KinetiCore consists of these ‘controlled crumple zones”, which are a set of EPS foam blocks built into the helmet designed to buckle in the event of direct and rotational impact, redirecting energy away from the brain.

“They are individual but work together synchronously to cushion your head from impact,” says Lazer. If just one block is broken, Lazer says you can visually see that the helmet needs replacing.

With the advanced protection technology built into the helmet rather than added on, Lazer says no compromises have had to be made.

Lazer explains that it has been able to design each helmet to its own specification, which means it can increase ventilation and improve airflow. As KinetiCore is integrated into the helmet it reduces the overall weight too, and less plastic is used in the construction compared to previous models.

The Vento KinetiCore is Lazer’s latest premium aero lid, taking over from the Bullet 2.0 MIPS. 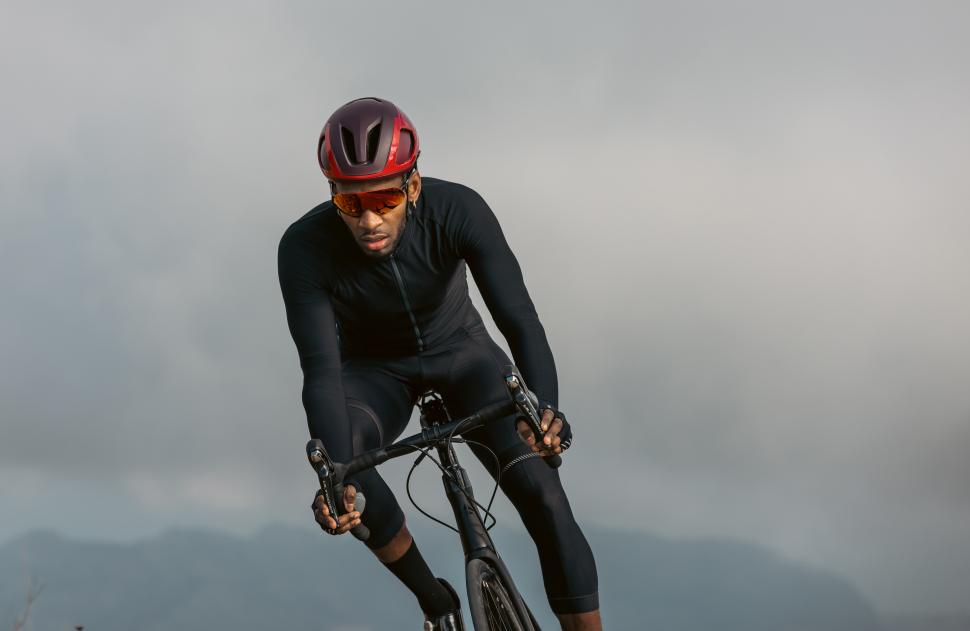 Lazer says it has reduced the frontal surface and drag when the Vento KinetiCore is in a 15 degree sprint position, increasing the aerodynamic performance by a claimed 2.3% compared to the Bullet 2.0 MIPS.

The Venturi ventilation system with large inlets and smaller outlets, according to Lazer, draws air in where it’s needed most, providing a claimed 5.4% increase in cooling efficiency over the Bullet 2.0 MIPS (no lens). As the protection system is built into the helmet, Lazer has been able to make the Vento KinetiCore both lighter than the previous MIPS Bullet 2.0, by 90g so, and also 70g lighter than the non-MIPS one.

This also means Lazer has used 90g less plastic than it did for the Bullet 2.0 MIPS and 70g less than the Bullet 2.0, which offers some bonus environmental benefits to using the built-in technology too. The Vento KinetiCore weighs in at 290g for the size medium.

For comfort, the floating head band is designed to eliminate potential pressure points from the front of the helmet, as well as aid ventilation.

The retention system is Lazer’s 'Scrollsys' system, which it says has been placed in the optimal aerodynamic position at the back of the lid to improve overall performance. The Scrollsys system adjusts around the entire circumference of the head for a comfortable fit and is said to be ponytail friendly. It has also been designed to be used on the go with just one hand.

Eyewear docking pads have been included for keeping eyewear safe and secure when you're not wearing them on rides.

The Vento KinetiCore is also compatible with Lazer’s new universal 40 lumen LED rear light (£29.99) that can be attached to the rear of the helmet. With a braking sensor built in, the light will start flashing when you slow down to alert other road users. 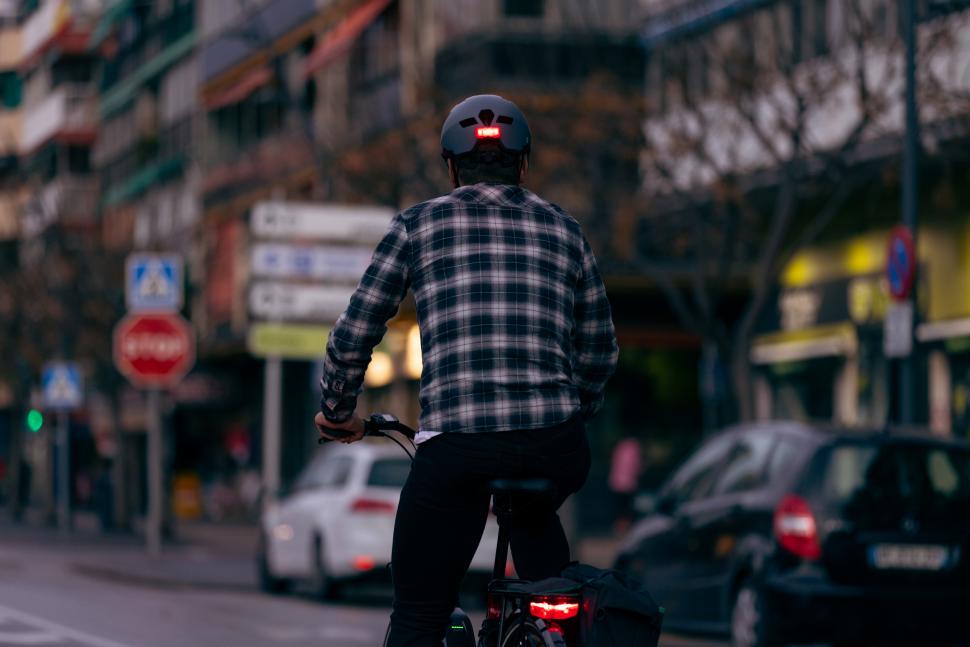 The Strada is Lazer’s all-round performance helmet, and includes the KinetiCore technology at a much more accessible £99.99 price point. Like the Vento, it receives Virginia Tech’s 5-star rating thanks to KinetiCore’s protection against direct and rotational impacts. 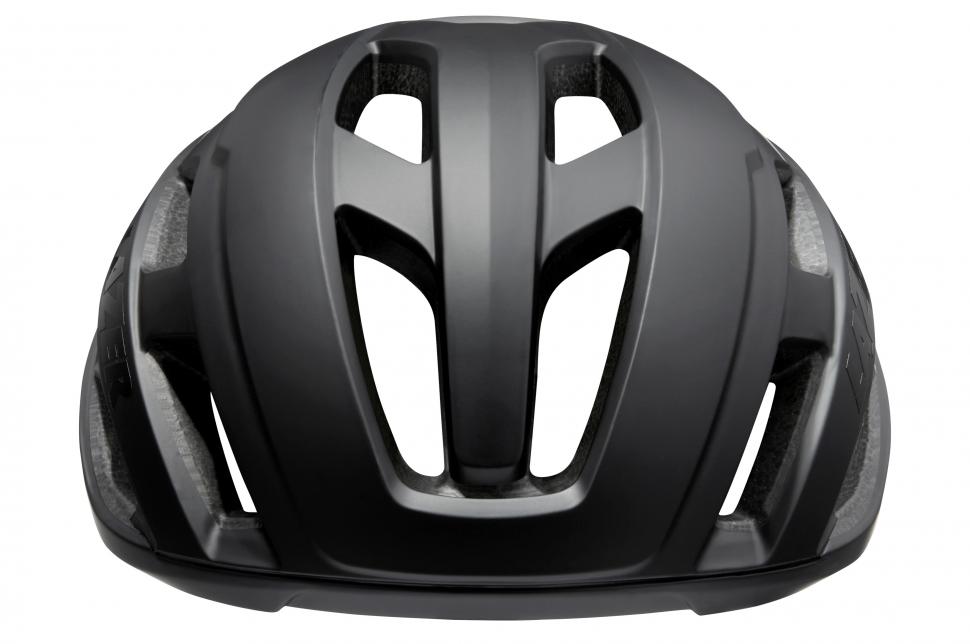 Lazer has trickled down quite a lot of the technology seen in the Vento, including the floating head band for comfort and ventilation, the Scrollsys 360 degree retention system for a secure and comfy fit, compatibility with Lazer’s rear LED for visibility and a design that allows you to securely stow your eyewear when not in use.

While this is not the brand’s aero helmet, the Strada is compatible with Lazer’s aeroshell (for an extra £19.99) which covers the lid for increased aerodynamic protection as well as defence from the elements. It’s available in a slick matte black or hi-viz flash yellow. The cooling and low benefits of the Strada aren’t as big as on the Vento, but improvements have still been made along with the added protection.

The Venturi ventilation system is claimed to provide a 0.9% increase in cooling efficiency over the Blade+ MIPS.

The Strada is 20g lighter than the Blade+ MIPS and is the same weight as the Blade+ with its 290g weight in the size medium.

The CityZen is Lazer’s commuter urban helmet and it receives a 4-star Virginia Tech rating, which is the highest score a hard shell helmet has obtained. The idea with hard shell helmets is that they are robust and can deal with day-to-day knocks and drops better than road helmets, which makes them better suited to commuting. 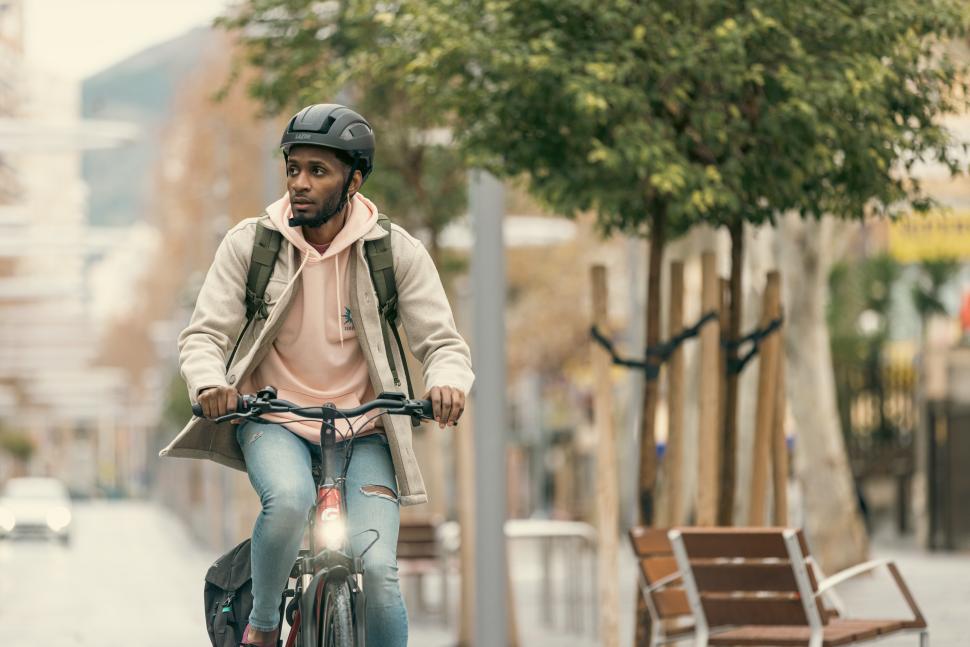 Along with the cylindrical blocks of Lazer’s KinetiCore for protection, the ABS outer shell of the CityZen is made from the same materials used in police riot shields. The front vent and side wings have also been cut to optimise flexibility in the event of a crash. 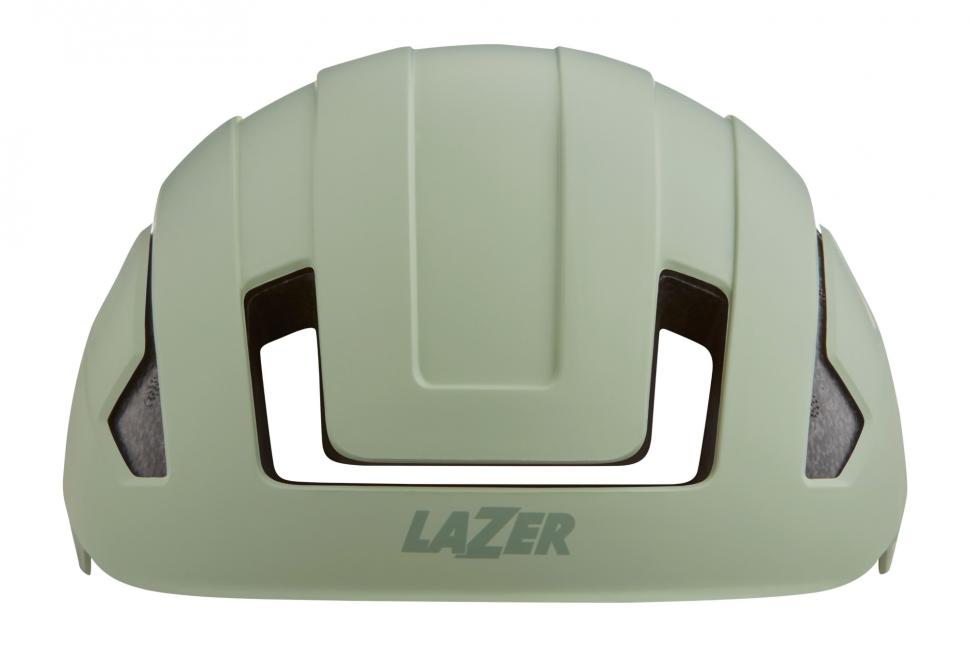 Lazer is offering this helmet in a larger size range than a lot of urban helmets, with four sizes available to make it easier to find the best fit for protection and comfort.

Instead of the performance Scrollysys system, the 'Turnsys' system is used and provides an affirming ‘click’ sound when adjusting. 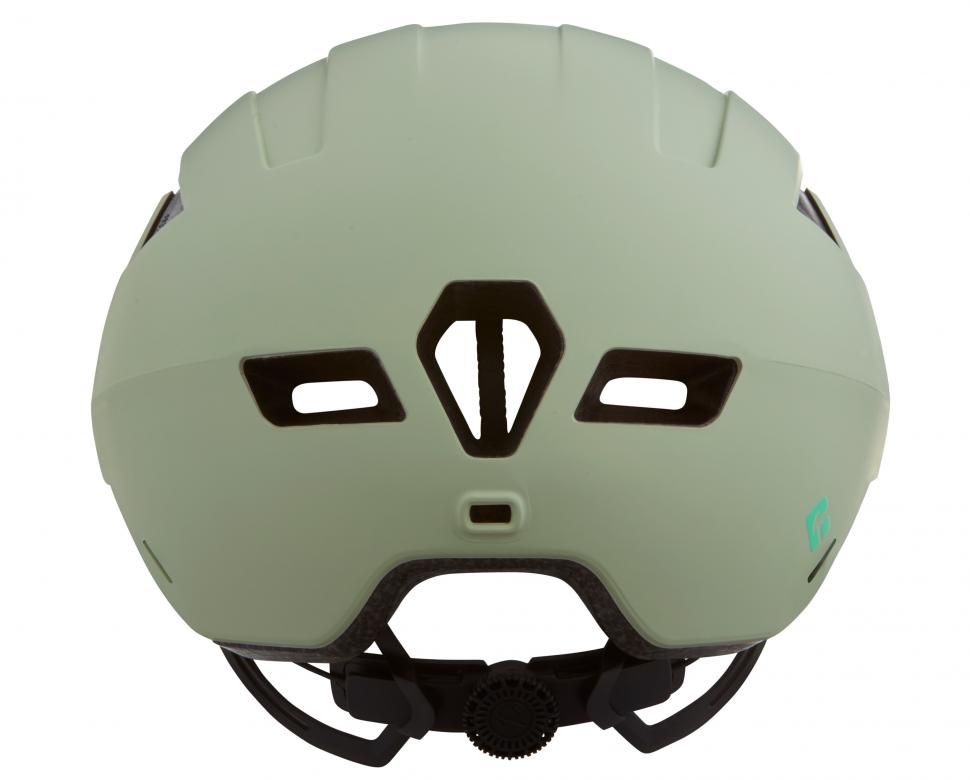 Usefully, you can leave this helmet locked to your bike though the helmet lock hole for convenience.

Does Lazer's KinetiCore technology for improved protection really come without any performance compromises? We have a Vento in for review, so will be sharing our thoughts on this soon...