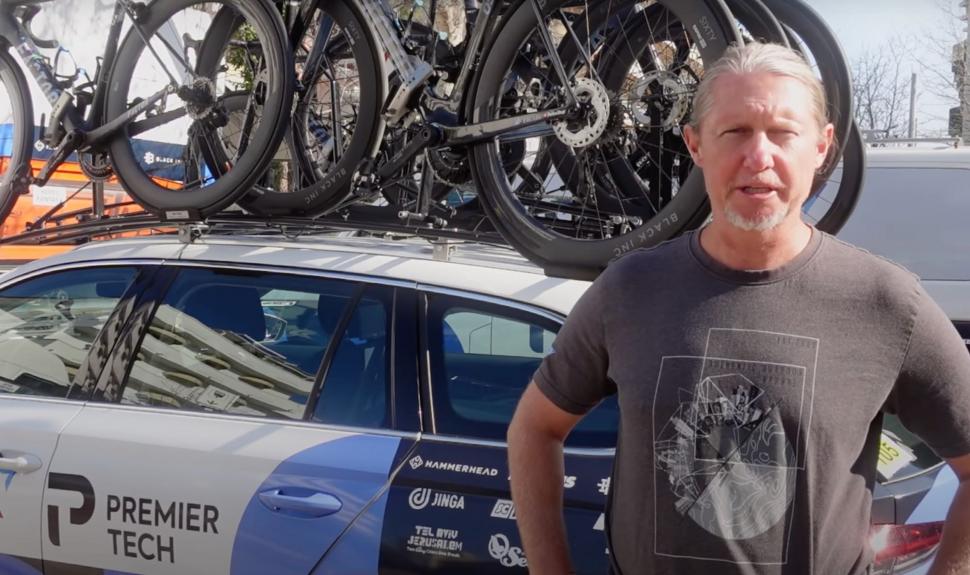 Chris Froome’s mechanic agrees with his boss: “I’m not a huge fan of disc brakes”

Gary Blem says disc brake performance isn’t yet where it needs to be, manufacturers forced the tech onto the peloton, and believes that Froome will reach the top again
by Mat Brett

Chris Froome’s mechanic Gary Blem says that disc brake technology isn’t yet at the level required for professional road racing and that in time Froome will again be “unstoppable” – and, before anyone makes the joke, that’s not a reference to his brakes.

Gary Blem is a mechanic for Team Israel Premier Tech and has had an association with Chris Froome for many years.

In a video posted on Froome’s YouTube channel, Blem says, “I’m not a huge fan of disc brakes. The whole theory for road cycling is that you can brake last minute and, yes, the peloton is doing that. But sometimes the tyres are not adequate to go inside into the corner and you see a lot of crashes in the peloton and most definitely the speeds of racing have gone up a hell of a lot as well.

“The workload with disc brakes is insane. You can get a brake to work absolutely perfect for a normal cyclotourist but for a professional that will hit a 20-30km descent, who’s really heavy on his brakes, by the bottom the rotor is noisy, the pistons are frozen – they’re stuck. Hopefully, with the new 12-speed from Shimano, those problems have been resolved.

“Chris is not a huge fan. There’s the noise factor, it’s not super-reliable, wheel changes are way slower – so I think those are aspects that can improve.

“The biggest thing is the weight factor because now you add 300-400 grams to the bike, so where are you going to lose that weight? Ultimately, you need to lose it on the frame or the wheels. That’s it, which means you need to get super light, once again pushing the boundaries there.

“I think it was more forced by the manufacturers than anything else, and not so much by the riders. This was coming from manufacturers at end of the day.”

Froome himself has made many well-documented comments on disc brakes. Most recently, he complained on YouTube about warped rotors rubbing and described disc brakes as a “work in progress”.

Blem holds similar views and believes that many of the problems would be solved if hydraulic disc brakes featured adjustable pistons.

He says, “If you can have an adjustable piston, already you solve some of the issues because if that piston gets blocked… you should be able to move it enough so that you got some clearance. It’s easy to say it but to do it is a different story.”

Blem likens the introduction of disc brakes to the adoption of electronic shifting.

“Initially we had a lot of problems with electronic,” he says. “It’s just a matter of time, I guess when disc brakes get to that level – but we’ve got to give it time. The hard part is these guys’ careers are continuing so they don’t really have much time. It’s something new and I think people tend to shy away from something new or reject it initially, so we just need to keep an open mind and go from there.”

Blem also reveals that Froome takes a huge interest in equipment and alters his riding position frequently. He says, “I’ve done many tours with him where we’ve changed the position every single day.”

Blem also says that Froome was thinking about dropper posts long before Matej Mohorič used one to help win this year’s, Milan-San Remo.

“What I like about Chris is that he is innovative,” Blem says. “This dropper seatpost that Mohorič was riding – Chris spoke about this ages ago. It’s just about working closely with the manufacturers and getting things like that sorted, but it’s something that he came up with a while back. I think there’s a lot of elements that guys are using today in racing that came from Chris.”

Blem reports that Froome has also been very particular about his saddle in the past.

“The Giro he won in 2018, he had a saddle sore issue and I think we tried seven or eight saddles for him and it was crazy,” says Blem. “He kept me busy. Even after he won the Giro, that evening he said to me – I think it was 11 o’clock at night – Gary, I want to try this saddle when I take my bike with me.”

Blem believes that despite not challenging at the highest level since sustaining multiple fractures while warming up at the Criterium du Dauphiné in 2019, Froome will again reach the top of the sport.

He says, “Many people tend to lose faith but they forget he’s been down and out before and he’s come back and he will do so again, so I’m looking forward to that. I think it’s not over yet. I think Chris is just finding himself again and once he does he’ll be unstoppable again. It’s just a matter of time.”